Sources say that the Milwaukee Bucks are in negotiations to purchase the Journal Sentinel buildings with the intention of constructing a multi-purpose arena on the site commonly known as Journal Square.

According to several sources within the Milwaukee Department of City Development and the commercial real estate community, Milwaukee Bucks co-owners Wes Edens and Marc Lasry are in negotiations to purchase the Milwaukee Journal Sentinel buildings with the intention of building a new arena on the block of land known as Journal Square.

The deal is not complete, but sources familiar with the negotiations say the Bucks ownership group has architectural renderings of an arena which fits within the Journal Square at 333 W. State St., a site that sits between 3rd and 4th streets to the east and west, and State Street and Kilbourn Avenue from the north to south.

A source indicated this is the ownership group's preferred location for a new arena.

Bucks President Peter Feigin referred back to several of his previous public statements that the ownership group continues to explore several locations in metro Milwaukee.

"We are still investigating several viable sites for a multi-purpose facility downtown," he said. "As the process continues, we'll work closely with the community and city to select the best site and ensure that it will bolster Milwaukee's economic transformation."

At the announcement of the Bucks’ move of its business offices to Schlitz Park, Lasry said Tuesday that he knows the site of the new arena, but will not announce it for another 30 to 60 days.

The historic building at 333 W. State, built in 1924, still houses the staff of the Milwaukee Journal Sentinel, which would need a new work space. The former Sentinel building at 918 N. 4th St. is vacant. The block was once the site of the Republican Hotel, where Major League Baseball's American League was formed in 1900.

The paper's printing facilities are in West Milwaukee.

Journal-Sentinel business reporter Don Walker listed the site as one of several potential areas for an arena in an Oct. 25 article, in which Smith did not respond to a request for comment.

In August, Smith told the Business Journal that he felt the Journal Communications buildings were in the development zone, but at that time said the building was not in play.

In July, it was announced that Journal Communications was merging with the E.W. Scripps Co., based in Cincinnati. With the proposed merger, which is expected to close sometime in 2015, the broadcast and print properties would be separated, with the Journal Sentinel becoming the flagship paper of the new print company.

As for the Journal Square site, city and real estate sources say one version of arena layout includes setting the arena bowl below street level, similar to some of the arena concepts for the Sacramento Kings.

The fact that the weighty printing presses were set in the Journal Communications basement and that infrastructure already exists makes it a workable theory, despite the property’s proximity to the Milwaukee River and its swampy history.

An arena that has sightlines to the green space of Pere Marquette Park and the river is appealing to the Bucks ownership group.

Fourth District Ald. Robert J. Bauman said that while he has no direct knowledge of any negotiation between Journal Communications and the Bucks – "I don’t know that specifically, but I’m not surprised – it’s a logical area of exploration for them" – he did say Journal Square makes sense as a location for a new multi-use facility.

"If that site is big enough by itself, then I think that’s a very viable option," he said. "If they have to span 4th Street and also demolish the (UWM Panther) Arena, as well – that’s going to be a big, big political argument.

"From a pure locational standpoint, I think the Journal Sentinel building is a great site. I mean, it is closer to Wisconsin Avenue, it fronts Pere Marquette Park with a view of the river. I think that’s a very attractive location aesthetically. It’s more centrally located than the current facility, granted it’s only a block away, a block and a half away, but blocks make a difference." 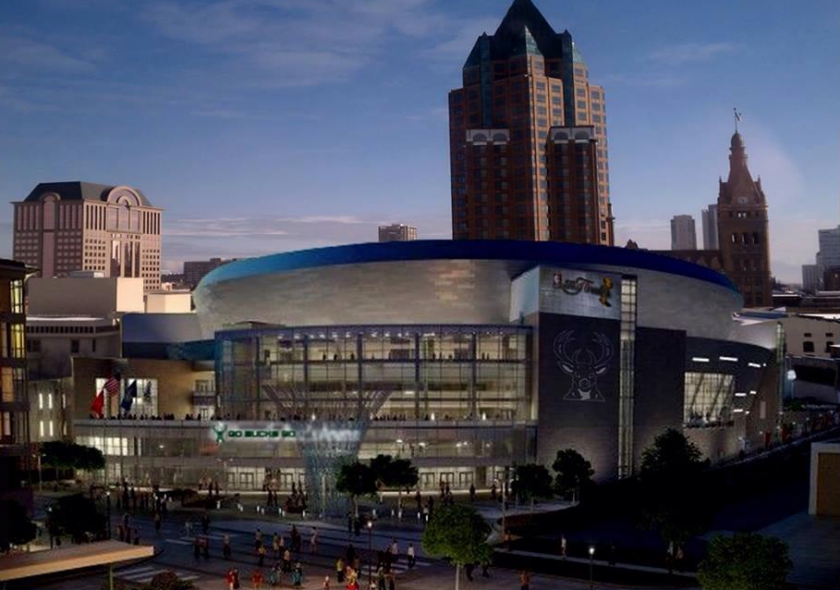 A rendering of what an arena could look like along the Milwaukee River.

But, Bauman acknowledged there are some issues with the site. He’s not sure it can fit a new arena, if the plan does indeed bring the Milwaukee Theatre and the UWM Panther Arena into play, and if there are environmental issues on the site because of its long printing history.

"These guys are very sophisticated real estate investors, I’m sure I’m not raising any points that they’re not already well aware of," Bauman said. "But those would be the things that pop into my mind. But again, I have no specific knowledge if they’re specifically talking to anybody about anything."

Bauman said no one has reached out to him, or anyone else on the Common Council, about this plan.

As negotiations with Journal Communications continue, sources familiar with the ownership's thinking is the site on 4th Street and Wisconsin Avenue remains in the picture, too.

The Park East location north of the BMO Harris Bradley Center is not desirable for the organization. The Shops at Grand Avenue mall was once thought to be a potential site, but New York-based investor Alexander Levin purchased the property through an online auction last week.

The block that currently houses the Milwaukee Theatre and UWM Panther Arena is also an unlikely location considering bonding issues, the likely fight from the Wisconsin Center District, which operates the Theatre, and, as Bauman alluded, political issues surrounding such a historic location.

As for the financing element of an arena as a whole, despite the pledge of "at least" $100 million from Edens and Lasry, former owner Sen. Herb Kohl’s $100 million gift, and a litany of new, local investors into the team, sources say there will be a public financing component to the new arena. Several government sources believe that will likely lead to a state-created organization owning or operating the building with some taxing power.

Depending on the results of next week’s elections, it is possible – if not likely – that the Miller Park tax will be extended and applied to this project.

Major Goolsby’s, which sits on the corner of 4th Street and Kilbourn Avenue, would be directly impacted if the Bucks do strike a deal with Journal Communications.

Owner Pat Murphy, who recently applied for a food and tavern license up 4th Street at Turner Hall, shot down "conspiracy rumors" regarding that application and said, as of now, Major Goolsby’s isn’t closing or moving from its current location.

"This had nothing to do with (that) – this place was vacant," Murphy said of Turner Hall. "We certainly didn’t seek it out. It was just a happenstance.

"It sounds like a good story, but it’s not a story."

Murphy said he has not been in contact with anyone from the Bucks organization, or anyone affiliated with Edens and Lasry, and that his application for the space at Turner Hall was because "it was closed and the people that ran it wanted somebody to come in and run it during the season. It kind of looks bad (empty)."

"I’ll take a flyer on it and go take a look and see if we can do something for at least this season. It’s as simple as that."

Murphy did allow that if Journal Communications does sell the building to the ownership group of the Bucks he’s not sure of the future of the restaurant.

"I don’t know," Murphy said. "I’d have to get to that point and decide what I want to do. I really don’t know."

If that site is not the Journal Communications block – or across the street at the Milwaukee Theatre and UWM Panther Arena  – and instead is at 4th and Wisconsin, several dominoes will fall on 3rd Street.

Four new businesses are set to open – the restaurant Turner Hall, Blue Ribbon at Irish Rec Room, Ale Asylum in the former Molly Cool’s space and a new Suite Nightclub – but if the Bucks leave the area, the owners of those ventures may change their minds.

"Those projects might end," said Jake Dehne, the owner of Upper 90 Pub and Buckhead Saloon who is set to open Suite Nightclub. "They might not happen."

Dehne said neither he, nor his colleagues along 3rd Street, have heard from the Bucks or the City regarding a new arena location, but said a move further south to Wisconsin Avenue will dramatically impact an area that is on the verge of creating new revenue streams and jobs.

Conversely, should the new arena be constructed in Journal Square, it would cement the development plans already in the works on 3rd Street, Dehne believes, creating a more vibrant scene.

"Obviously it would help my business. I would have prime real estate," Dehne said. "And it would probably ensure that for future events that my business would do well. As a whole, I think it helps the area that’s already committed to arena events. Third Street would continue to thrive and support arena events."

– Bobby Tanzilo contributed to this report.