Although Bucyrus sold the building that it long used as a club and cafeteria for employees in 1994, many in South Milwaukee continued to refer to the place as the "B-E Club" or, simply, "The Club." Dec. 18 is the 100th anniversary of its opening.

Although Bucyrus-Erie sold the building that it long used as a club and cafeteria for employees in 1994, many in South Milwaukee continued to refer to the place at 1919 12th Ave., just west of the railroad tracks that bisect the heart of the city, as the “B-E Club” or, simply, “The Club.”

That’s how ingrained the building (pictured at the far left in the postcard image below) was in the experience and psyche of South Milwaukeeans.

Work is currently underway to transform the former factory building – the first in South Milwaukee, which was incorporated as a village the previous year – into a combination banquet hall and South Milwaukee museum. 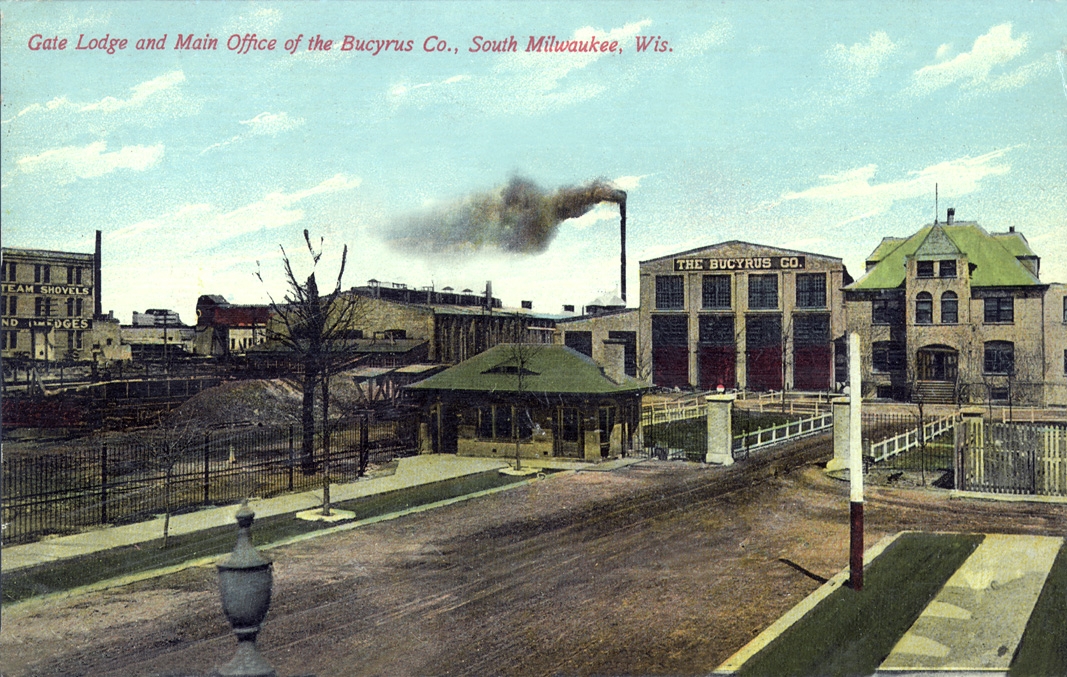 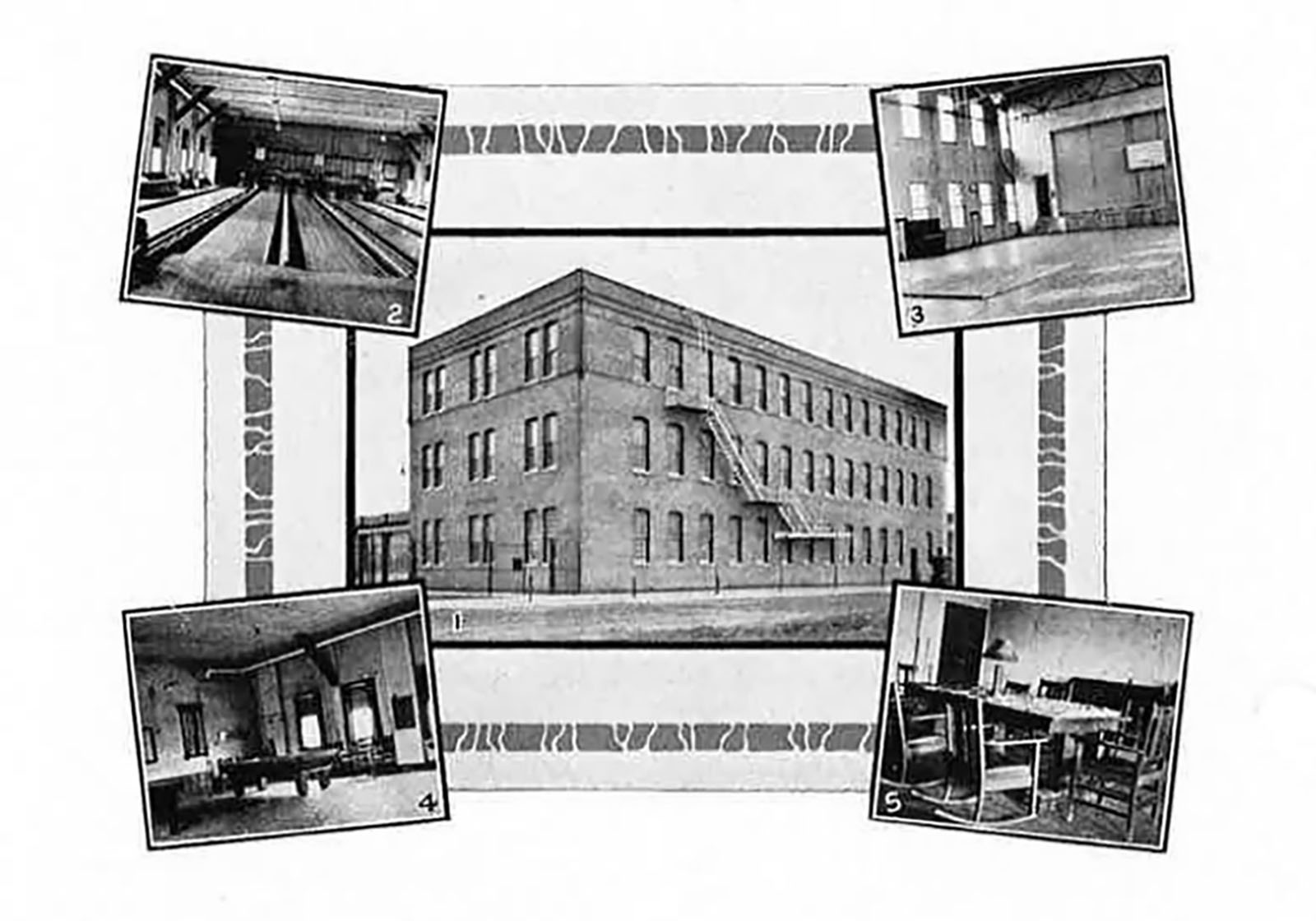 Thanks to a $1.5 million gift from the Bucyrus Foundation, the building will get new life after sitting vacant for a number of years after the pizzeria that last occupied it was shuttered.

Skyline Catering and Bucyrus Club Event Center will occupy the first floor of the building, with a bar and banquet halls, and the nonprofit South Milwaukee Industrial Museum will have display areas on the second floor and some back of house facilities on the small part of what remains of the original third floor. 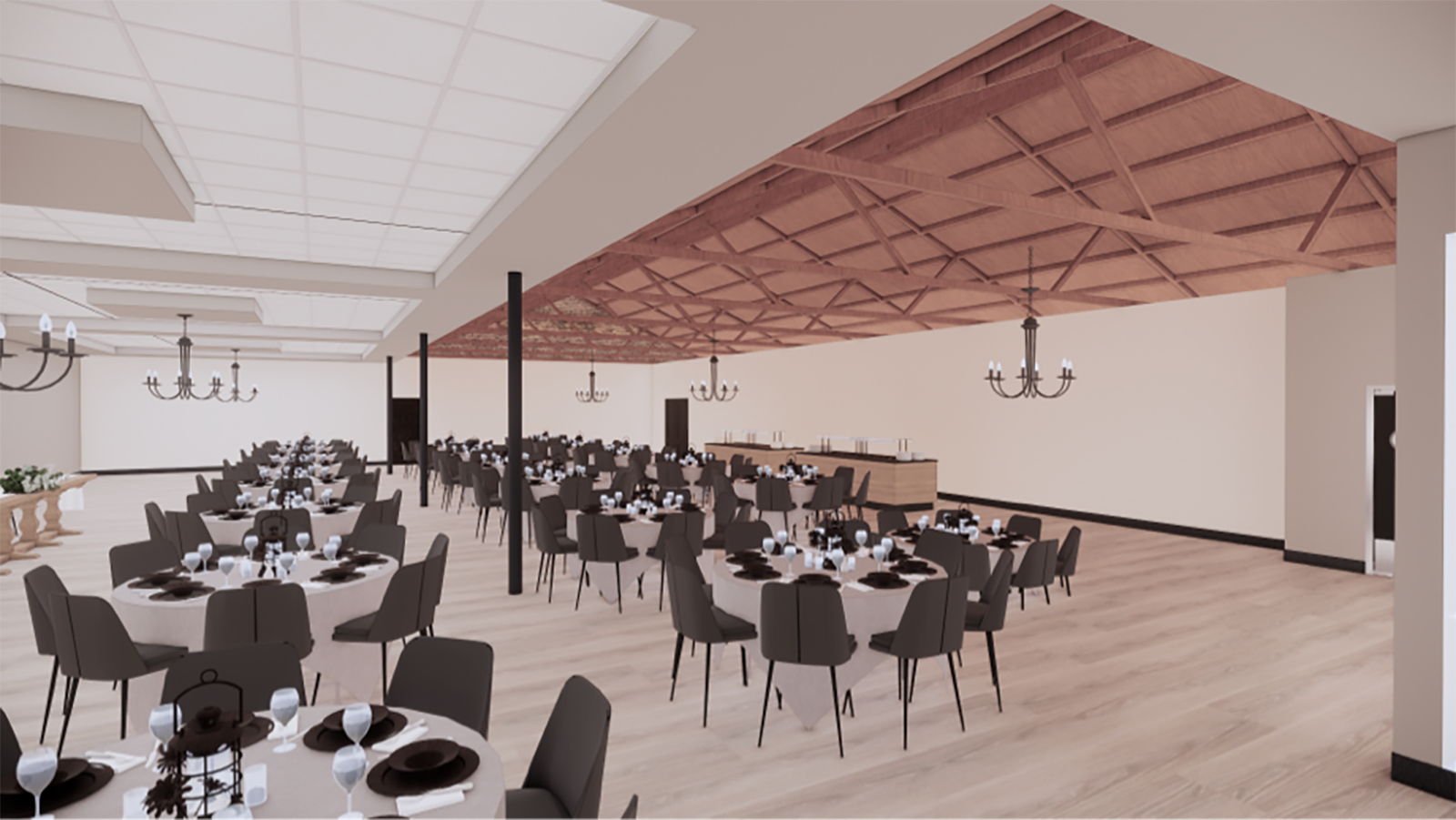 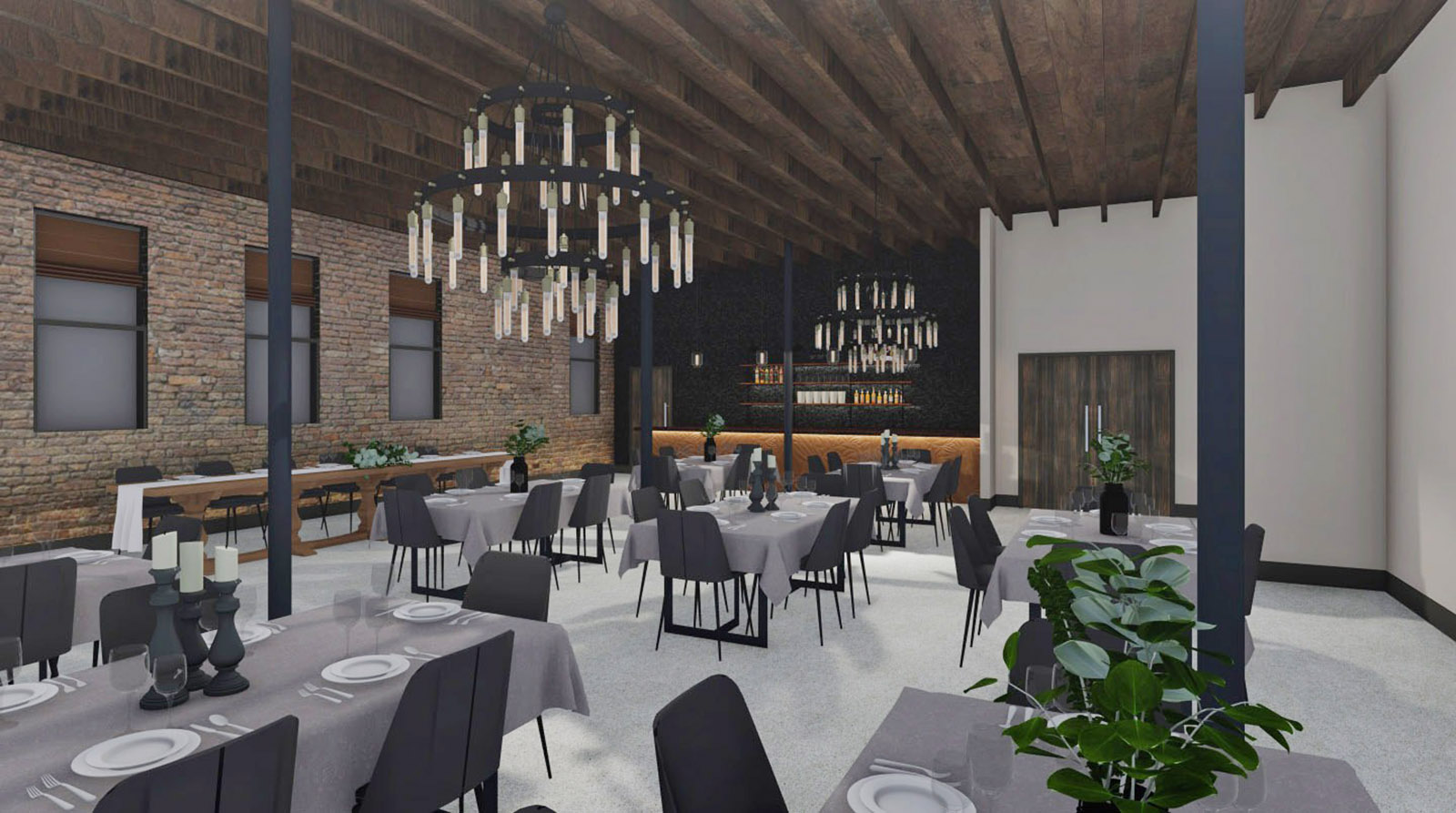 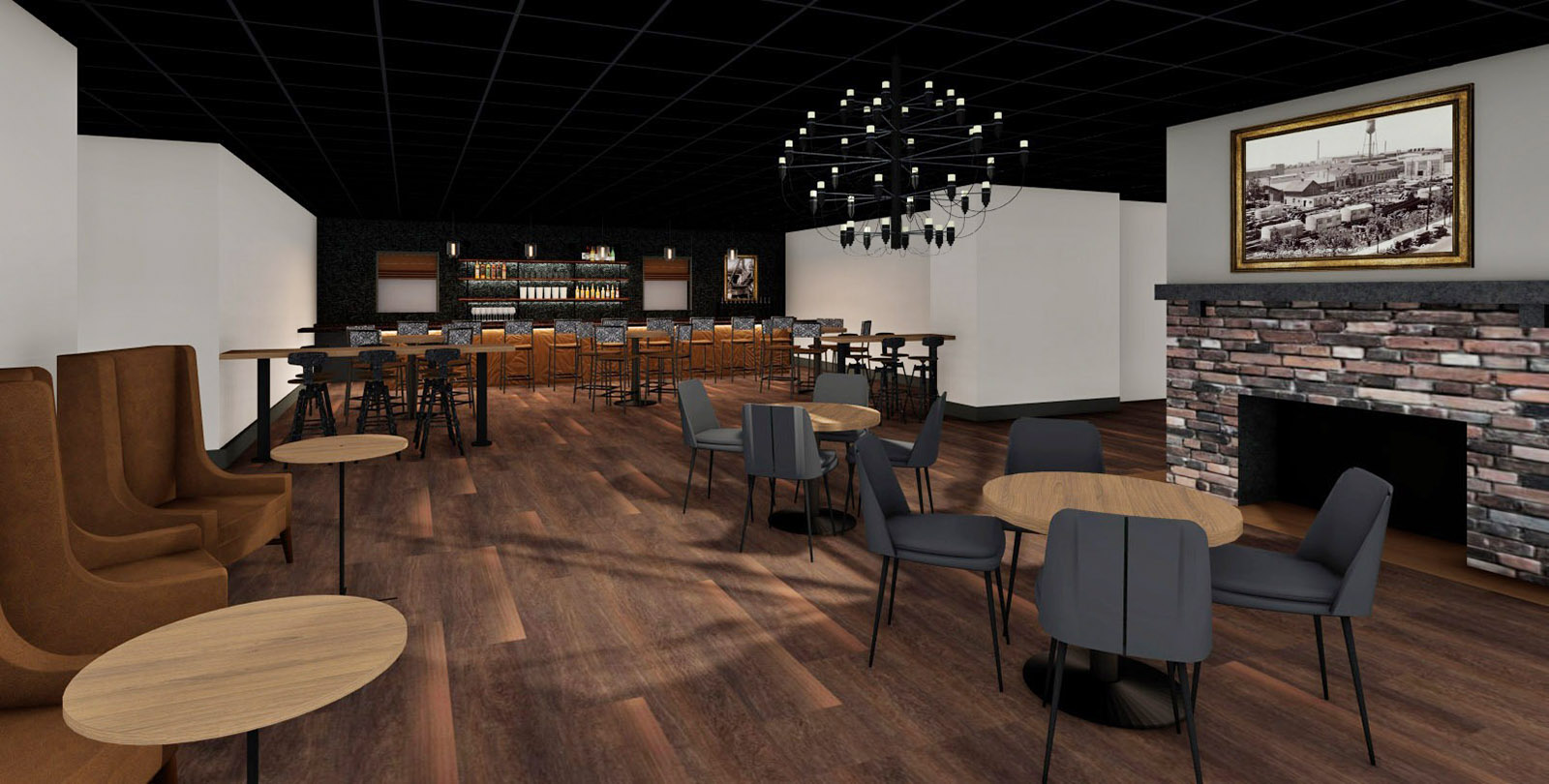 Though initially, the goal was to host at least a partial opening on Friday, Dec. 18 – the 100th anniversary of the original opening of the Bucyrus Club – the pandemic quashed that idea and Skyline is now taking bookings anticipating a spring 2021 opening.

South Milwaukee’s first-ever factory building was put up in 1892 for the Schultz Brothers Furniture Company in the heart of the nascent village, along the railroad tracks and a block north of the train depot. 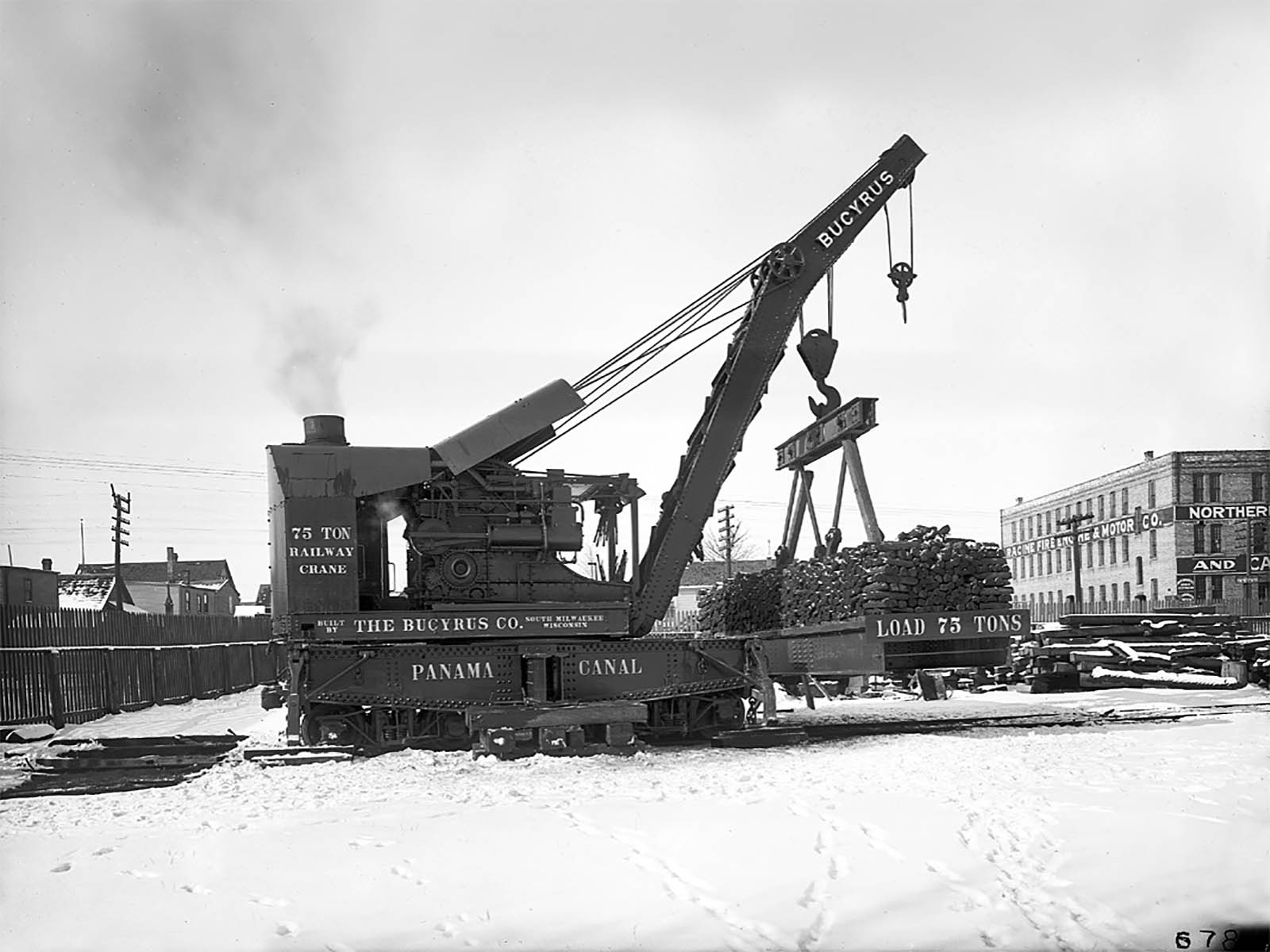 In 1902, it was purchased by the Racine Fire Engine and Motor Company, which made firefighting equipment there, and in 1909 it was sold to the Bucyrus Foundry and Dredge Company, which had been founded 30 years earlier in Bucyrus, Ohio. (Note the Racine Fire Engine sign painted on the building and the steamshovel destined for the Panama Canal in the undated photo above.)

Hemmed in on a small site in its hometown, the company sought a new location and in 1891 it found it couldn’t refuse South Milwaukee’s offer of $50,000 in cash and another $45,000 worth of land, which would turn out to be a solid investment for the still young community. 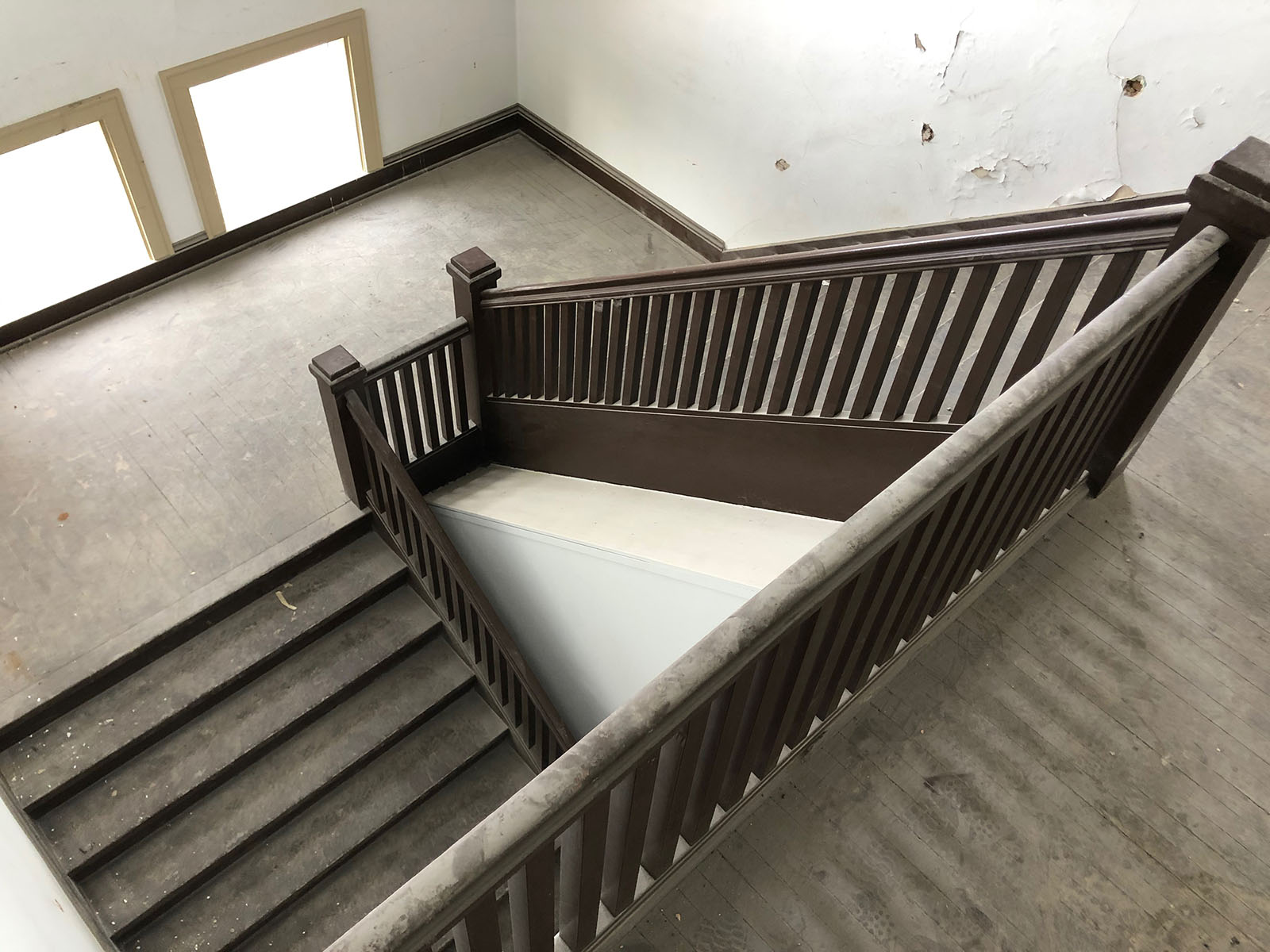 The first Bucyrus buildings in South Milwaukee opened in 1893.

Here, the company made steam engines and steam shovels and some of the massive machines constructed in the 12th Avenue building were destined for Panama, where they helped dig the canal (see photo below).

According to a company timeline, in 1904, Bucyrus manufactured 77 of the 102 steamshovels in the canal zone. 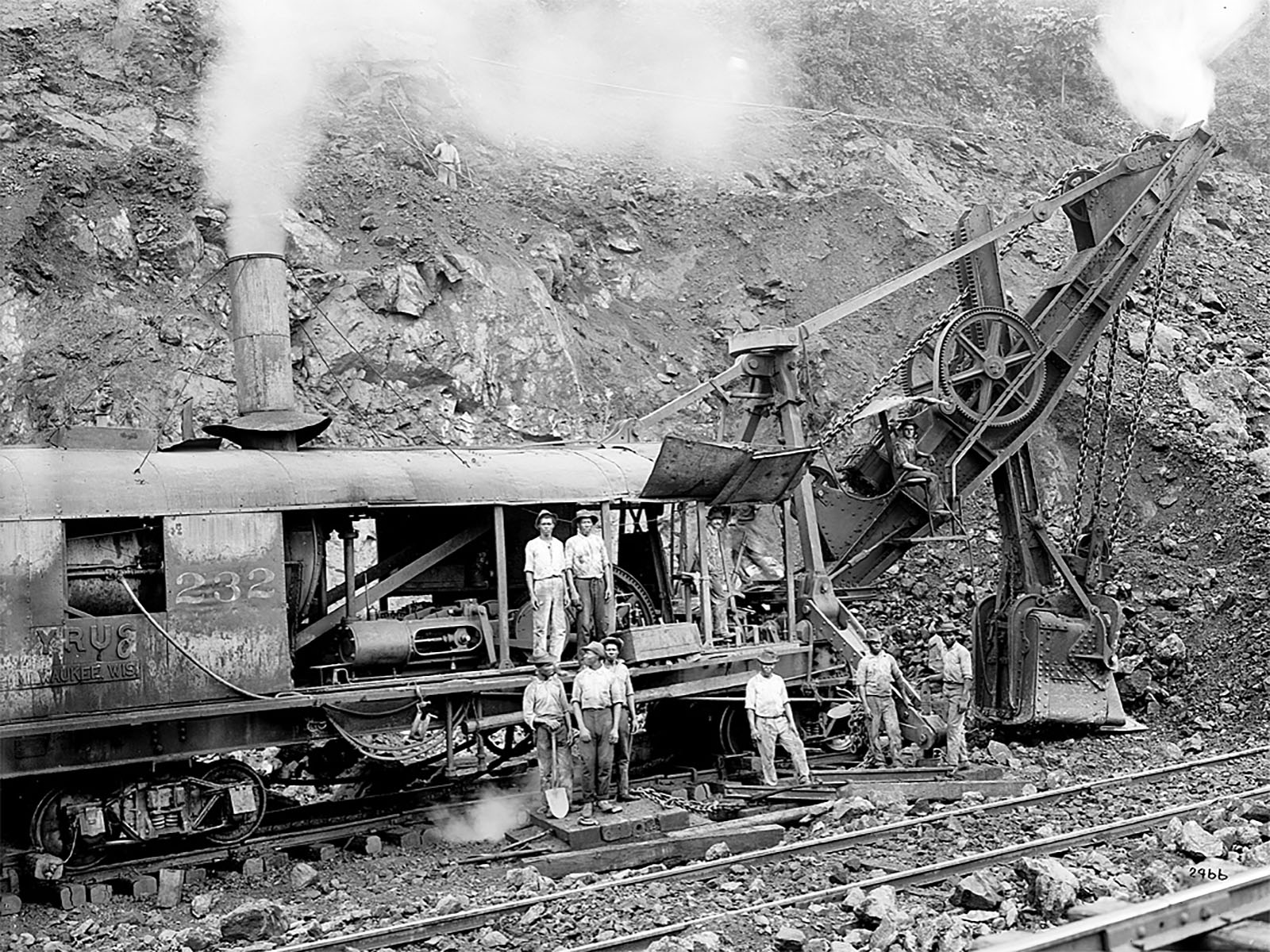 During World War I, Bucyrus produced artillery shells and parts for field artilley weapons, as well as railroad cranes and other equipment supplied to allies in Europe.

According to Bob Jelinek, director of the South Milwaukee Industrial Museum, Bucyrus bought a huge swath of land directly east of the factory and divided it into 30-foot lots, selling them at cost to employees and even providing low-cost mortgages.

“The company helped create South Milwaukee,” he said, adding that it worked hard to lure immigrants to settle in the town to help provide workers.

The company quickly outgrew the small building (which can be seen at the lower left in the above photo) by 1919 and moved to a larger facility across the railroad tracks, converting the old factory into a club and cafeteria for employees. (Executives had a separate dining room.) 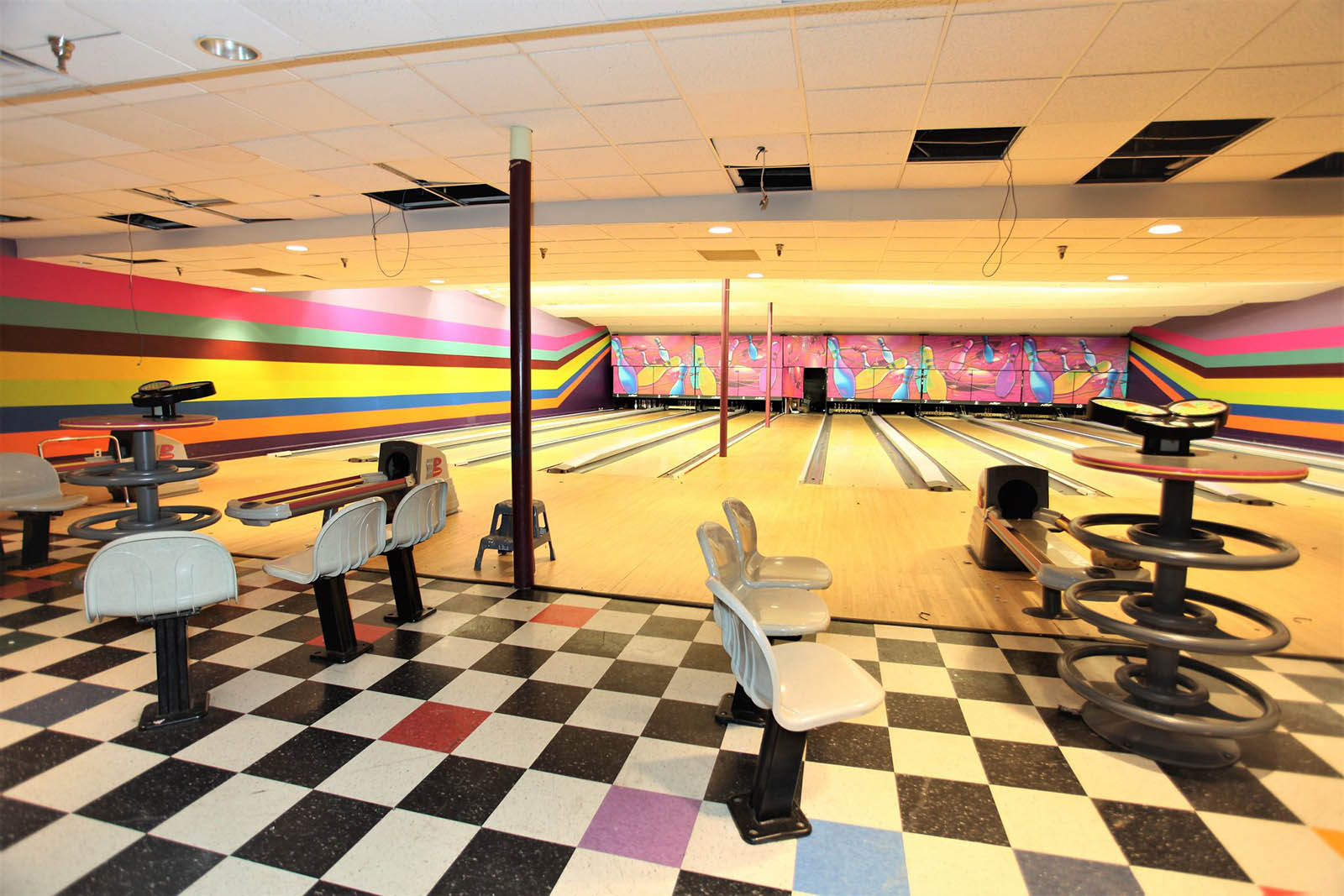 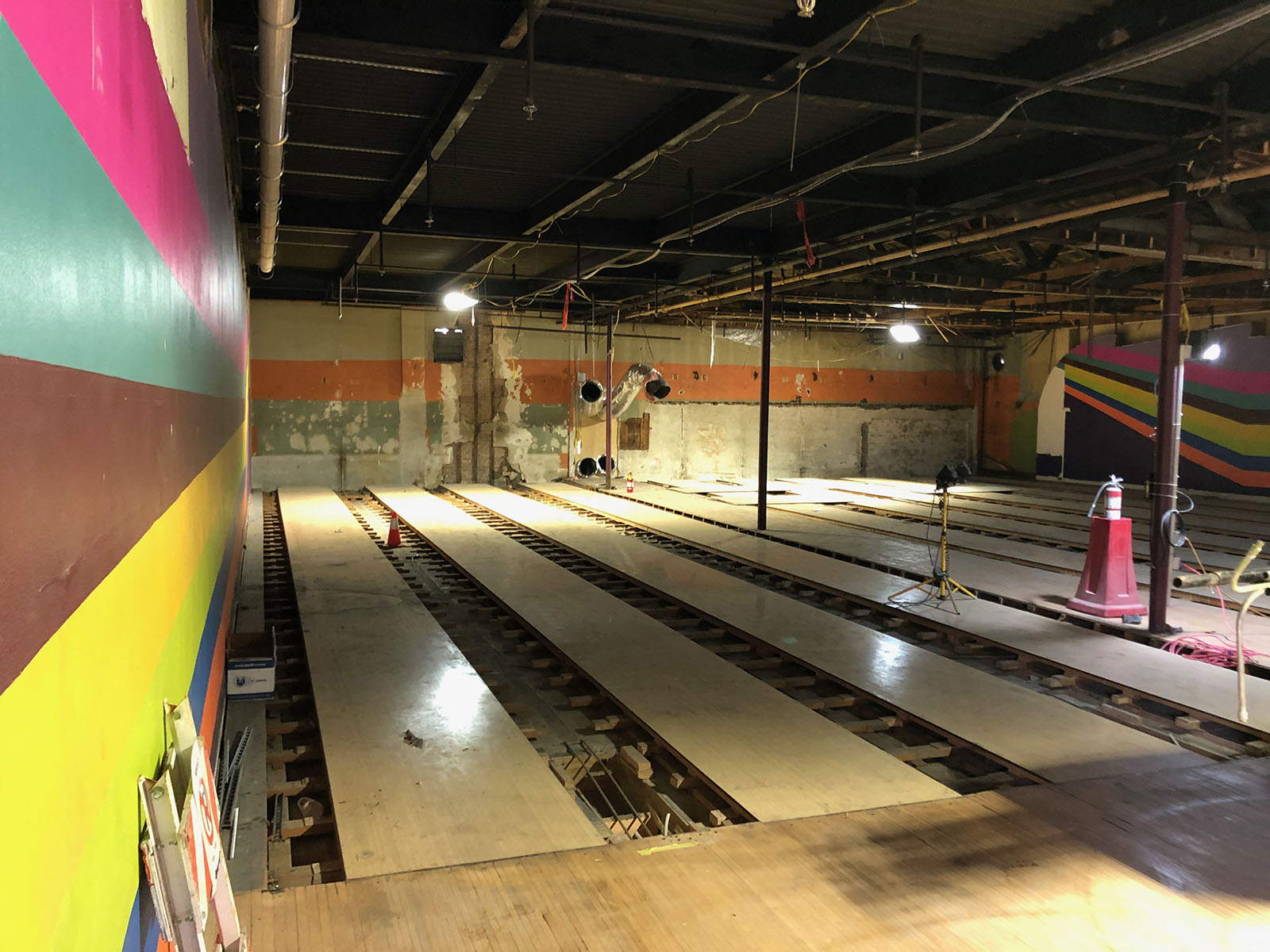 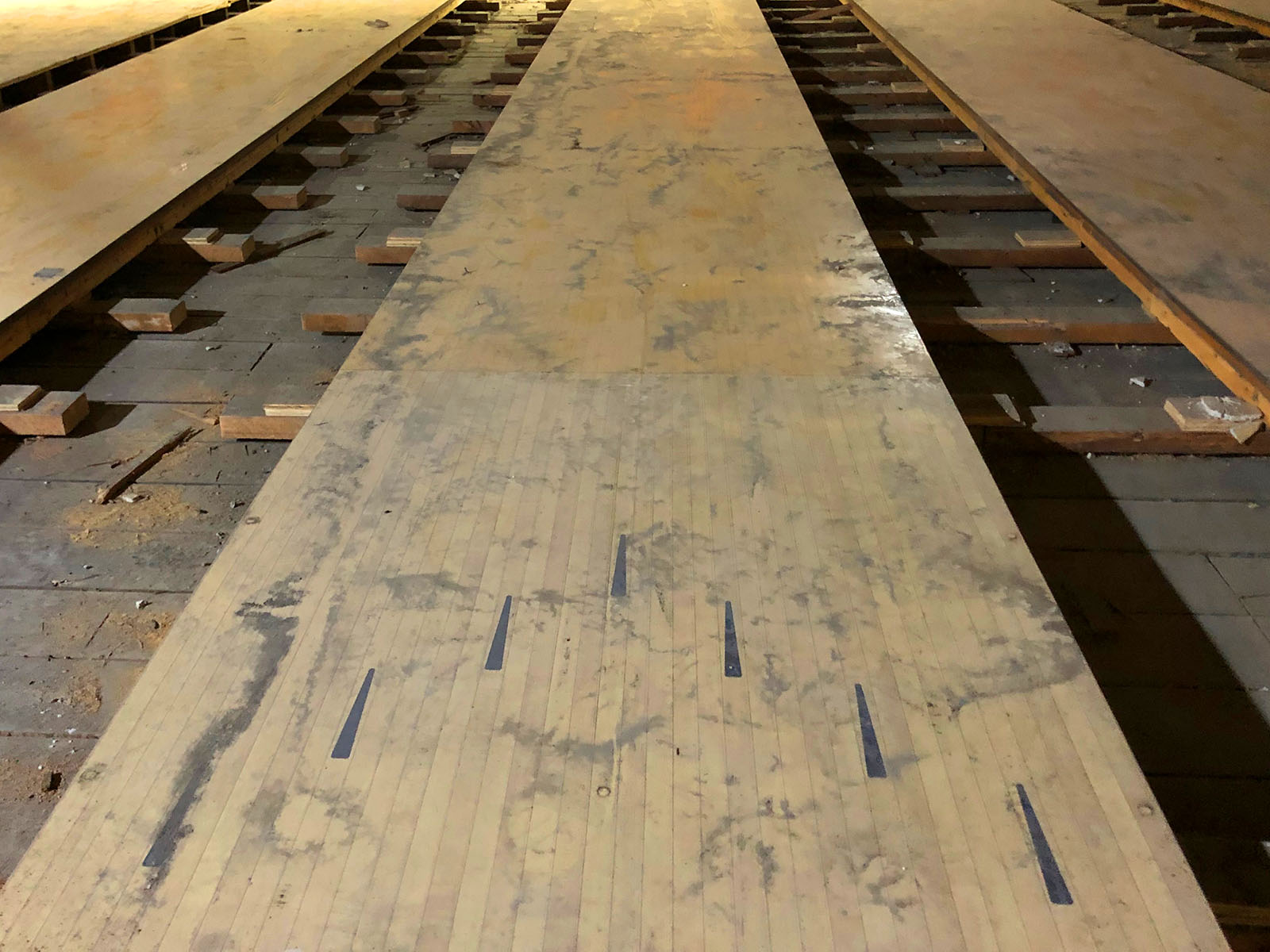 In 1920, it converted a large single-story addition at the back into six bowling lanes and removed part of the third floor – altering the construction to shift the weight of the roof onto the exterior walls – to create a combination gym and auditorium in which the stage could be quickly converted into a handball court. 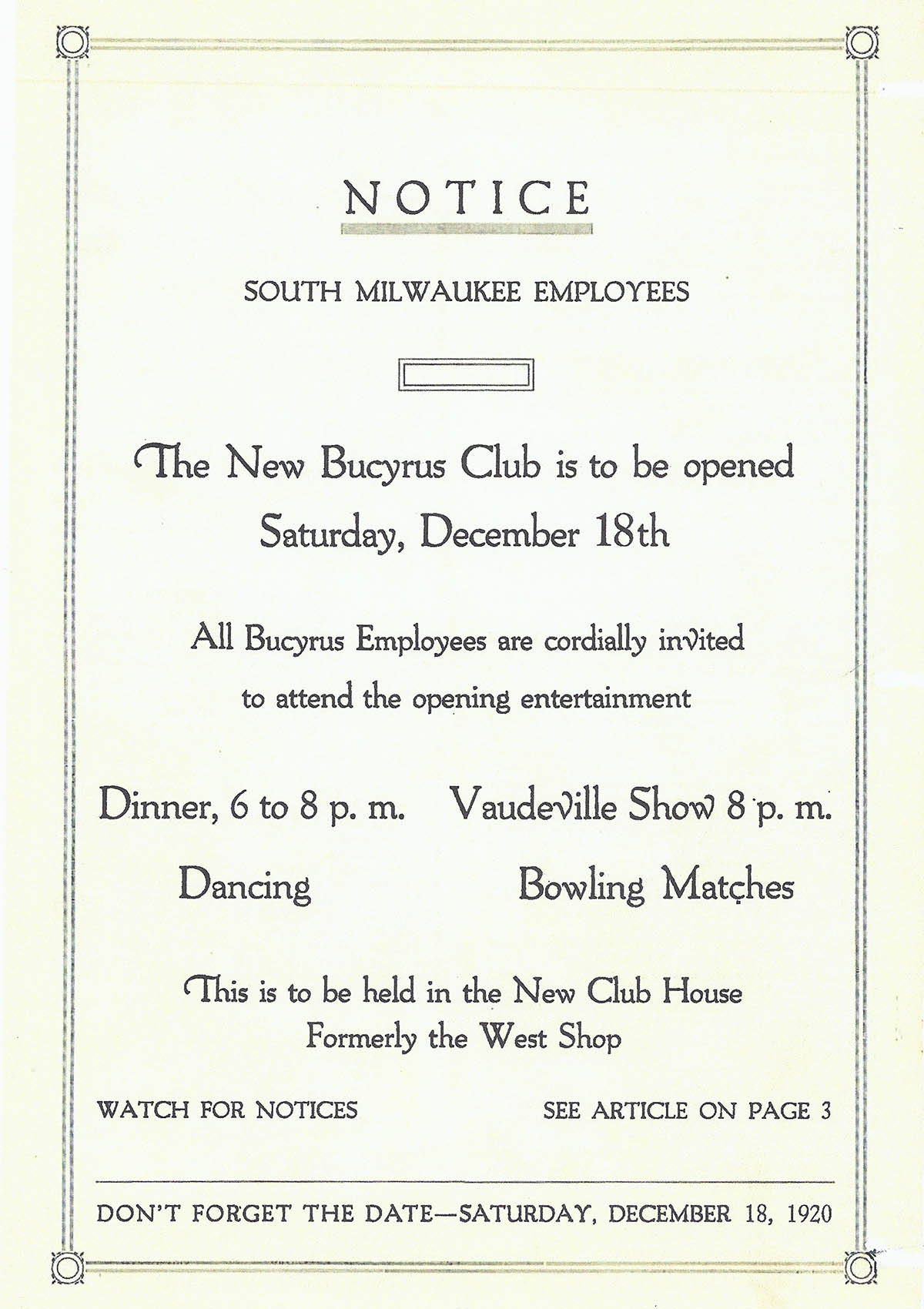 Seven years later, the company merged with the Erie Steam Shovel Company to create Bucyrus-Erie, which would be the major employer in South Milwaukee for nearly 120 years, it’s club becoming a key part of the lives of many in the village.

You’d be hard pressed to find a South Milwaukee family that didn’t celebrate a wedding or a birthday, or attend a high school reunion or an awards ceremony, or even just eat a fish fry and play pinochle there. “The Club” was a major focus of South Milwaukee social life for decades. 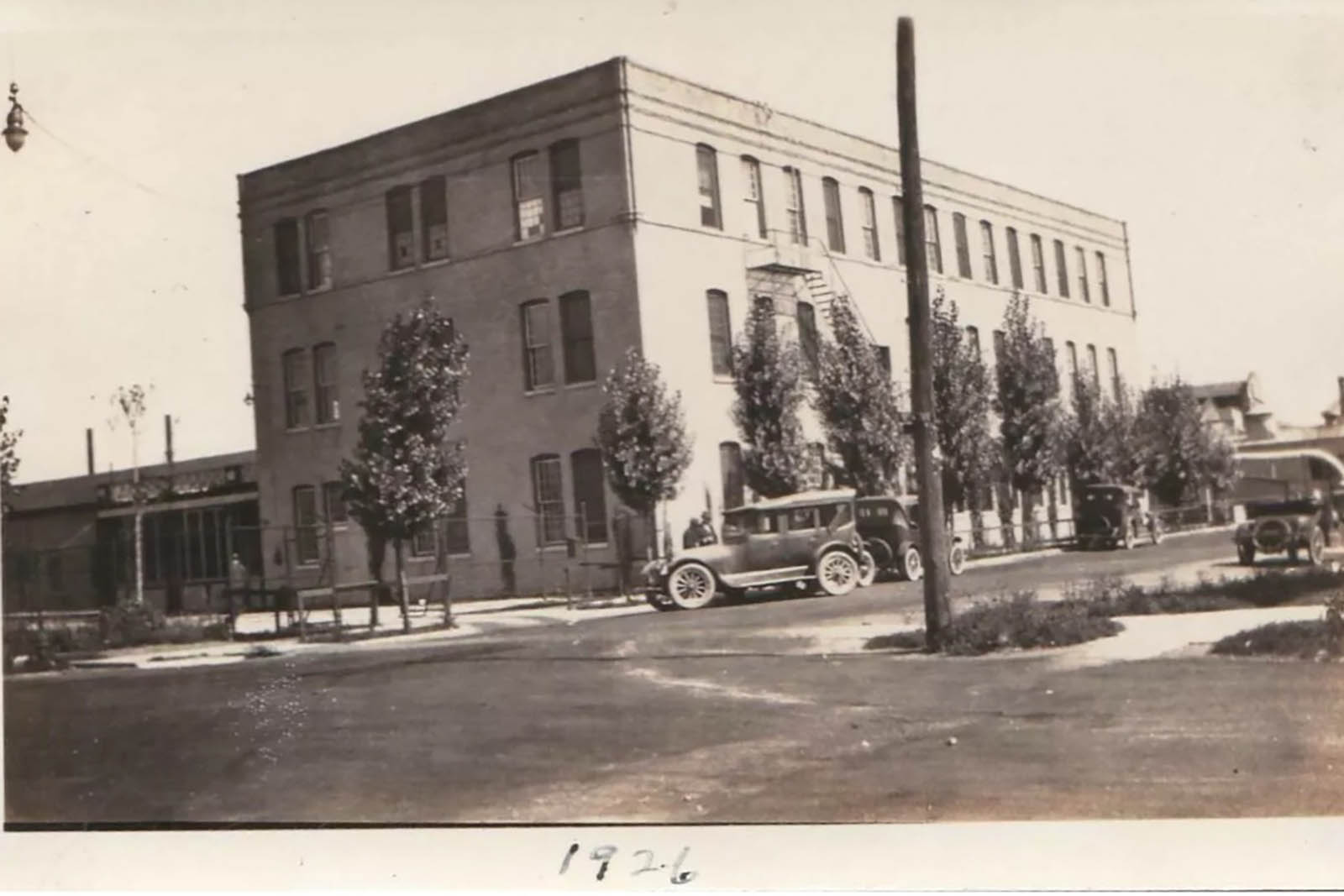 In the 1970s, the low back addition itself got an addition and a bar was installed. Four more bowling alleys were nestled in next to the six already there and they all got new synthetic surfaces.

However, in 1994, Bucyrus-Erie sold the building to the South Milwaukee Lions Club, which converted it into the South Milwaukee Community Center. Eleven years later it was purchased by Sal Purpora, who opened Papa Luigi’s II there. The restaurant closed after suffering water damage in 2014.

Bucyrus-Erie was renamed Bucyrus International in 1997 and was sold to Caterpillar in 2011. The main plant closed in 2016, though Caterpillar still occupies part of the site, says Jelinek, manufacturing parts and a some major components for electric mining shovels. 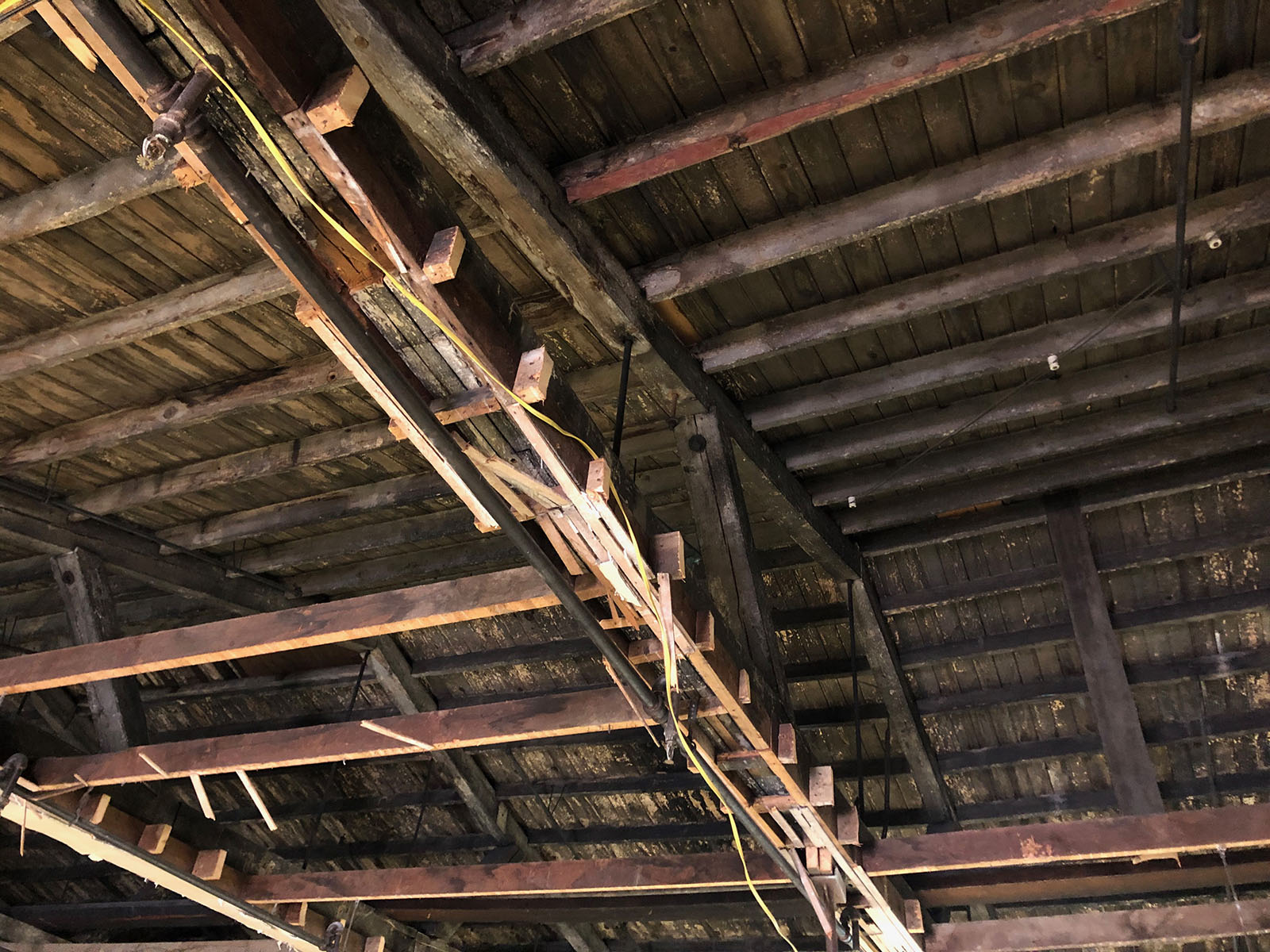 Though Jelinek isn’t sure how many are currently employed there, he says, “they employ only a fraction of the 2,000-plus employees that worked for Bucyrus at the time of the sale to Caterpillar.”

When it opens, the building will be the first permanent home for the museum, founded in 2017, which uses artifacts, photographs, records and more to trace the history, innovation and machines manufactured by Bucyrus. 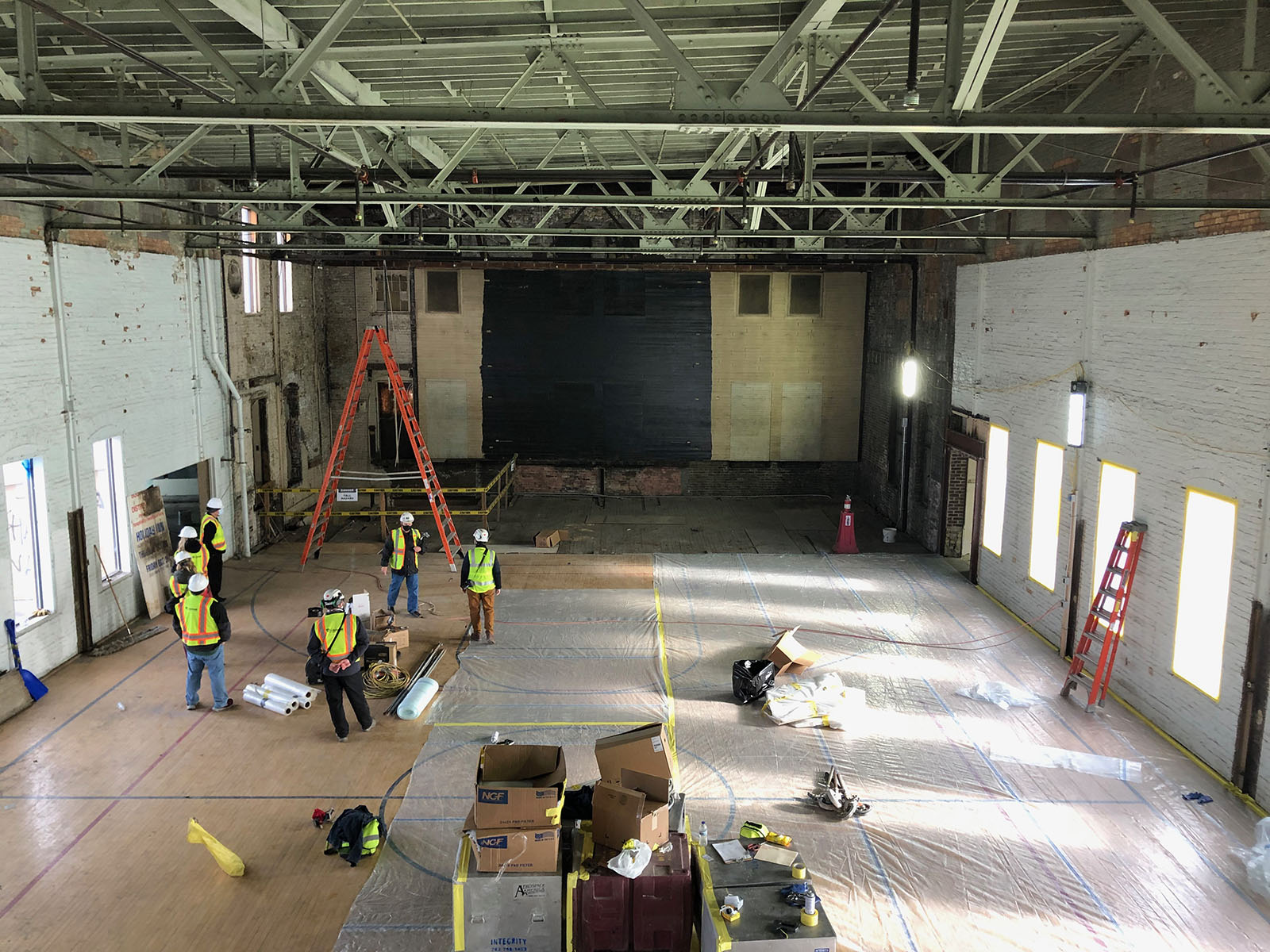 “We think this will become a very unique venue for all of southeast Wisconsin that will allow events to be held in a very historic building with the opportunity for a private viewing during the event of a world class museum,” Jelinek says. 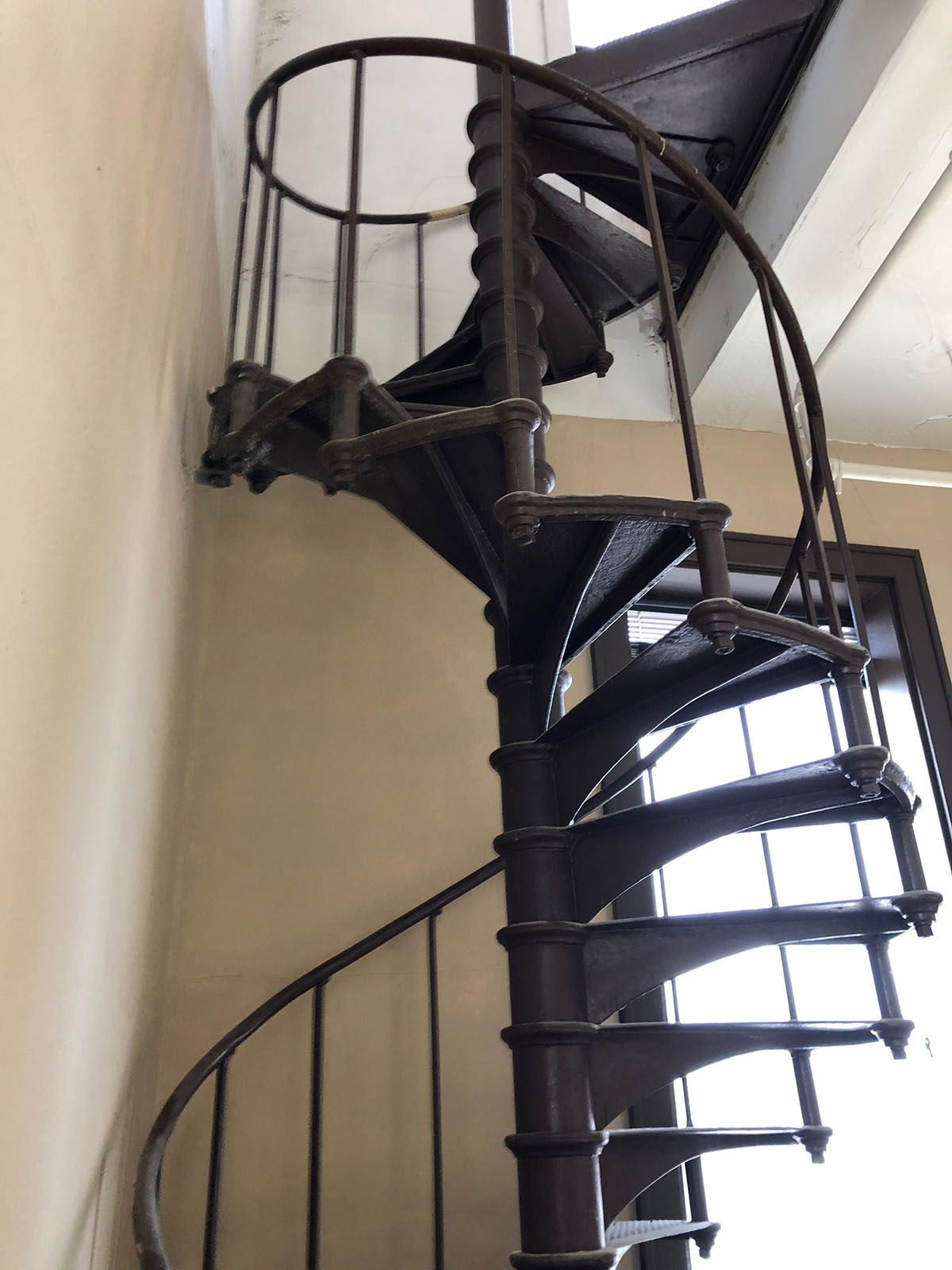 South Milwaukee bought the building in February for $560,000 and the project is expected to cost $3 million all-told. While Skyline will cover the cost of some of the work, the rest will come from tax incremental finance district revenue and economic development grants.

“It’s the job of government not to sit around and wait for development to happen but to help make it happen.”

When I visited this week, the building had basically been gutted, but no finish construction has yet begun. 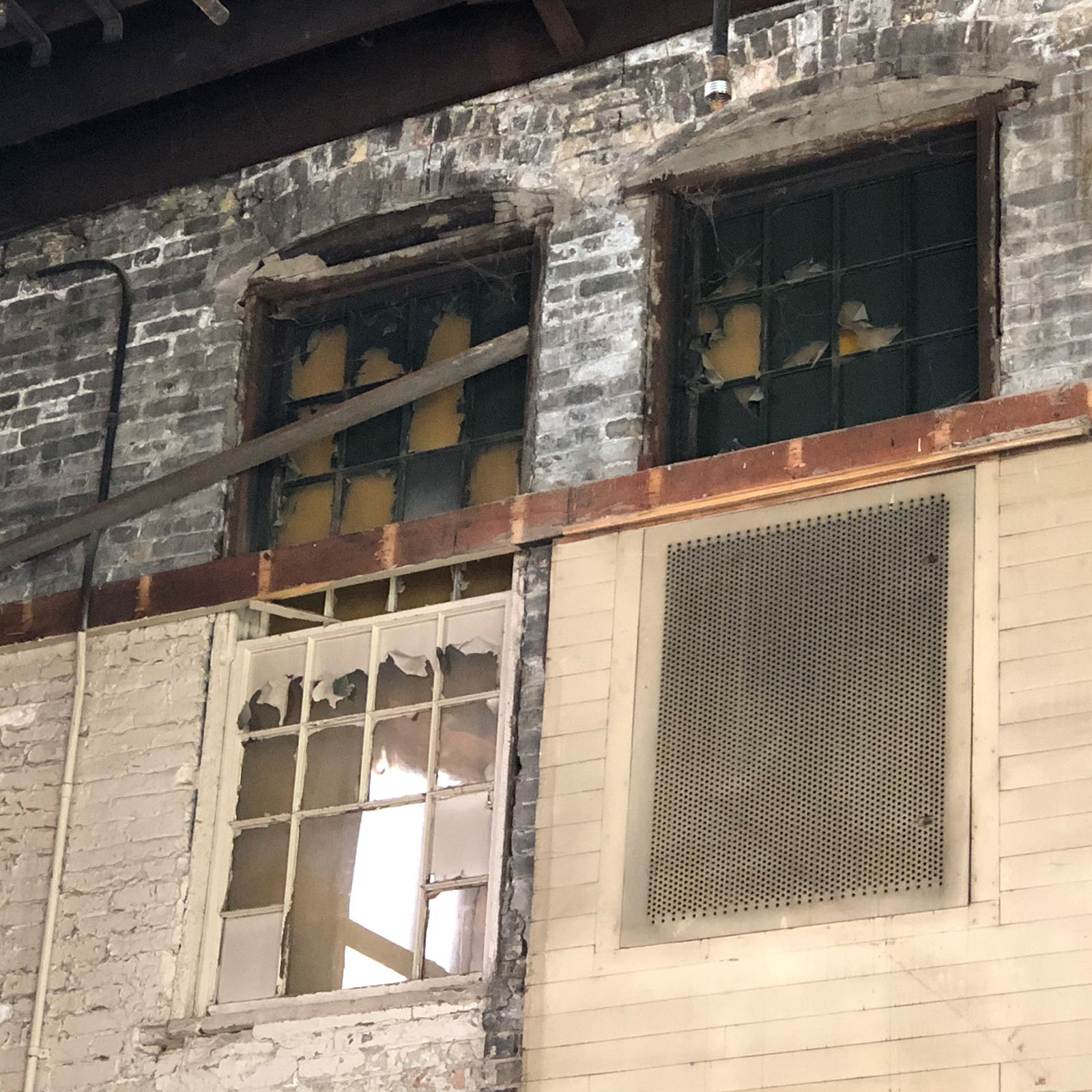 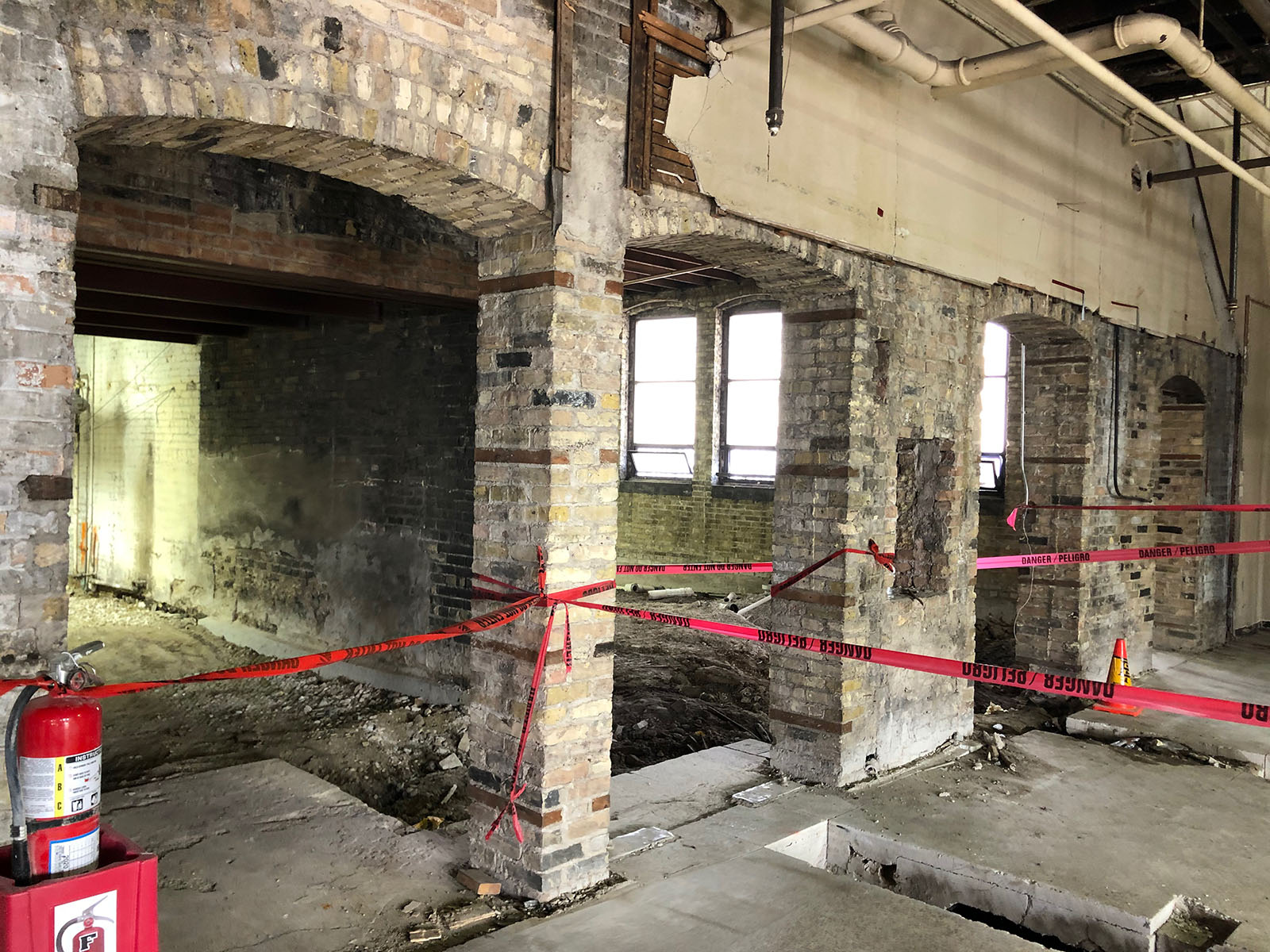 It was pretty cool to be able to see it in this state of “undress,” which offered a look at recently uncovered ghost windows – of which still have their original glass (pictured above, top) – the old former exterior window and door openings (pictured just above) to the north that were covered when additions were made, and even a hidden staircase that was revealed when the stage was removed (pictured below). 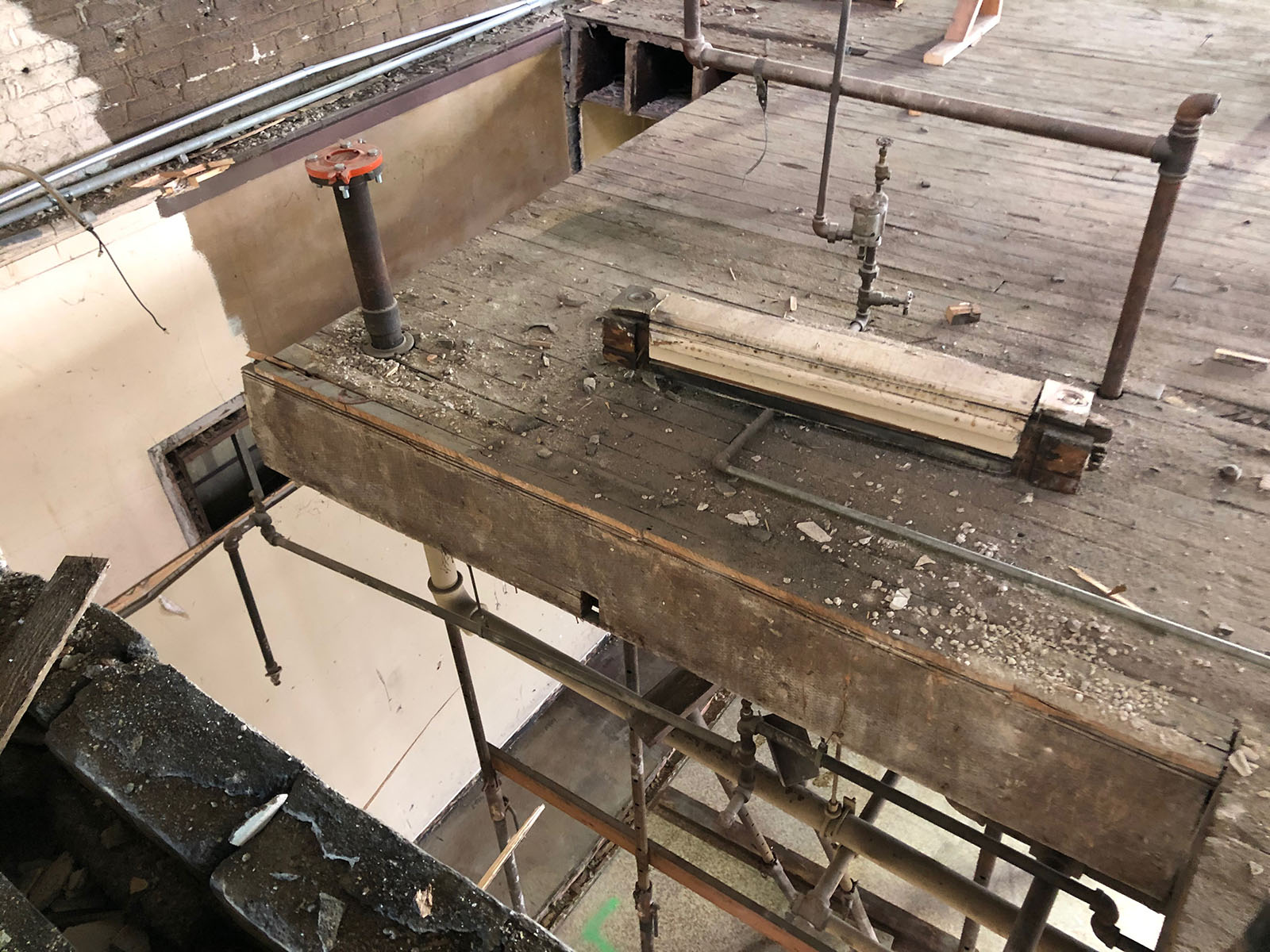 Downstairs, workers from CG Schmidt, which is the contractor on the project, even uncovered – unexpectedly – the steam tunnel that had been used to bring over steam heat generated in a facility to the east of the railroad tracks.

On the main floor, Skyline customers will get to enjoy some of the original terrazzo flooring that will be cleaned up and kept, as well as a fireplace that long warmed a space that served as a lounge adjacent to the 1970s era bar. 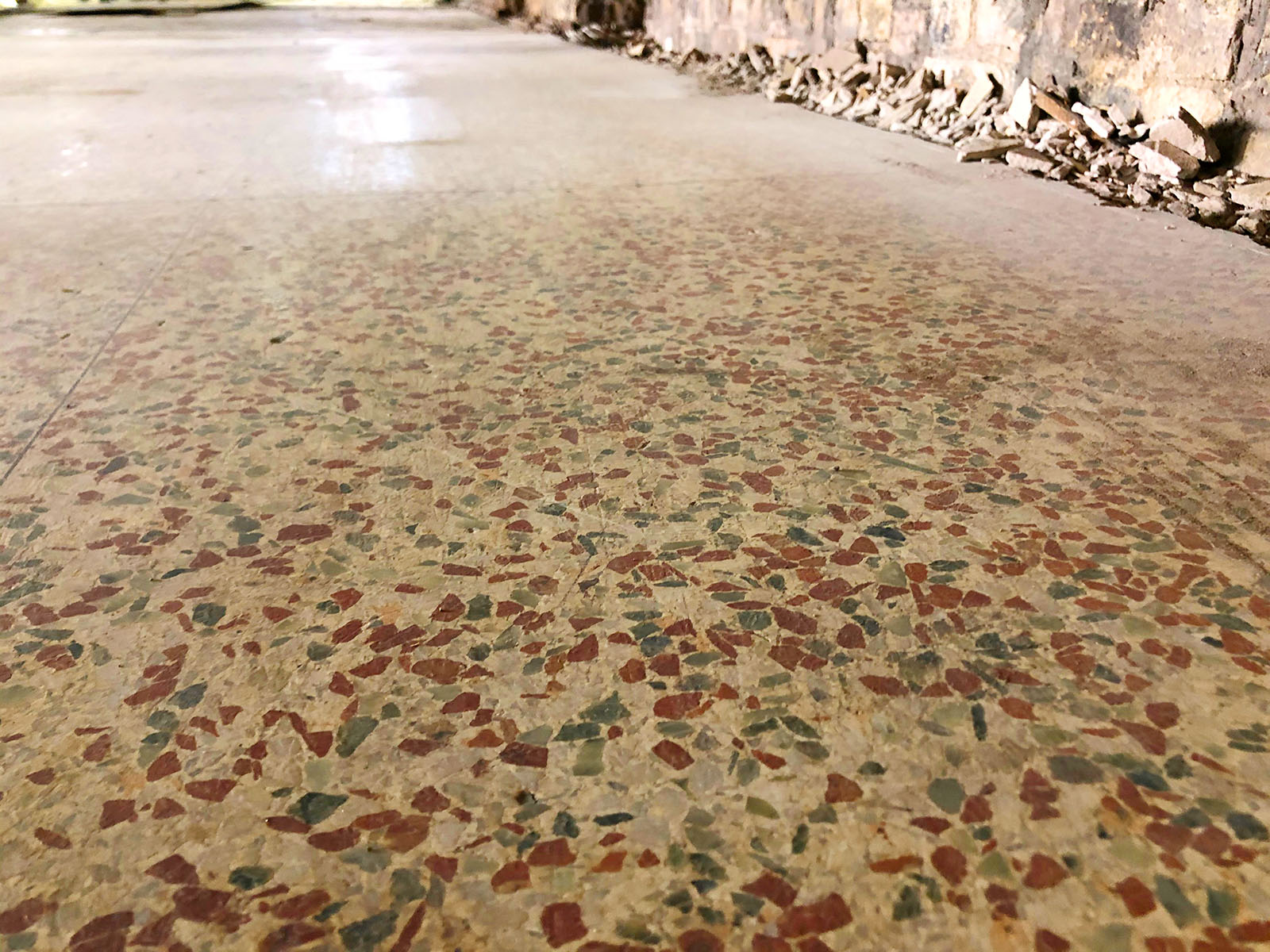 It only makes sense, after all, as project manager and former mayor Dave Kieck says, “this building has played a major role in our community’s growth over the years, and this project has great significance to me as well for several reasons.

“As former mayor of South Milwaukee I am excited to see this project move forward and the positive impact it will have on our community. I also have a personal tie to this building as my grandfather Herman Kieck worked at Bucyrus and was employee #632. My father Theodore Kieck also worked and retired from Bucyrus after 42 years as an industrial engineer. 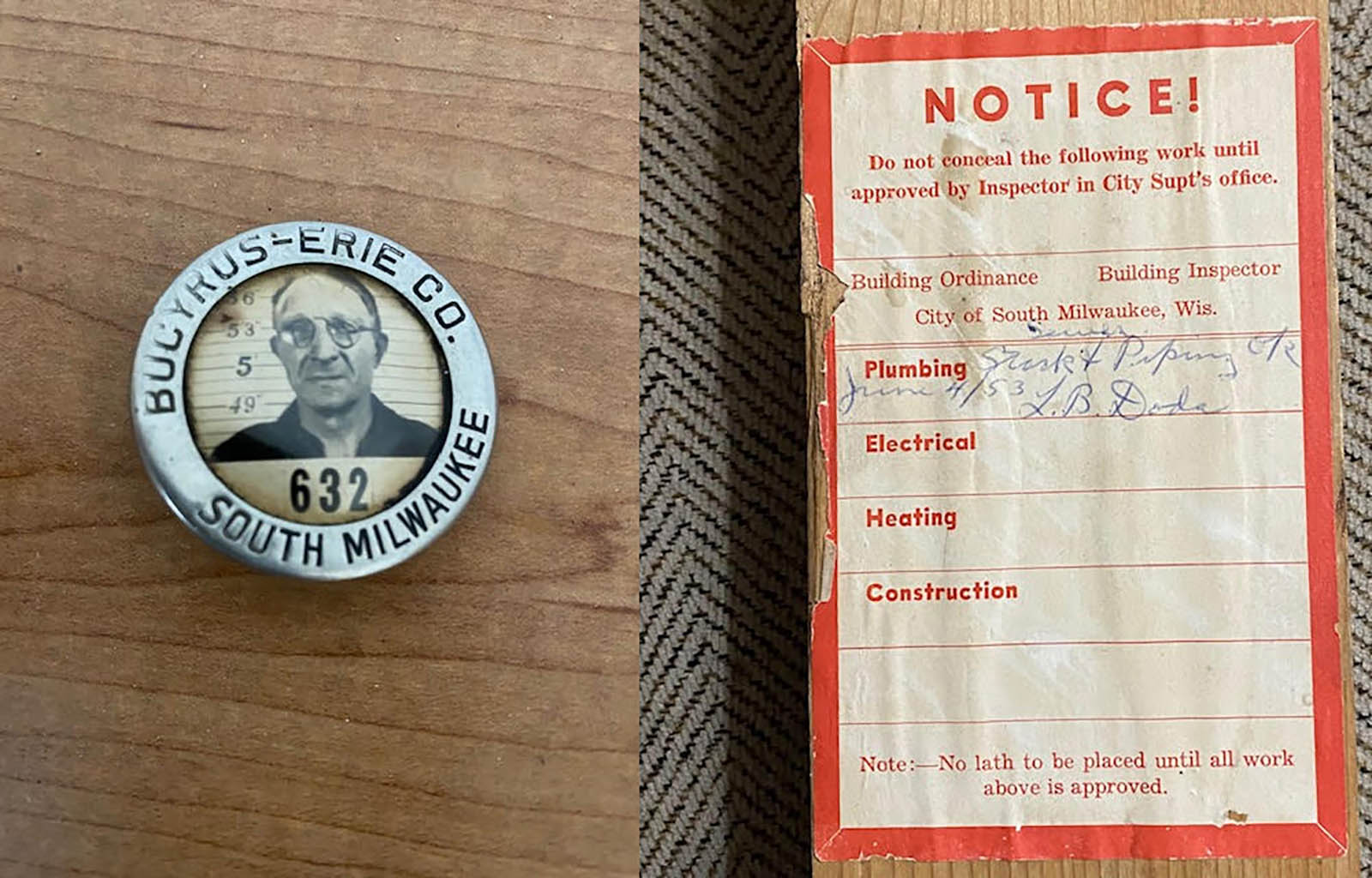 “But one of my biggest surprises came when we were doing demolition and we came across an area which after all the drywall was removed a sticker from the city building inspector was uncovered and the inspection notice was written on June 4, 1953, just three months after I was born, and was signed by the City Building Inspector Leo B. Doda who was my uncle and godfather. And here I am 67 years later tearing down a section within the building he had approved.”

See what I mean about every South Milwaukeean having a connection to Bucyrus? This one resident has no fewer than three!

(Thanks to C.G. Schmidt and South Milwaukee Industrial Museum the vintage images.)