Saturday night was an epic celebration: a completely sold-out house at Anodyne Coffee Roasting, guest appearances and all of it anchored by Buffalo Gospel's traditional, original and incredible country music.

It was an epic celebration: a completely sold-out house at Anodyne Coffee Roasting, guest appearances and all of it anchored by Buffalo Gospel's traditional, original and incredible country music.

Saturday’s festivities were owed to the long-awaited release of Buffalo Gospel’s second album, "On the First Bell." After a week of appearances and interviews, it seemed that the band and its fans were ready for a good, old-fashioned shindig.

It’s not really hard to describe the atmosphere inside Anodyne. It was jubilant. The crowd started arriving more than an hour before showtime. And just kept coming ... and coming ... and coming. It seemed that every Buffalo Gospel fan within driving distance came out to celebrate the new album. It was, in a word, brilliant.

Kicking off the night, Buffalo Gospel brought out Milwaukee underground bluegrass and country legend Joseph Huber. Huber’s old band, .357 String Band, has been highlighted more than a couple times by Kyle Coroneos of "Saving Country Music" as having some of the best underground country music out there.

Since .357 String Band went its separate ways, Huber has been making his own kind of music. Today was the first time I’d heard any of Huber’s music – and I've got to tell you, he’s got a new fan for life. 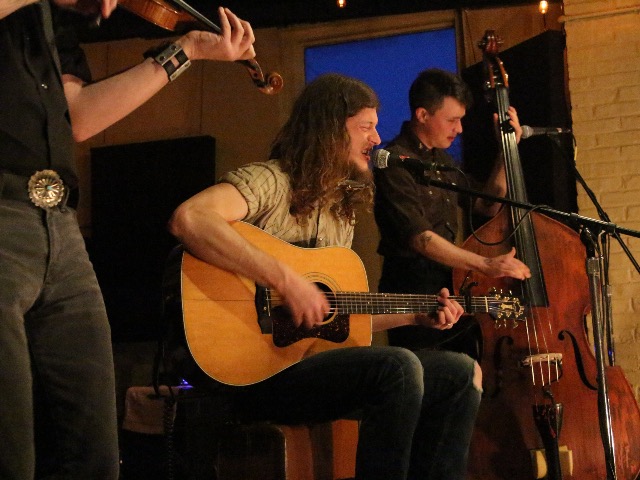 He came out ready to rip and rip he did for twelve songs. Accompanied by fiddler Jason Loveall and upright bass player Eston Eenenett, Huber’s brand of music is a band of underground country and bluegrass seemingly powered by rocket fuel. The energy in the room was intense. He had people singing along, dancing and stomping their feet to some good old-time country rhythms.

Eennett’s bass was super smooth. Just killer. Also, I can’t even begin to tell you how incredible Huber’s fiddle player Loveall is. Think "Devil Went Down to Georgia" on speed. His arm was moving so fast you could hardly see it.

And Huber, well, he was so unusual as to be almost beyond belief. The dude sat on a suitcase – yes, a suitcase. He had a kick drum pedal facing backwards which he played with his left heel on the suitcase. On his right foot, a tambourine was strapped. He also had a harmonica. And played guitar. And sang. Seriously? I can hardly walk some days and this guy is playing guitar, and harmonica, and kick drum, and tambourine, plus singing. What?

Huber’s love of music was on clear display during his twelve-song set. Filled with fiddle and bass and infused with energy, he included old songs and songs from his latest record, "The Suffering Stage." He brought the house down with nearly every song, but especially "The Hanging Road" and "Tongues of Fire." All I can say is that I really, really, wanted more.

But. I also wanted Buffalo Gospel.

They hit the stage after a seriously short break equally pumped and full of life. The guys were decked out in their finest country attire, most of them in cowboy hats. Lead singer Ryan Necci was in polyester – yep, that’s right, polyester. All of it set up to give you the feeling that you were at an old-time country review. They were joined by Haley Rydell, an extraordinary fiddle player who recorded "On the First Bell" with the band.

Buffalo Gospel kicked off with a crazy version of "On the First Bell," the lead-off song from the new album. After that, they jumped back a bit to "Song of the Ox," one of my favorites from the "We Can Be Horses" album, before heading back to "Homeless" from the latest record. The audience loved it, completely.

After three energetic songs, they slowed it down a bit, heading into "She Ain’t Gonna Hold" and "When Lonesome Comes Calling." Necci then paid tribute to Anodyne saying, "This is kind of like our home in Milwaukee and it feels real good." If you’ve never been to a show at Anodyne, you should make it a point to. With killer acoustics and a view from pretty much anywhere, plus a giant bar, it’s a great place to hear music.

Picking the pace back up with "18 Wheeler" and "If I Was the Last Man" – two quick two-steps that make you want to boot-stomp – Buffalo Gospel had the crowd up and moving. To keep the energy up, the guys threw down Vince Gill’s "One More Last Chance" before stripping it back – way back – all the way to one microphone and an acoustical set. They killed it with "Letters to Georgia."

Then Buffalo Gospel started to bring up it’s special guests. Leading them off: Milwaukee’s own Ted Perry. After claiming that he thought a mandolin was a ukulele – though clearly if you follow him on Twitter, you know he plays the mandolin – he picked up the instrument and played "Will the Circle Be Unbroken" with the band. As you can imagine, the crowd ate it up. It was almost mythical.

Next up, Buffalo Gospel brought their original mandolin player, Ryan Ogburn, out to play a beautiful rendition of "Hard Labor Side of Getting On."

After a super funky version with crazy banjo by Michael Rossiter and a gritty "Best Get Fitted," Necci stopped to pay tribute to the man who got the Buffalo Gospel ball rolling, Josh Tovar. Necci said that "this whole night wouldn’t be happening without Josh Tovar." He was "the most humble human and most talented human I’ve had a chance to play music with." Tovar passed away after a long illness. In tribute to Tovar, they laid down a slower, heart-breaking rendition of "Lonestar."

A couple songs later, Buffalo Gospel ended their set ... way too soon. The crowd thought so, too, and brought them back for a two-song encore with Joseph Huber. Just crazy.

They closed with an insane version of "Son of a Gun" with Necci hauling himself up on the kick drum and doing some rocking out of his own – carefully, but still absolutely nuts.

This band. Man. If you haven’t seen them, you need to. If you missed them last night, take heart; Buffalo Gospel will be all over Wisconsin this summer. But you can catch them in Milwaukee again on June 7 for "414Live" with 88Nine Radio Milwaukee.

Make the effort. Buffalo Gospel is definitely worth it.