Has it been a while since you've been to c.1880? If so, you might want to consider a visit. The restaurant just rolled out a brand new monthly "Flights & Bites" menu, which will be available Tuesday through Thursday evenings. And it's pretty delicious.

"Bar Month" at OnMilwaukee is back for another round. The whole month of March, we're serving up intoxicatingly fun articles on bars and clubs – including guides, the latest trends, bar reviews, the results of our Best of Bars readers poll and more. Grab a designated driver and dive in!

Has it been a while since you've been to c.1880? If so, you might want to consider dropping by and taking a seat at the bar for their new Flights & Bites menu.

The restaurant, at 1100 S. 1st St. in Walker’s Point, just rolled out the fun and affordable new pairing menu, which will be available Tuesday through Thursday evenings. It includes a featured flight of unique bites – dishes not available on the regular menu – along with accompanying half-pour wine pairings for just $30 (the price is worth it for the wine pours alone).

General manager and beverage director Joshua Wolter says he’ll choose a themed selection of wines from a different region each month. The wines will vary, based on the accompanying bites, but will always be special selections not normally available by the glass in the $60-70 range.

"The idea here is to give people the opportunity to try something they haven't tried before," says Wolter, who notes that the pairings will change monthly.

I had the opportunity to taste this month’s offerings, which include wines from California paired with three dishes that aptly showcase Chef Thomas Hauck’s culinary style and imagination. 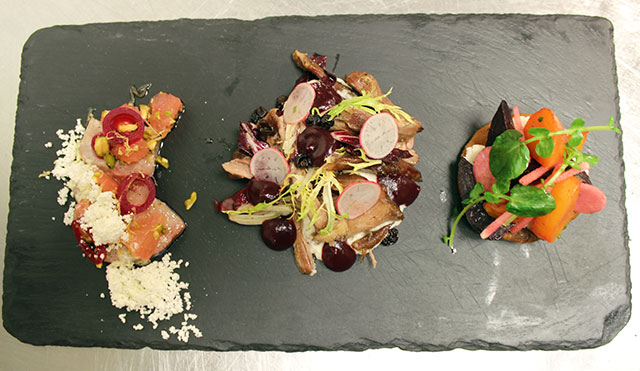 The first dish is fresh hamachi (yellowtail) marinated in grapeseed oil that’s been infused with garlic, pepper, shallot, thyme and rosemary. It’s served with grapefruit and delicately flavored tarragon "snow," that melts on the tongue – but not before imparting its delicately herbal essence. It's served alongside a 2013 Sans Liege Cotes-du-Coast. The wine is a blend of Viognier, Roussane and Grenache from Santa Barbera that matches the dish with a hint of tarragon along with a fresh green flavor and some butteriness. The pairing brings out a bit of funk in the wine, making it a pretty interesting match.

The second is a dish made with Rohan duck that’s been confited and cold smoked with hickory, giving it a rich, robust flavor. It’s served with creamy whipped parsnip and balanced out with currants, cranberry puree and a bit of frisee for contrast. It’s a lovely pairing for the 2014 Ghostwriter Pinot Noir (Santa Cruz), which is replete with tart red berries and a really nice minerality on the finish.

The third rounds out with a fantastically crisp pita that’s been toasted in butter and olive oil and dusted with za’atar seasoning. That’s topped with fresh, creamy Clock Shadow quark and roasted beets. It’s paired with a fabulously interesting 2015 Roark Cabernet Franc (Santa Ynez Valley) that combines rich red berry flavor with a fantastically complex hint of pepper – sometimes green bell, sometimes slightly smoky like a piquillo – on the back end.

Once you’ve finished your flight, if you choose to stay for dinner, Wolters is also offering 20 percent off on any of the featured wines, or other wines from that same region.

I’m still wishing I had stayed for a bit more of that Cabernet Franc (and a bowl of Hauck's delicious soup). But I'm also looking forward to going back to try the April menu, which will feature wines from the Williamette Valley in Oregon.

She said / she said: Happy hour at Company Brewing

On the town in Milwaukee: Reign in winter with happy hour