The new brunch menu (available every day!) at Cafe Hollander is no yolk

Every day is the perfect day for brunch. And thanks to a brand new menu from Chef Thomas Hauck at Cafe Hollander, you can literally enjoy brunch seven days a week.

Every day is the perfect day for brunch. And thanks to a brand new menu at Cafe Hollander, you can enjoy brunch seven days a week.

The new menu follows on the heels of a September trip to Belgium during which Hauck and Lowlands staff explored the scenes in cities including Amsterdam, Brussels, Antwerp and Bruges, eating and researching traditional Dutch dishes.

The result is a menu filled with breakfast staples, a number of traditional Dutch-inspired plates and a bevy of new favorites to try.

Some changes on the menu are relatively subtle. On the potato front, petite french frites have been replaced with twisted brunch frites, curly crispy apostrophe-shaped fries that make great dippers for any one of their house sauces, from basil or lime tarragon aioli to cilantro peanut or Dutch Gold barbecue. Meanwhile, breakfast potatoes have been upgraded to ultra crisp housemade hashbrown patties.

Those looking for a healthy morning kick will be delighted to find a selection of freshly squeezed juice blends and smoothies on the menu. Among the offerings is the Daily Greens which features a tasty combination of kale, spinach, jalapeño, cucumbers, green apples and a hint of pineapple along with On the Beet, a beautiful blend of beets, kiwi and lemon grass. 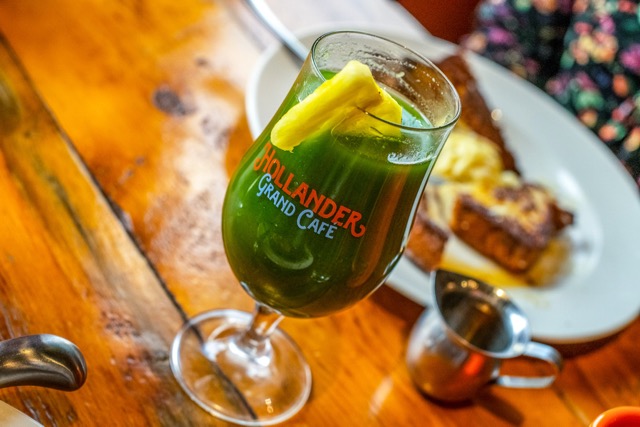 Smoothies come in triple berry and Dutch Indies (a tropical blend of fruits including mango and pineapple). Each begins with a combination of Greek yogurt, bananas and honey.

You can also warm up with Lowlands Blend, a new custom-made coffee from Colectivo which features both robust Brazilian and natural processed Ethiopian, the latter of which offers notes of blueberry. The coffee drinks well at all temperatures, so it’s good from the first hot sip to the more tepid last draw. The coffee is likely to be available for purchase in whole bean bags beginning this spring. 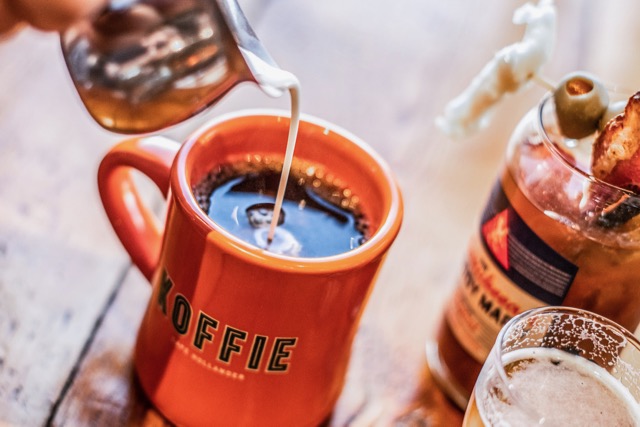 "Lowlands has always been really good in terms of taking thought and care in the products they use," notes Hauck of the changes. "They’ve been careful to avoid things like high fructose corn syrup, and they use quite a number of locally sourced products, including cheese and honey. But, over the past few months, we’ve taken the time to really look at the entire menu and make changes along the way. In some cases it was about breaking each recipe down and looking at different ways of bringing it to another level. Sometimes it was about adjusting technique; but, in a lot of cases, it was simply about using better ingredients."

Ten exhausting days of eating and drinking in the Netherlands inspired numerous new Dutch dishes on the menu, not the least of which is pannekoeken, a thin Dutch pancake (which falls somewhere between a French crepe and an American pancake in thickness) with thin apple slices and bacon cooked into the batter. The cake is then drizzled with housemade apple butter and powdered sugar. 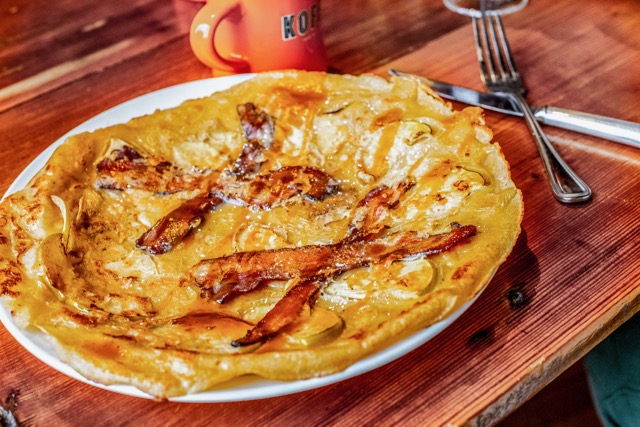 The trip also birthed a phenomenal version of the Dutch Baby pancake, which features a tender, eggy dough that’s perfect topped with something sweet.

"It’s all about method for a Dutch Baby, notes Hauck. "You start with a rippin’ hot cast iron pan, and -- as the batter cooks -- it gets beautifully puffy, with all these mountains, peaks and valleys. It’s a terrific vehicle for apple butter or triple berry jam."

A number of traditional Belgian-inspired favorites -- including Hollander’s liege waffles -- have been given a refresh with toppings like chocolate sauce and whipped cream and housemade triple berry jam.

And if you’re not quite feeling Dutch, but would still like a classic sweet breakfast dish, you could opt for the Toast of France, French toast made with challah and topped with orange ginger honey butter and candied ginger. 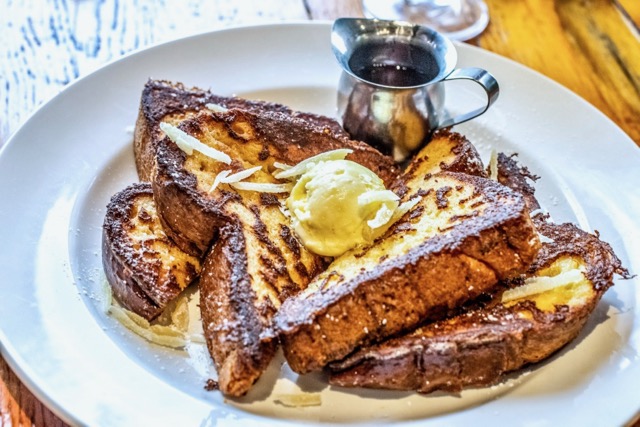 If you love your three-egg omelettes fluffy and beautifully folded in the traditional French style, there are four varieties from which to choose at Cafe Hollander: Hungarian sausage and three cheese; mushroom and gruyere; bacon, feta and spinach; or the It’s No Yolk, an egg white omelette with Brussels sprouts, pearl onions, kale, blistered cherry tomatoes and goat cheese. Each comes with hashbrowns and multi-grain toast. 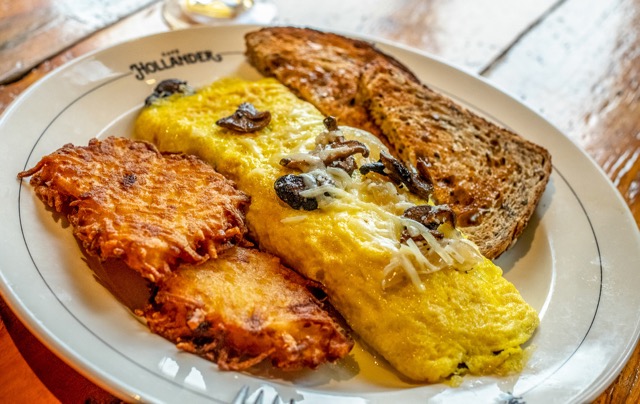 There are also Sweet Potato Noshers, an ode to a dish that once served at The Coffee Trader when it was open just across the street. The dish features garlic shallot butter roasted sweet potatoes, poblano peppers, pickled pearl onions, Hook’s three-year aged cheddar, High Speed Wit bier cheese sauce, Sriracha roasted cashews and a sunny side up egg. 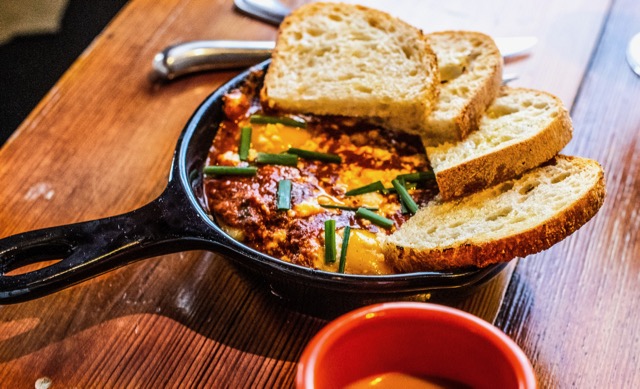 There are also Benedicts and beignets and a new Hollander classic, the Wafflebrown, comprised of hashbrowns cooked in a waffle iron until crisp. Get it smothered with bacon, fried pickled jalapeños, High Speed Wit bier cheese sauce, white cheddar, pickled pearl onions and an over medium egg on top.  Or try it topped with buttermilk fried chicken, shallot garlic butter and a champagne honey gastrique.

Then again, you’re feeling a bit more of a lunch vibe, look no further than the Handhelds section of the menu, which features a number of sandwiches that are both delicious and well-executed. The Pretzel Breakfast Sammy features a pretzel roll made by Milwaukee Pretzel Company. 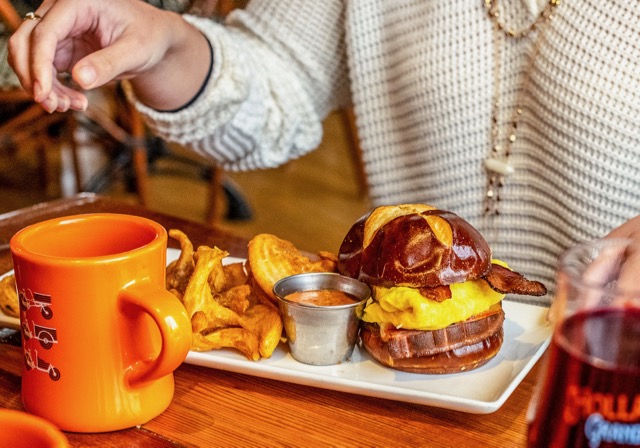 A number of others rely on a soft, yeasty potato roll that was custom made for Hollander by the folks at Troubadour Bakery.

"We literally worked with them to get the bread perfect," says Hauck. "And when you start with great bread and then put really good stuff inside, a great sandwich becomes easy."

Among those great sandwiches is the Dutch Cowboy, featuring six pepper seasoned steak, gleaned from the tender teres major muscle located just below the shoulder blade on the cow. It’s tender and beefy with a bit of a kick. That’s topped with soft scrambled eggs, fire-roasted guacamole and house Noord sauce.

Noord sauce is a slightly zippy variation on Russian dressing that Hauck says was inspired by an area on the north side of Amsterdam that’s been transformed from an industrial up-and-coming neighborhood into one of the area’s most interesting creative hubs.

"You have to take a ferry to get there…" says Hauck. "It’s really this amazing hippie squatter village with a really cool industrial vibe. It’s a haven for arts and artists. And our Noord sauce is just like the area. It’s off the beaten path and a little edgy."

Moving forward, Hauck says, they will be rolling out a number of featured specials for brunch. Guests will also begin to see subtle changes passing over the breadth of Hollander menus, including both lunch and dinner.

Stay tuned. Changes are also in the works for other Lowlands venues including Cafe Benelux and Cafe Centraal.