A generation or two of Milwaukeeans might know the melody to the old advertising jingle for Milwaukee's northwest side Capitol Court Mall, which opened in 1956 and closed and was demolished at the dawn of the 21st century.

A generation or two of Milwaukeeans might know the melody to that old advertising jingle for Milwaukee’s northwest side Capitol Court Mall, which opened in 1956 and closed and was demolished at the dawn of the 21st century.

(See vintage photos and read more about the history of Capitol Court here.)

We got to hear the catchy ditty recently when Paul Dorobialski shared it on Facebook’s Old Milwaukee group recently.

The jingle, which likely dates to the late 1950s, is one of eight on a 7-inch 45 rpm record in Dorobialski’s collection.

You can hear the jingle here.

The record, on the Universal Recording Corp. label from Chicago – and tantalizingly notated as being “Record # 3,” which means there’s more! – lists versions like a March, a Celtra, a Waltz, and Ragtime, Polka and Dixieland versions. Some have vocals, others are instrumentals.

“It and other advertising records came from the estate of the late Gerald Clouser,” Dorobialski tells me. “Jerry was a broadcast engineer and theater projectionist i met in 1977. Jerry worked for WXIX-TV (channel 19), and radio stations WEMP and WFMR.

“Jerry passed in November 2010. He was born on 12/31/1932, a New Year's eve baby. I had the job of cleaning out most of the estate with little help of his half brother. There was also a storage locker on West Layton Avenue and South 13th Street to clean out, too. I pulled 13 pallets of stuff from that storage facility in one day.”

Universal Recording Studio – noted on the record label as being at 46 E. Walton St. on the edge of the Gold Coast neighborhood – was a landmark business in the American recording world. 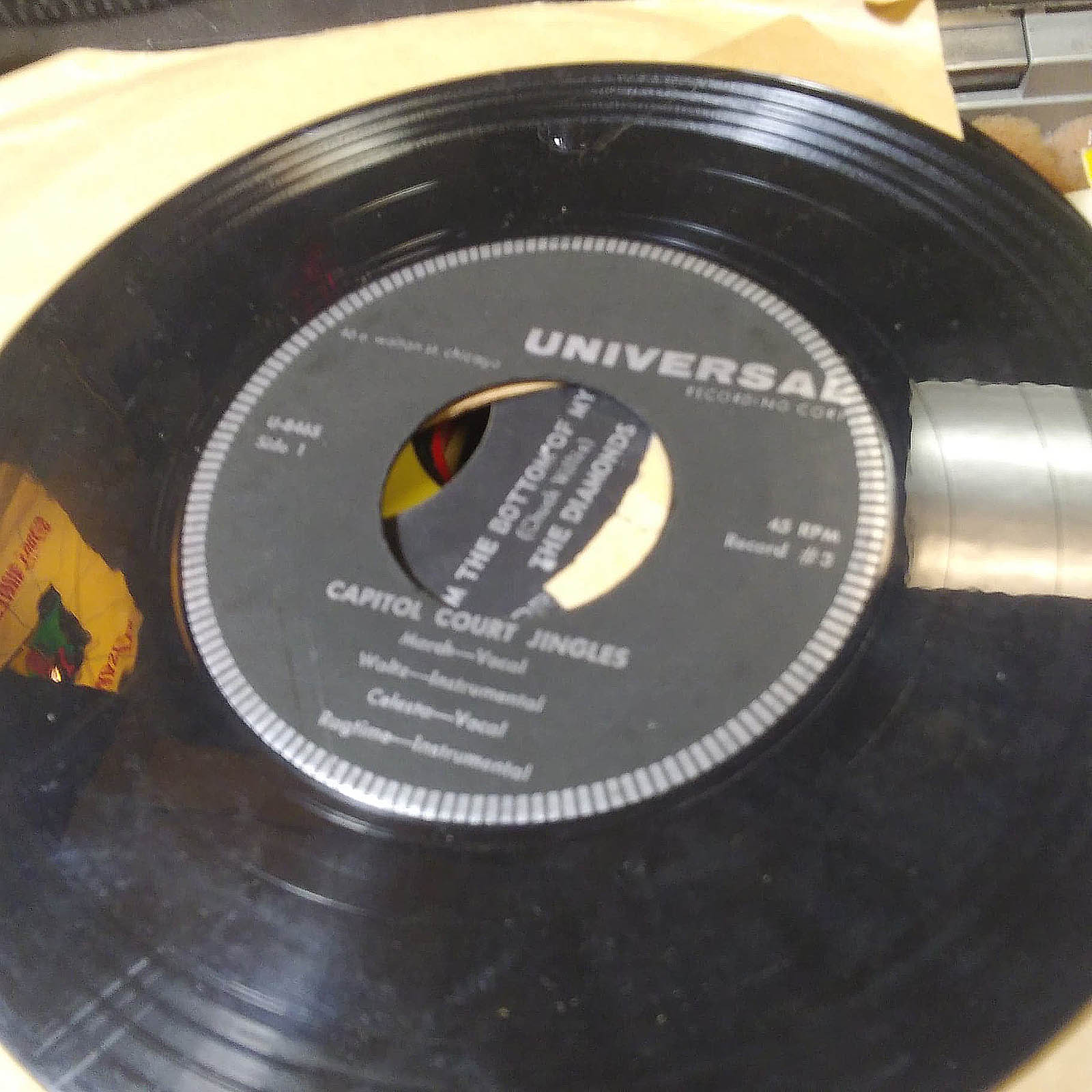 It was founded in Evanston in 1946 by Bill Putnam, who moved the business to downtown Chicago the following year (though the Walton studio dates to around 1955). Universal quickly found success thanks to Putnam’s knack for innovation.

That first year in Chicago, Universal recorded “Peg o’ My Heart” by The Harmonicats, which was the first pop song to use artificial reverb. It sold a whopping 1.4 million copies, providing not only a cash infusion but put the studio in demand.

Early on, stars like Vic Damone, Dinah Washington and Patti Page recorded there. Soon it was recording a who’s who ofblues and jazz talent with Muddy Waters, Bo Diddley, Chuck Berry (“Maybellene” was recorded there!), Count Basie, Dizzy Gillespie and many others recording there.

It is said that Putnam was the favored engineer of Duke Ellington and the studio became the home to legendary engineer and producer Bruce Swedien.

Among Putnam’s innovations, according to a post on Wikipedia, were the patent for the first EP – a 78 or 45 with two songs on each side – the vocal isolation booth, experiments with half-speed mastering, multiple overdubs of one voice and even the earliest eight-track recordings.

An in-depth article about Putnam and Universal can be found here.

Putnam later moved to California and a new business started by his sons is still a going concern.

Universal recorded TV and radio broadcasts and, it would seem from Dorobialski’s record, advertising jingles, which were likely mastered on Universal’s own in-house lathes.

The jingle records were used by radio stations to play advertisements.

“The disc most likely came from WEMP,” says Dorobialski. “They had a sister FM station that pioneered in simu-casting. On certain selected nights a music program was broadcast on the AM and FM stations. One channel on the AM and the other channel in the FM channel. My grandmother's console radio-tv, a Muntz, had this simu-cast feature. I remember listening to Jack Raymond’s music program on a Sunday in simu-cast stereo. Jack's sponsor was Bluemound Furniture. Their motto was "Furniture for Suburban Living."

I wonder if someone has a record of that one!