There are many reasons to celebrate the Brewers, but one of the most amazing to me is that I learned that French photography maestro Henri Cartier-Bresson came to Milwaukee in 1957.

There are many reasons to celebrate the Brewers, who are contenders this year and had an amazing run last season and postseason (when many of you likely queued up to get your free Webb burger).

But one of the most fun for this history buff and art fan is that I learned that French photography maestro Henri Cartier-Bresson came to Milwaukee in 1957 to photograph baseball here during the Braves' legendary season. 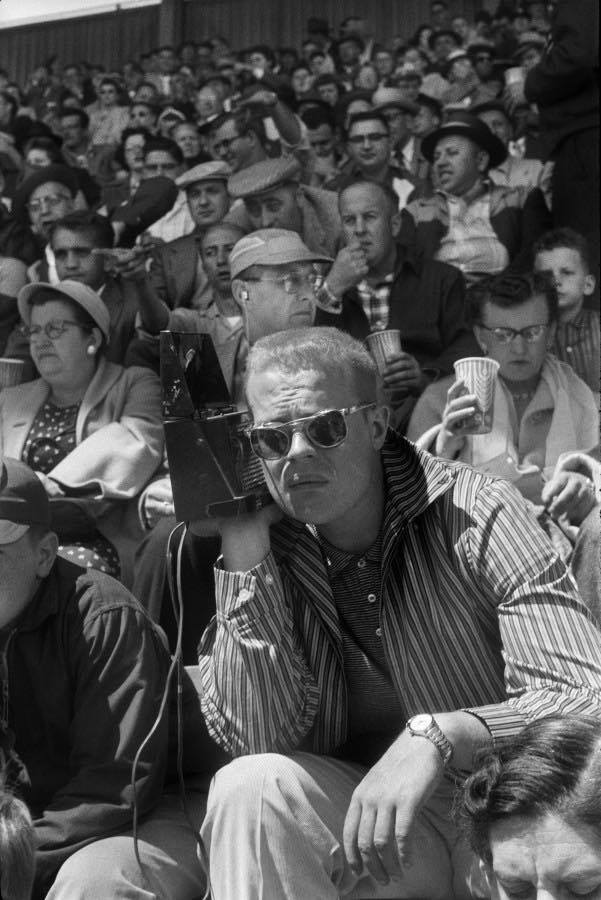 I learned this courtesy of Adam Levin, who posted three of the images taken at County Stadium on the Old Milwaukee group he manages on Facebook.

Two of the three images capture fans in the stands, and those are pretty great, showing how folks used to dress up to go to games and, in both images, intently watch the game while holding a ginormous radio up to their ears, presumably listening to the broadcast.

But my favorite is a stunning shot that looks like it was either taken from the upper deck or maybe the football press box with a zoom lens. In the center, a serpentine road snakes between two packed parking lots and an angular section of what appears to be the right field bleachers slices across the lower right.

Despite the fact that it doesn't show the game, this may be one of the most beautiful baseball-related photographs ever. 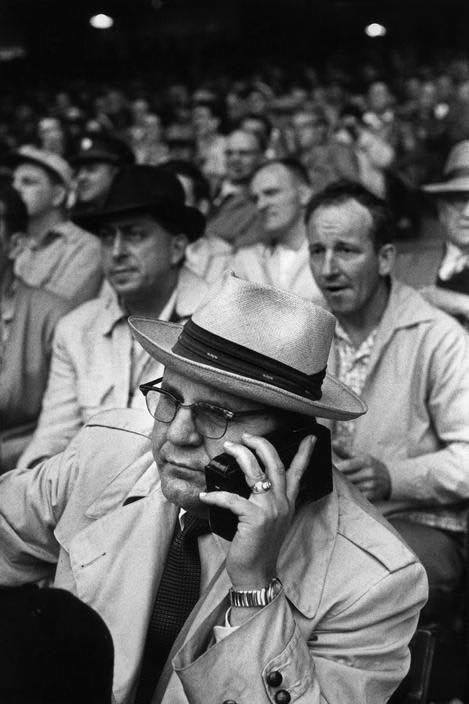 Born in 1908, Cartier-Bresson was a pioneer of candid street photography and a look at the images taken in the stands at County Stadium show why. There’s so much detail, so many faces, that one could spend hours with a magnifying glass picking out interesting things. And, despite the difference in dress, even today we can feel the excitement and the passion for the game in some of the faces (the guy at left notwithstanding).

Of course, Cartier-Bresson took many more than three photographs while he was here. Sports Illustrated ran more of them in its July 7, 1957 issue.

In addition to a spread of images at the ballpark, Cartier-Bresson also snapped images of kids playing baseball and softball at a local park, at a high school, with their parents. There are also shots of kids playing an arcade baseball game and trading baseball cards (likely worth a nice penny now if they took care of them), of folks shopping for baseball mitts and bats.

"The unusual photographic essay on baseball in this issue is the work of one of the world's great photographers," wrote SI’s then-publisher Harry Phillips. "Born in France 49 years ago, he is Henri Cartier-Bresson, who had never seen a baseball game until he went to Milwaukee on his SPORTS ILLUSTRATED assignment.

"’Photography,’ he has said, ‘is like keeping a journal. It's the little incidents that tell the story, and you have to watch for them. Reality is what we want and we know when we have it. It's like garlic – you can smell it.’

"Cartier-Bresson's work in the past has brought to Americans moments of rare insight into the lives and problems of fellow men in many foreign lands – the people of Moscow, of China, India and Spain in the Civil War. Now he lets us see our own national game, as if with new eyes and with a full heart."

And he saw it right here in Milwaukee, where the Brewers are still busy reminding us how much we love the national game with all our full hearts.

You can page through the entire issue online here.