If you've ever had the pleasure of meeting Catherine Miller, you're likely to remember her wit, her spunk and her flashy sense of fashion. But it's her can-do attitude that has gotten her through myriad challenges and two decades with Bastille Days.

Catherine (Cate) Miller is a woman of many talents. And if you’ve ever had the pleasure of meeting her, you’re likely to remember her wit, her spunk and her flashy sense of fashion.

She’s a cooking instructor and dog rescuer. She’s also worked as an aquatic exercise instructor, Associate Director of the National Christmas Tree Association and as PR and marketing director for both Planned Parenthood and the Red Cross.

But the love of her life – or, at least, for the past 22 years – has been organizing the French cooking demonstrations at Bastille Days (see schedule below). And some might be surprised to note that it’s work that has seen her through myriad difficulties, including her battle with stomach cancer and her diagnosis as bipolar, a condition marked by extreme mood swings from high (mania) to low (depression) and vice-versa.

Miller remembers the day she connected with Bastille Days like it was yesterday.

"I was freelancing at the time," she says. "And as a person with bipolar, I’d gotten to the point where a regular workplace was simply too stressful for me. But I loved working. So, I kept myself in the market with freelance projects."

Miller says the job was a great fit. She was organized and loved working with people. Plus, emceeing the chef’s stage was something that came naturally to a creative soul who began her college career in theater and fine arts at UW-Milwaukee. 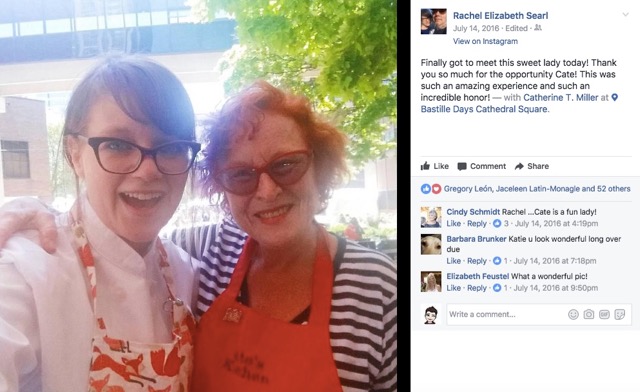 "I never became an actor," she says. "But I love people and I love to entertain. And those skills have come in handy over the years."

Miller was also a true foodie, so her charismatic personality dovetailed nicely with her life-long love for cooking, which she says came about by necessity during her childhood.

"I’ve always been fortunate. I’ve never been without food," she notes. "Both of my parents worked, and my parents were marvelous. My mother was a social worker, and my father was a doctor who spent his career telling his colleagues that they charged too much.

"But my mother was also bipolar, so she wasn’t always present. And that’s how I started cooking. It began with Chef Boyardee cans. That was scary stuff, so I moved on to exploring cookbooks."

Over the years, as she coordinated and emceed cooking demonstrations, Miller also began teaching cooking classes herself. During the past decade, she’s taught courses for the Milwaukee Recreation Department, the Jewish Home, the Junior League and MIAD. And those courses have touched the lives of audiences ages 6-90.

"I love the challenge of coming up with great recipes," she says, "But particularly for diners who have special needs, including those looking to eat dairy-, gluten-, nut-free or kosher." 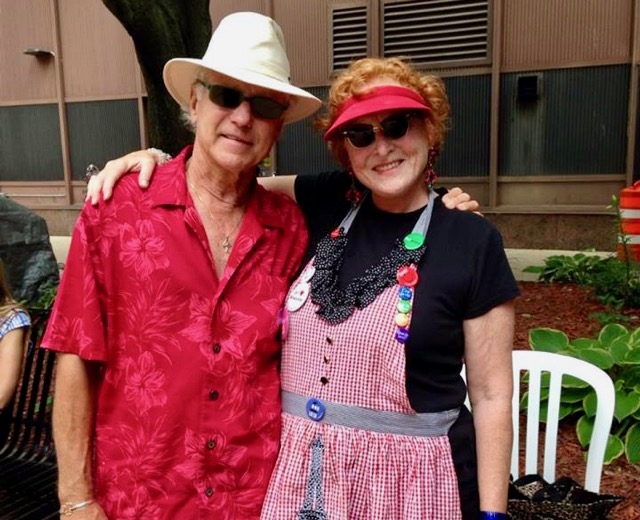 Miller’s passion and work with food has accompanied her through a multitude of trials, including 30 years battling what doctors had misdiagnosed as depression.

"It was a struggle," she says. "There were days when I couldn’t stop crying. And then one day I was listening to NPR, and a doctor on the air was talking about mental health, particularly bipolar patients. And I realized he was talking about me. So, I went back to the doctor and told them we had to redirect my treatment. Like my mother, I too was bipolar."

The realization was life-changing, says Miller, who notes she’s now on a mission to spread the word about her experience. It’s a story she refers to as "Poster Child: My bumpy ride on the bipolar roller-coaster," and she says finding opportunities to share with others through speaking engagements – an effort she hopes will help remove the stigma of mental illness – has become one of her bucket-list items.

Of course, Miller's adventures didn't end with tackling the ups and downs of her bipolar journey. In 2003, her strength was put to the test when she was diagnosed with stomach cancer. Mitigation of the disease, which expressed itself with nausea caused by hundreds of tumors in her stomach, was a rarity: she underwent a complete gastrectomy, during which doctors removed her stomach and connected her esophagus directly to her small intestine.

"I had no idea you could live without a stomach," Miller says. "I loved food, and I had been a lover of extremely spicy food, including Thai and Mexican cuisine, for my entire life."

Her recovery was long and difficult. But, Miller says, she was determined to focus on living life to the fullest extent she could as a "gutless gourmet."

"The first real food I ate after the surgery was salmon with thyme butter at Bastille Days," she says. "And I thought, 'Oh, my God, I can eat! This is so amazing.'"

And, as her recovery progressed, Miller says she felt compelled to reach out to help others who had been touched by cancer. Her experience birthed For the Health of It!, a series of monthly cooking demonstrations at the now-defunct Gilda's Club of Southeastern Wisconsin. And her work paid off. According to Miller, the events were the highest-attended programming in the Club’s history, and they culminated in a full-fledged fundraiser in 2009, featuring more than a dozen local chefs.

In addition to offering her an outlet for her passion, Miller says her life has been enhanced by two decades of great memories from her work organizing the chefs stage at the annual festival. 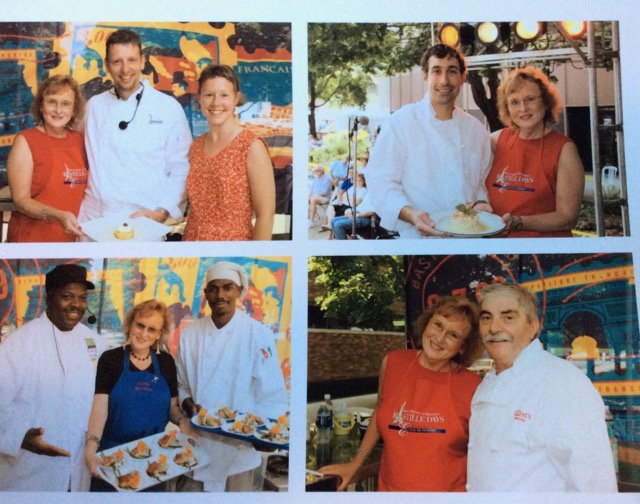 "I still remember the very first year of chef demos," says Miller. "It was 1995. The stage was positioned outside of Watts. We had no canopy, so there was no shade. It was 105 degrees and Sarah Bowman of the English Room was preparing boned quail with roasted vegetables, a notably expensive dish."

But, when no one showed up at the stage to see the demonstration, Miller says she had to think on her feet.

"Sarah thought I was nuts, but I told her: ‘Let’s put on a show.’ We pretended there was an audience, and we got through the demo. And then she asked me what we were going to do with all the food. And it was so corny and horrible, but I said to her, ‘If we plate it, they will come.’ So, we did. And they came. And we gave away every last plate of her dish."

Since that time, the demonstrations have been moved under a shaded tent at the center of the festivities. And Miller says the programming has featured countless chefs over the years, some young and up-and-coming, others who keep their work behind the scenes and are seldom in the spotlight.

"Over time, so many of the chefs who have been with me at Bastille Days have gone from server or sous chef or line cook to having their own businesses in restaurants," she says. "And I love seeing that."

Miller points out chefs like Dave Swanson of Braise Restaurant, whose first appearance at Bastille Days took place while he was working with Sanford D’Amato at Sanford. And Andy Schneider of Le Reve, who Miller calls "A bullet" and "such a rising star," has worked with Miller since his days with Coquette Cafe and Harlequin Bakery. 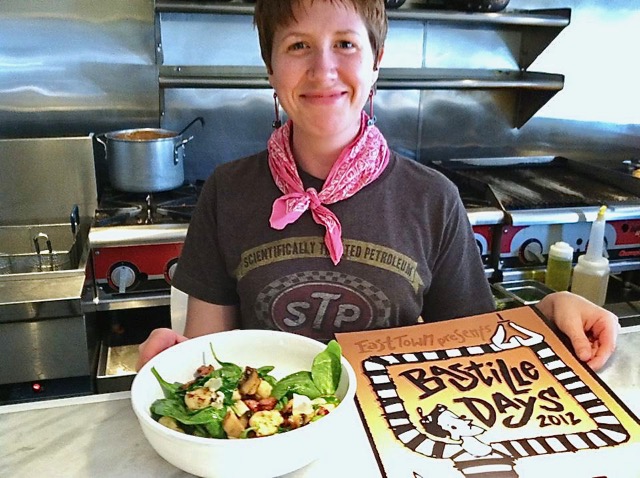 Miller says it’s a point of pride to have worked with female chefs like AJ Dixon of Lazy Susan, whose first appearance at Bastille days took place over a decade ago while she was pregnant with her oldest child and working for Cafe Lulu flipping burgers.

"Joe is another wonderful success story," she says of master butcher Joe Parajecki. "He worked with us as far back as 10-15 years ago when he was working with Metro Market. He’s such a lovely man, and now he’s the owner of Kettle Range Meats."

In kind, Miller has gained quite the reputation among chefs who’ve worked with her over the years.

Yollande Deacon, owner of Afro Fusion Cuisine and Irie Zulu, says she was delighted to get to know Miller through her work at Bastille Days.

"I was so impressed by her passion for cooking, her detail orientation and organization," she says. "On a personal level, she’s been a terrific advocate, supporter and friend. She’s also a lover of life, and her killer personality is absolutely infectious!"

Similar praise is sung by Dixon of Lazy Susan, who began working with Miller while her career was still in its infancy.

"I have so much to say about such a wonderful woman," Dixon says. "Cate has seen me demo at Bastille through two pregnancies ... and if you know her as well as I do, you'll know she is nothing short of a miracle. She opens up her home for you and is someone you can call on when you need a real true friend. And that's not even mentioning all the eccentric pairs of glasses she has had through the years! She always stays ahead of the curve when it comes to fashion.

"I have done countless demos at Bastille and was happy to have been there with my daughter on stage for her 20th year. Her dedication, extreme organization and thoughtfulness for all the chefs shows with how many of us will repeatedly come back to demo for her. I am sad I will miss this year. It is always on my must do's for summer."

Pastry chef Rachel Searl of the SURG Restaurant Group, participated in the chef demonstrations for the first time last year. And she says Miller made her experience.

"I had never met her before that day," she notes. "And she did everything she could to make me feel welcome and right at home. Cate has to be one of the sweetest, kindhearted, most genuine people I have ever met and just being around her made me smile! She gave me so much assistance and guidance leading up to my demo and the day of and I will never forget that day because of her!"

But maybe the highest of compliment comes from her colleague, Kim Morris, Executive Director for the East Town Association, who notes: "Cate is a true professional and amazing to work with. She always has a smile on her face and so incredibly passionate about food, chefs, Bastille Days and fun! She has a long history with Bastille Days and is so well connected in the Milwaukee community. She is a true pleasure to work with and we all love her!"

It’s all high praise for Miller, who credits both Bastille Days and her food-related work with giving her the strength to get through everything that life has thrown her way.

"This work … it’s been the connective tissue I've needed, and it's help me prove to myself that I can be a high achiever over a long period of time," she says. "The same is true for my work with the Milwaukee Department of Recreation where I've been teaching for over a decade."

It’s also a liberal dose of inspiration for others who – like Miller – have met life’s challenges head on and channeled their talents into work that enriches those around them.

10 ways to get your French food fix at Bastille Days

Survey asks for your thoughts on Bastille Days