Because of its unlikely setting at the end of a long spit of land that juts into Lake Erie – with water on three sides – Cedar Point amusement park cuts a dramatic figure as you approach it from the causeway connecting it to Sandusky, Ohio on the mainland.

Across the water, the park – which proclaims itself, probably quite rightly, the roller coaster capital of the world – looks like a tangled web of dramatic roller coasters and other high-flying rides.

And once you step inside the gate? Cedar Point still looks like a tangled web of dramatic roller coasters and other high-flying rides.

But closer up you can also see all of the lower-lying rides and fun, and you realize that even if defying gravity isn’t your bag, Cedar Point boasts fun for all ages. 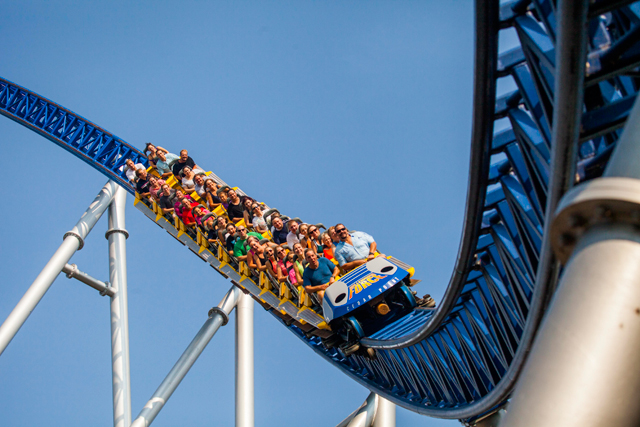 And for a history buff like myself, there are also lots of little clues to the park’s long and storied history to be found.

Cedar Point – an easy six-hour drive from Milwaukee (we did it in a weekend) – was already a favorite picnic and swimming spot by the middle of the 19th century. It got its first ride, a toboggan ramp that swooped thrill-seekers right into the lake, in 1890.

When electricity was installed in 1891, it set the stage for the point’s first coaster, the Switchback Railway, which opened the next year. Another one opened a decade later and the place has been adding and adding ever since. The oldest still-operating coaster is the 1964 Blue Streak.

Though it’s compact enough in footprint that you can get around easily, Cedar Point is quite literally so packed with fun that it’s impossible for me to detail it all here. Everyone will discover their own favorites among the long menu of attractions. 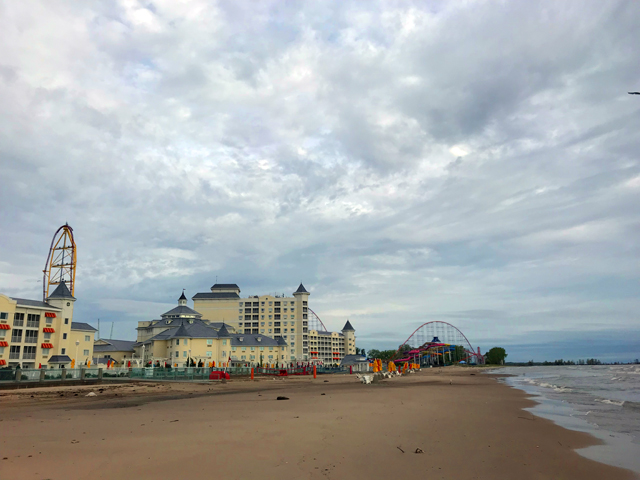 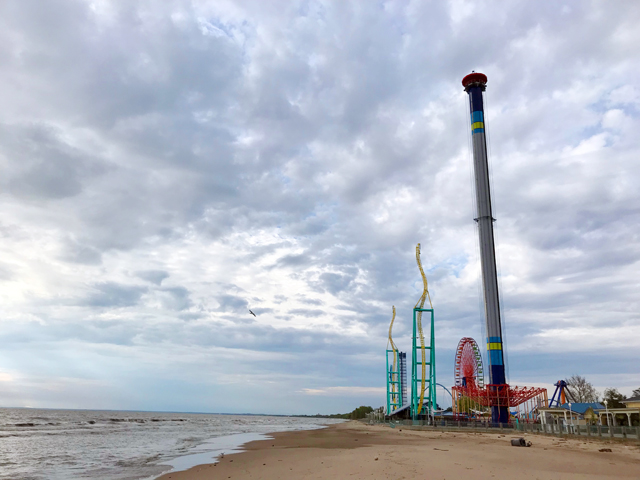 Remember, however, to save time for the beach on the east side of the island, which has volleyball nets, umbrellas and chairs, a snack shack, some pretty impressive breakers when the conditions are right and all the outdoor amenities of the 669-room and suite Breakers hotel, if you’re staying there.

There are also RV sites and cottages for rent at Lighthouse Point, and other lodgings, too, like Castaway Bay, which has a waterpark, and Cedar Point Express hotel. 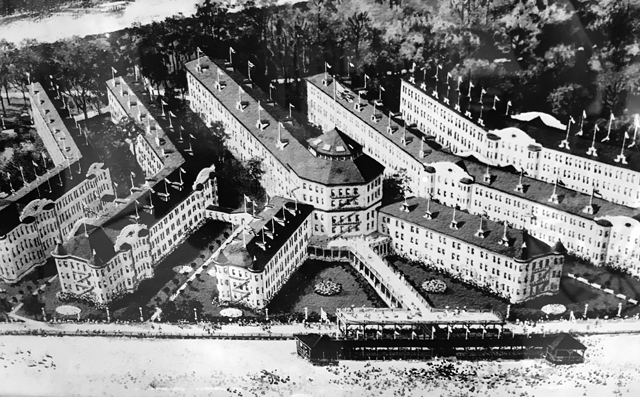 The Breakers opened in 1905 and the main building (later additions have replaced earlier sections) is quite impressive, with a classic, resort-like lakeside lobby and a lovely atrium beneath the central dome.

There are indoor and outdoor pools, an arcade, a Starbucks and, for dining, a Perkins and a Japanese hibachi restaurant. 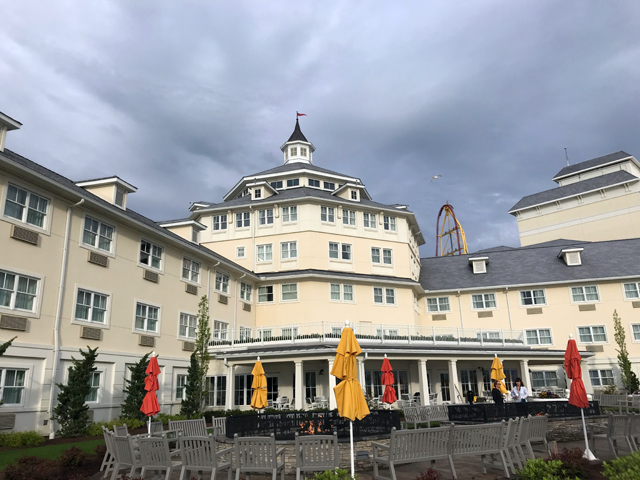 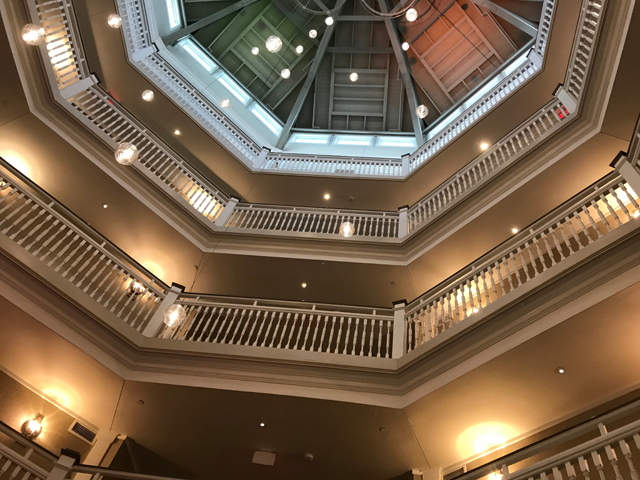 On the west side of the point is a marina where ferries to the nearby islands dock. Alas, the weather was uncooperative during our visit, but I bet a day trip around the islands is a blast.

Just north of the hotel is the impressive-looking Cedar Point Shores Waterpark. 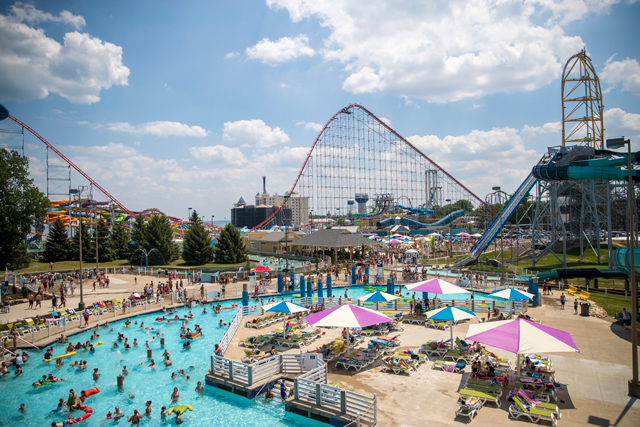 We didn’t let Mother Nature slow us down once we entered the amusement park. 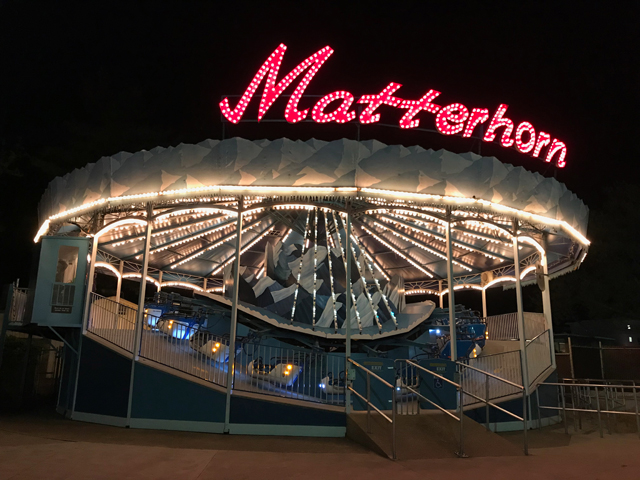 Across a day and a half, we logged more than 10 miles (according to my phone's GPS), going from classics like the swirling Matterhorn to seemingly jet-propelled rides like the Top Thrill Dragster. We also arrived the second weekend the new Steel Vengeance was opened and it was in high demand among thrill-seekers.

The kids collected tickets in the arcade, in what is surely among the older buildings at the park, and which boasts an interior topped with Gothic arches. 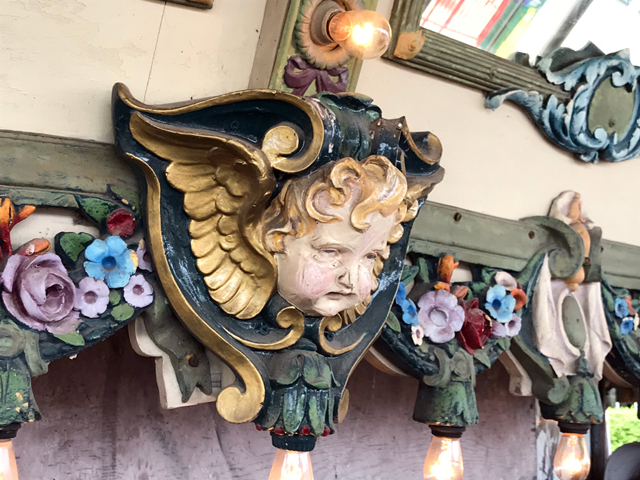 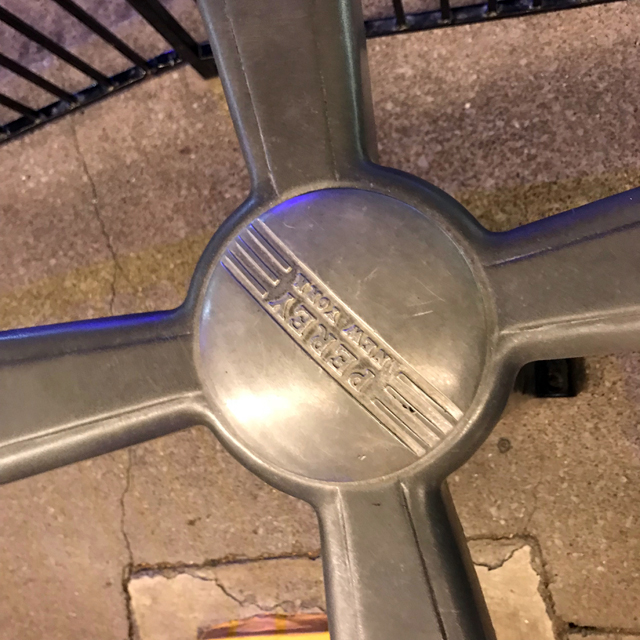 I also enjoyed spotting vintage fairground items like the gorgeously painted and carved Kiddieland Carousel, built in the mid-1920s (see pic above), and the Art Deco-style turnstile offering entry into the racing derby. Just outside the park, a collection of old buildings now serves as seasonal housing and offices for the park. 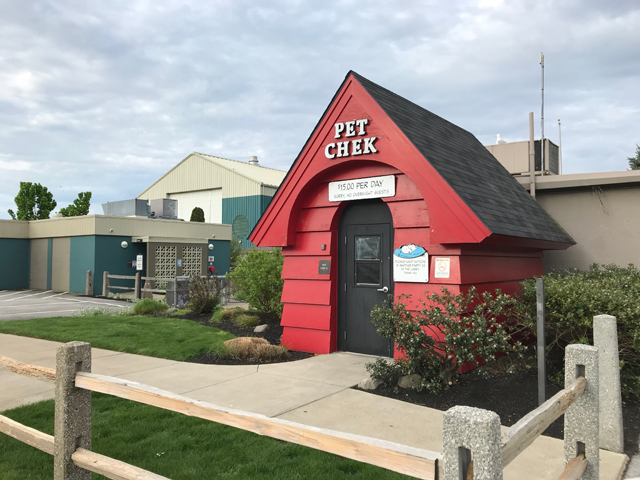 Nearby, we passed the Pet Chek and regretted not bringing the furriest of the family along for the ride, but then went over to the petting zoo to hang with the sheep, goats, cow, horses, donkeys, rabbits, llamas and camels instead. 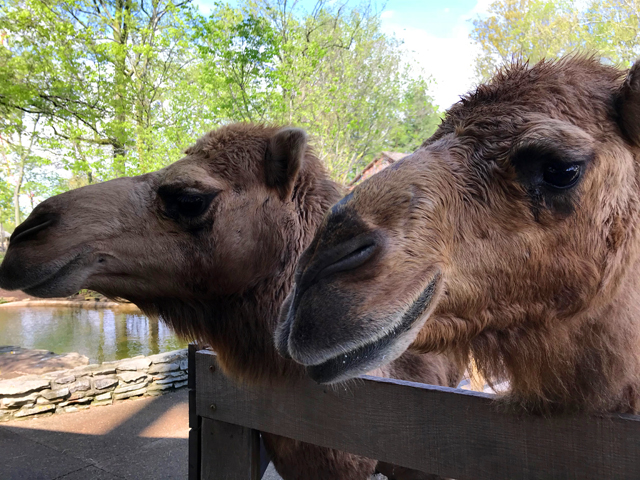 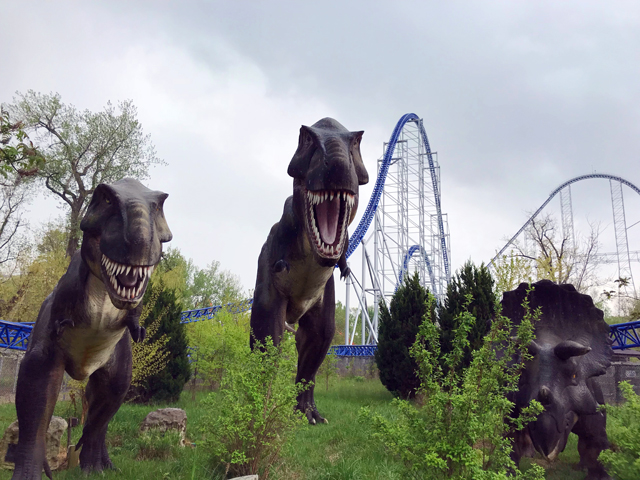 We walked with the decidedly less cuddly dinosaurs – which roared and moved threateningly as we passed – in the animatronic Dinosaurs Alive area.

We took the de rigueur photo of us locked in the stocks in the center of the Frontiertown, which has early Ohio buildings that were moved to the site over the years, and even donned retro garb for a Victorian era family portrait in which, of course, none of us smiled. 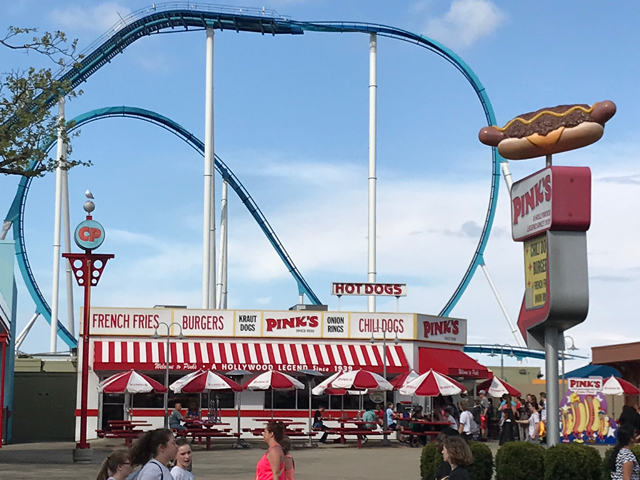 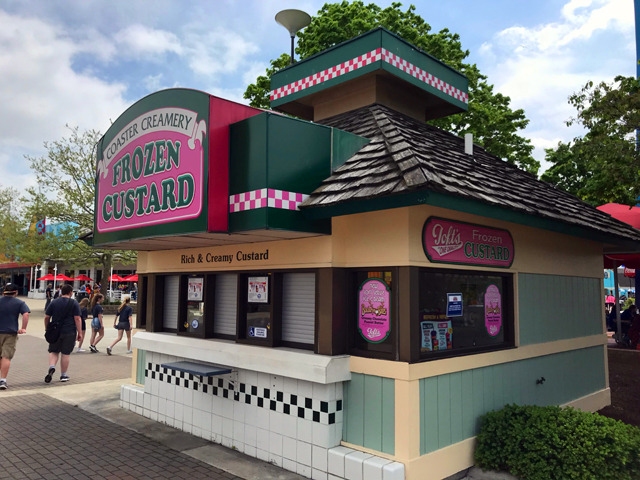 We checked out the vintage Pink’s burgers and hot dogs, which looks a whole lot like the Hollywood original. We sucked on too many Technicolor ICEEs, and we snapped photos of the custard stands, which hadn’t opened yet for the season.

Fun fact: Cedar Point is where, in 1923, a customer at the Kohr’s Frozen Dessert stand tried the egg-laced ice cream and declared, "this tastes like frozen custard," bestowing that name on the treat for the first time in recorded custard history, according Kohr's. 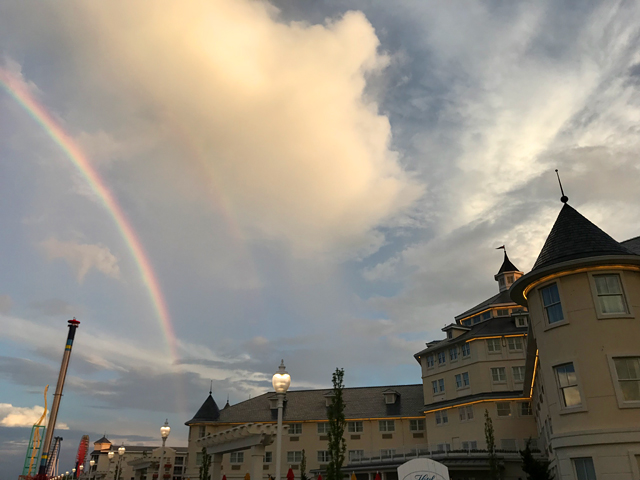 Though only one in the family has the daredevil urge, we didn’t struggle for a second to find fun in the roller coaster capital of the world (though we have to return to try the custard).

That's because what the park's motto doesn’t tell you is that Cedar Point offers much more than rollercoasters, too.