What I found on a trip to Chicago last week was a city masked and distant, for the most part, taking health measures seriously and yet still offering guests a fun, if more restricted, experience. Hand sanitizer was available at just about every turn.

The week before the schools and most everything else shut down in March I spent a weekend in Chicago for what turned out to be a last hurrah before a sequestered life of canceled vacations and working at home. Since then, those days in the Windy City have felt years, rather than months, distant.

When the opportunity arose to see how Chicago was taking tentative steps toward reopening to visitors, I took it, hoping to contrast to that previous, comparatively carefree visit of four months earlier. 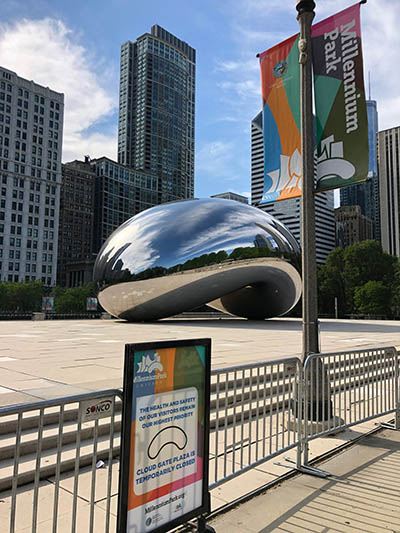 What I found was a city masked and socially distant, for the most part, taking health measures seriously – hand sanitizer was available at every turn – and yet still offering guests a fun, if more restricted, experience.

Before proceeding I should say that Chicago is wearing masks, for the most part. Not just indoors, where it's required, but also on the sidewalks and in parks. So if you’re unwilling to mask and distance, it’s best to stay home for now.

Additionally, travelers from a number of states must self-quarantine for 14 days when traveling to Chicago. Wisconsin was, until last week, one of those states.

Chicago is anything but deserted, but there are eerie moments to be had, like the chance to see Sir Anish Kapoor’s Cloud Gate (aka The Bean) in Millennium Park with almost no people reflected in its mirror-like surface.

But you’ll need to zoom in for your photo because everyone is kept at a distance. 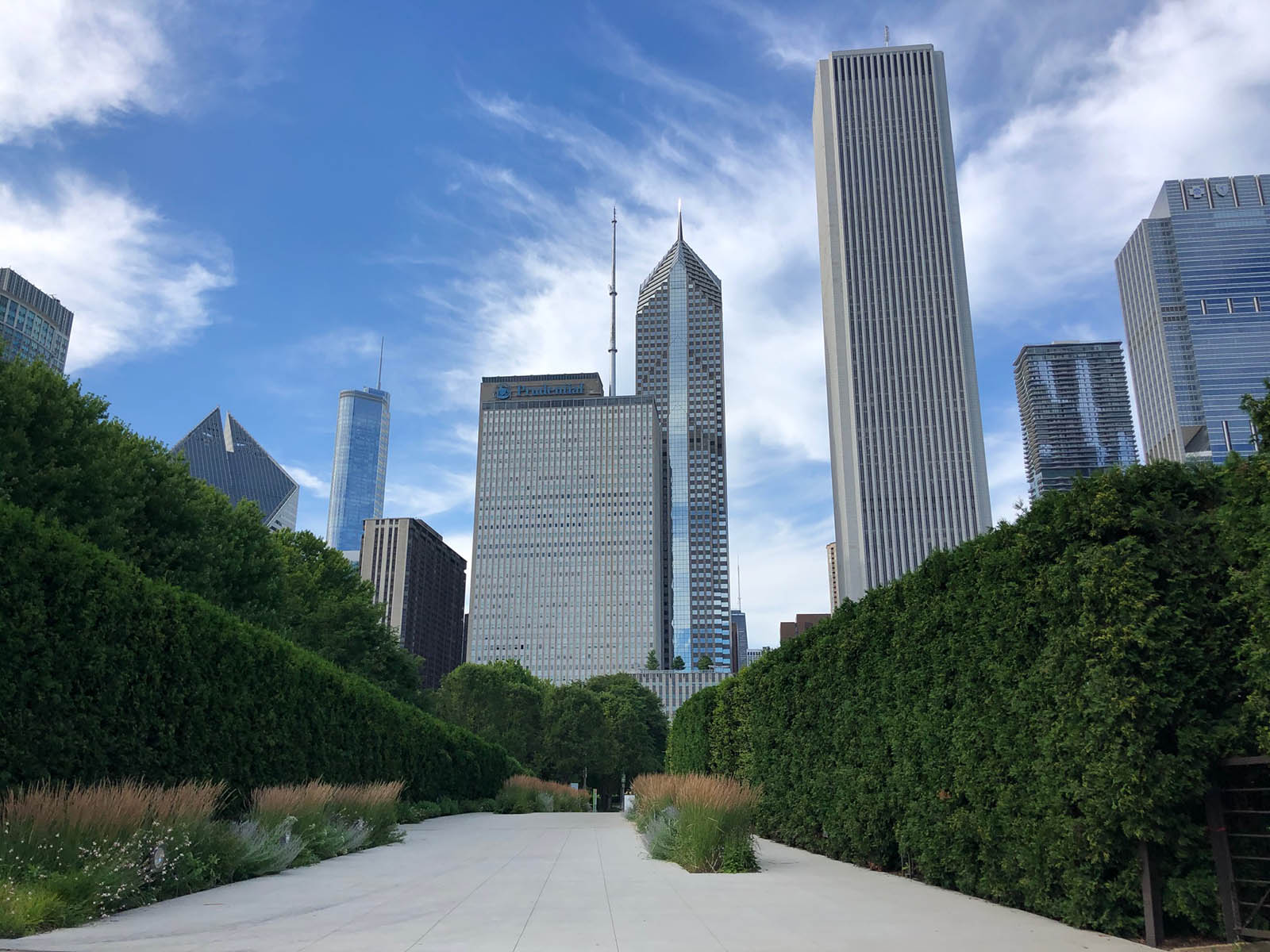 You can approach the nearby Crown Fountain, but the water’s turned off.

In fact, there’s only one entrance and exit open at the park and security guards turn away anyone not wearing a mask.

The result is that even on a gorgeous mid-summer afternoon, you can find yourself entirely alone in the Lurie Garden (pictured above) – a rare treat.

There are more people to be found along the River Walk but, again, masks are required and even many joggers were masked here. 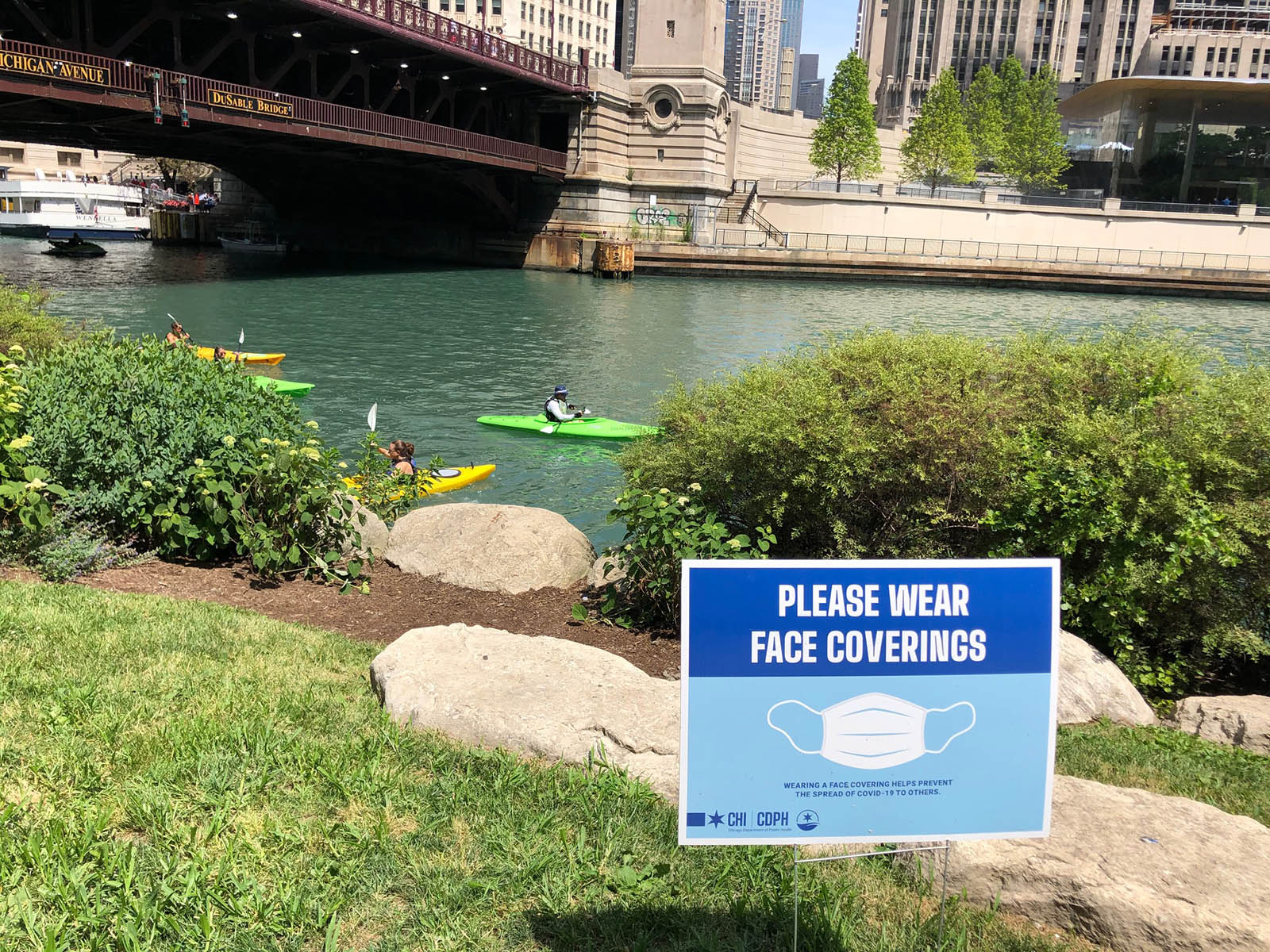 While the Ferris wheel at Navy Pier was stagnant and some favorites like the Art Institute of Chicago and the Field Museum were still closed, a few others were taking tentative steps forward.

(NOTE: All three have since reopened, though Navy Pier has announced it will close again on Sept. 8.)

The almost entirely outdoor Lincoln Park Zoo, 2001 N. Clark St., is a favorite in these trying times, for its vintage vibe but with modern amenities. Reservations are required for timed visits to help prevent overcrowding. 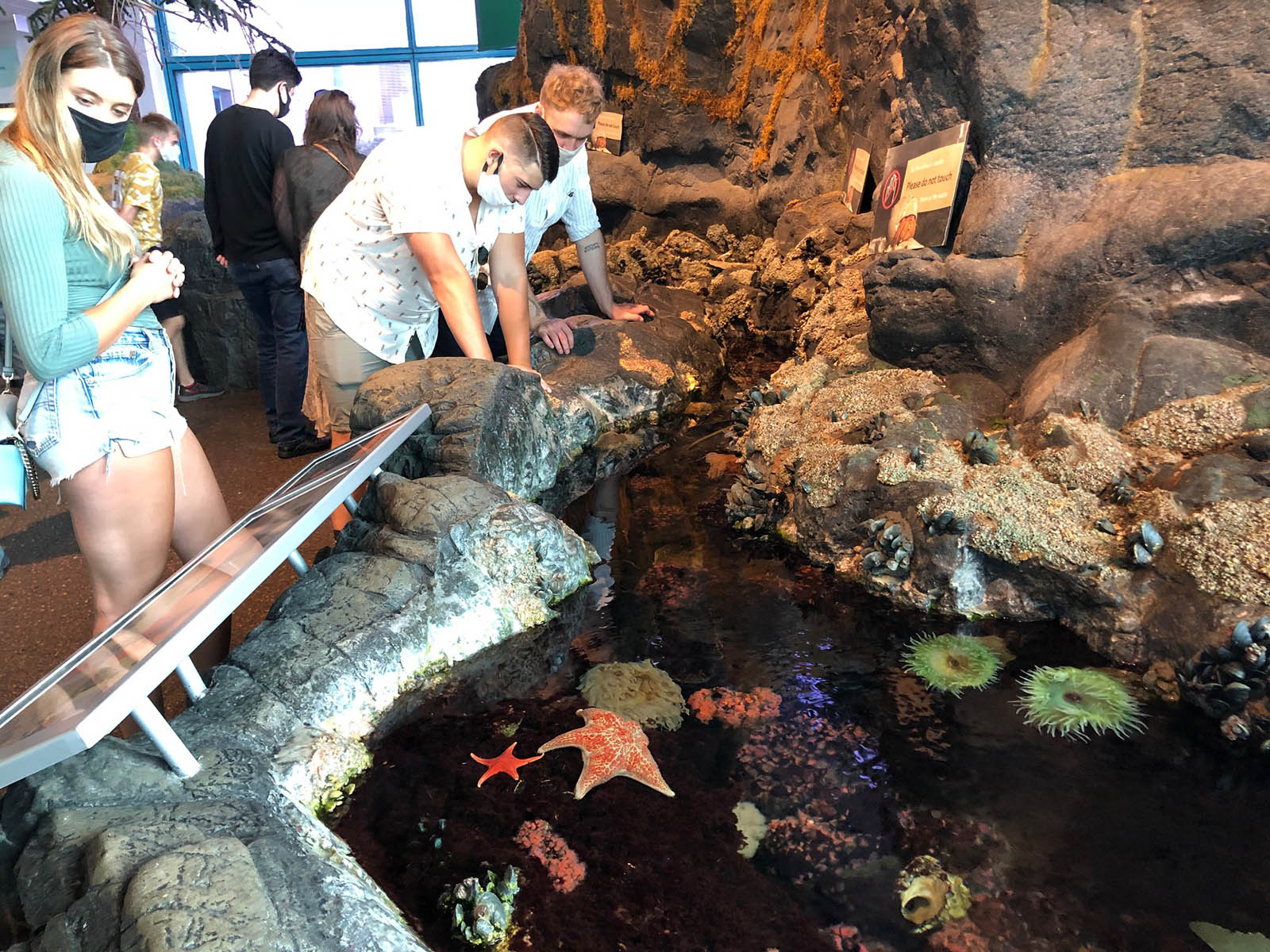 The same is true at the Shedd Aquarium, 1200 S. Lake Shore Dr. Because it's indoors, there are constant reminders to keep masks on and to keep at least one dolphin length between you and other guests.

While the dolphin shows are on hold – to help avoid folks sitting too closely – visitors didn’t look disappointed as they checked out the exhibits. In fact, they looked at least as happy as the penguins did when they got a chance to leave their area and explore the aquarium during the shutdown.

Another open-air option for sightseers are the Chicago Architecture Center’s varied tours by foot, boat and other transportation, 111 E. Wacker Dr.

We took the Chicago Architecture Foundation Center River Cruise aboard Chicago's First Lady, where capacity was reduced, which meant we never got very close to anyone else on board, and masks were required. The boat was cleaned repeatedly during the cruise, too. 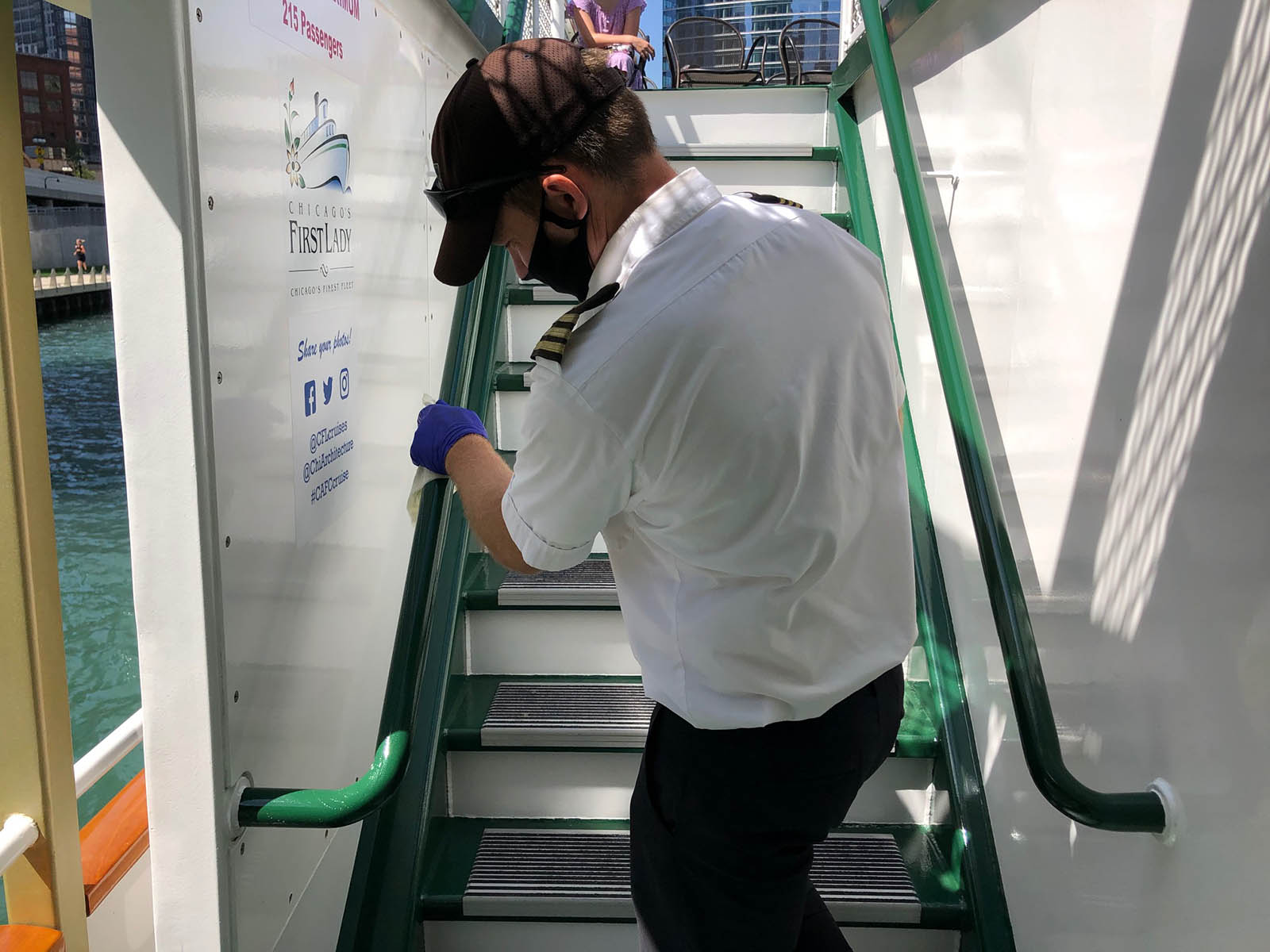 The docent’s narration was in-depth and interesting, discussing darn near every building along the 90-minute route up and down the Chicago River on an absolutely beautiful, sunny day. It was almost enough to make you forget the damned coronavirus.

If you are willing to go, you’ll find many – but not all – hotels, restaurants and bars open – at reduced capacity, with a focus on outdoor dining when possible and a strict adherence to masks.

When it comes to dining, seeing the restaurant and its patio can be the key to feeling comfortable.

We opted for places that offered outdoor dining, in addition to the reduced capacity and mandatory masks that were in force everywhere, reassured by Mayor Lori Lightfoot's enforcement of the rules. (As positive cases began to rise, especially among young adults, recently Lightfoot further tightened restrictions, too, banning all indoor service at bars that only serve alcohol and cutting the allowable size of groups from 10 to six in restaurants and bars that serve food.)

Our reopening guidance isn't open to interpretation. We're not kidding when we say we'll take action to save lives and preserve the gains our city has made in fighting COVID. https://t.co/oKf7grSQmp — Mayor Lori Lightfoot (@chicagosmayor) July 13, 2020

That meant that our meals came with a variety of al fresco views of the city.

A lunch at Gibsons Italia, 233 N. Canal St., was particularly rewarding thanks to a stunning view of the river where it splits into the north and south branches. The astonishing array of whiskey on offer (for an Italian restaurant), handmade pasta and fresh seafood, didn’t hurt, either. 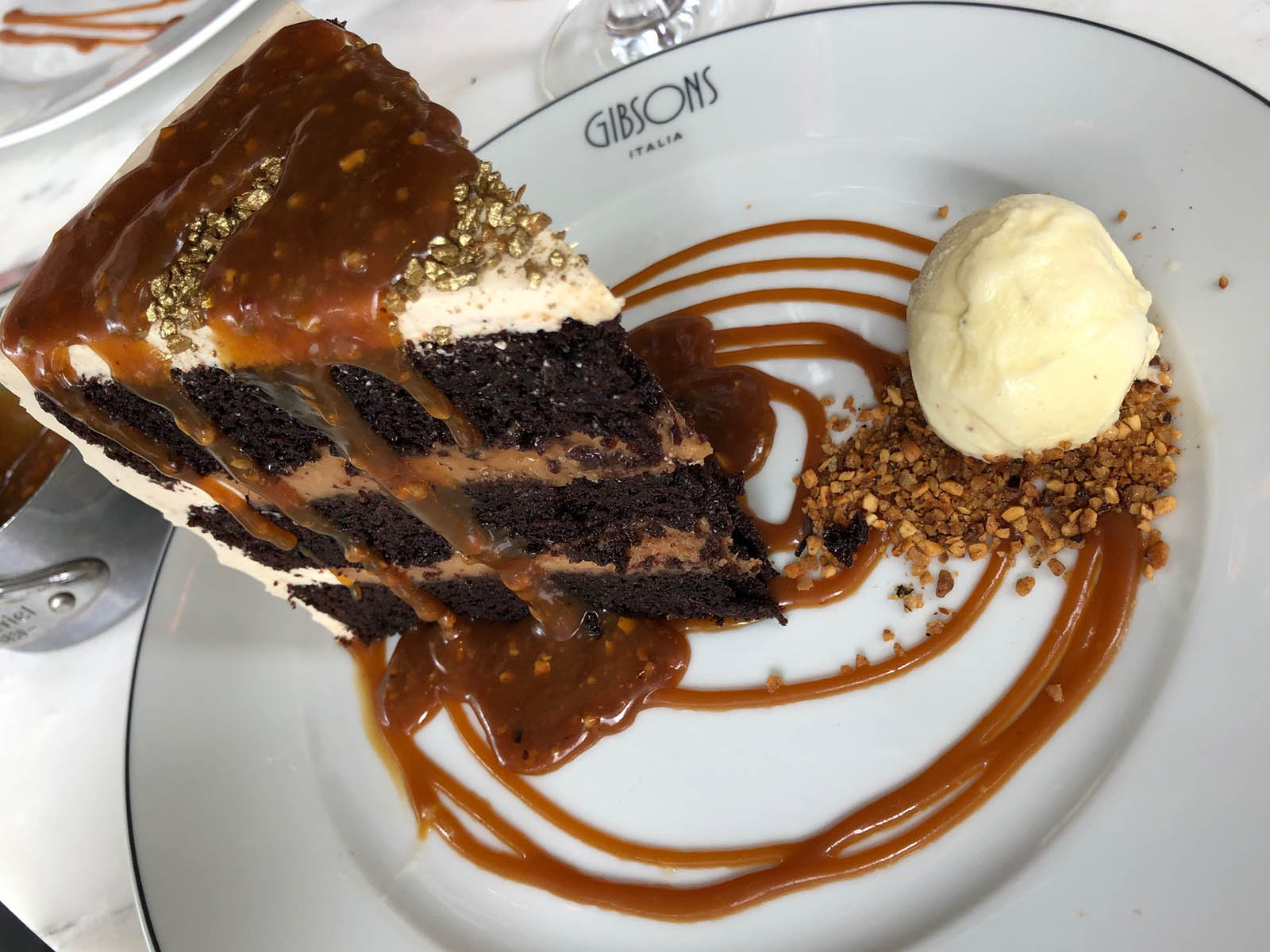 And just when we thought it couldn’t get any better, dessert arrived. Four people each chose a different option and each one was more delectable than the next (though I’m partial to the giant wedge of hazelnut cake that I implore you to share with someone, preferably me). 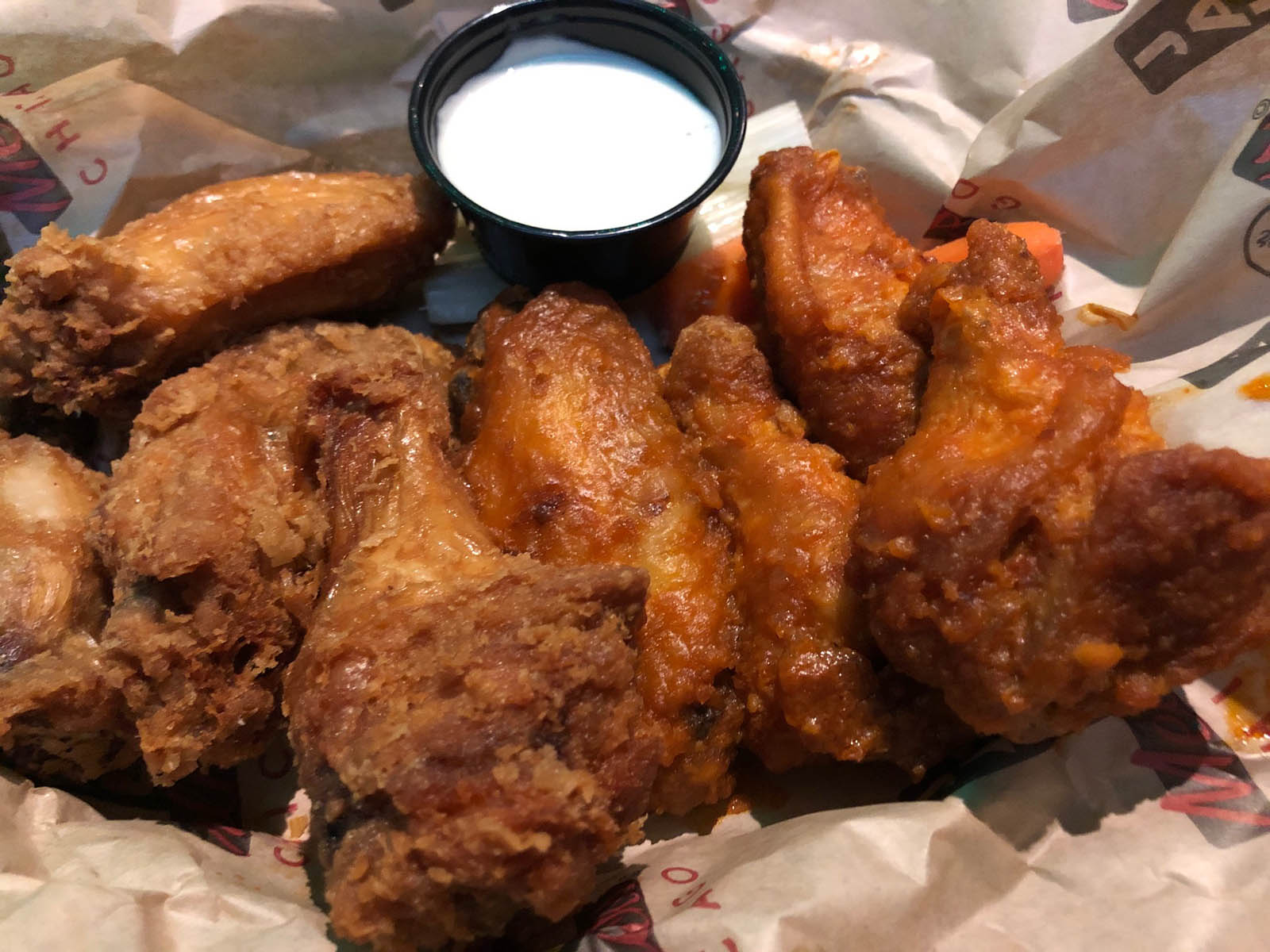 Another night, we dined in style at About Last Knife, 168 N. Michigan Ave., a modern, casual steakhouse in the lobby of our hotel. There, as at Gibsons, we opted for a table on the threshold – right where inside meets out – to be a bit farther away from the passersby, but still with plenty of fresh air circulating. 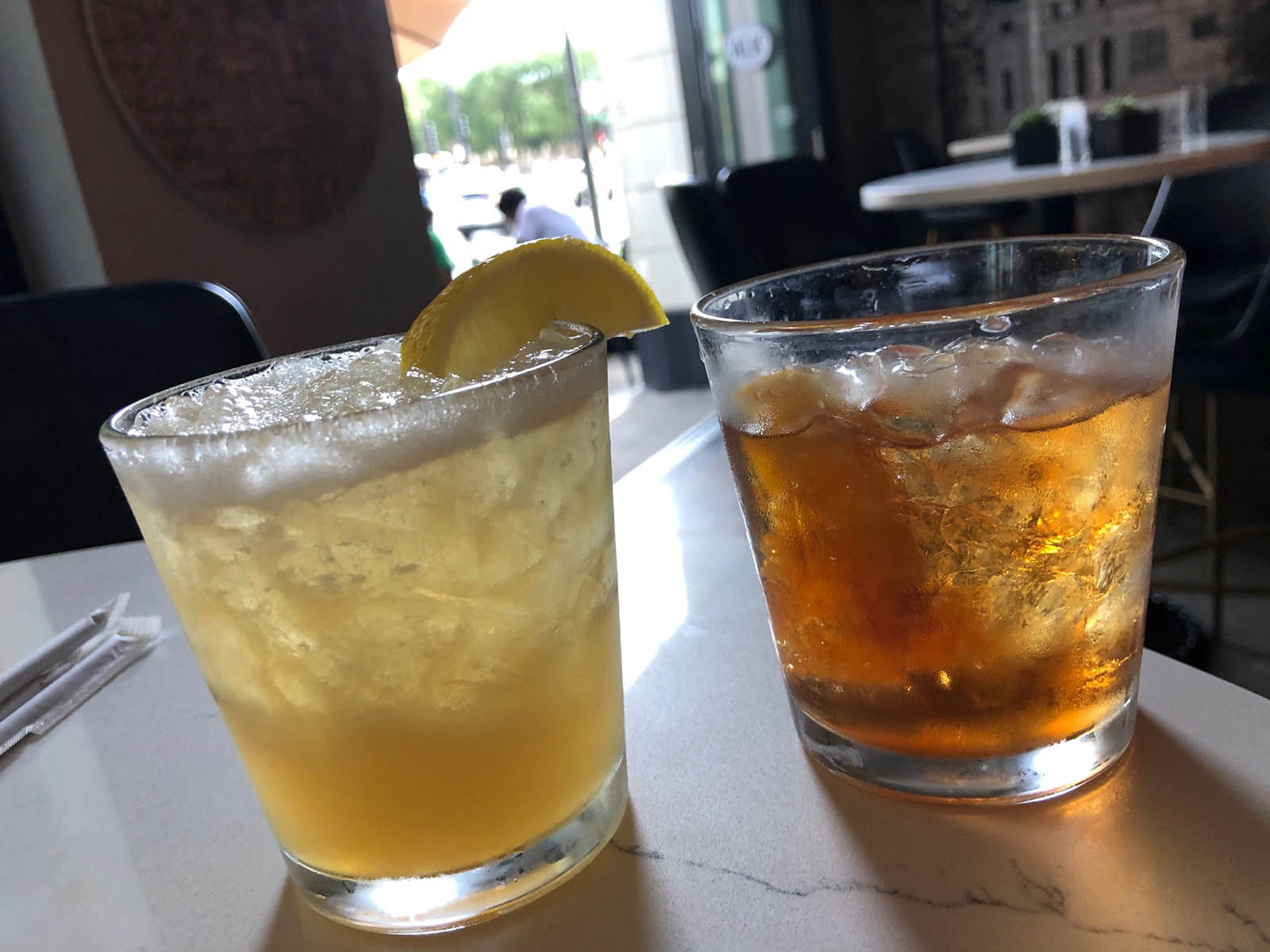 At ALK, we got a view of the full parade of life that enlivens Michigan Avenue every day, plus some perfect salmon, sliders, steak salads and, guilty, more whiskey.

The only place I visited that didn’t have outdoor seating was the brand new Crushed by Giants brewery, the first proper brewery in the heart of downtown Chicago. (Although the address is 600 N. Michigan Ave., you’ll find it more easily on the northeast corner of Ohio and Rush.) 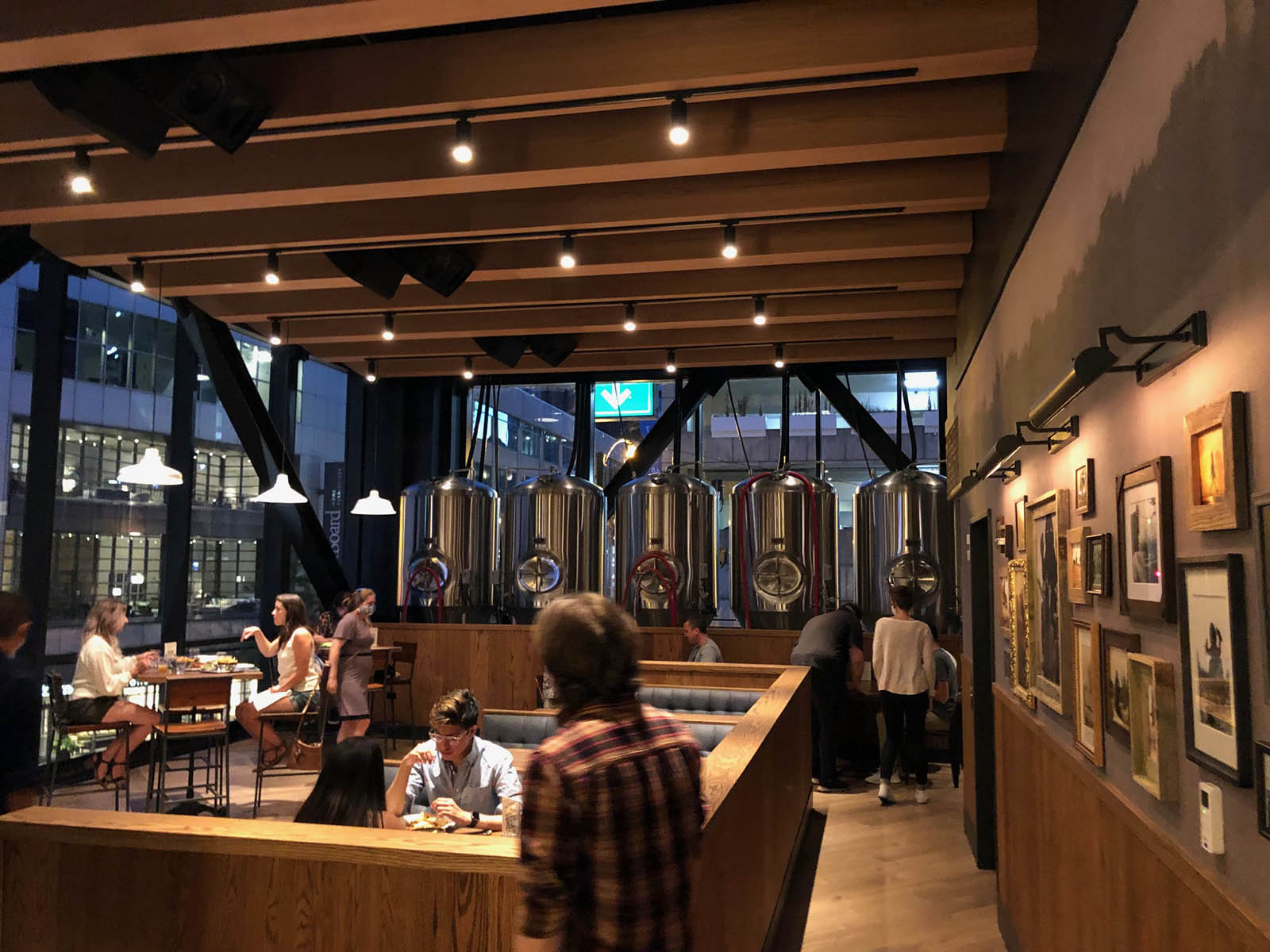 Launched by the DryHop family of breweries (DryHop, Corridor and Roebuck), the venue, located upstairs in the AMC Theatres complex, has a full on-site brewery, taproom and kitchen and makes a couple great IPAs (don’t miss the Neon Werewolf DIPA), a refreshing kölsch and a couple others for now, with more likely to come.

But even here, masks were required except while drinking, of course, and groups were seated apart. Just two pairs of stools were arranged at opposite ends of the taproom bar.

Because it’s nice to be prepared we brought some hospital-grade sanitizing wipes along for the ride, but the Hotel Julian has such a rigorous cleaning protocol that we didn’t really need them. (Still, we wiped, because we brought 'em, so why not. right?) 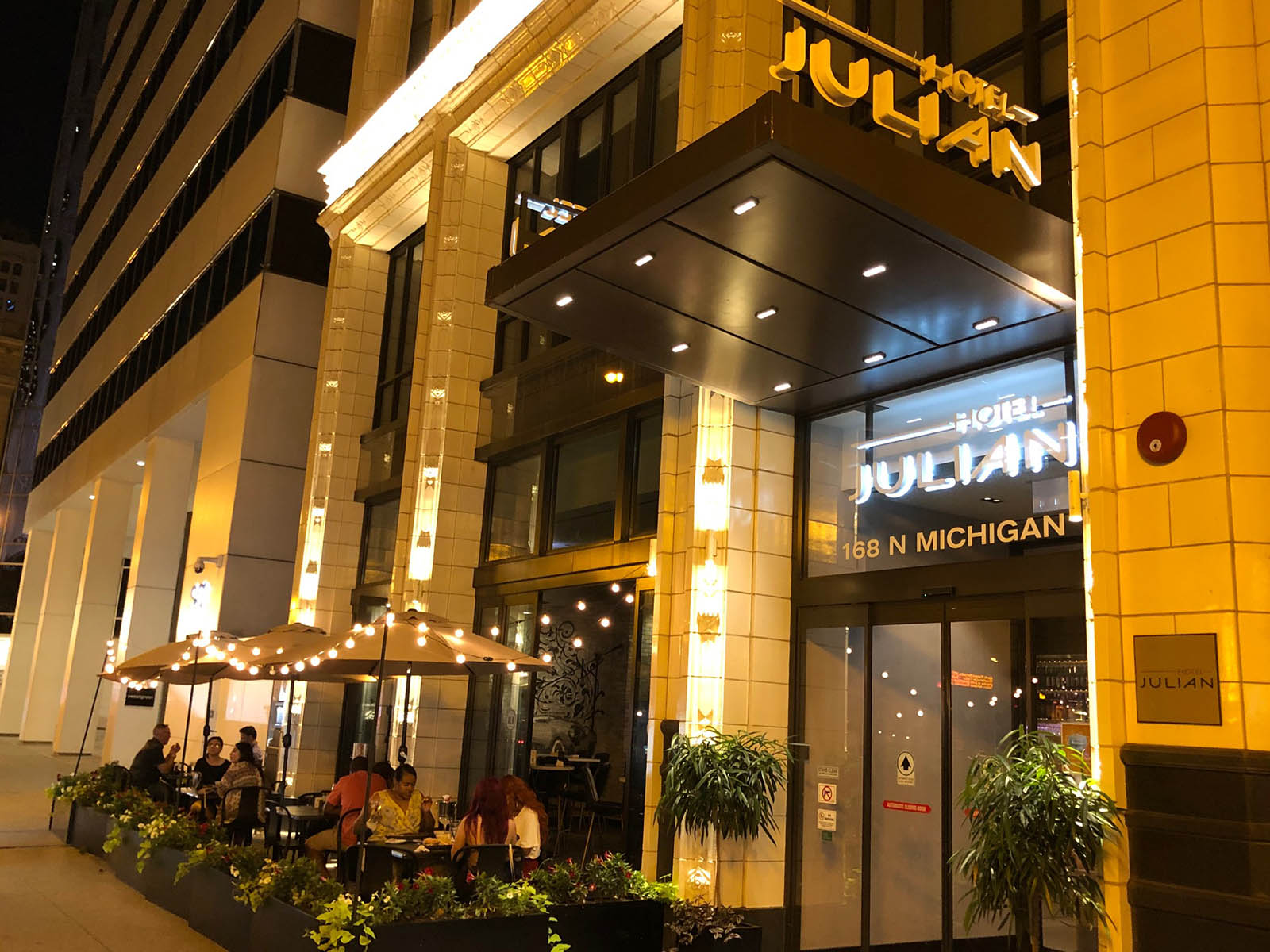 There are plexiglass barriers at the front desk – where check-in and check-out were entirely touchless – we never shared an elevator with anyone and masks were required everywhere outside the guest rooms. The valet parking service has been suspended.

In addition, the public areas were sanitized every half hour with an EPA-approved solution that kills coronavirus. The same treatment is applied to the guest rooms between stays.

The Hotel Julian – a comfortable, centrally located hotel with modern appointments, staffed by an ever-affable staff, built into the gorgeous 1916 former Atlantic Bank Building – is, like many hotels, offering special rates in hopes of getting folks to come back to the Windy City. So, if you're feeling up to a trip, there are some great deals out there right now. 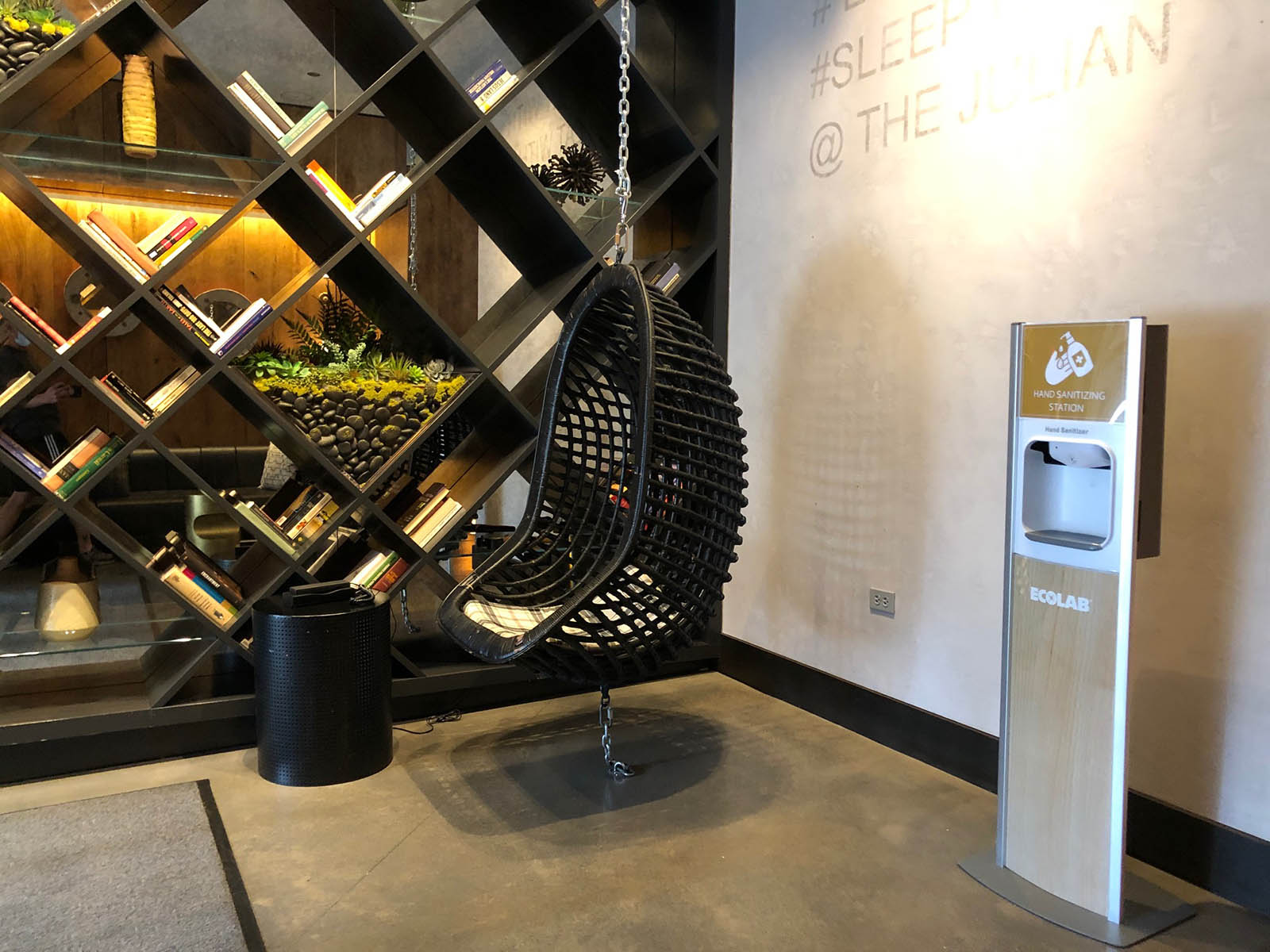 You can read more about the Hotel Julian in this article about a previous visit that didn’t require so much talk of sanitizing measures.

While the Windy City hasn’t completely reopened, there’s plenty to keep you interested and entertained. A city-wide commitment to masks, distance and hand sanitizer means that it’s likely that more and more venues will be coming back online and, at the same time, feels pretty safe.

If you go, please be vigilant and safe and considerate of others, because we are, in fact, all in this together, and we all want to get back to a "normal" life. Wash your hands ... both well and often.

(NOTE: Be sure to check the websites of places you want to visit before you trip as attractions are slowly coming back online and ones that were closed when we visited, might have reopened by the time you go. Also, if cases again worsen in Wisconsin, it's possible the state could be re-added to the travel advisory list, so check that before you go, too.)