So often when I travel, I go in search of the new and different. But, sometimes, it's also nice to check in on some old friends. That's what I did last time I went to Chicago for a weekend getaway.

So often when I travel, I go in search of the new and different. But, sometimes, it’s also nice to check in on some old friends. That’s what I did last time I went to Chicago for a weekend getaway.

For a start, I returned to see a longstanding friend: The Talbott Hotel, 20 E. Delaware Pl. on the Gold Coast, a few blocks from the Water Tower. Opened in 1927, the hotel, which is in a convenient location on a quiet street just steps from the peaceful Argo Tea shop in Connors Park triangle, is in my sweet spot. 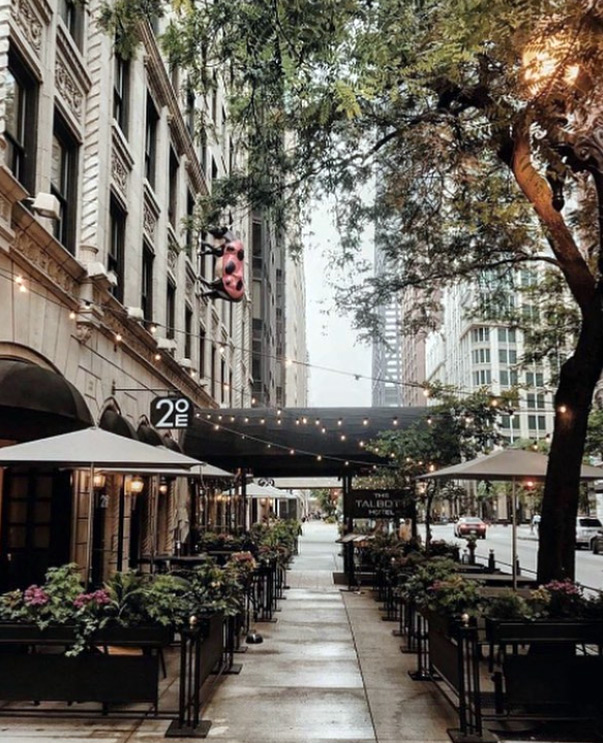 It’s not so small that you suspect the front desk knows your every move but it’s not so big that it’s impersonal. Over the years, I’ve probably stayed at The Talbott four or five times, and each time it makes me feel – for a day or two – that I live in Chicago’s most upscale neighborhood.

Because the 178-room hotel recently got a $20 milion makeover, retiring its more traditional decor, The Talbott feels as modern, well-appointed and comfortable as any newly constructed property, but bolstered with vintage details that give it an extra dose of personality. 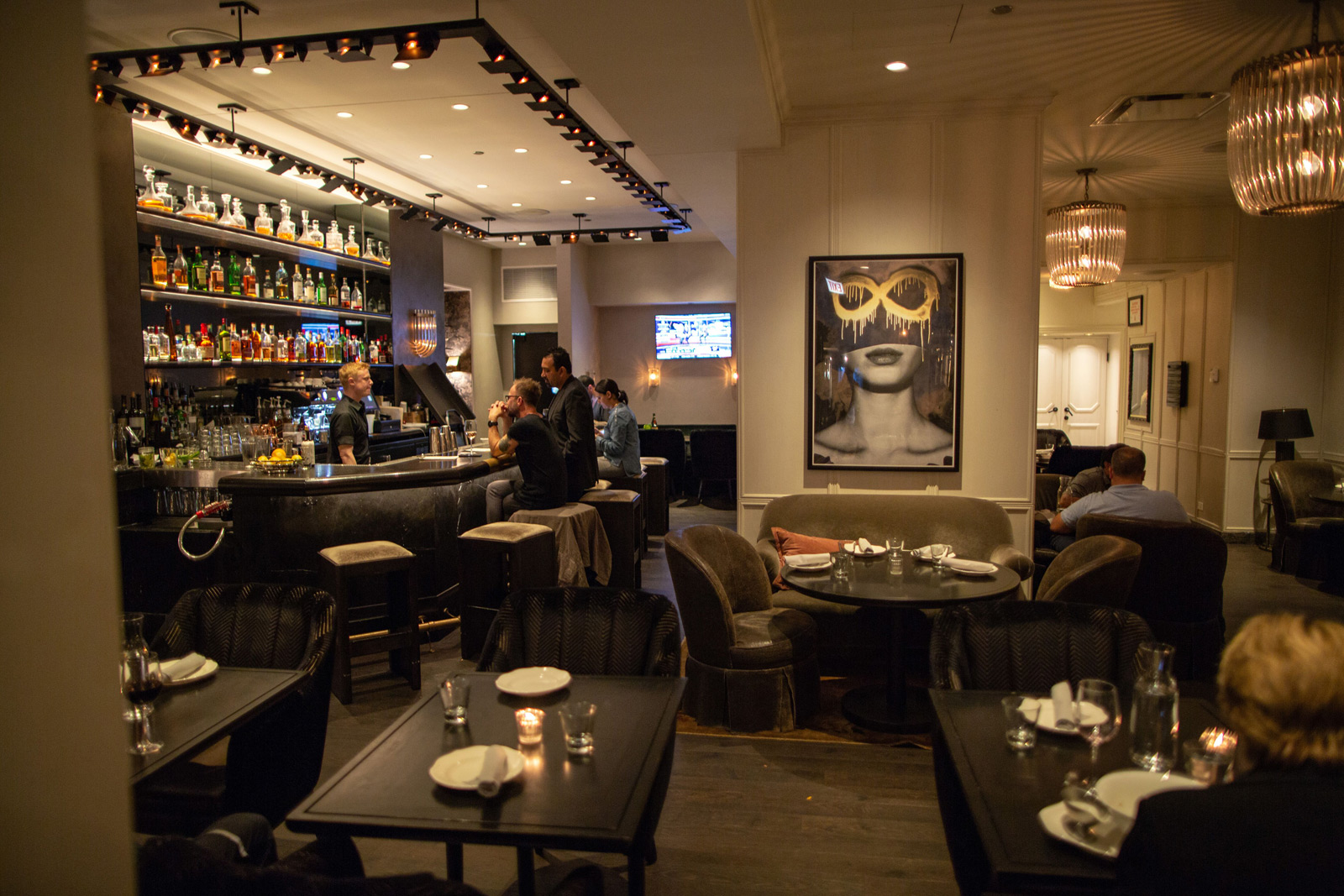 A newer restaurant in the lobby, called 20 East, has a lively, but not overly boisterous, that keeps the lobby exciting, and that first free welcoming drink at the bar is the perfect antidote to a drive down to the Windy City in Friday afternoon traffic. 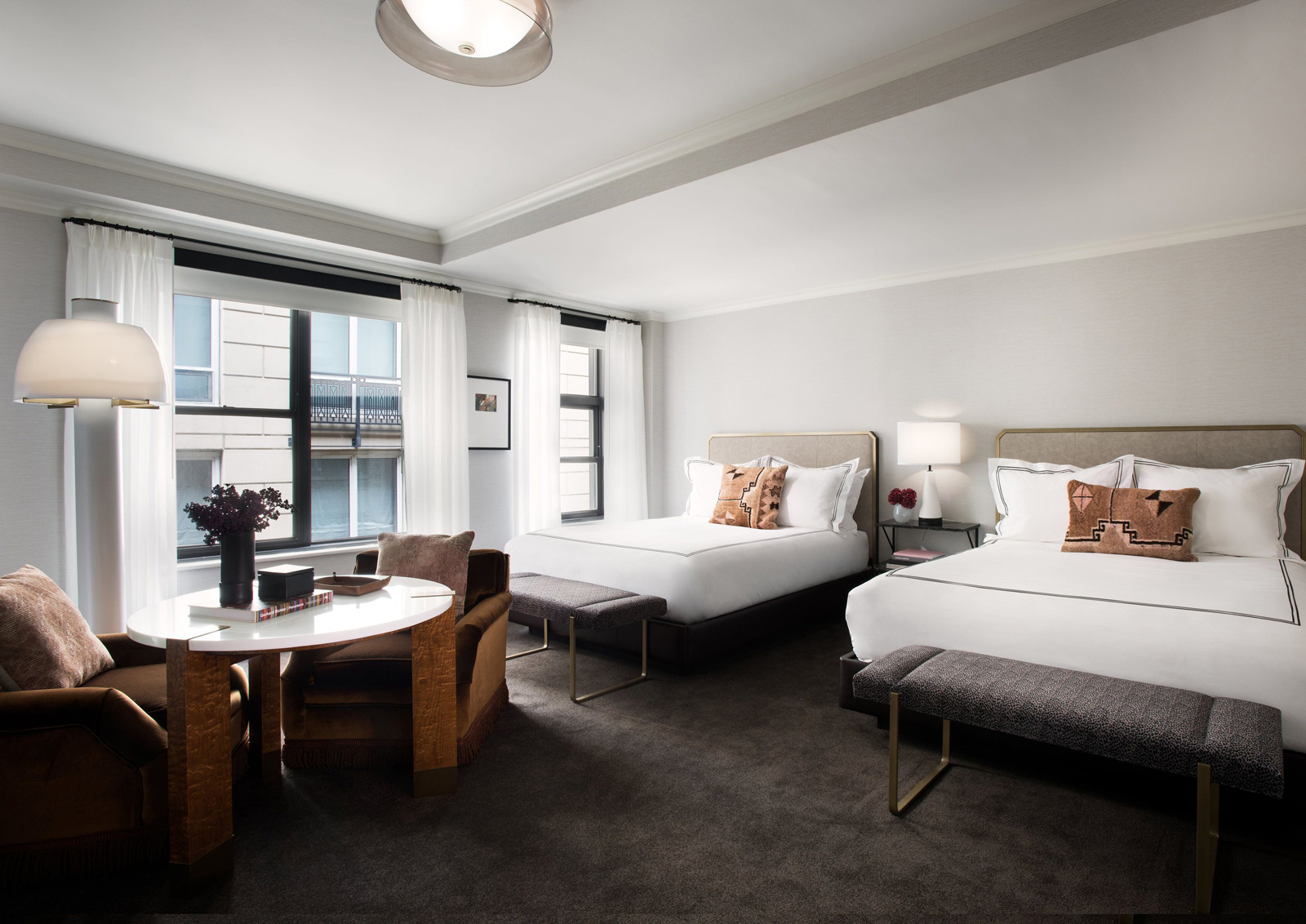 While we were there, we returned to see a couple other veteran pals, albeit ones we hadn’t visited in a few years.

The Art Institute of Chicago served up "Rubens, Rembrandt, and Drawing in the Golden Age," open until Jan. 5, 2020, offering a deep dive into the development of the most basic of art skills among Dutch and Flemish masters like Rembrandt van Rijn, Peter Paul Rubens, Hendrick Goltzius, Gerrit von Honthorst, Jacques de Gheyn II and others. 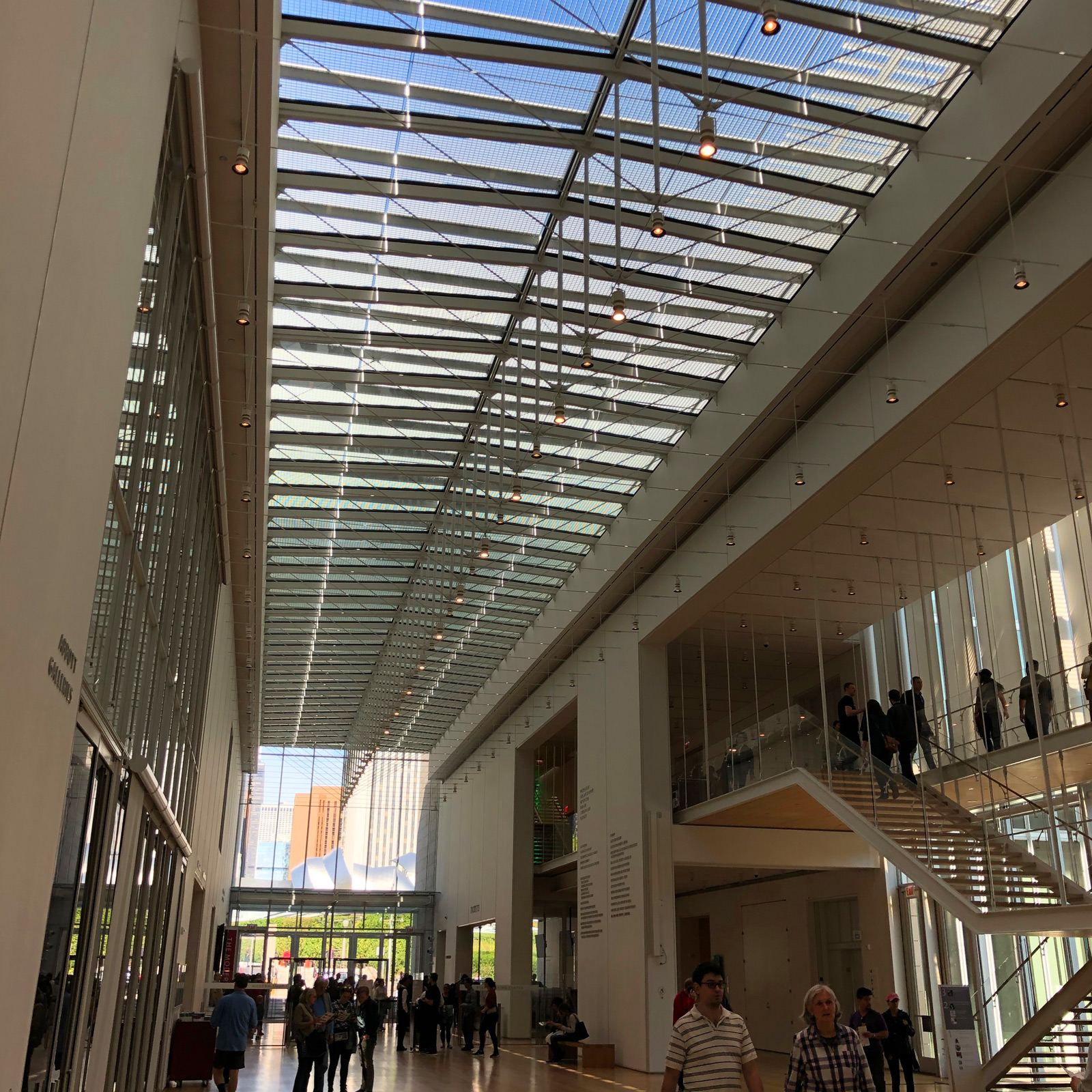 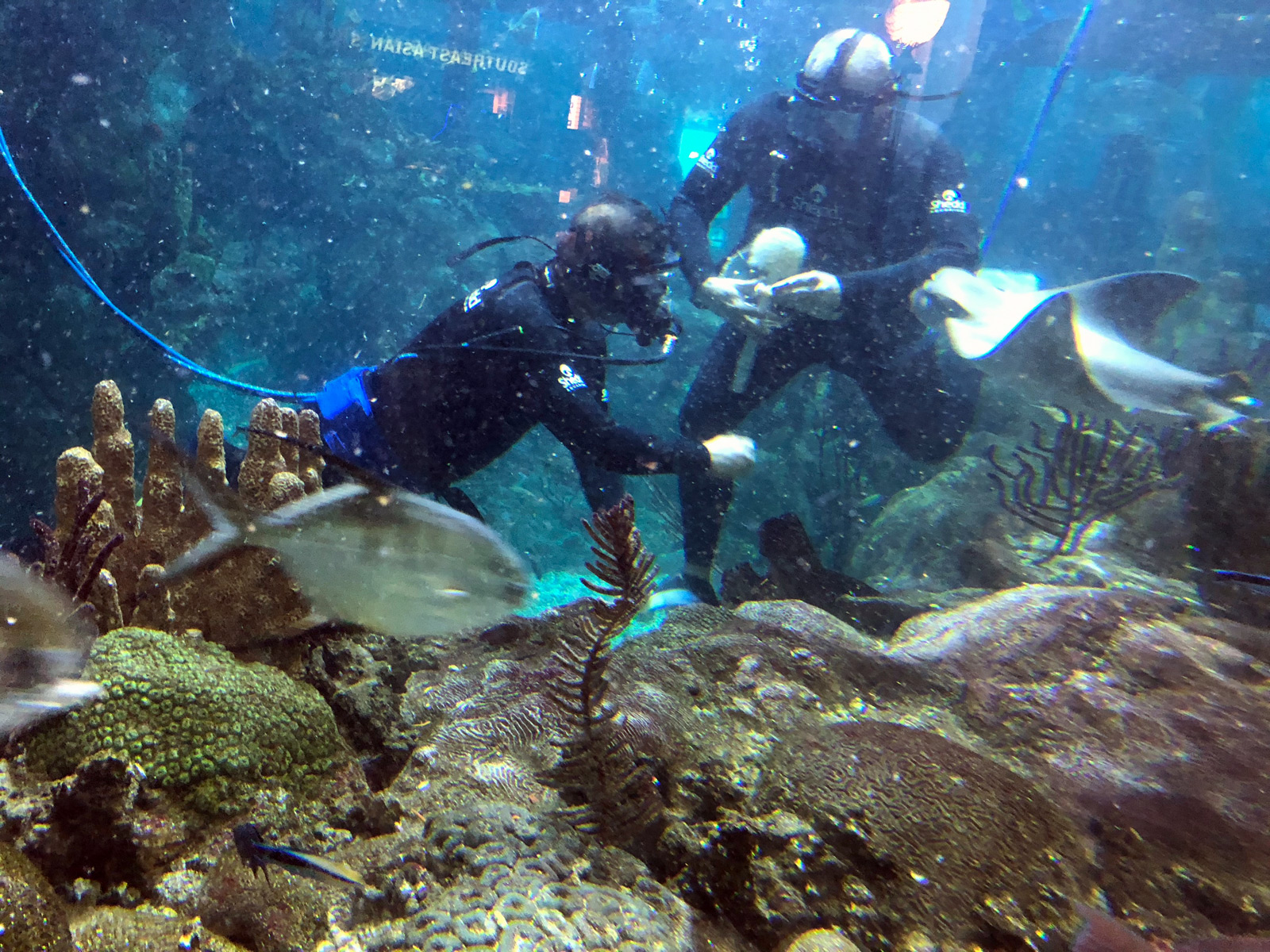 Then, a stop at the Shedd Aquarium reacquainted us with the sea stars – which we could touch – the always active otters, the giant and ever-engaging Caribbean reef and, thanks to the Underwater Beauty exhibition, the stunning array of colors and patterns that can be found beneath the water’s surface.

And because we timed our visit poorly for getting a seat at the dolphin show in the Rice Amphitheater in the Abbott Oceanarium, we went down one level and watched the show from underwater, giving us a new perspective on a show we’d seen a few times before.

When it came time to renew our energy, we decided to branch out and get adventurous again, seeking out some new experiences.

For breakfast, especially if you stay at The Talbott, there’s no better place than Walton Street Kitchen and Bar, which is just around the corner. 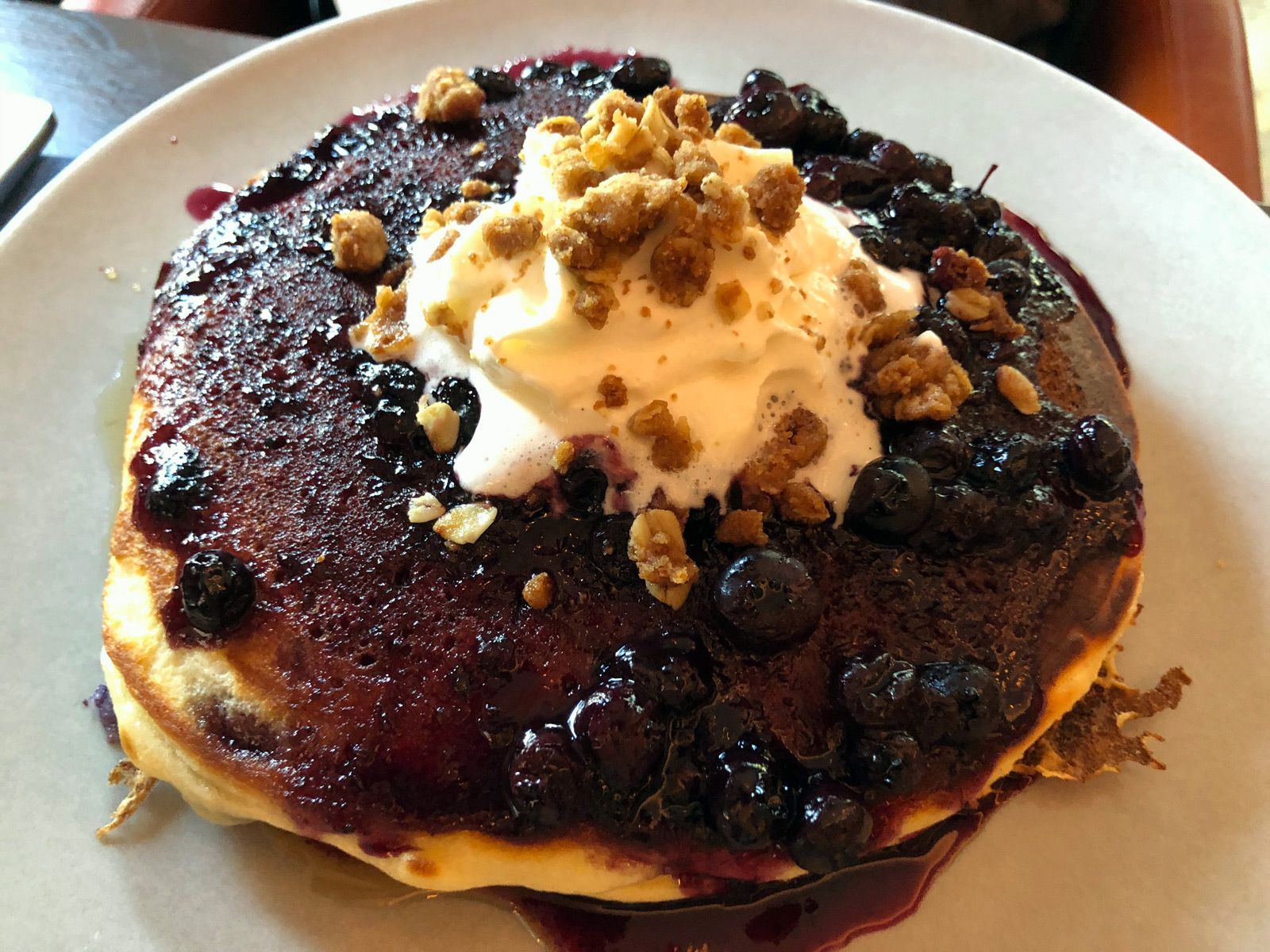 The interior is sleek and modern, attractive yet casual, and perfect for a family brunch, especially if you order the blueberry pancakes, which are hearty and delicious and swimming in whole blueberries, but also maple syrup, Chantilly cream and oatmeal crumble.

It’s sinfully good. And parents know it pairs well with a mimosa.

For lunch, I hustled the kids over to the Red Line to take the train up to see Chicago’s by-now classic craft brewer, Half Acre Brewing, which has two North Side locations. 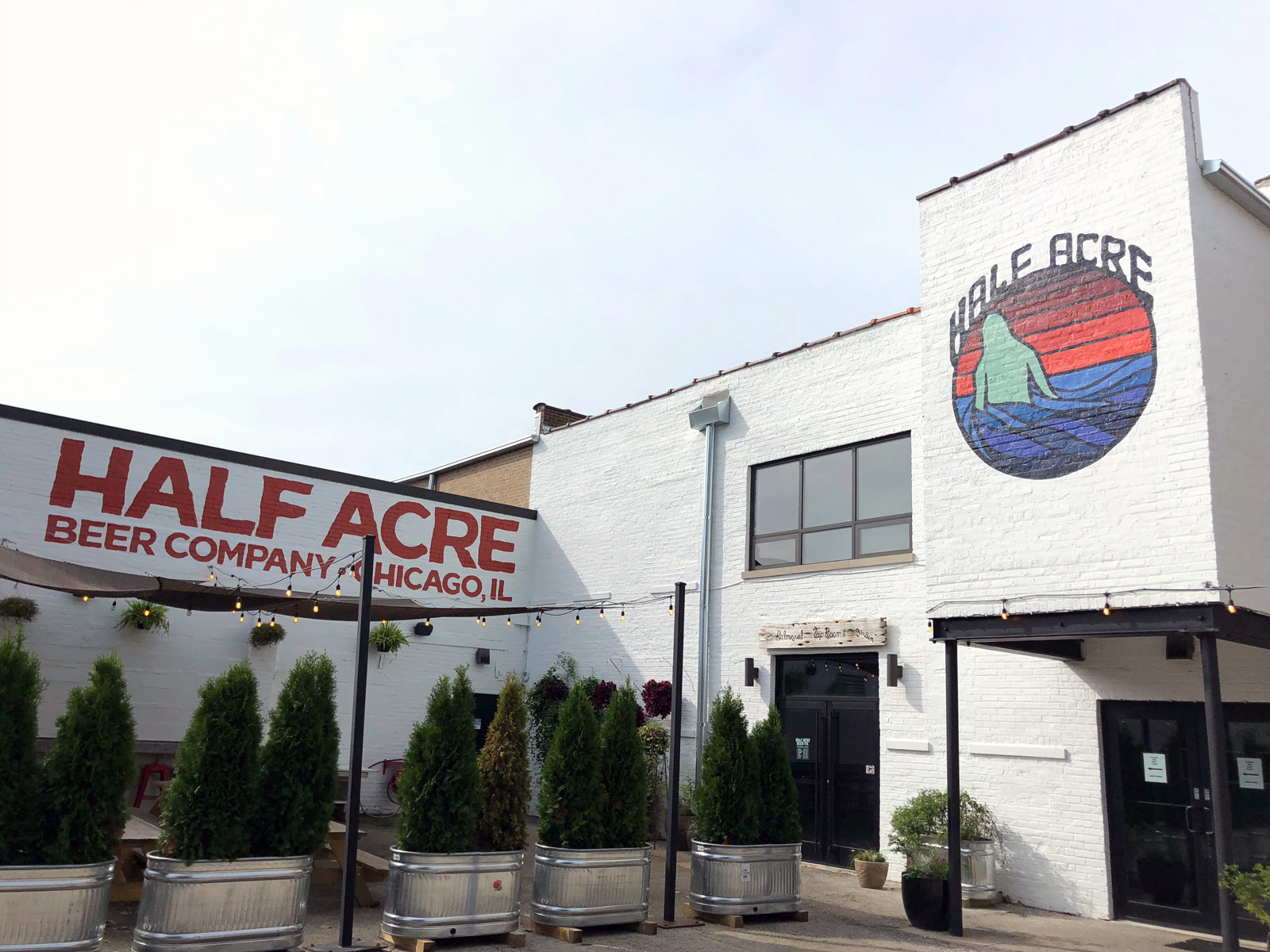 The original brewery and taproom is smaller, with its own vibe and menu and beer specials, but we headed a little farther up to the Balmoral place, which opened in 2015, massively boosting the brewery’s brewing capacity – which was required in good part by the smashing success of its Daisy Cutter American Pale Ale.

After a tour of the brewery – which you should definitely not miss – and a walk through the history of the building and of Half Acre, we had lunch in the tap room, which offers the ability to sample Half Acre’s broad list of brews, but also the benefit of a stellar lunch menu interesting takes on familiar dishes. 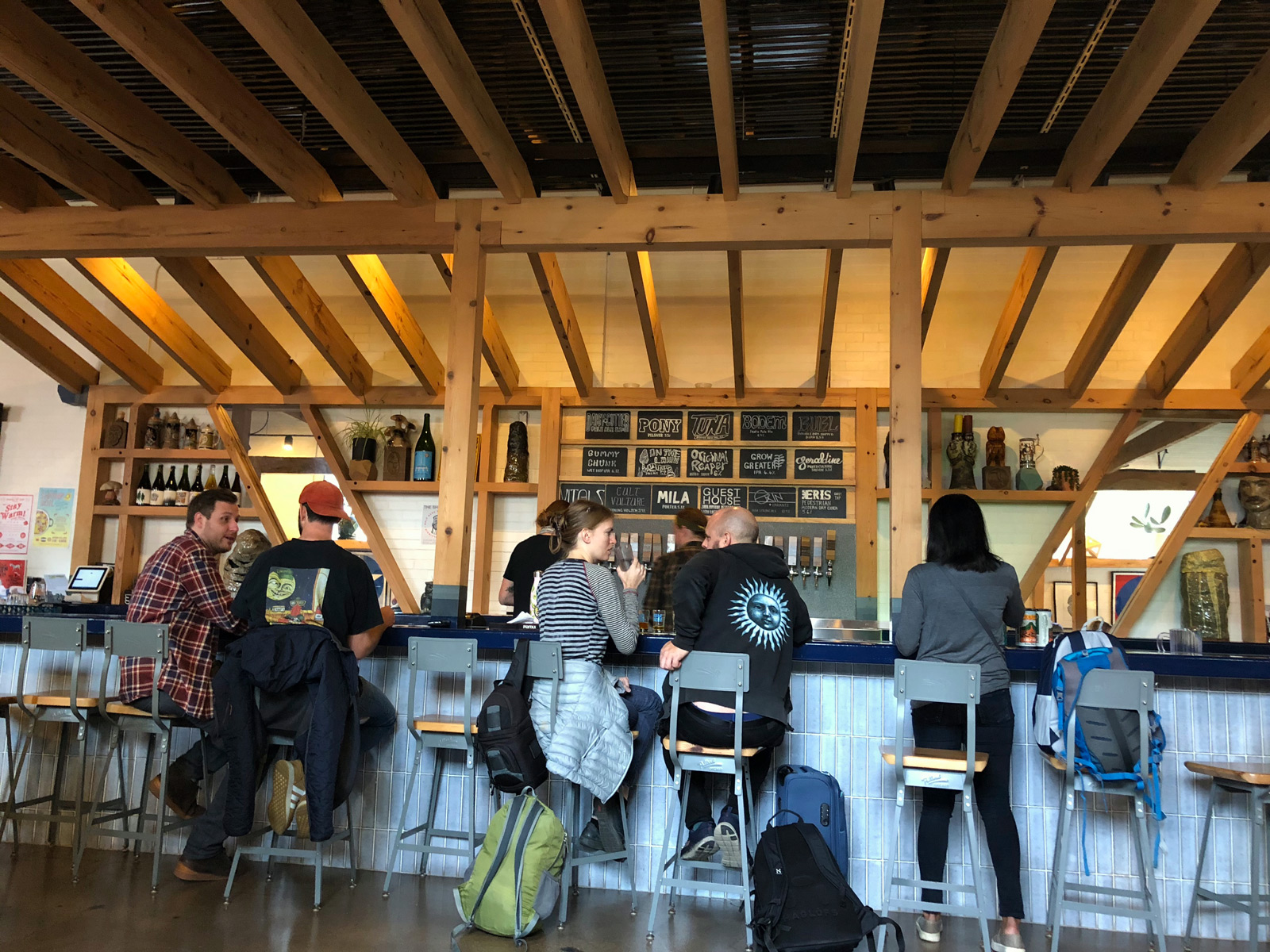 The tangy mac ‘n’ cheese, boosted with fontina along with white cheddar, was a hit, as was the giant grilled cheese laced with strips of pastrami.

I had a brisket cheesesteak sandwich with provolone and fontina, topped with cherry peppers and caramelized onions and a horseradish-chive aioli on a soft hoagie roll ... and I’d do it again. 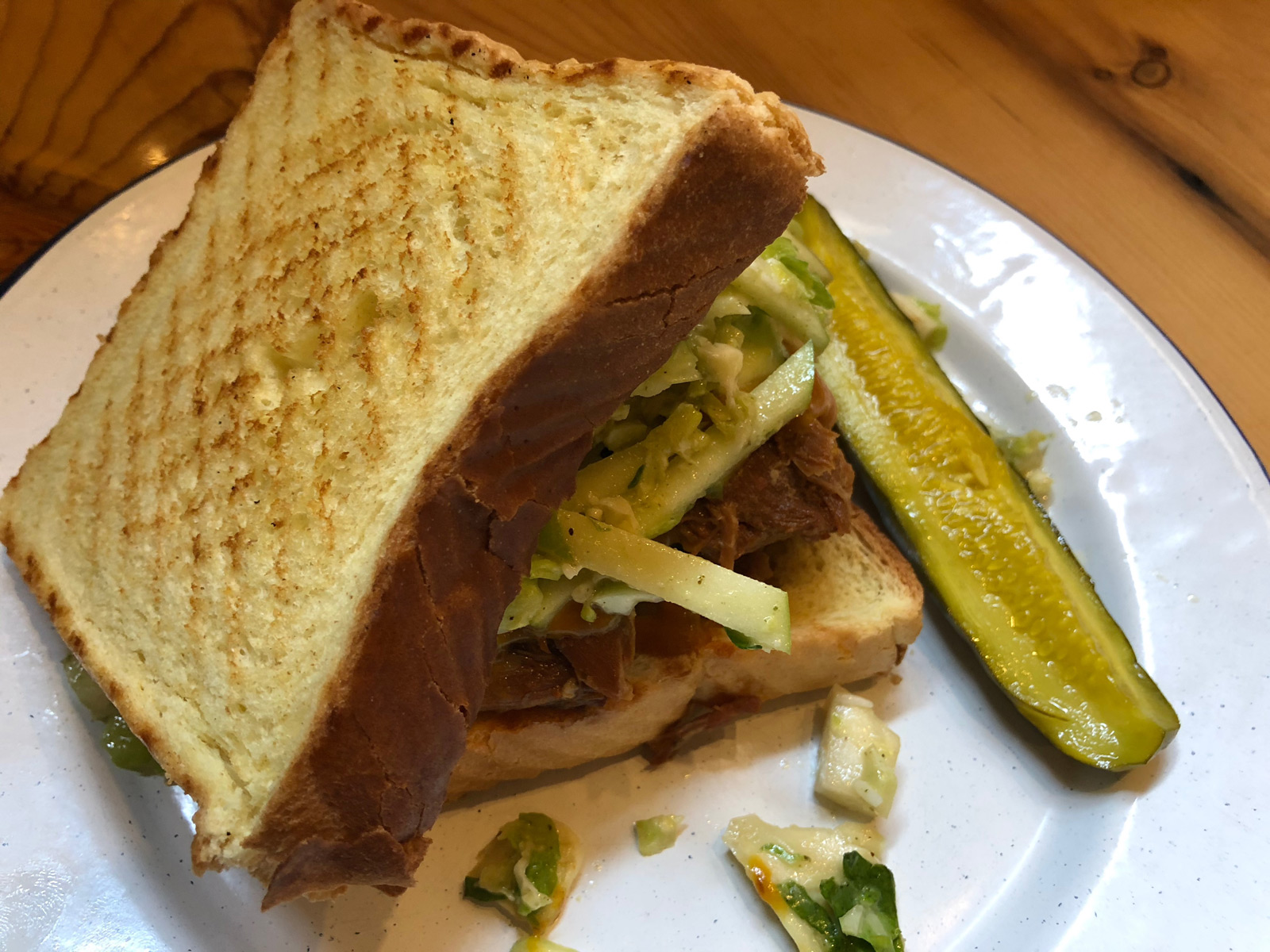 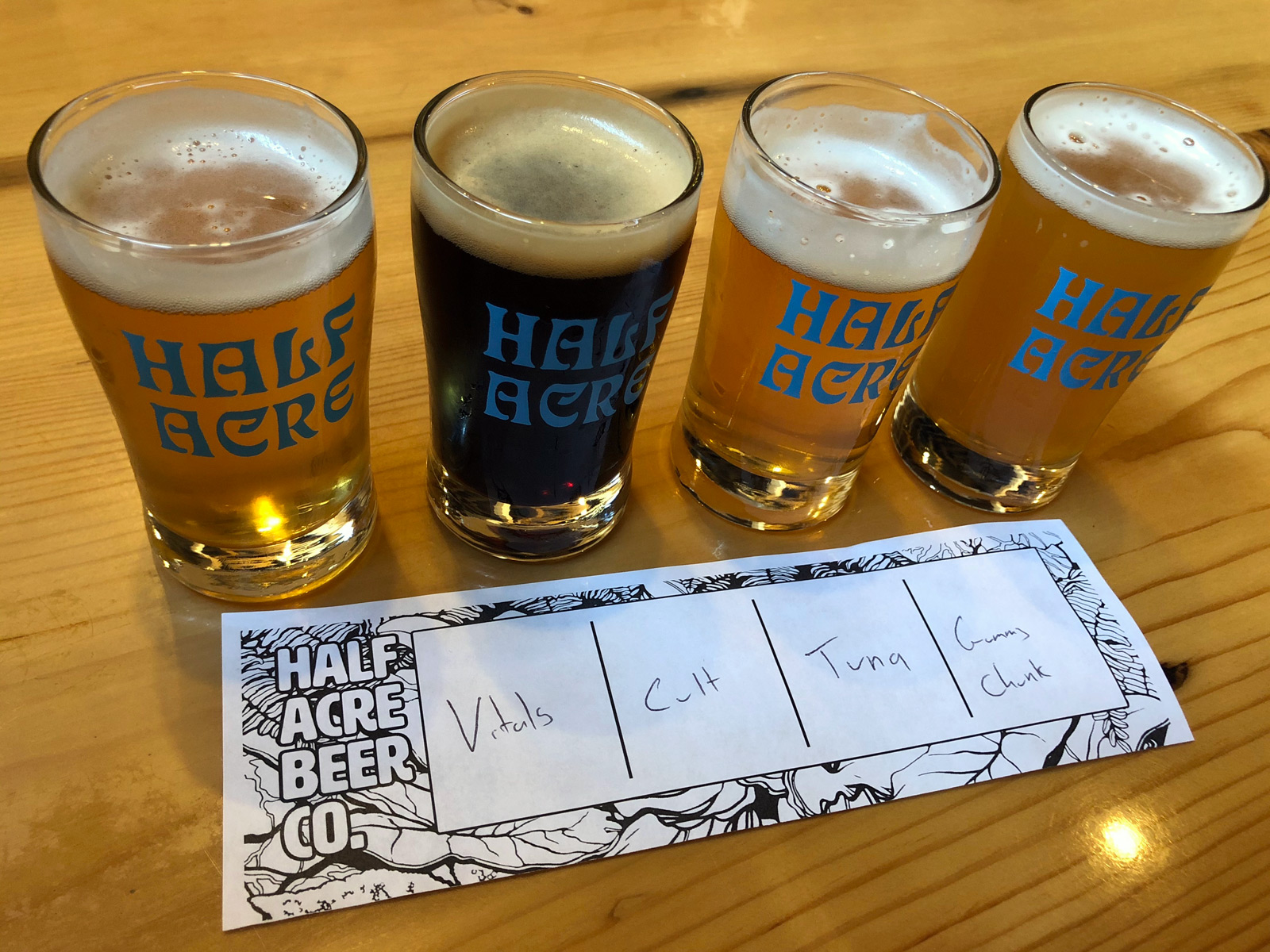 Thanks to the beauty that is the brewery tap room tasting flight, I took a good swipe across the beer list, too, and while Daisy Cutter and Pony pilsner are solid flagship beers, it’d be a shame if you didn’t dig deeper and meet specials like the powerful Orin bourbon barrel stout, Gummy Chunk wet hop IPA with its blend of resin and fruit and the lightly funky Geraldine mixed culture saison, to name but a few.

By the time dinner arrived, I was craving some whiskey and an impressive list of bourbon and other American whiskeys, Irish whiskeys and Scotch led me to The Dearborn Tavern, a dark and lively modern, upscale American tavern, with a friendly staff, some great comfort food and THAT whiskey list. 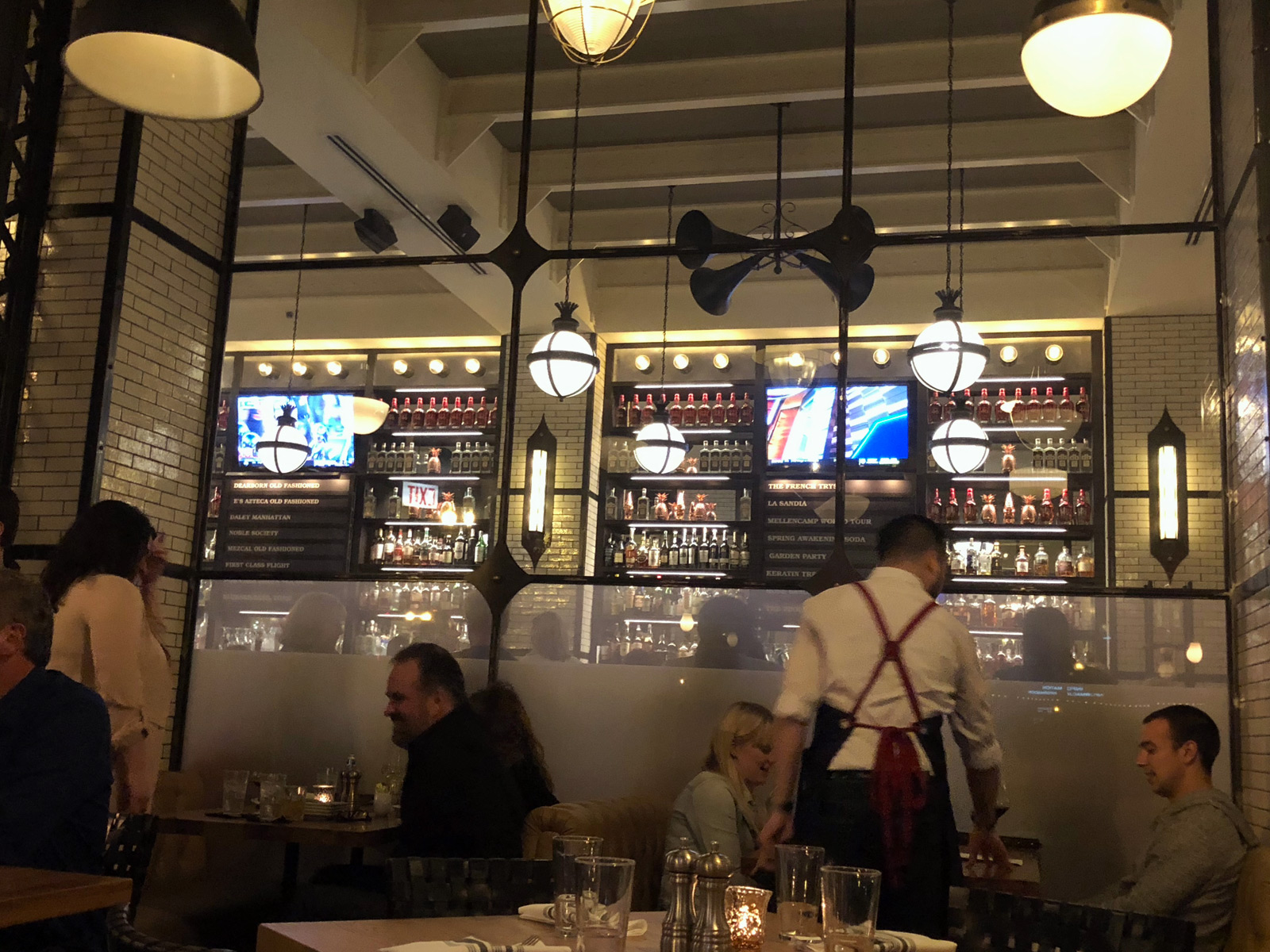 We started out with some incredible blue crab-filled hush puppies – and a Tyrconnel for dad – before an incredible chicken fried steak. Though it’s something I don’t typically order, this Delmonico ribeye arrived perfectly pink, with a friend buttermilk batter that wasn’t even a touch greasy. Add the frizzled onions, housemade steak sauce and whipped potatoes elevated with truffle and chives and ... magic.

The Miller Amish chicken and gnocchi, with roasted garlic-mustard chicken, housemade gnocchi and a blend of fava beans, English peas, baby carrots, chanterelle mushrooms and a truffle-dijon creme sauce was also a hit, though a few more gnocchi would’ve made one diner even more happy. 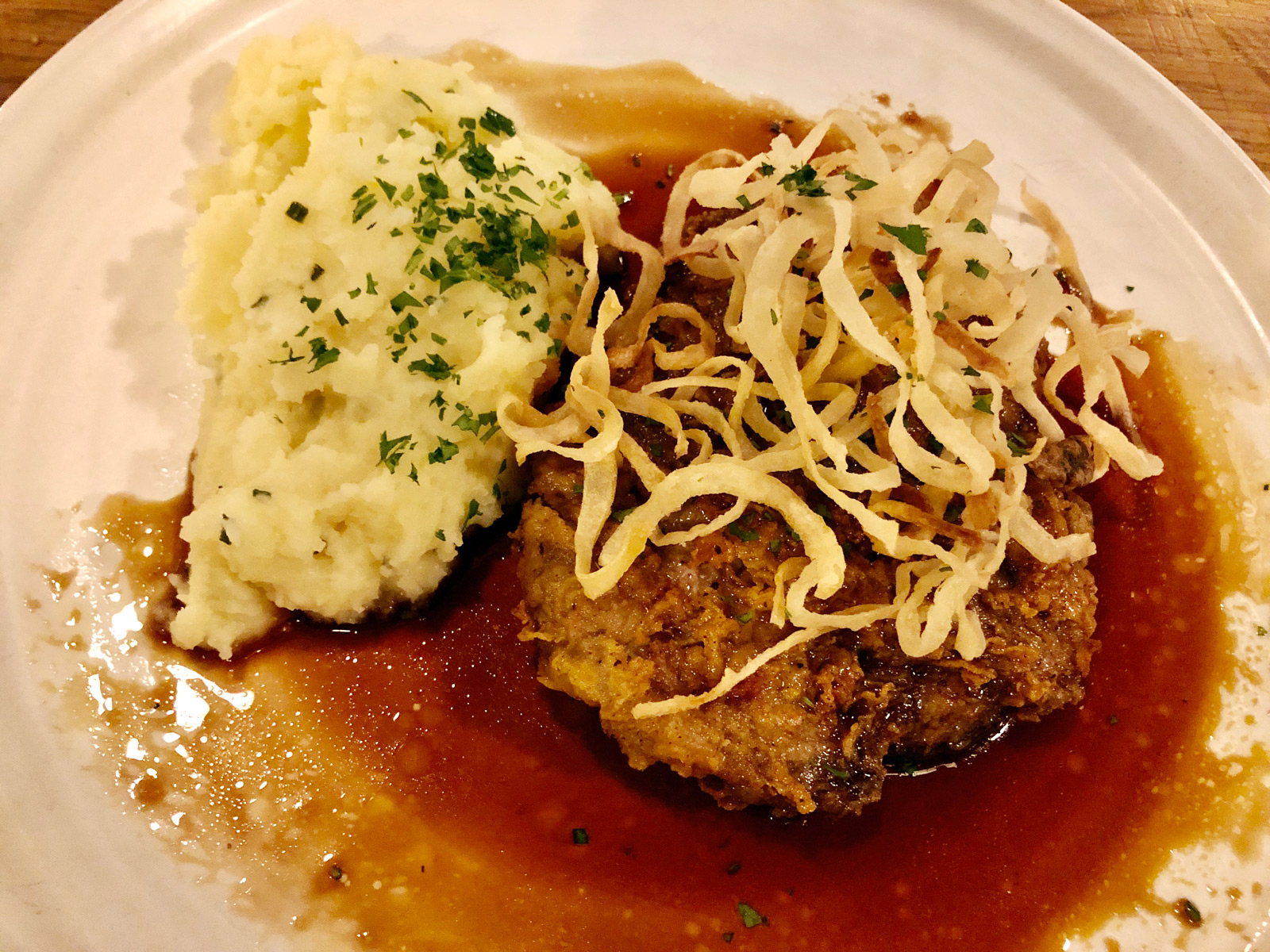 But, in the end, more pasta would’ve been unnecessary because two of us erred by each ordering a banana hazelnut crunch cake, a towering dessert of banana cake layered with hazelnut whipped ganache, drizzled with chocolate, a scoop of hazelnut crunch ice cream and malted milk jam on top. Two slices of candied banana on the side completed this hefty and heavenly gem.