Milwaukee will have a presence at this weekend' Indy 500 thanks to a partnership between AJ Foyt Racing, Belardi Auto Racing, James Davison and Central Standard Distillery.

Milwaukee’s own Central Standard Distillery will make its debut at the Indianapolis 500 this weekend.

Thanks to a fortuitous partnership with AJ Foyt Racing, Belardi Auto Racing and 31-year-old Australian-born driver James Davison, the Central Standard logo will adorn the pole position on the hood of Davison’s #33 car.

A bruised Davison made it into the finals despite a crash last Friday that he called the "biggest of [his] career."

A rollercoaster 24 hours after the biggest crash of my career. My phenomenal crew rebuilt the car throughout the night and we made it into the #Indy500. I’m battered and bruised but it was all worth it. 🙏🏽🏁🇺🇸 pic.twitter.com/mUSxnyzO9K — James Davison (@JD33Davison) May 20, 2018

But after whipping up the 33rd and final spot on Saturday, Davison saw a dramatic increase in speed on Sunday with an average of 226.255 mph, putting him a very solid 19th on the grid.

It's put Davison in the spotlight as one of the favored underdogs of Sunday's race. And, with Milwaukee cheering him on, there's hope he'll make a splash at the finish line. 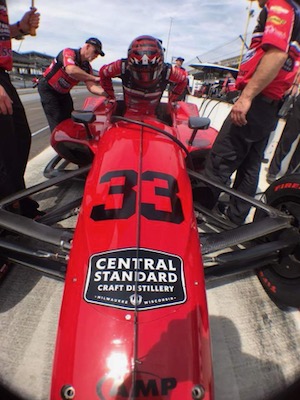 Although it’s customary for winning drivers to chug a glass of ceremonial milk, Central Standard co-founders Evan Hughes and Pat McQuillan have high hopes that there will also be a celebratory glass of Central Standard Spirits in Davison's hand after the race.

"It’s fine for James to chug the ceremonial milk after he wins," said Hughes."We’re excited that after the cameras have turned off that Davison and his crew will finish any post-victory celebration with a toast using our Central Standard Straight Bourbon."

Of course, Hughes and McQuillan are also inviting Milwaukeeans to celebrate their potential racing victory by hosting a race viewing party at their Walker’s Point tasting room at 613 S. 2nd St. beginning at 11 a.m.

Hughes notes that anyone who makes a purchase Sunday at the tasting room will also take home a free bottle of Central Standard spirits ... if Davison wins.