I have a kid who is a great artist and is really interested in engineering, too, so I admit I probably edge toward the nudge too much when I give him books about architecture and point out interesting buildings. But he didn't seem to mind on our last design-themed trip to Chicago.

As any parent knows, the line between nurturing and (over-)nudging can be a thin one, and it’s one I try not to overstep (too often). But I have a kid who is a great artist and is really interested in engineering, too, so I admit I probably edge toward the nudge too much when I give him books about architecture and point out interesting buildings.

He didn’t seem to mind when we did an architecture-themed weekend in Chicago a few years ago, probably because it included a fun LEGO architecture class.

This autumn, I brought him back to the Windy City for a little round two.

We set up camp at The Langham, 330 N. Wabash Ave. in River North, to my mind one of Chicago’s finest hotels, with a great location, comfortable, clean and attractively modern rooms with great views out over the river, as well as stellar family-focused amenities like a pool, a cinema suite and a play suite for kids that includes a nice video game setup. 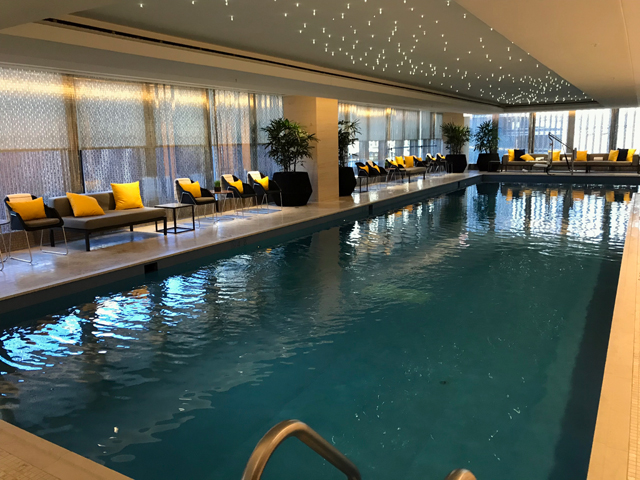 But because The Langham is located in the IBM Plaza, it also offers a great conversation starter about architecture. Designed by innovative architect Mies van der Rohe – who died before construction began – the 1973 building is on the National Register of Historic Places for its "distinctive characteristics of the Modern Movement," with its sleek lines, and black steel and glass design that would inspire so many buildings that followed.

It’s an opportunity to talk not only about Mies’ buildings and his enduring influence but also about how architects consider things like siting, too. Here, the architect put the building on the north end of its lot to accommodate not only subterranean issues like subway lines, but also to preserve views along the river out toward the lake for others living and working along the Chicago River corridor.

We also visited the Chicago Architecture Biennial, which features the work of more than 140 architects and artists from nearly two dozen countries at events and exhibitions scattered all over the city, including art exhibitions, films, talks and more. 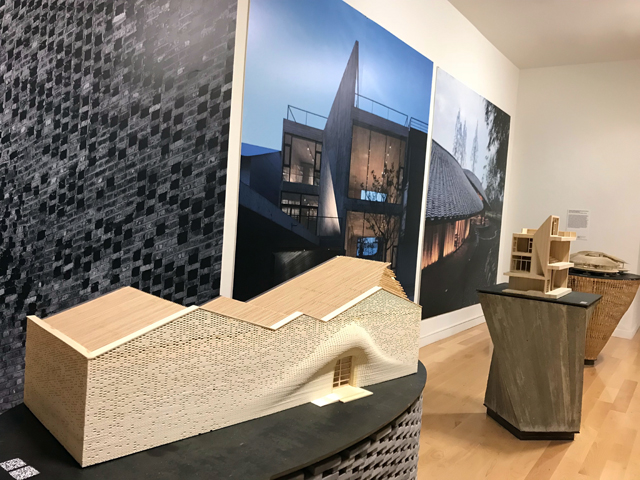 The design festival – which runs through Jan. 7, 2018 – is free and open to the public and complete details can be found at the website.

In the interest of maintaining focus – and our feet – we explored the festival’s main venue: the gorgeous neoclassical Chicago Cultural Center, 78 E. Washington St., which had long served as the city’s central library. 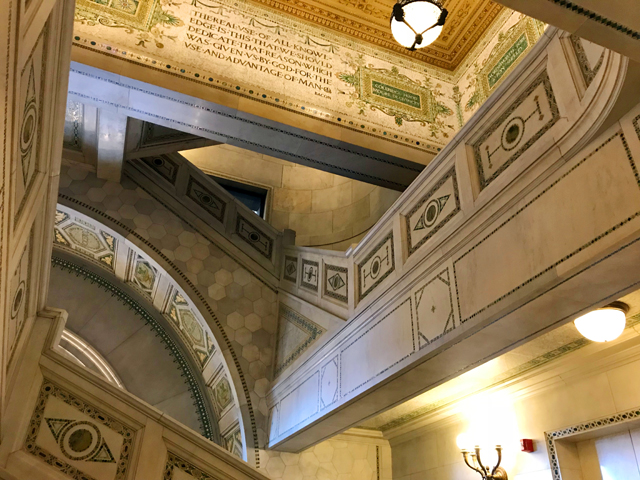 Here we checked out gallery after gallery of architectural- and design-themed art installations and exhibitions that often combined photographs, models and other media not just of buildings but often abstract works from fertile minds looking for new voices and means of expression in architecture.

These works offered a valuable lesson to a young artist on the importance of exploration, of tinkering, of pushing boundaries and of finding meaningful ways to incorporate the lessons learned from this inquisitive approach into designs. 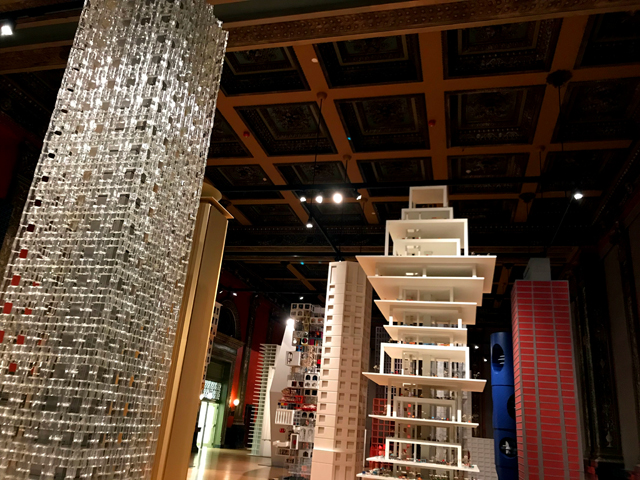 Be sure to check out "Vertical City," which has nearly 20 16-foot-tall building models that re-imagine Chicago's landmark Tribune Tower.

Often I found my child oohing and aahing over the Cultural Center building itself, which is the perfect lead-in to taking a walking or boat tour over at the Chicago Architecture Foundation, 224 S. Michigan Ave.

We also took a ride on the El loop so that we could get an up-close look at the new Calatrava-influenced Washington/Wabash station (designed by exp). 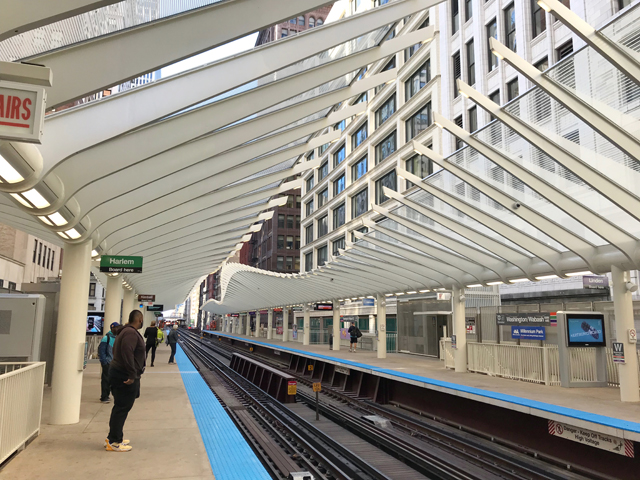 A couple weeks later, I returned to Chicago – adults-only this time – and did a little more nosing around town, thanks to Open House Chicago, that city’s equivalent to Doors Open Milwaukee. 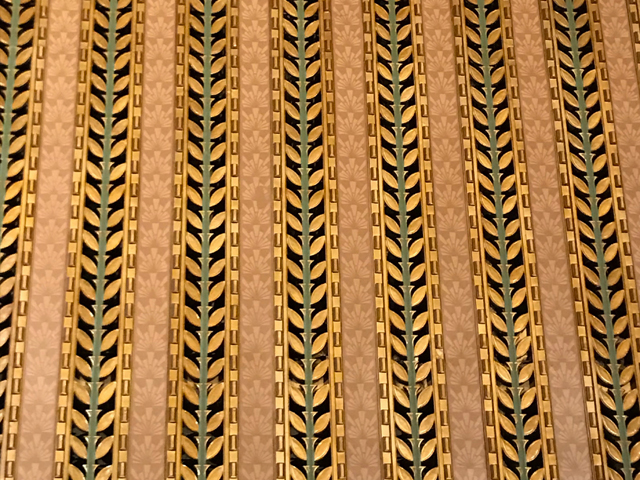 Because of – or despite – torrential rain, we managed to hit a handful of sites within a relatively tight area, including the Lyric Opera (pictured above), the City Halls, the eye-catching Carbide & Carbon Building, the Builders’ Building and the McCormick Bridgehouse & Chicago River Museum, which I highly recommend for its mix of historical photos and information about the river alongside the opportunity to see the massive gears and other inner workings of the Michigan Avenue bridge. 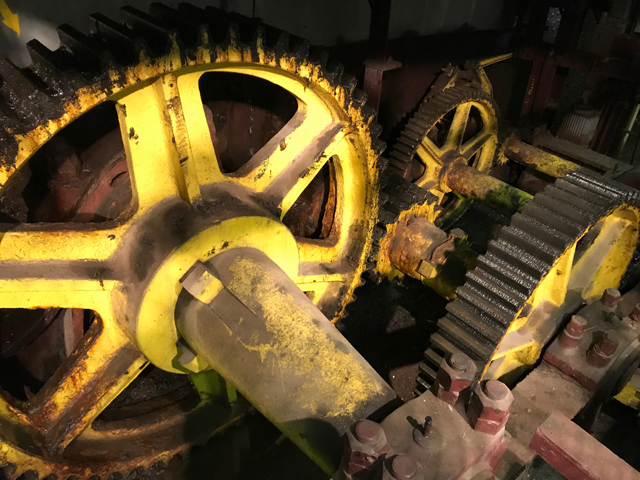 Though this annual event has already passed, mark your calendar for next year’s event in October, because it’s a great way to see – for free! – a couple hundred Chicago spaces you can’t always explore and get a fresh look at a familiar landscape.

For this trip we stayed at the Ace Hotel – 311 N. Morgan St. in the ever-more booming West Loop neighborhood – which opened in July in a former cheese factory. The renovated building offers an interesting look at how new and old can be married in a project like the Ace. 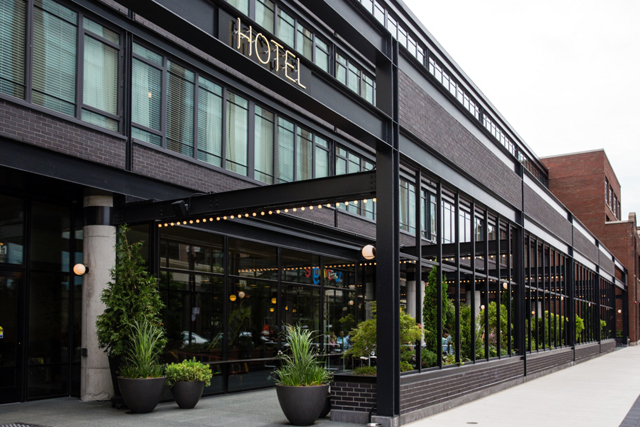 Chicago’s GREC Architects worked to incorporate Mies van der Rohe’s Bauhaus modernism – deeply ingrained in the Chicago landscape – into the existing structure without erasing all traces of the cheese factory that operated in what is called the Fulton Market district of the area. The result is a bright, modern structure that feels anchored to its site by the facade of the old factory.

Inside, the rooms have a similar modern-industrial vibe with exposed concrete ceilings and supports, plywood built-ins and polished steel bed frames.

Just across the street, a new cocktail bar opened that was also pitch perfect.

Prairie School, 326 N. Morgan St. – as the name implies – riffs on the work of Frank Lloyd Wright in its decor. Leather coasters and even ice cubes are embossed with Wright-like designs and the menus and business cards are executed in the instantly recognizable Wright style. 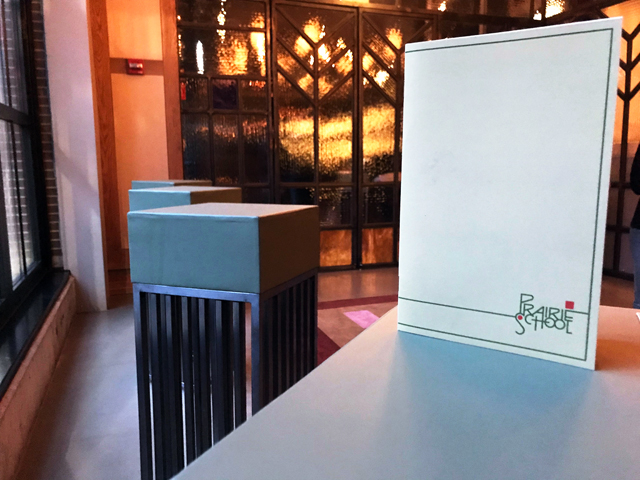 There’s a cocktail called "Falling Water," and another called "Tall Boxes," a brandy old fashioned, which the menu describes as a, "much-maligned style of old-fashioned (with muddled orange and cherry)," that "became popular around the time period Frank Lloyd Wright began deriding skyscrapers, calling them ‘tall boxes’."

The food menu is small – just bar bites, really – but it does nod at Wright’s Wisconsin roots via the inclusion of fried cheese curds and a bratwurst.

The drinks aren’t cheap – about $15 – but they are really well-made and with interesting flavor combinations that make Prairie School worth a visit on your Chicago architecture and design jaunt.