Craft brewers are sweet on chocolate

Although we're conditioned to consider a box of chocolates to be the perfect Valentine's Day gift, perhaps nothing says Valentine's Day in Brew City quite like a chocolate beer. Although beers crafted with chocolate and cocoa are not new - in Milwaukee or beyond - it sure seems like there are more of them than ever.

Although beers crafted with chocolate and cocoa are not new – in Milwaukee or beyond – it sure seems like there are more of them than ever. Chocolate stouts, for example, abound.

In Milwaukee, most brewers make at least one variety that incorporates the pleasures of the cacao plant.

"Our chocolate peanut butter is a smash hit, we have a hard time keeping it on the shelves," says Sauer. "The chocolate cherry had a good run, but we decided to scrap it in place of the peanut butter. Also our brownie porter won a gold medal at the Great International Beer and Cider competition last year. Chocolate has tended to prove as a pretty successful ingredient for us."

Milwaukee Ale House has made a chocolate weiss bier and Rock Bottom sells its Milwaukee Black Sheep Chocolate Stout. Among the Leinenkugel’s beers that incorporate cacao of some kind are the Smoked Chocolate Porter and the new Winter’s Bite Cocoa Spice Black Lager.

Brenner Brewing in Walker's Point partnered with local radio station FM 102/1 on a new brew that has chocolate and coffee components. Listeners voted for the flavors they wanted and are currently voting on a name. The beer and its name will be launched at a tapping party this Friday night at the Walker's Point brewery.

In 2005, MillerCoors launched Temptation Bock, and, later, Frederick Miller Classic Chocolate Lager. The limited edition beer is available only around the Christmas holiday, and only at the Miller Inn, to coincide with the brewery’s Holiday Lights exhibit. 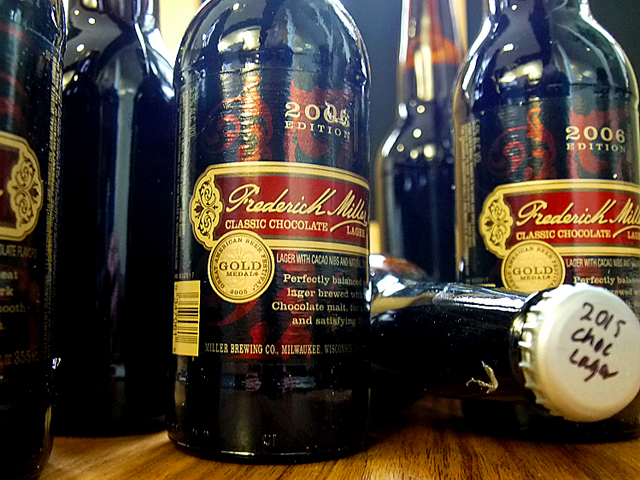 Sauer says there are many interesting chocolate brews made outside Milwaukee that have caught his attention, too.

"Neapolitan milk stout is quite the interesting brew," he says. "Saugatuck is starting to branch out – I had to pick these up in Minnesota. I love milk stouts and anything with cacao nibs. You will see a lot of imperial stouts this time of year. I just had an Epic Brewing Russian Imperial aged on cacao and coffee in whiskey barrels. It’s wonderful when the lights are dimmed, the jams are roaring, and you got a nice read in front of you."

"Our brownie utilizes USDA certified organic bolivian cacao nibs from Tabal Chocolate – a local company that excels in crafting small batches of chocolate in our local Milwaukee – this is a true balancing act, a liquid brownie in a glass. Our chocolate cherry leaned toward the cherry side and didn’t see a ton of success. With all that in mind, I prefer to err on the side of chocolate."

But, says Sauer, the craft beer crowd is an adventurous one, willing to most anything, and willing to indulge the passions of brewers.

"We cater to a pretty promiscuous crowd of beer drinkers and that’s what makes the job so interesting – its essential for a brewer to tame his ego, but at the same time to let his soul shine through the liquid," he says.

"Most craft drinkers, at least, will appreciate the thoughtfulness if you can explain it to them and guide them through a sip. In the end, it’s the liquid that matters and its important to understand and listen to your consumer base. You want to please the customer, but you can’t stray too far from your vision or else your purpose for that beer becomes muddied and unclear."

Like a good artisan, also sees chocolate as a common ground where crafters working in a number of media can connect and work together.

"Collaborating with other passionate craftsmen is a not-so-secret side hobby of brewers," he says. "Chocolate makers can grow as a craft just like beer, and the craft community is often more than happy to help foster that. When crafts win, be it craft meats, craft cocktails, craft chocolates, we all win. It’s about educating your consumer about what they deserve to be eating and drinking. Ultimately, it’s up to the community to decide – we provide."