"Let’s goooooooooo!" has now become "He did!"

The final ballot was as follows: 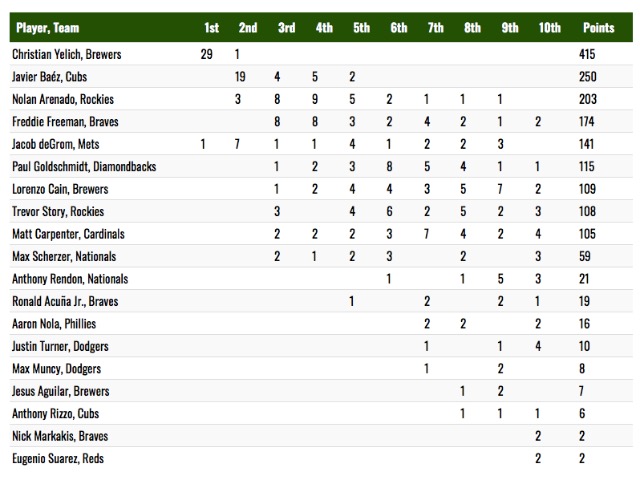 The MVP race flipped in the second half of the season, as Yelich’s torrid finish propelled the Brewers towards an NL Central title and an NLCS appearance. While Yelich raised his OPS from .823 in the first-half to 1.219 after the All-Star break, second-place finisher – Chicago’s Javy Baez – slipped from .892 to .866. Correspondingly, the Brewers’ winning percentage spiked from .561 to .631 following the break, while the Cubs’ fell from .596 to .565. Yelich put the final stamp on his MVP candidacy when the Brewers knocked off the Cubs at Wrigley Field in the division-deciding, Game 163 tiebreaker. Yelich finished 3-4 with an RBI in the victory; Baez was just 1-4 with two strikeouts.

Yelich now joins Rollie Fingers (1981), Robin Yount (1982, 1989) and Ryan Braun (2011) as the only Brewers to win MVP awards (and the first one to do so without a first name that starts with an R). The 26-year-old also bagged a Silver Slugger award and the NL Hank Aaron award, and was a finalist for the Gold Glove award in left field.

Yelich has long been one of the most underrated players in baseball, as he was overshadowed by fellow Miami outfielders Giancarlo Stanton and Marcell Ozuna earlier in his career and then had to share the spotlight with Cain when both joined Milwaukee on the same fateful day last offseason. But now, he will have a target on his back and will be forced to prove he is up for the challenge. It will be difficult for Yelich to post the same type of power numbers again – he somehow turned rankings of 39th in home run distance and 317th in launch angle into a whopping 77 extra-base hits. Still, at his young age, it’s reasonable to expect Yelich will continue to add layers and consistency to his game as he enters the prime of his career.

Baseball-Reference compiles similarity scores for every player; through age 26, the three most similar players to Yelich are Nick Markakis, Carl Yastrzemski (Hall of Famer alert!) and Andrew McCutchen. The Markakis comp is a bit uninspiring, though the outfielder did just earn an All-Star nod in his 13th season, while the Yaz dream seems a bit farfetched.

The McCutchen link seems more appropriate though. The longtime Pittsburgh outfielder won his lone MVP award at age 26 and was known for his quality defense, excellent on-base skills, good-not-great power and plus speed. He then backed up his 2013 NL MVP award with consecutive top-five MVP finishes in 2014 and 2015 as well. McCutchen fell off quicker than expected, but his peak seasons match the general expectations for Yelich – a very good player who probably won’t win another MVP award, yet is more than capable of anchoring the everyday lineup for a championship contender. From 2013-15, the Pirates averaged 93 wins and made the postseason each year. Yelich and the Brewers should hover around similar territory, and will hope to have better October luck than McCutchen’s Buccos did earlier this decade.

Only time will tell how Yelich ages with Milwaukee, but for the foreseeable future, the Brewers will build around the one of the game’s superstars. Throw in Cain and his position player cohorts, an intriguing pitching staff and a general manager willing to make a splash, and Milwaukee is set up to contend into the 2020s.

Brewers announce 2021 season and it's got some quirks