The Chudnow Museum of Yesteryear is currently featuring an exhibit spotlighting baseball in Milwaukee, focused heavily on the collection of local expert Paul Tenpenny. Among the balls, bats, jerseys, programs and other objects that tell the stories of the American Association Brewers, the Milwaukee Braves and the major-league Brewers, are some amazing films, too.

The Chudnow Museum of Yesteryear is currently featuring an exhibit spotlighting baseball in Milwaukee, focused heavily on the collection of local expert Paul Tenpenny. Among the balls, bats, jerseys, programs and other objects that tell the stories of the American Association Brewers, the Milwaukee Braves and the major-league Brewers, are some amazing films, too.

Two reels of film donated to the museum contain what may be the only film footage of the AA Brewers playing at Borchert Field on the city’s North Side during the 1930s.

Borchert – between 7th and 8th, Chambers and Burleigh, was home to professional baseball in the city from 1888 until 1952. 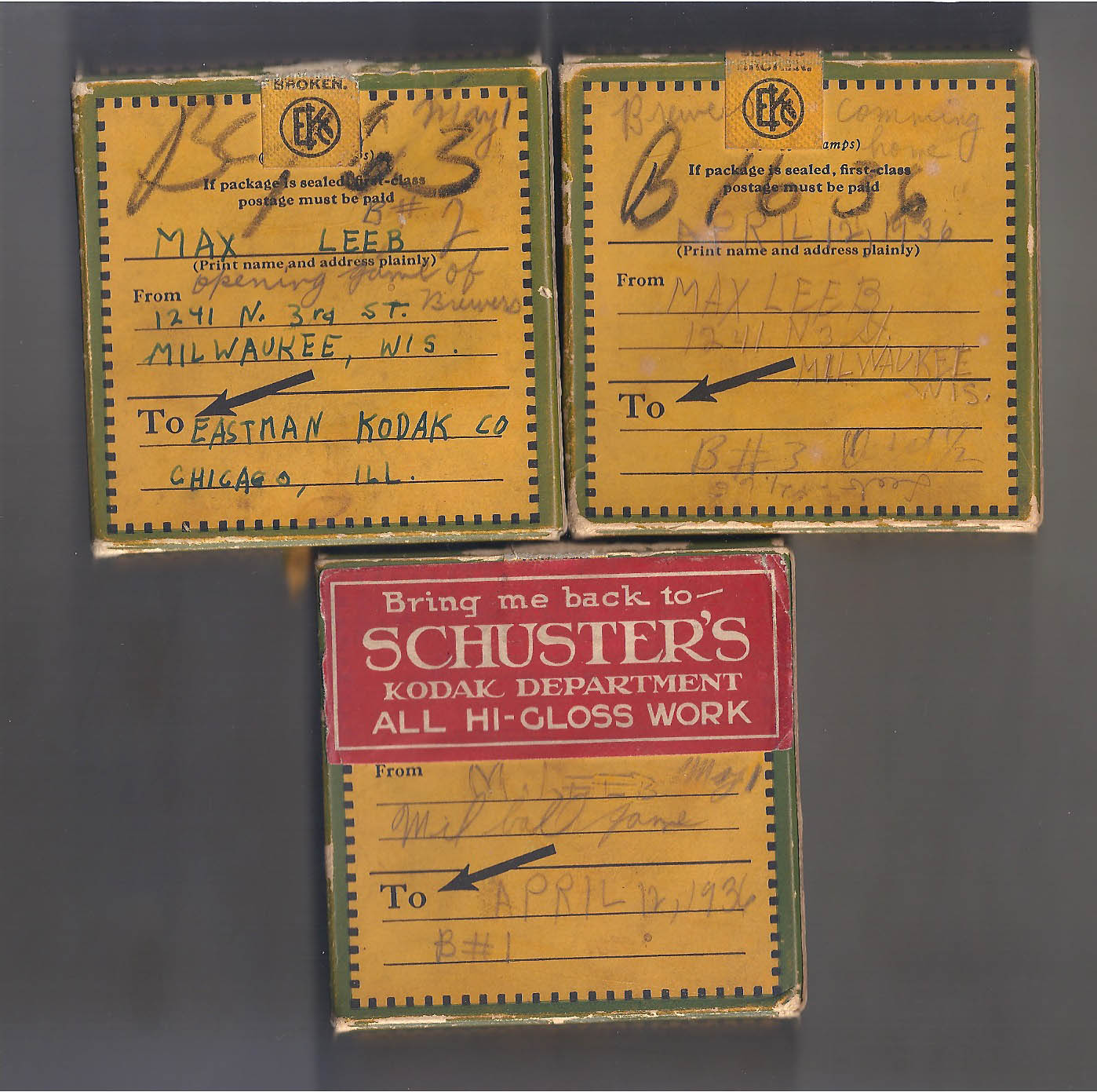 The three rolls of 16mm film were donated by Roberta Bloch, whose father Max Leeb, owner of Leeb’s Log Tavern (pictured below in December 1933), 1241 N. 3rd St., shot the footage.

There are some moments captured of a Brewers homecoming parade Downtown as well as some outside the tavern. But what’s most interesting is the footage from Brewers home games in May 1936.

The first game was the season home opener against Louisville on May 1, the same day as the parade. Just over 9,700 fans were at the game.

The Brewers had opened the season against the Colonels, too, albeit in Louisville. 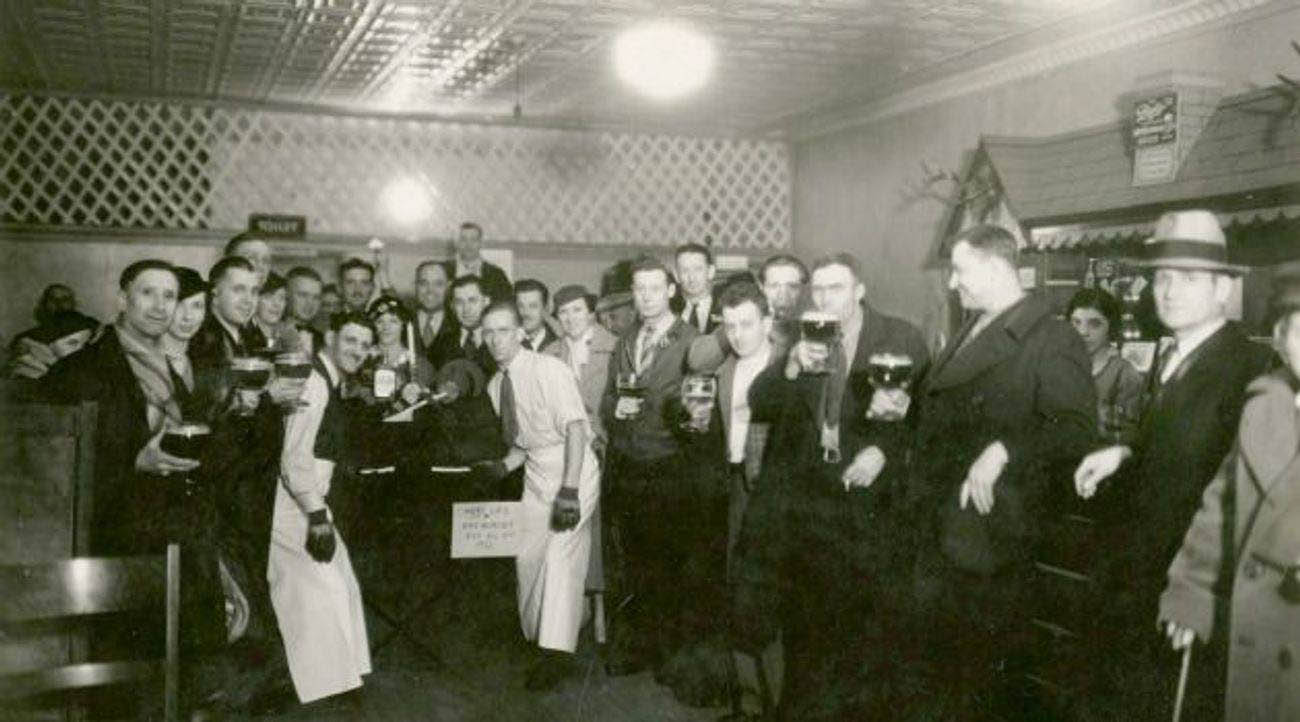 As the season opened, the Journal predicted big things, calling the Brewers "certain contenders" and adding that the team, "possess(ed) the best balanced club and one that has been immeasurably strengthened in the final week of training by the addition of Chet Laabs and Chick Morgan, outfielders, and Rudye (Chief) York, first baseman, the Milwaukee Brewers look as a serious pennant threat."

Mayor Daniel Hoan threw out the first pitch that day and Gov. Robert LaFollette was in attendance.

The Brewers won the game, 7-4, with starter Luke Hamlin giving up four earned runs on four hits in four innings and reliever Joe Heving allowing only seven hits and no runs in his five innings.

When the Colonels attempted a double steal, the Brewers turned it into a double play, preventing a Colonels run from scoring.There was a still photograph of the play at the plate in the Journal and, amazingly, the Chudnow has film footage of it, too.

After a rainout on Saturday – the same day the Derby was run in Louisville and won by Bold Venture – the two teams faced off in a doubleheader on Sunday and Leeb filmed part of that, too.

It turned out the Journal was right about 1936.

Not only did the Brewers finish 90-64, five games ahead of St. Paul, which took second place, the team went on to win Milwaukee’s first pennant since 1914.

Read more about that team here.

According to Chudnow’s Joel Willems, museum staff is working with Tenpenny to identify more of the players and game action in the film.

Ultimately, a DVD with the footage and with background information on the team and the Leeb family will be produced and made available for sale in the museum gift shop.

"Film (like this) is so rare," says Tenpenny, "it is always a joy to see some of that."

You can learn more about the footage and the exhibition at the annual Chudnow Museum of Yesteryear Founder’s Day celebration, which takes place online this year on Aug. 16.

The event recognizes the Avrum M. Chudnow, whose collections and financial contributions are the foundation of the museum that bears his name.

The event will feature a presentation by baseball author and professor Patrick Steele, who will talk about Milwaukee’s baseball teams past and present, as well as a presentation by Society for American Baseball Research member and Miller Park tour guide Mary Shea, who will speak about women in baseball with a focus on the 1944 Milwaukee Chicks.

The event is free but especially during these difficult times, the Chudnow Museum could use your support and encourages you to make a donation.