Remembering the Clifton Tap, one of the city's first known gay bars

Behold the Clifton Tap, one of the city's earliest-known "gay bars" and the resident tavern of the ancient Clifton House Hotel. The Clifton Tap, 336 W. Juneau Ave., shared a block with what would later become the Sydney Hih Building. Let's learn more about it.

By Michail Takach Special to OnMilwaukee Published Jun 24, 2016 at 4:56 PM
Milwaukee is a city with a rich and celebrated history – but there's more to our city's history than you learned in school. In honor of National LGBT Pride Month, we're kicking off a weekly series on the hidden LGBT history of Milwaukee.

Behold the Clifton Tap, one of the city’s earliest known "gay bars" and the resident tavern of the ancient Clifton House Hotel. The Clifton Tap, 336 W. Juneau Ave., shared a block with what would later become the Sydney Hih Building.

Located at 4th and Juneau for 115 years, the Clifton House was one of the city’s first "fine hotels," operated by pioneering two-time widow Mrs. Augusta Koenig Schilling for more than half of its existence.

Built for the carriage trade, the 51-by-96 foot Clifton hugged buildings on all sides without any alleyway access. Most guests were merchants and shoppers making their way to Milwaukee’s German Market, a massive Teutonic-themed trading hall at Juneau and Market Streets, demolished in 1965.

During a 1933 interview, Mrs. Schilling reflected on her childhood arrival in Milwaukee, on the same day the 24th Regiment was departing to join the Iron Brigade in the U.S. Civil War. In a 1940 interview, she blamed the automobile for ruining her business – long before freeways and urban flight. She was still listed as the hotel operator at age 85. What a woman!

Following Mrs. Schilling’s death in 1945, the Clifton House Hotel closed for extensive remodeling. Once one of Milwaukee’s foremost destinations, the building was considered just one more "ugly old coal-stained shack" in a city that was focused on the future. As we know from Milwaukee’s history, it was in these "ugly old coal-stained shacks" that LGBTQ nightlife was born.

The Clifton House became a 29-room rooming house with street-level retail, operated by Ms. Minnie Horne. One of these spaces was occupied by the tiny Clifton Tap, operated by William Mansfield, reported by the Sentinel as a "lifelong bachelor and rooming house native." The tavern consisted of two rooms, a front room with an 18-by-18 foot hand-carved oak bar and a back room "lounge" with two rear exits into the hotel lobby. According to the fleeting memories of former patrons, the lounge had pocket doors that created privacy (and safety) from the rest of the bar. Discrete parties were often booked in this windowless space – for a price.

Very, very little is known about this establishment. In a time before national "Gay Guides," Milwaukee’s few gay bars were known only by word-of-mouth. The Clifton Tap did not advertise itself. It was just one of dozens of businesses along a very busy and vibrant West Juneau Avenue, which at the time had dense city blocks stretching from Third Street to the Pabst Brewery.

Not a single trace of these city blocks remains today, so it’s hard to imagine how a historic gay meeting place could ever have existed in plain sight on 4th and Juneau throughout the 1940s and 1950s. Of special note: The Clifton Tap did not barricade or board up its windows. The bar had two rounded glass bay windows, in the vintage Woolworth’s style, which were wide open to passersby. This, again, is incredible when you consider the risks and costs of being openly gay in postwar America.

The Clifton Hotel was badly burned in a "fire of undetermined origin" on January 15, 1957. Despite the tavern owner and rooming house manager checking the furnace twice in the three hours prior, a three alarm fire broke out at 6 a.m. that caused $273,000 of damage (adjusted 2016 dollars). The fire began directly below the Clifton Tap and burnt its way upwards into the bar through the basement ceiling. The evacuated occupants were almost entirely single workingmen aged 30 to 50. Another fire, caused by a drunken resident in 1961, rendered the third floor uninhabitable and, according to building inspector reports, hazardous to human health. 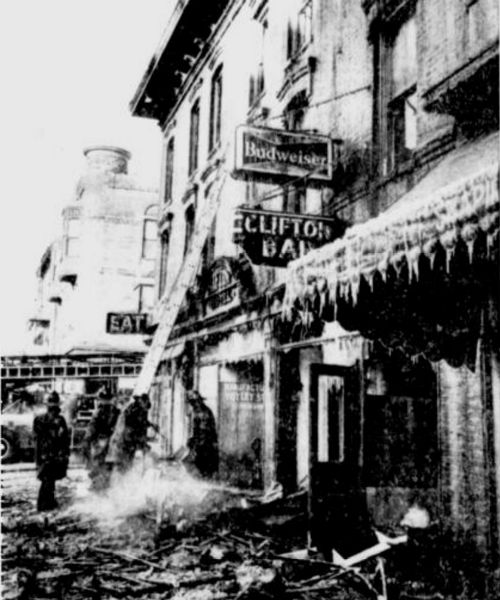 The Clifton Hotel fell under the ownership of Marshall Palakow, executor of his mother Rose Palakow's estate. Palakow owned numerous Downtown properties – including Tony's Riviera on Plankinton and St. Paul – that were conveniently in the path of the approaching freeways, and he deferred maintenance on all of them, awaiting a Milwaukee County Expressway Commission buyout. In the meantime, the Clifton House was cited by the City of Milwaukee numerous times for code violations, including a leaking roof, inoperable toilets, missing fire escapes, crumbling plaster, basement rubbish and, worst of all, rat infestation. By 1964, the rooming house was operating without a valid license, as the city would no longer grant one. Miss Minnie Horne, who had rented the tavern and rooming house spaces for $550/month, saw her rent reduced to $200 to bribe her into staying in business illegally.

On October 15, 1965, an appraiser noted that "although there is no recorded police activity at this site, there is hard evidence of deviate behavior." Operating under the guise of freeway right-of-way acquisition, the Milwaukee County Expressway Commission often exercised its powers to eliminate undesirable properties anywhere near emerging freeways. Rooming houses, once a necessity in a growing industrial city, were specifically targeted for elimination.

"The mercantile structures along Juneau Avenue cannot be rehabilitated," reads the appraiser's report. "The underlying land would carry higher value if it were vacant and available."

The Clifton House was razed soon afterwards, despite being outside the path of the freeway. Over 50 years later, the land remains vacant.

The Western Bank/Sydney Hih building, on the other end of the block, survived Westown’s architectural slaughter to house gay institutions (including The Mineshaft, Goldenshaft, The Unicorn and The Eagle) but fell to a similarly senseless demolition in 2012.

On Saturday, June 18, ground was broken for the new Milwaukee Bucks Arena. Curiously, the former footprint of the Clifton Hotel is now outlined in fencing at the northeast corner of 4th and Juneau.

Anyone with further information about the Clifton Tap is encouraged to share with the Wisconsin LGBT History Project or email info@milwaukeepride.org.