Settle in and relax at the homey Cloud Red patio, but bring your own food

When Rebecca Goldberger and Lis Duggan opened Cloud Red at 4488 N. Oakland Ave., in Shorewood, in 2016, Goldberger said, "What we're most passionate about is making Cloud Red feel like an extension of people's homes; somewhere customers can simply be with friends and family." The bar and restaurant's new patio is the perfect embodiment of this passion.

When Rebecca Goldberger and Lis Duggan opened Cloud Red in the former Village Pub at 4488 N. Oakland Ave., in Shorewood, in 2016, Goldberger told OnMilwaukee, "What we’re most passionate about is making Cloud Red feel like an extension of people’s homes; somewhere customers can simply be with friends and family."

The bar and restaurant’s new patio is the perfect embodiment of this passion. 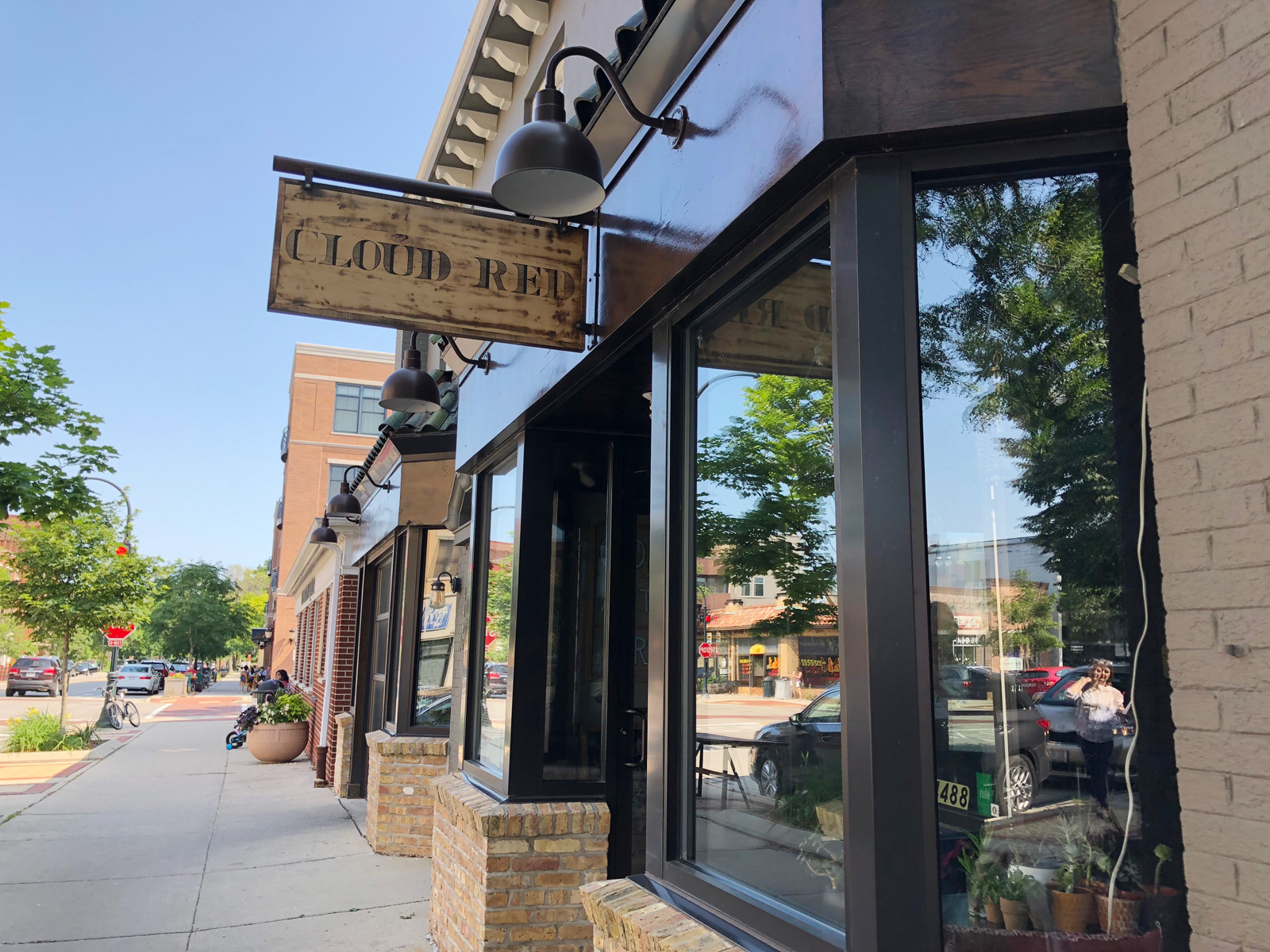 A few high-top tables are interspersed with wooden benches softened by blankets and pillows. Two firepits add heat and ambience. A long wall topped by a privacy fence is lined with plants and flowers.

Opened last summer, the patio, accessed through the back door of the bar, or directly from the parking lot, is not tiny, it’s not big, either. It is the perfect size to feel cozy and intimate. This year, the owners added a transparent canopy to make it welcoming even when it’s raining. 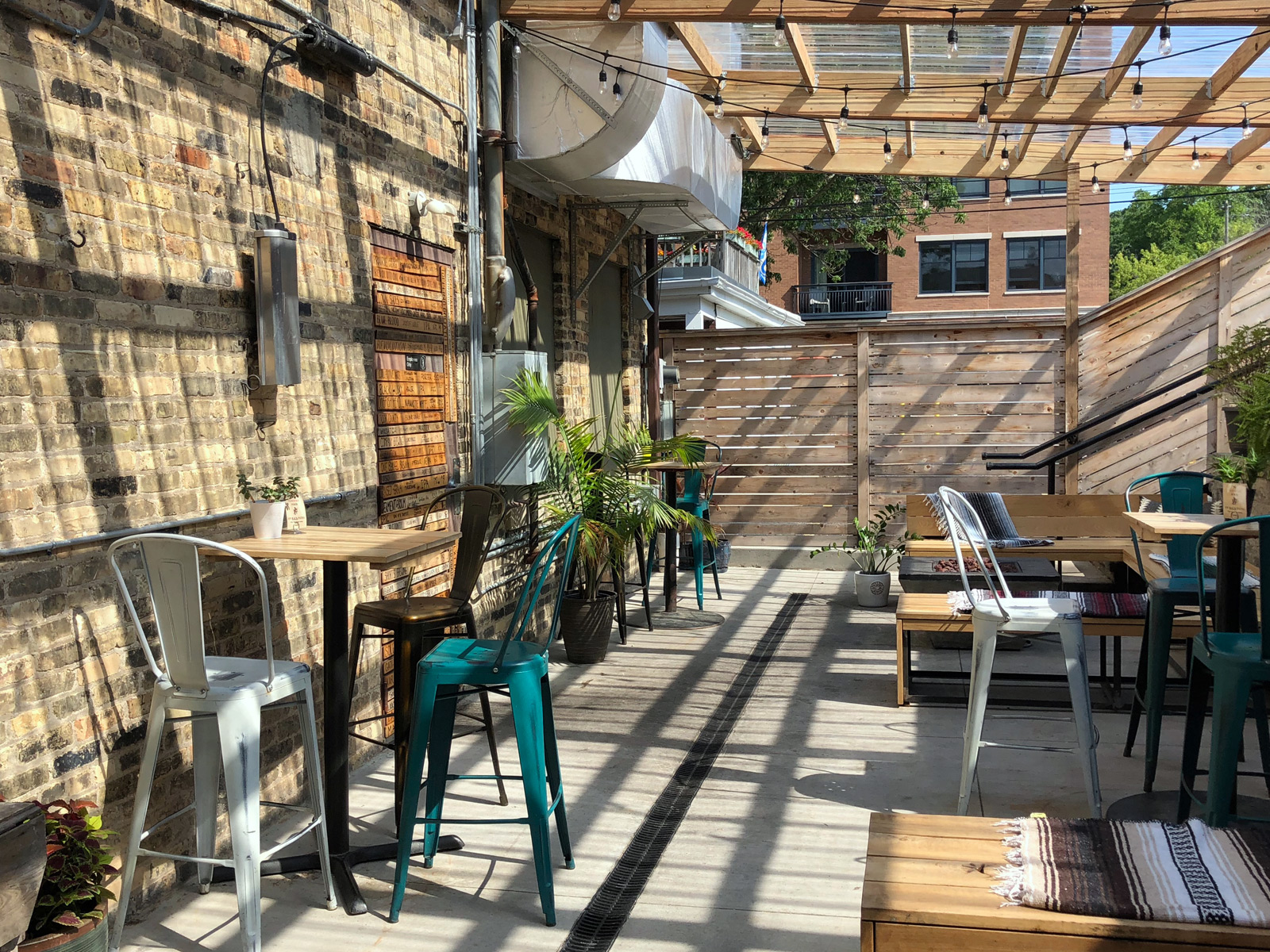 "We couldn't hardly ever use it," says Goldberger, "so we looked into getting canopy covers, but we wanted the sun. Lis’ husband does construction management and then they have friends in construction and architecture and so they just crafted it around it. So it's completely rainproof, snow proof, so we can now use it all the time."

A recent torrential downpour was proof that the top is watertight, says Goldberger.

"t was totally dry. Some people were sitting out here by the fire and it was just pouring, I mean it was loud."

With the top and the firepits, it’d seem that this patio is outfitted for 12-months-a-year use.

"We're going to see," she says. "Last year we were surprised that people didn't sit out here in fall, because it's kind of nice to sit out here with a hot cider and a fire. I think a lot of people didn't know. We were still kind of like feeling it all out, so we didn't exactly advertise it either. People definitely know this year." 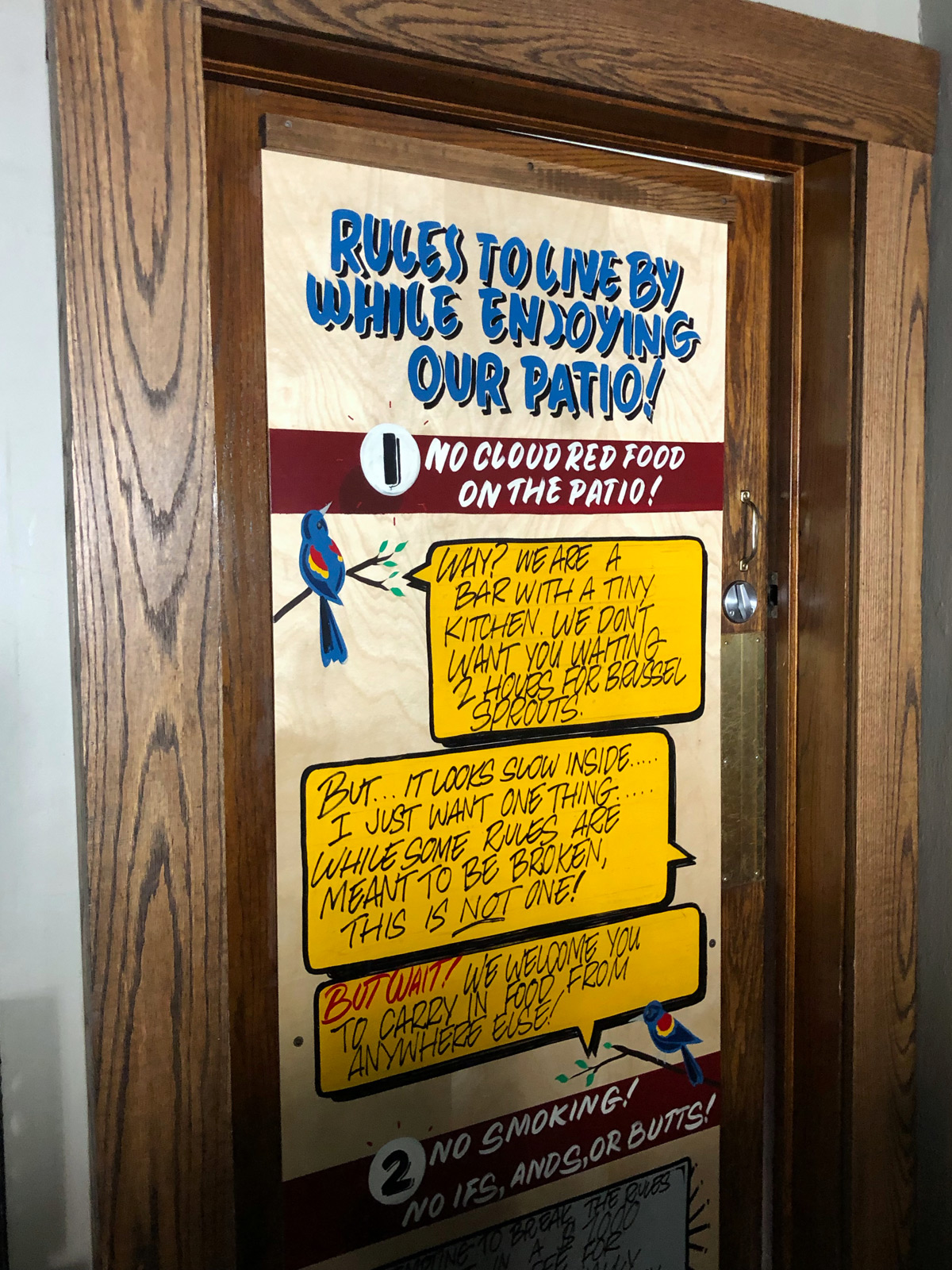 The main challenge for the patio is Cloud Red’s unusual rule. There are two rules, but only one is atypical: while you may eat on the patio, you may not eat food from Cloud Red on the patio. (The other rule – both are posted clearly on the door that leads outside – is no smoking.)

It seems counter-intuitive that a business that serves food – like Cloud Red – allows you to carry in food from the numerous restaurants in the neighborhood (or even from home), but you can’t order off the menu when you’re on the patio or headed out there.

"Well, that's because we're not at a restaurant," says Goldberger. "We're a social house. And this is just an extension of our social house that there's just a little bit different rules. So like bring Culver's, order pizza, go get sushi across the street, come on back and enjoy the space. 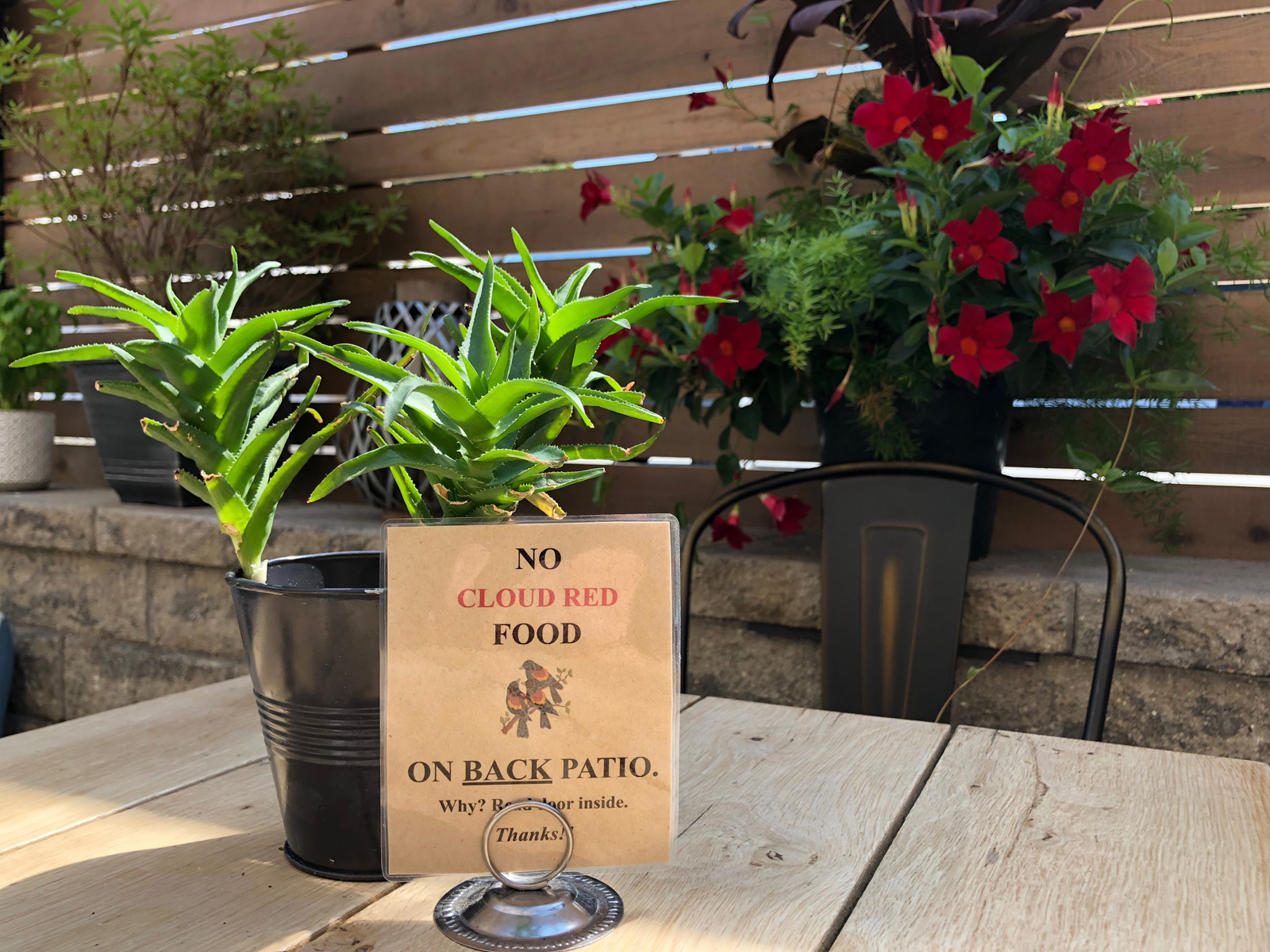 "This was meant to be more like a beer garden. So if you go to Estabrook (Beer Garden), you don't always get their pretzels and their food ... you bring your own picnic. But people just have a really hard time understanding that just because they see us as a restaurant."

From a practical standpoint, the issue is that the kitchen at Cloud Red is small because the place was never meant to be a restaurant with a full-service kitchen.

"I think just people, once they get it, they understand. Alll of our regulars totally respect it and understand. Some people are still struggling with, "I don't understand. Why can't I? What's the point? But I want brussel sprouts.

"We get so busy and it is a tiny kitchen and all our food is homemade and we don't want you waiting an hour and a half for brussel sprouts. And it has to be black and white."

Number 2: settle in and relax.

The beer list at Cloud Red is amazing. It’s wide and its deep and, on the patio, its listed on cool slats of wood nailed to the doors. You’ll want to try more than a few (drink responsibly, folks). 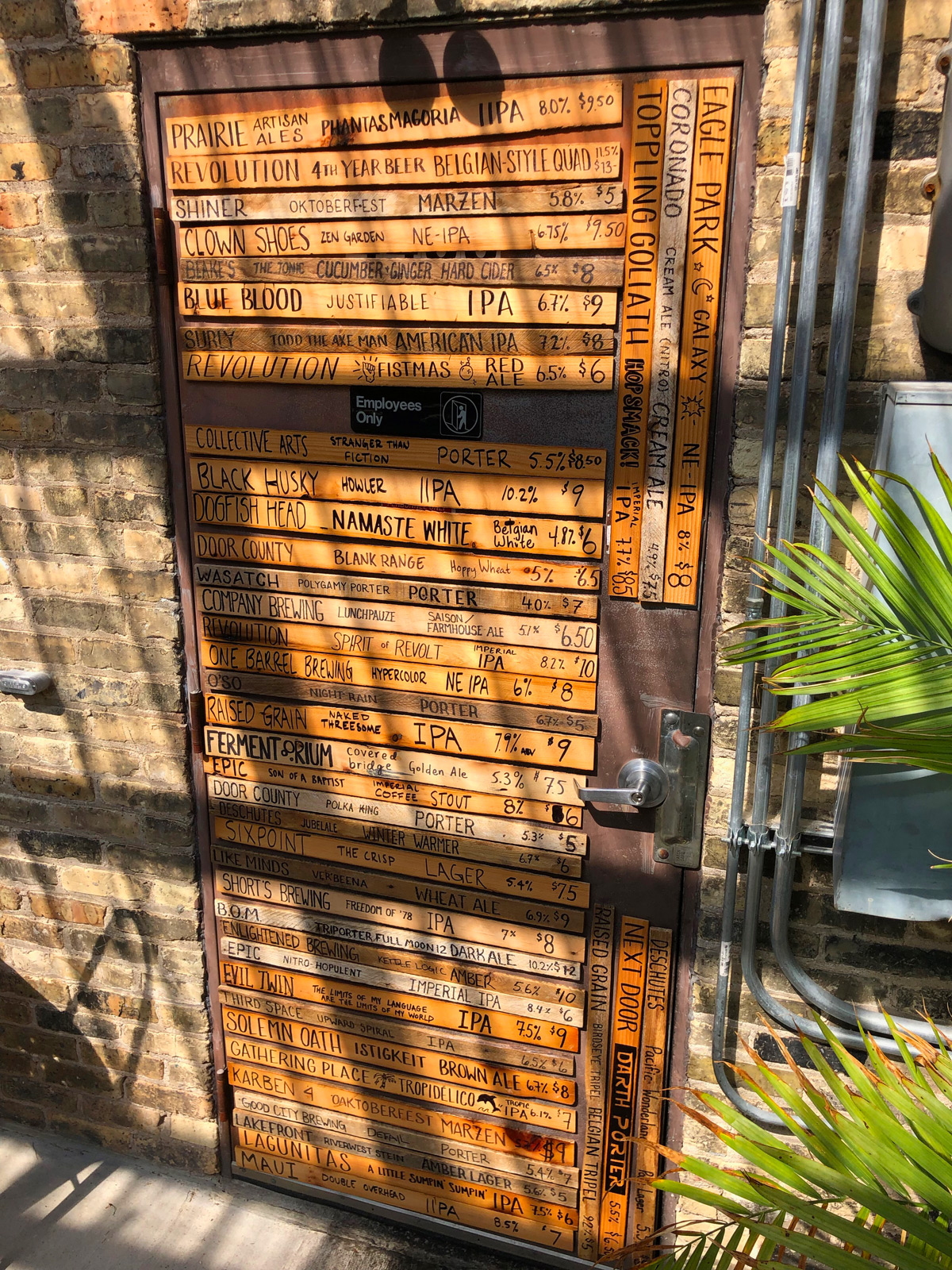 And there’s no better place to sip a cold one, chat with your friends and, thanks to the bench seating around the fire pits, make some new ones.

"We always wanted to be a social house and it's an extension of your backyard, except you don't have to make the drinks, or clean up," says Goldberger. "Originally we just had built this one bench and then we had more tables over there just to see what people gathered more toward. Did they want their own separate space or will they share kind of this community space?

"But people are sharing space and it's pretty cool, because it goes to our name. A group of red winged blackbirds that fly together is called a cloud. And so the people are just kind of gathering here and it's like a little cloud of people back here."