Tom Terris and the world's most unique nite club

This morning, the lovely people at The Vanguard asked about Club Terris, and sent a few images from old matchbooks that showed the nightclub's rather unique layout, with a wrestling ring surrounded by a bar. Here's what I was able to whip up in about half an hour.

This morning, the lovely people at The Vanguard asked about Club Terris, and sent a few images from old matchbooks that showed the nightclub’s rather unique layout, with a wrestling ring surrounded by a bar.

I love to be asked about old Milwaukee places – or not so old ones, for that matter – that I haven’t heard about before because it makes me dig. In a quick dive into the books, I uncovered a few nuggets.

Club Terris was located in a two-story building at 521-31 W. Wells St. with a cream-colored terra cotta facade, according to OldMilwaukee.net, a great local resource. 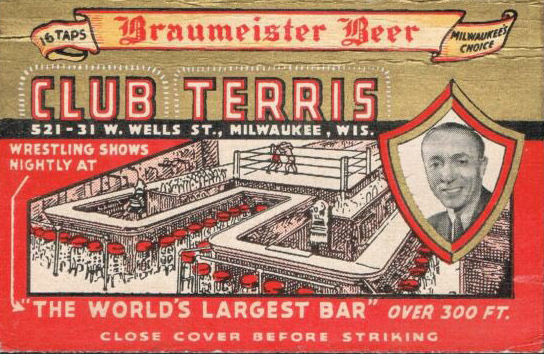 "The Terris Club was a burlesque club which operated for more than 30 years and was owned by businessman and boxing promoter, Tom Terris," the site notes. "The club gained fame in 1958 when it switched over from live musicians to recorded music to save on the higher costs of the union musicians."

The building itself – shared with Spheeris Brothers sporting goods store – burned in March 1960 and was razed in 1964.

The Terris Club was notable enough to get some references in Billboard magazine.

In a September 1946 review, the national music and entertainment magazine noted that the place had recently been remodeled. There was no cover charge – a fact also noted on the matchbooks – and there were floorshows at 10 and 11:30 p.m. and at 1 a.m.

"Club Terris has a floorshow that is packing people in, and Saturdays and Sundays see a line outside. Club emcee Jimmy Method, and stripper Winsome Wynette are the draw," Billboard wrote. "Method’s nonchalant and often-insulting banter with the customers is greeted with shouts of laughter. ... Winsome Wynette, a looker, comes out in bra and g-string and quivers and shakes her hips. Accompanying low blues music by ork (sic, orchestra) adds to sensuous act. Gets a big hand." 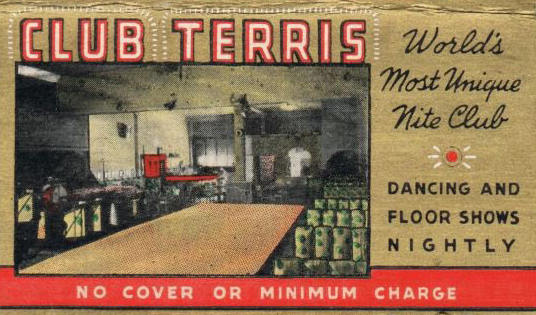 A few other performers earned a mention, too...

"Marty Off, who has an excellent tenor voice, handles classical arias as well as pop songs. Could do as well in other fields of singing, such as concert stage and radio, where his voice would reach a more appreciative audience.

"Jeanne Karyn, pretty young tap and toe dancer, should go far in niteries. Her terping versatility gets a big response and brings her back for several encores.

"Mona Henderson is familiar to most Milwaukee night club goers, having been featured in most of the larger places in town. Her can-can routine goes over big."

Another regular at Club Ferris was Nancy Hart. In 1947, Billboard noted that the "star at Club Terris was badly shaken up in (a) recent traffic accident."

The bar must’ve been something to see. It also offered nightly wrestling shows and claimed that it had the world’s largest bar at more than 300 feet.

In 1953, Tom Terris also took over the popular Lakota’s nightclub and restaurant, according to Billboard.

"Plans call for conversion of Lakota’s to a Class A room, with considerable remodeling and reported bookings of top-grade acts. Terris will continue to run his Club Terris, leading Wells Street strip citadel, along with his new bistro."

Terris ran for alderman in 1940. I’m not sure if he won, but he did find a giant snapping turtle once.

Yes, in 1974, a newspaper photograph showed Terris holding a giant turtle, and the caption read:

"It’s a big one – A snapping turtle, measuring four feet from head to tail was held by Tom Terris at the River Boat Lounge, 2178 N. Riverboat Rd. The huge turtle was found on the bank of the Milwaukee River near Terris’ restaurant. The area is at the east end of Commerce Street."

In 1971, Terris earned a congratulatory citation from the state legislature for his Riverboat Restaurant.

"Whereas, Tom Terris of Milwaukee long dreamed of restoring beauty to a segment of the Milwaukee River to make it a scenic showplace, and now he has made that dream come true by buying up an old riverside junkyard and transformed the site into a Midwest showcase for people to come by land and water to enjoy the decor and wonderous (sic) view of the river and its beautified surroundings; now, therefore, The Members of the Wisconsin Legislature, on the motion of Senators Whittow and Parys and Representative Bultman, under Joint Rule 26, extend to Tom Terris since congratulations on the festive opening of his unique Riverboat Restaurant and Lounge and wish him and The Riverboat Ltd. every success and many happy years on the banks of the Milwaukee River where Mr. Terris made his dream come true. Read and adopted."

I guess Terris was in the entertainment business until the end. He died in 1979 at age 84.