Some of life's best memories are created while sharing meals with family and friends. And that idea forms the basis for the new Cyril&Alice brunch pop-up, which will take place on Monday, Jan. 29 from 10 a.m. to 2 p.m. at Amilinda, 315 E. Wisconsin Ave.

Some of life’s best memories are created while sharing meals with family and friends.

Schuenke says there will be an eggs benedict built on a parsnip latke with smoked leek confit and lemony garlic sauce; a fried mortadella sandwich that riffs on the traditional muffaletta, and German schnecken, a cinnamon roll made with a sweet potato-based dough. Pricing will be $8-15, and attendees will also have the opportunity to indulge in a variety of classic brunch cocktails.

Schuenke, whose career has included work in Washington D.C (Cork Wine Bar), New Orleans (La Petite Grocery) and Milwaukee (Odd Duck, Hello Falafel and currently GoodKind) and was the chef de cuisine at Hello Falafel. Her new solo venture is named for her great-grandfather Cyril, and his sister Alice.

The power of family 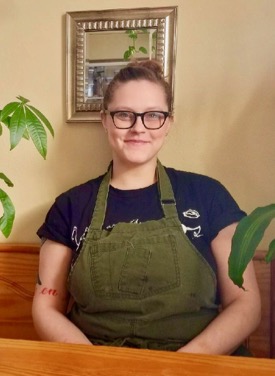 "My great-grandfather was just this epic renaissance man," Schuenke says. "He painted and refurbished carousel horses. He played the concertina. He lived on a farm and he had a giant barn that was filled with all these things that he’d collected. As a child, I’d play in the barn. There was an entire room that was filled with all this old-school classroom furniture and supplies. It was a goldmine for a child with an imagination."

As a girl, Schuenke says she also took inspiration from Alice, a woman whose legacy she experienced through her great-grandfather.

"His sister Alice was a spitfire of a lady who defied the norms for women of the time," she says. "She passed away in a tragic accident at a very young age, so I never knew her, but my great-grandfather always told me I reminded him of her."

Cyril passed away about six years ago at the age of 103, but Schuenke says the influence he wielded was indelible.

"They’re two people in my life who embodied the joy of life, and they’ve really always been part of this ideal I’ve had," she says. "I get my joy from cooking, and in thinking about names, it was a nice way to pay homage to the influence they’ve had in my life."

Schuenke says the pop-up will be first of a variety she plans to host in the coming months.

"At this point in my career, I feel like I’m really coming into my own," she says. "After leaving Hello Falafel and moving on to work at Goodkind, I’ve really decided to push myself professionally and put myself out there."

Ultimately, Schuenke says she loves the idea of starting her own restaurant, so the pop-ups are a way for her to dip her toes into the water as she plans for her future. Schuenke says that, moving forward, she anticipates one of her next pop-up events will feature a collaborative dinner showcasing dishes from female chefs from across the city.

A limited number of seats are still available for the Cyril&Alice pop-up. Reservations can be made online at OpenTable.com.

Lori Fredrich May 19 Dining
Do This