Dancing Goat turned heads when it bought the assets of the bankrupt Death's Door Spirits. Now, it's eyeing massive growth at its Cambridge, Wisconsin home.

When news broke a little over a year ago that the bankrupt Death’s Door Spirits had a buyer and that it was Dancing Goat Distillery in Cambridge, southeast of Madison, some heads turned.

How could this relatively young distillery gulp down Wisconsin’s biggest distillery?

Spend a few minutes, however, with Dancing Goat’s Nick Brady Maas and Mike Reiber and you’ll know that these guys think big and have the get up and go to get it done. 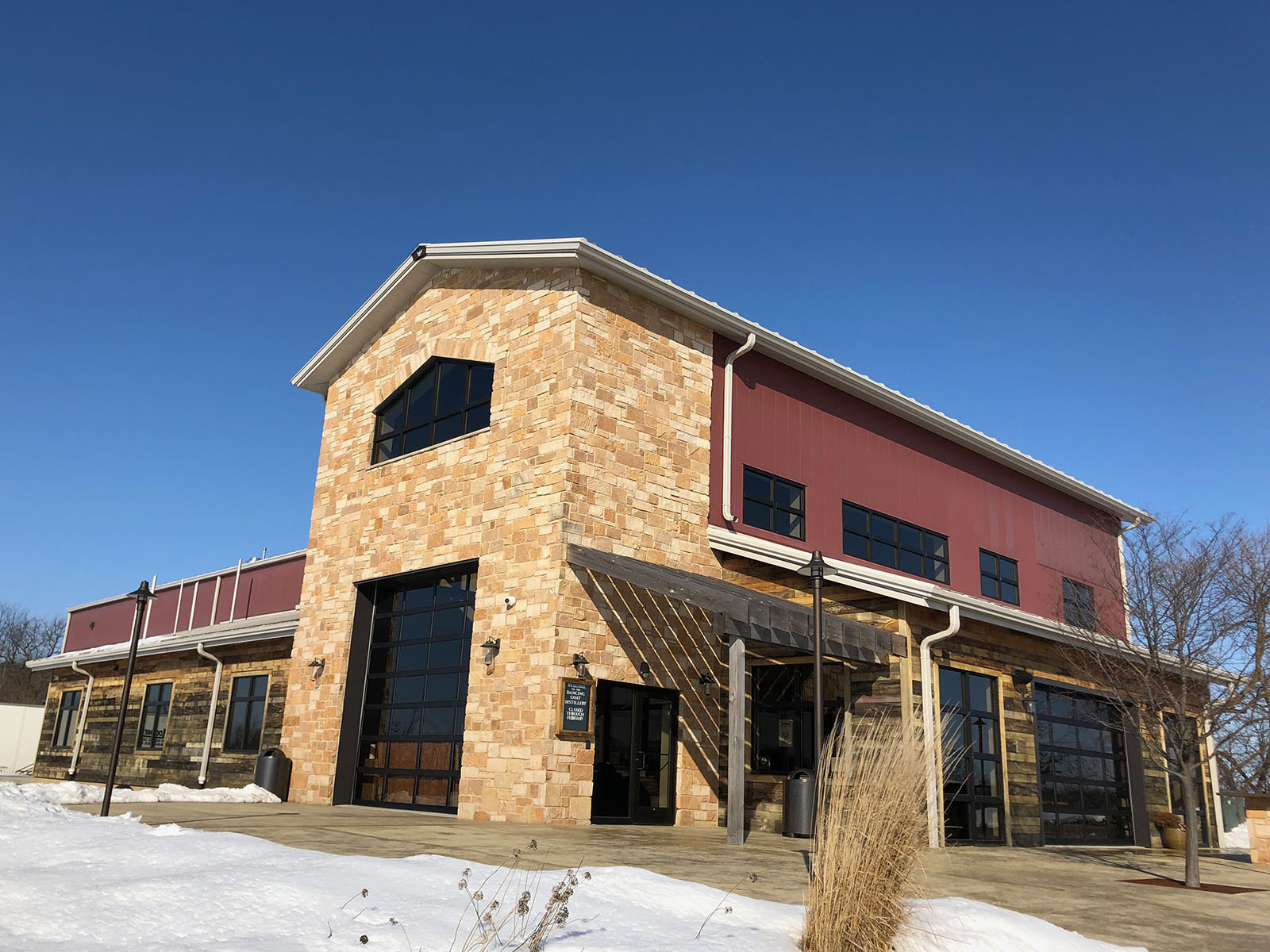 When I visited when the distillery, it was closed to the public for renovations. As we walked through, Reiber and Maas described for me some of the upcoming changes on tap; changes that will boost the distillery’s output a whopping 10-fold.

Aren't they worried there won’t be enough demand for that kind of supply?

"No, it's all got to go into a barrel," says Maas, with a grin. "There's five years left before it hits the market anyway."

Don’t mistake Maas’ confidence, humor and optimism for hubris or ignorance, though.

If listening the head distiller talk shop about distilling science and techniques doesn’t convince you, then consider that one of his partners is his father Tom, the CEO of Agave Loco and the creator of RumChata. His late grandfather Duane Maas spent a half-century in the spirits business.

Dancing Goat might seem young, but it’s wise beyond its years. 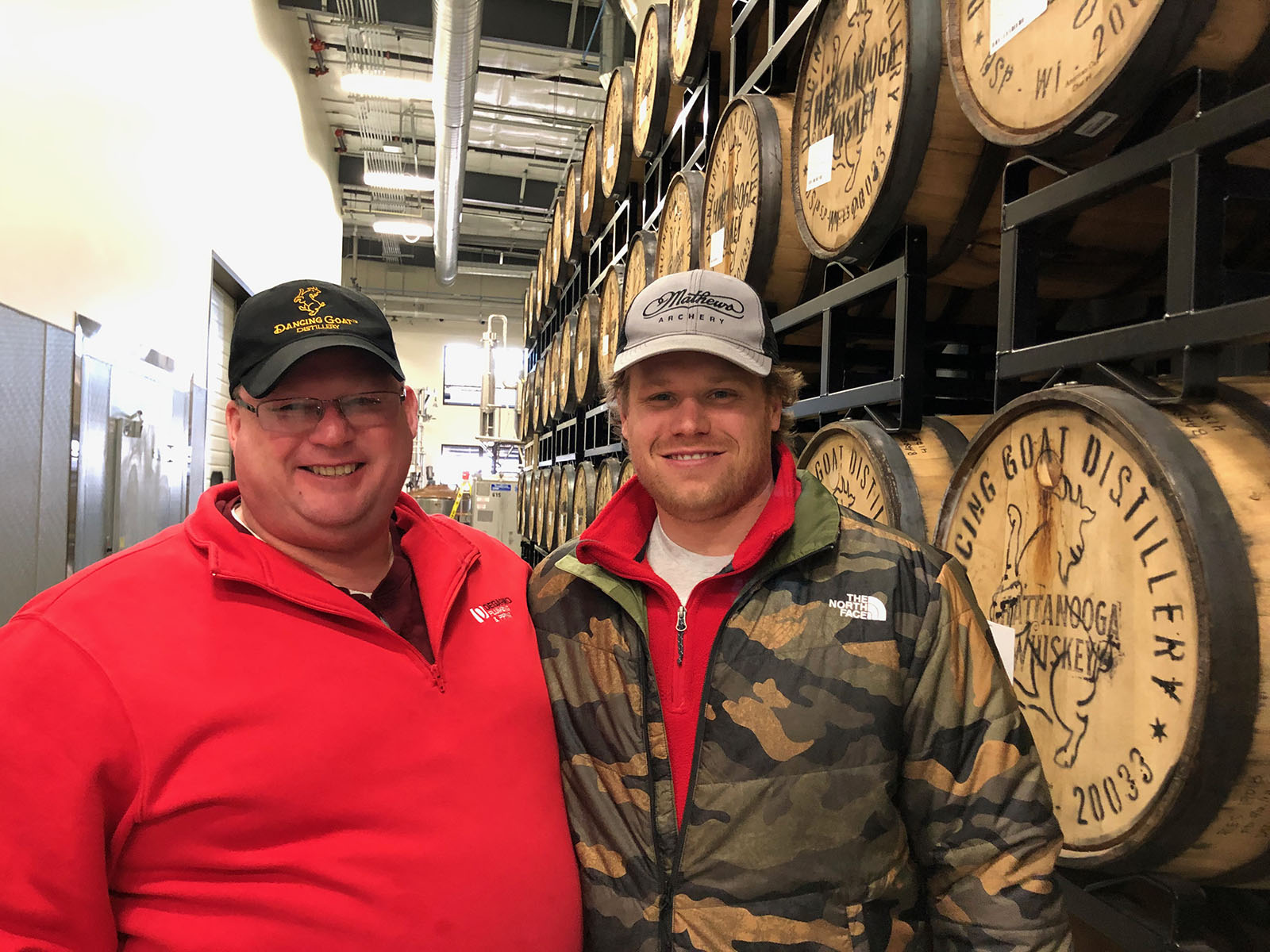 Interestingly, to get to Dancing Goat, you have to follow a new road that snakes through vineyards planted in recent years as part of a development called – wait for it – The Vineyards at Cambridge, which is also home to residences and the Cambridge Winery.

When you arrive, the distillery building is a striking one that looks almost like an upscale modern barn. Outside, it feels like a nice bridge between tradition and innovation. 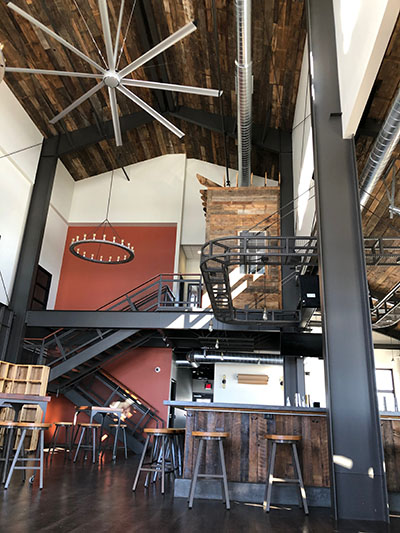 Inside, there’s a soaring open space, with a small bottle shop on the left, a bar on the right, some offices upstairs and the stillhouse visible through windows along the west wall.

While I was there, a pallet held used barrel staves awaiting installation along the tasting room’s south wall. There’s rustic reclaimed wood everywhere: on the bar, on the walls of the offices, even on the ceiling.

I must look impressed, because Reiber offers, "We’re really proud of it. It’s a labor of love. 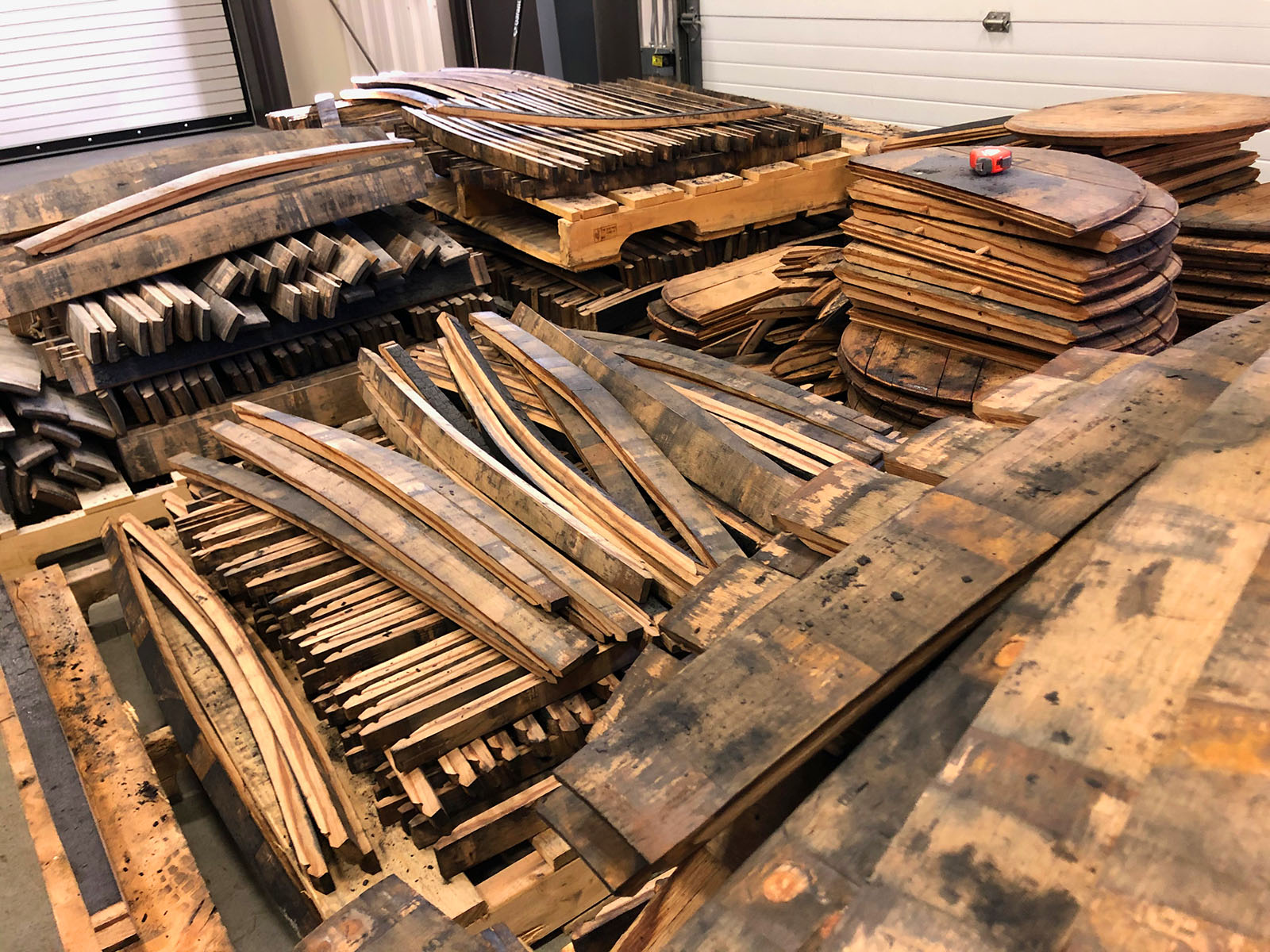 "Duane Maas, Nick's grandpa, was the operations guy and then he passed away, so there was about a four-month gap where they were evaluating what to do, how to do it. And Travis Hasse, our previous president, asked me to come over here and help with this; that was 2017. I was a contractor and then I came on full-time as the director of operations."

The construction took some time, says Reiber, in part because of the elder Maas’ passing.

They actually started the process in '14," he says. "So it took a while, but they did a nice job on the inside. It's a very warm space. It's a nice place to work." 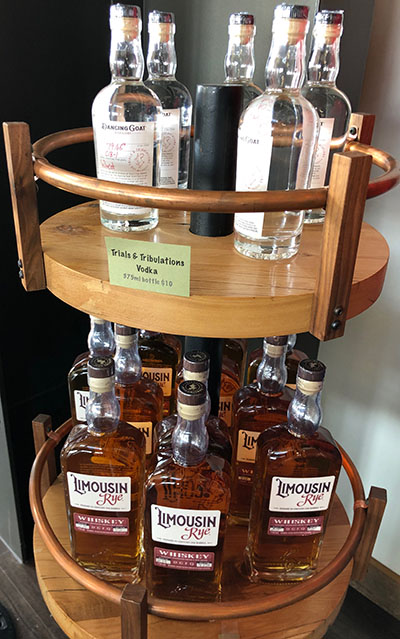 It’s also a nice place to visit, as evidenced by the fact that the tasting room is popular, especially on weekends, when some of the business makes the trip out from Madison, joining the local Cambridge folks who come.

Tasting room customers offer Dancing Goat the chance to educate about spirits and cocktails, and the laws of the State of Wisconsin, which say that distillery tasting rooms can only sell what is made on-site.

"Sometimes people get upset if they can’t get what they want," says Maas, "but it’s opportunity for us to explain. And then they get it and they come back and next time, they know and they’re happy."

The tasting room also allows the staff to explain what’s happening on the other side of the glass.

"We think a great place (has) to be transparent," says Reiber. "We have a great brand with great people, and the story comes alive when people visit out here. They're like, ‘Wow, this is not what I expected,’ or ‘I never knew this was here.’ Because a lot of times they think a craft distillery is something small and quaint and maybe somewhere down between moonshiner and hobbyist, and it's really not."

If anyone could look at the tasting room and think Dancing Goat is run by dabblers, a step inside the stillhouse would put a quick end to that idea.

There are two stills here and both are running all the time during the week, says Maas. 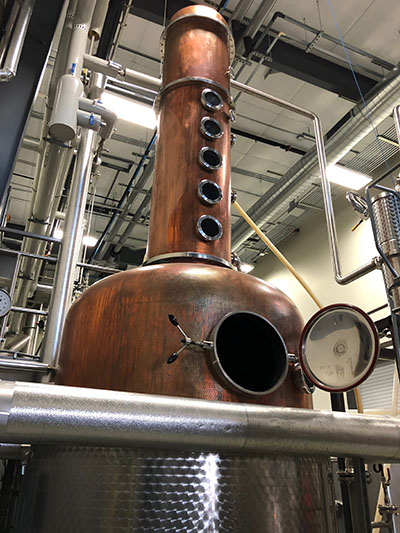 The most eye-catching is the 570-gallon German CARL pot still acquired as part of the Death’s Door purchase. There were other pieces of equipment that came over, too, but not everything was worth moving and what was, says Reiber, needed some attention.

"When we bought Death’s Door a year ago, our thought was we were just going to take that equipment and bring it over here and augment, and that was a natural fit," he says. "We brought the pot still over right away. 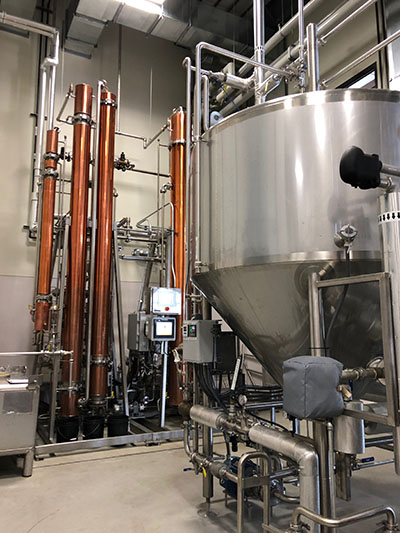 "We brought it over in April and it took us until end of June to get it in condition where it could run again. It took a lot of hard hours cleaning and doing maintenance, and we found seals and gaskets that were busted, broken, leaking, and there are no German parts sitting around on shelves anywhere, at least not of this size. So it took us a while to get parts."

And that was the good news.

"Then (among) the rest of the equipment," says Reiber, "we found fermenters that had collapsed ... the cones and the bottom pans literally had wrinkles in them, like aluminum foil. It was obviously a mistake in opening, closing valves."

Then there was the gin, already bottled and packed in cases.

"It's just not up to our specs and our standards," says Maas, and so we're dumping it all in a tote, and we're going to throw it back in the still and clean it up a little bit. Method and how you run the still affects quality in a big way, from a palatability and flavor standpoint, but also in a texture standpoint."

The gin will go back into the still where it will be kept in full reflux so that the distillate can get as much contact with the copper as possible. 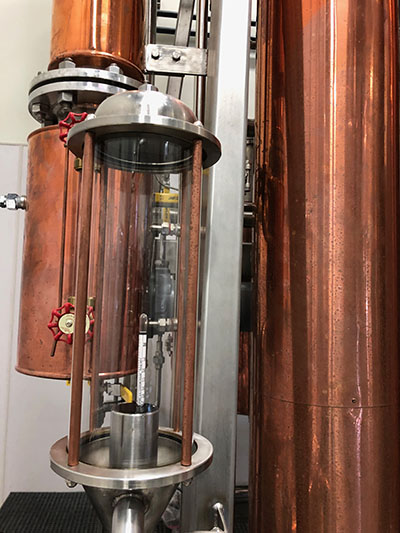 "We're just going to scrub it up, give it a little bit of better body," says Maas. "We're going to take some things out of it that we don't like flavor-wise, but then also we're going to spike it with the botanicals and just make something unique, you know?"

In the meantime, some folks in Milwaukee are opening the cases, and then the bottles, one by one and dumping the gin into totes, so it can be re-distilled.

"It's hard to do from a cost standpoint and labor," says Maas, "but it's fun and it's unique."

Dancing Goat doesn’t intend to re-bottle that gin, but will instead make it a tasting room special. 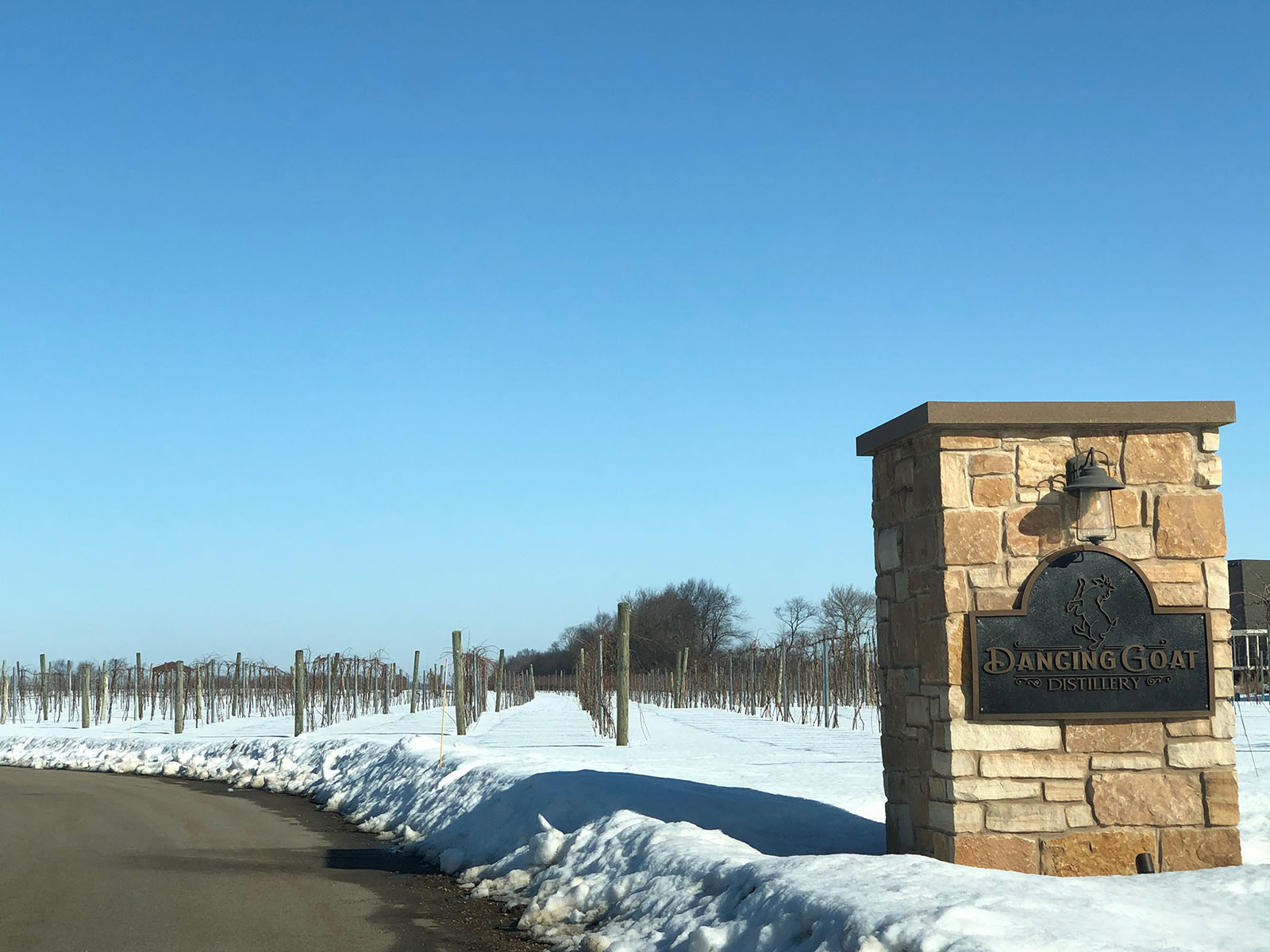 "We like to celebrate spirits, we like to celebrate experiences," he says. "And a project like that where we can take something that most people would literally just dilute and dump down the drain and say, ‘screw it’? It's an opportunity for us to really find something unique. And also it's a test, right? How good are we with mash-ups? It takes a lot of people working together, doing some really cool stuff."

So, will that cool stuff ever involve the grapes growing outside? Will there be brandy? Grappa? 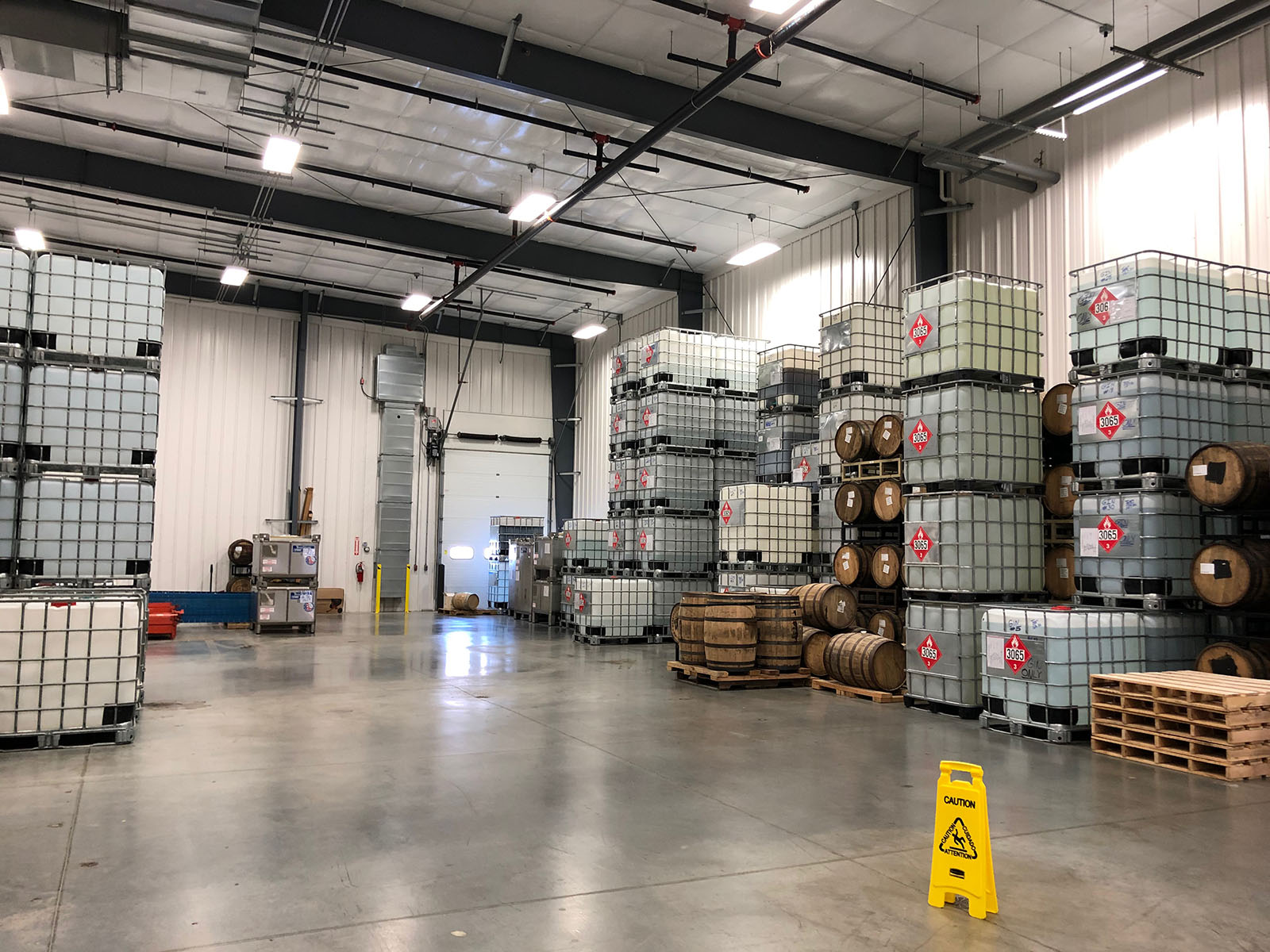 "They've brought stuff over," says Maas. "They brought over wine and we mixed it with a bunch of gin and stuff and we turned it into vodka. It's got a little bit of character to it. It has vodka in it, whiskey in it, all types of flavors."

Dancing Goat’s most well-known whiskey is its Limousin Rye that’s made with a solera system that includes three kinds of new and used oak, including from Limousin, France (hence the name).

The whiskey has earned an impressive 90 rating from Wine Enthusiast and a 93 at the Ultimate Spirits Challenge.

Though Dancing Goat hasn’t done organized tours yet, that’s about to change as more and more folks have come in seeking that experience. Until now, if you wanted a tour, someone stopped what they were doing and gave you one. That’s becoming unmanageable, says Maas. 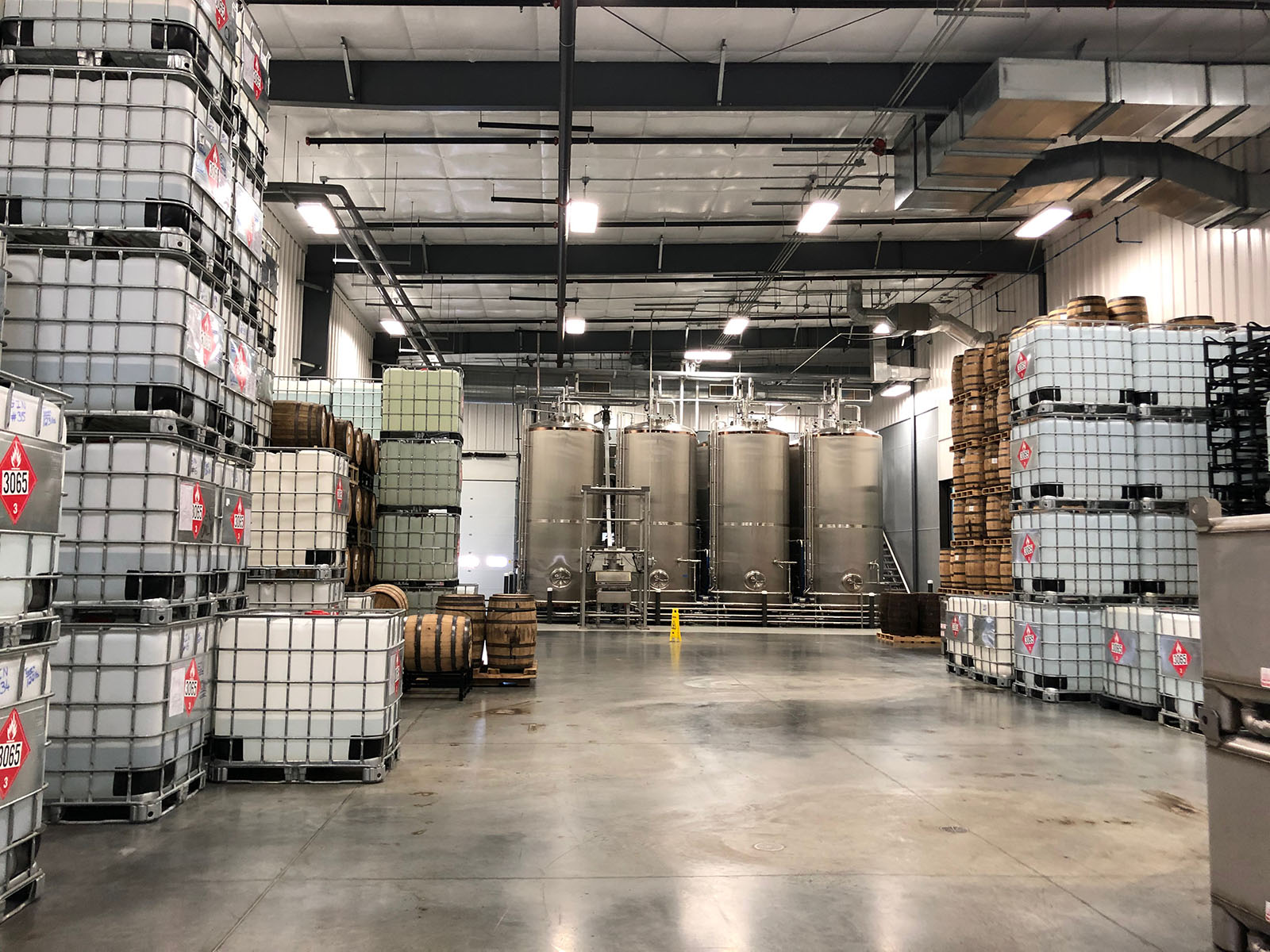 "We're moving to more structured tours because we're just getting more traffic," he says. "And then given the size of the operation and what we're building on the other side (of the wall) ... ever since we built this place, we've always just kept adding. Demand has increased and people have been receptive."

That means new and bigger stills with more capacity, more mash tuns, more fermenters, more space for barrels. Dancing Goat has been growing and it’s getting much, much bigger in the coming months. Ten times bigger in terms of capacity, as Maas told me earlier.

But, it still all comes down to the tasting room, says Maas.

"Hopefully, it's all applicable out there. We like to say the tasting room is more of a place where we show people how to paint. We just made the paint. If we can connect with people on an educational level, we know that if we are complete and transparent with what we're doing back here and then we take it out there, then people can understand.