Thanks to collector Karl Bandow, we have some stunning, and sad, vintage Ray Szopieray images of great Milwaukee buildings' dates with the wrecking ball.

Like any city, Milwaukee is always changing. Out with the old, in with the new, right?

While some might argue we're a town that especially prizes our architectural gems, others will disagree and lament the lost treasures.

No matter on which side of the debate you fall, you might still enjoy looking at the old cityscape and seeing how it changed.

Thanks to collector Karl Bandow, we have some stunning, and sad (to some of us, at least), vintage Ray Szopieray images of great Milwaukee buildings' dates with the wrecking ball. 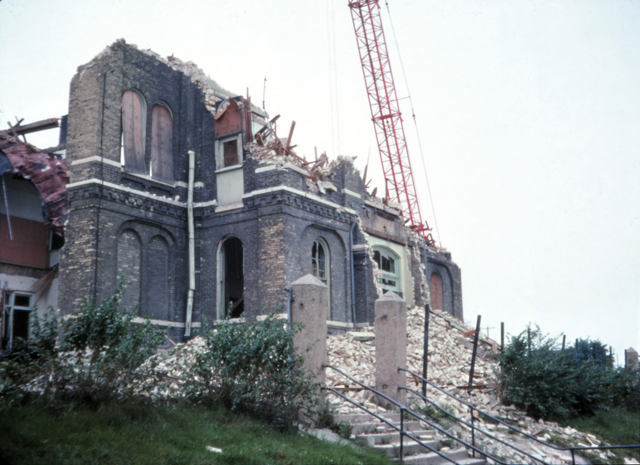 Walter Allen School was located at 1657 S. 3rd St., just north of Mitchell Street. Originally designated as Twelfth District School No. 1, in 1912 it became Hanover Street (which was then the name of South 3rd Street) and in '29 it was renamed in honor of Allen, who had been an assistant superintendent of MPS.

Built in 1873, it was similar in design to other schools, which had been designed by Henry Koch – notably 18th Street School – suggesting it too may have been his.

These images were captured during demolition in September 1975. 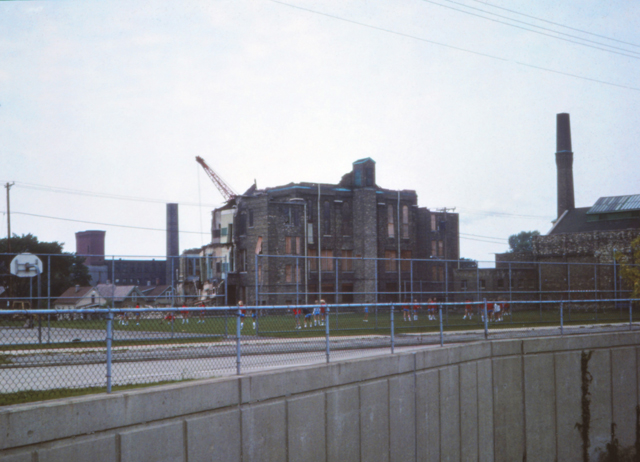 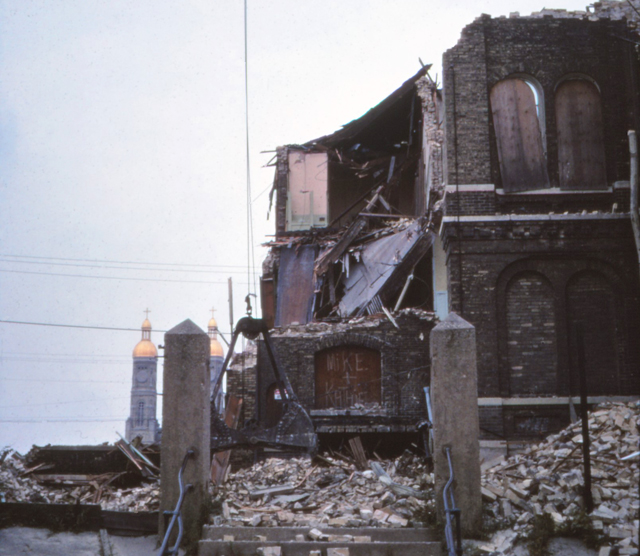 Water Street, between Clybourn and Michigan 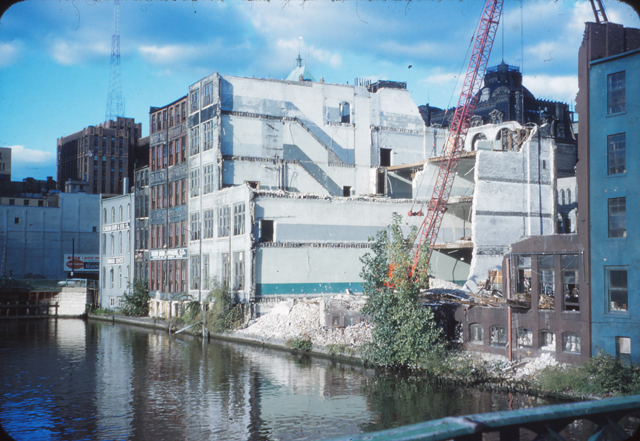 It's hard to get a sense of what's being lost from this November 1960 riverside view of the block of Water Street between Clybourn and Michigan, but we can suspect that they were better than what replaced them, which is this ... 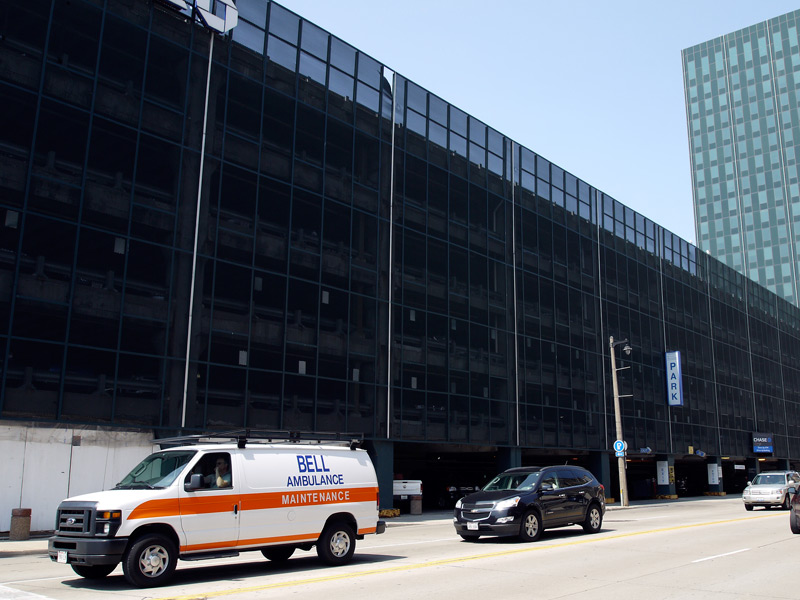 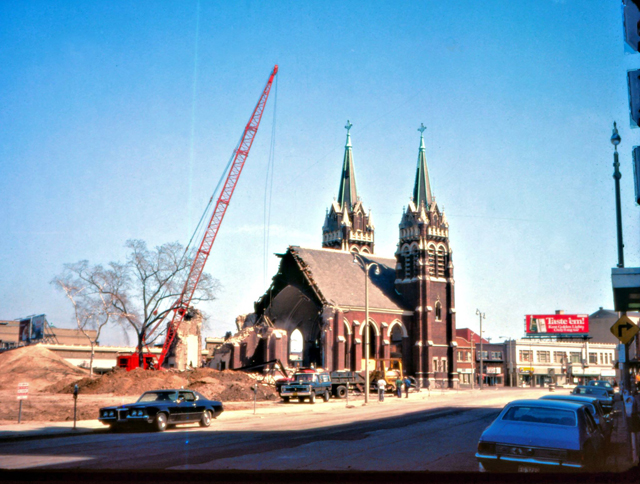 Built in 1905 and designed by Otto Uehling, St. Jacobi stood at 1321 W. Mitchell St. until it was demolished in April 1977. These photographs feel especially poignant after the landmark Trinity Evangelical Lutheran Church Downtown was wracked by fire this spring.

The congregation bought some land on 86th and Forest Home in the early 1960s and moved its school there soon after. The church – which began holding services at both sites once the school opened – moved for good just before demolition began. 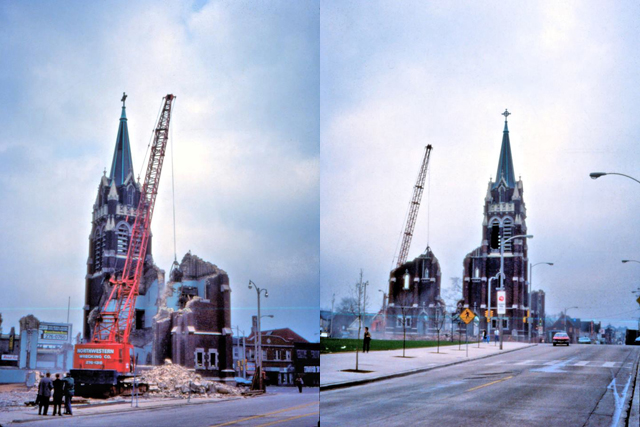 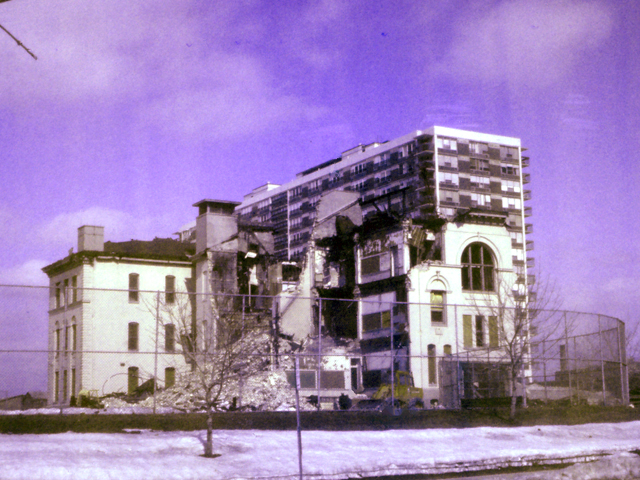 Jefferson Street School, seen here from State Street, was designed by Ferry & Clas, who also designed The Pabst Mansion and the Central Library Downtown, and built as the Seventh Ward School in 1899. It was razed after being damaged by fire in 1978. 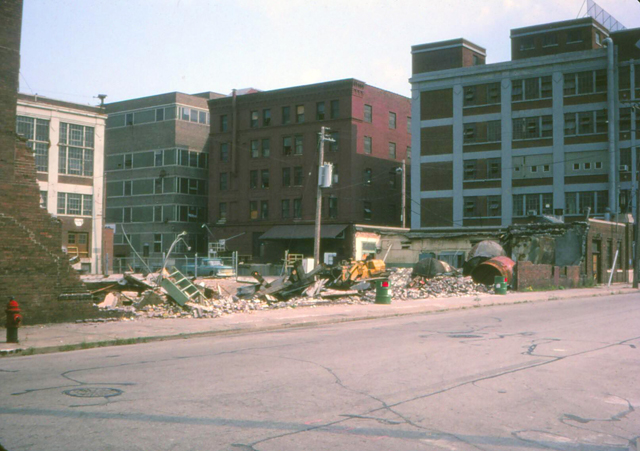 While some of the buildings in the Pittsburgh Plate Glass complex in Walker's Point survive today, this one – on Oregon Street, just east of South 1st Street, did not.

These are interesting because PPG was Szopieray's employer and one wonders how he felt seeing what must have been a familiar place disappear in August 1979. 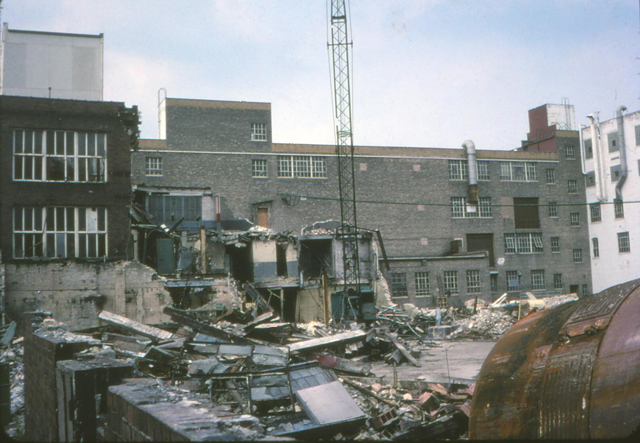 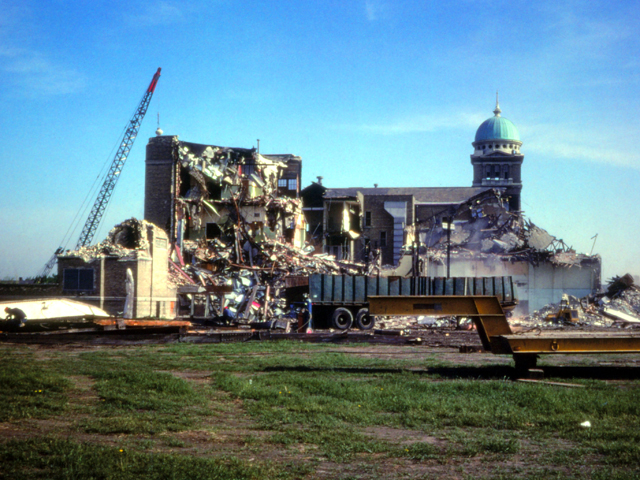 South Division High, on Lapham Boulevard, was beloved for its distinctive dome topped with a spire. It was designed by Milwaukee architect Henry Koch, who also drew City Hall, The Pfister Hotel, Turner Hall and many other familiar buildings.

The building had many additions over the years, but still was replaced in 1977 and razed soon after. Fortunately, that landmark dome survives. 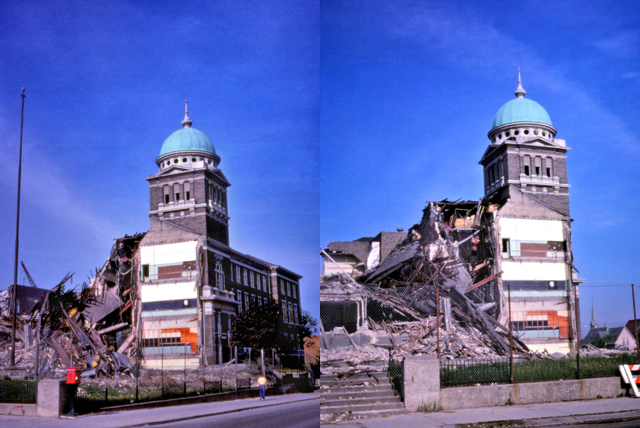 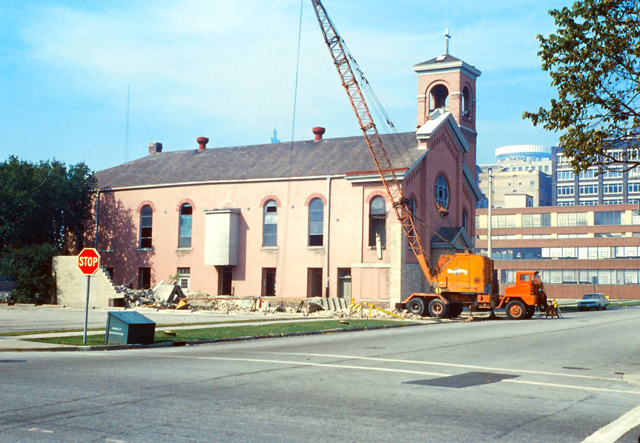 By the time Ray Szopieray took these photos in October 1967, the Blessed Virgin of Pompeii – built by the Italian community at 419 N. Jackson St. in the Third Ward in 1904 and lovingly known as the Little Pink Church – had become orphaned in its neighborhood, most of the residents of which had already been cleared by urban "renewal."

But, still, the memories of this church are powerful and beloved. 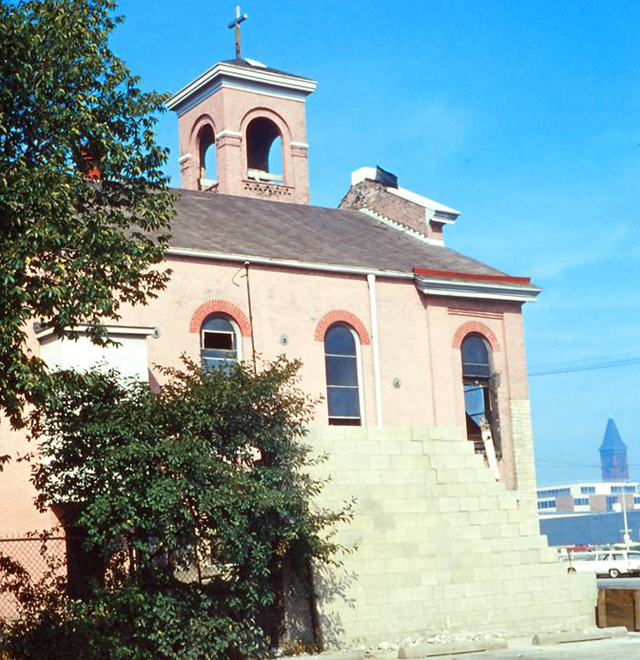 Clearing a block for the First Wisconsin Center 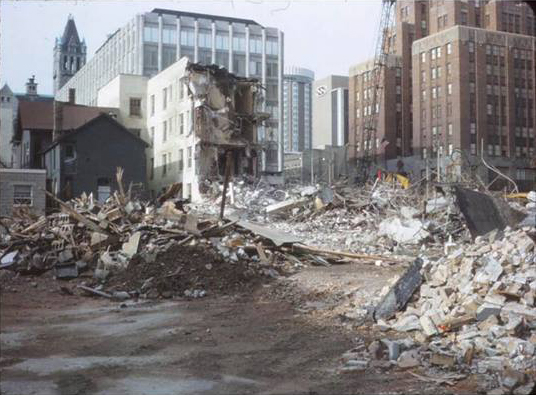 The U.S. Bank building at 777 E. Wisconsin Ave. remains, 45 years after it was built, the tallest building not only in Milwaukee, but in the state. You'll be unsurprised to hear that an entire square block of buildings – including hotels, restaurants and apartments – was razed to make way for it.

Ray Szopieray, of course, was there to capture it in Kodachrome in November 1970. 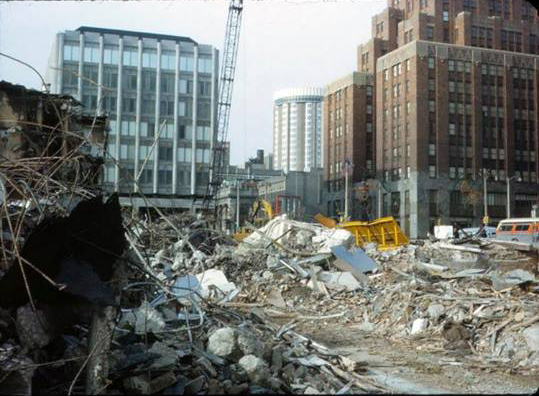 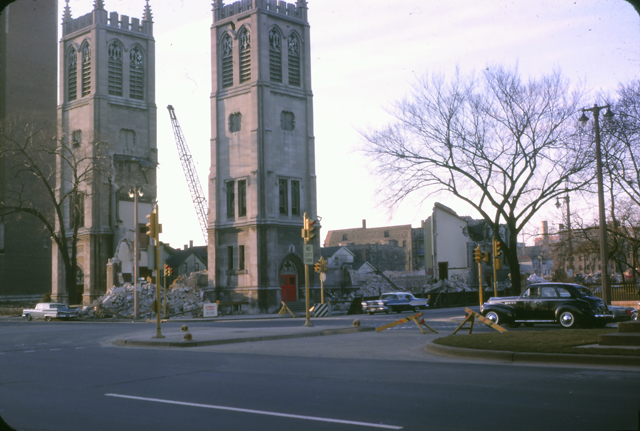 The First Methodist Church (aka the Spring Street Station and Grand Avenue Methodist Church), located at 1010 W. Wisconsin Ave., was another of the many old Milwaukee churches to meet its demise for "progress."

Designed by Leenouts & Guthrie, the church was built in 1907 (though the congregation dates to 1850). It was torn down in 1966 to clear the way for the north-south freeway, changing the character of a stretch of Wisconsin Avenue that boasted numerous houses of worship.

About the photos and the photographer

We have posted a number of collections of photographs from among the many that the late Ray Szopieray took during his perambulations around Milwaukee over the decades. While many of his images are in the collection of the Milwaukee County Historical Society, about 1,000 were sold to Leonard Budney of American Estates in Bay View by Szopieray's brother Chester following the photographer's death in 1992.

On a visit to Budney's shop with his father, Karl Bandow asked if Budney had any old photos of Milwaukee. Thus, the slides came to light after nearly a quarter of a century in the dark.

Bandow and Adam Levin, who also purchased some of the slides, have shared many of these images with us in recent years. 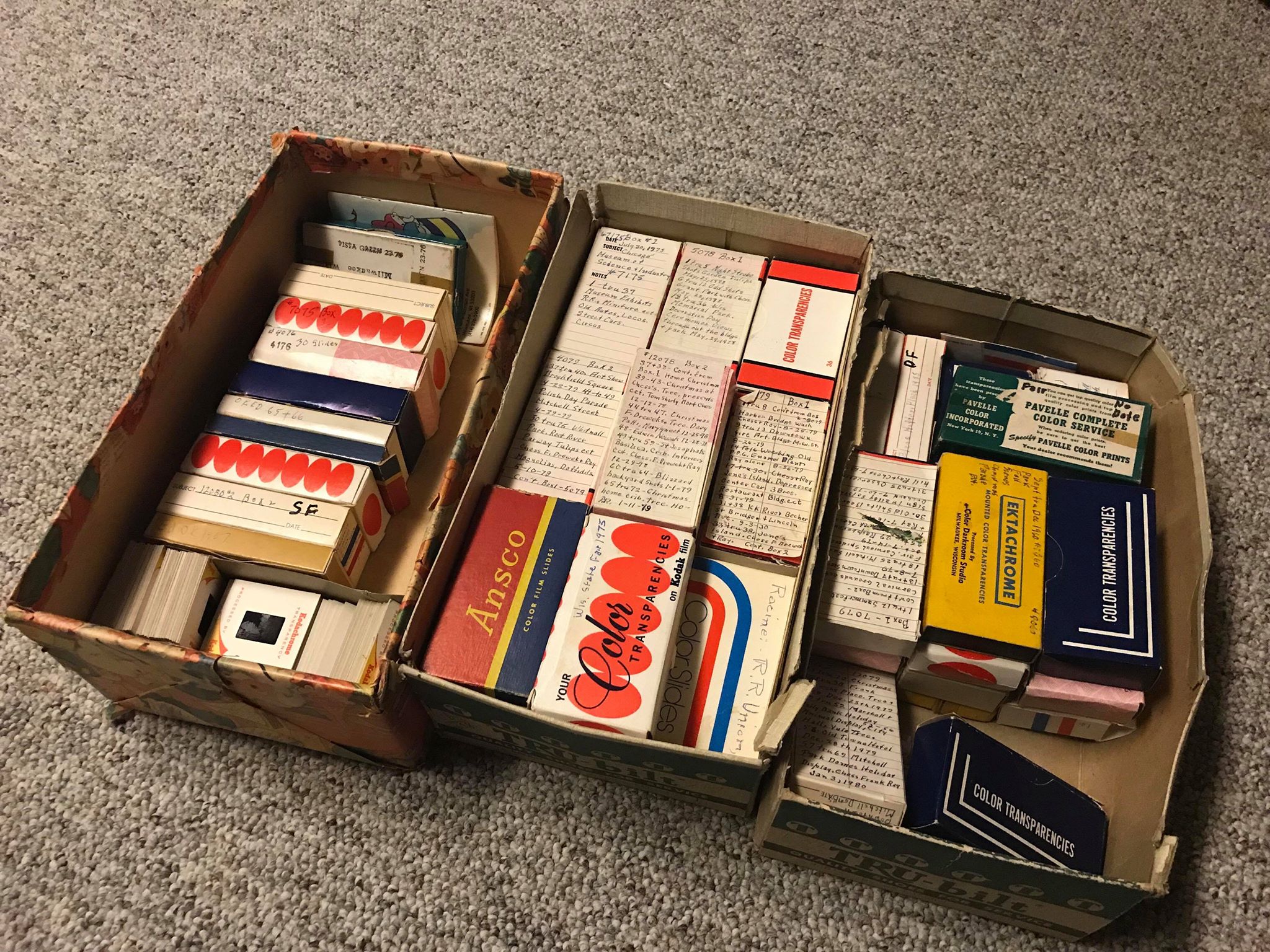 Fortunately, Szopieray worked very methodically and all his images are dated and identify the subjects, says Bandow.

"(In) these old shoe boxes (pictured above) – this is how the slides were presented to me by Leonard and how they were stored all those years by Szopieray," says Bandow, who runs the Historic Milwaukee Architecture Facebook group.

Thankfully, these collectors are eager to share these amazing images of bygone Milwaukee.