Should you stay in Milwaukee to experience the 2020 DNC?

You may have noticed that when we crossed the one-year-out mark for the 2020 Democratic National Convention here in Milwaukee, the number of stories of hotels, business vendor opportunities and more began to ratchet up as well. We all hope that our favorite businesses get lots of exposure that week in July, but what about the rest of us?

You may have noticed that when we crossed the one-year-out mark for the 2020 Democratic National Convention here in Milwaukee, the number of stories of hotels, business vendor opportunities and more began to ratchet up, as well. We all hope that our favorite businesses get lots of exposure that week in July, but what about the rest of us?

Should you be hightailing out of town or taking vacation days to hobnob with celebrities? I asked two-time Wisconsin delegate, lifelong Milwaukeean and voting rights advocate Ann Jacobs to talk with me about why she’s loved being a delegate in the past and why she is thinking of trading in her credentials this time around in order to enjoy all that a host city has to offer.

OnMilwaukee.com: What piqued your interest in becoming a delegate (in 2012 and 2016)? What is it like for delegates before they arrive in the host city?

Ann Jacobs: My friend Christine had attended in the past, and she encouraged me. (You can see the best illustration ever of Christine and Ann inked by New Yorker cartoonist Liza Donnelly here – Ann is in the red dress). Becoming a delegate is challenging, but once selected, you get the information about your hotel and apps for the event itself. It’s several thousand dollars to go, and you have to pay your own way.

Where did you stay? Delegates have to stay at hotels with full service restaurants and conference rooms for their meetings, so I know it limits the choices in every host city.

We stayed about an hour out of town. There are buses that transport you. So accommodations are not a challenge unique to Milwaukee; I don’t think people staying in Illinois is a big deal. They have to have enough hotel rooms in one hotel for the entire delegation, so it’s simply part of the process that delegates are prepared for.

The security perimeter is where the "Secret Service level" of security kicks in, and you need a credential for that day’s convention hall activities to enter the perimeter. That being said, the majority of the events happening during the week will be outside of the perimeter. The hall (in this case, at the Fiserv Forum) is where the TV show happens, but what about everything else?

There is so much that happens outside of the perimeter! Really cool stuff. I got to be on the dais with Reverend Barber to talk about voting rights. There was a movie premier held for the film "Knife Fight" and my husband sat next to Rob Lowe! We got to see Nuns on the Bus in a church basement. It’s such an amazing opportunity to go watch CNN live, see all the newscasters doing their work. I got interviewed by the Daily Show one year!

When you think about your high point experiences at these conventions, what will you never forget?

It was so moving. It was such a coming together. It’s really uplifting. It sounds sort of sappy, but it’s less about mudslinging nastiness but politics at its most altruistic.

If you’re not necessarily into politics, or perhaps if you’re not a Democrat, what would you say you can get from staying in town?

I felt like I was expanding my breadth of what I paid attention to. If there was anyone, anywhere, talking about something that was interesting to us, we went.

And these events were free? (As a note, this is a listing of events outside of the convention hall in Philadelphia in 2016.)

All of them. All of these different groups are trying to talk about the message that they want to convey.

Logistics were really different. Even in a city like Philadelphia that has regularly hosted political conventions, there were still issues. In Charlotte, there were no restaurants open for meals after the business in the hall ended for the day. If I were a restaurant in Milwaukee, I would hire a teen with a sandwich board and handbills and have a grab-and-go menu for delegates at the end of the night. They have to get on their buses, so time is important. And you need to eat! 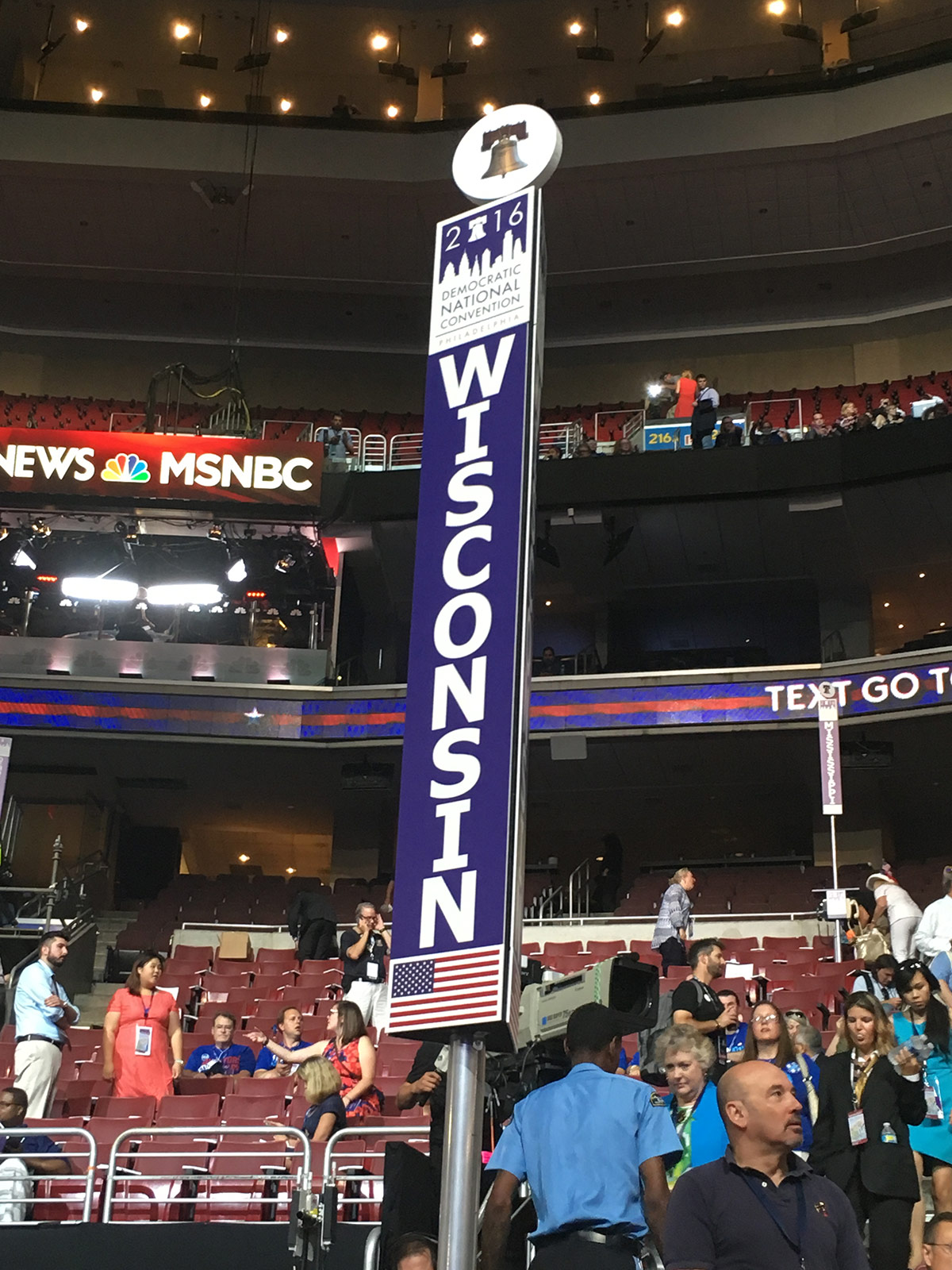 It’s such an amazing experience, there are really great people in Milwaukee that ought to be able to experience it (as a delegate), but what’s available on the outside is so cool also. You can be a part of it without being a part of it. I hope there are live broadcasts at Pere Marquette Park, with food trucks, a Jumbotron ...

Why leave? This is remarkable.

Everyone wants to volunteer in the convention hall, but in the delegate hotels you get to meet members of Congress and tell them where to get the best cup of coffee. These are all things that we don’t get to do every day in Milwaukee.

I remember in Charlotte, a number of volunteers working at the security gate checking credentials got to meet Jesse Jackson. They all got to talk to him, take photos. They were never going to get in the hall, but this is the kind of thing that happens. While the chances of getting into the hall may be small, you can take a volunteer role with an organization you believe in or spend your time taking advantage of what is going on in the city.

You could also meet some interesting people by being an Uber of Lyft driver for the week! You never know who will wind up in your car.

There is so much more to convention week than being a delegate. There are so many opportunities for things you never get the chance to do. It changes the tenor of the city, right? The city becomes a friendlier place, everyone is from out of town, everyone is trying to figure out how to get somewhere. Be a volunteer, be part of it!

Meagan Holman Special to OnMilwaukee @@meagan_mke
Meagan Holman is a public and nonprofit leader. She loves all things Milwaukee, including bourbon old fashioneds, locally-sourced cheese curds and public Montessori schools ... and she can't wait to tell out-of-state delegates in 2020 all about it!