Necessity is the mother of invention: Dock18's housemade liqueurs

If you've been to Dock18 Cocktail Lab, you've experienced firsthand what a cocktail tastes like when it's hand-crafted from the bottom up. Part of its panache is the reliance on housemade liqueurs.

If you’ve been to Dock18 Cocktail Lab, you’ve experienced firsthand what a cocktail tastes like when it’s hand-crafted from the bottom up.

That’s not the end of the world, right? After all, Twisted Path makes mighty fine vodka, gin and rum.

But, think about it. Even a well-stocked home bar needs the flavor-packed punch of liqueurs like vermouth, Cointreau and campari in order to make basic cocktails like martinis, margaritas and (well, if you’re like me) the occasional negroni.

So, what is Dock18 doing? Making its own liqueurs, of course. 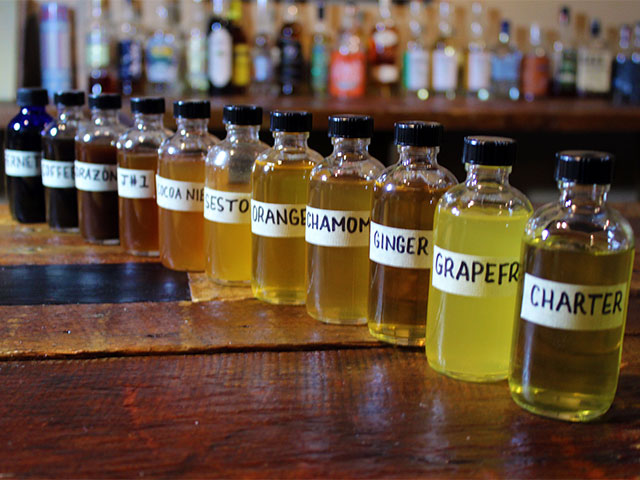 "Opening Dock18 was somewhat daunting given the amount of liqueurs we needed to make," says Bittercube co-founder Ira Koplowitz. "But we had a head start, as we've been making a cacao nib liqueur, a creme de flora, orange liqueur and various other liqueurs at bars over the last 6 years."

Brandon Reyes, a Bittercube-trained bartender, got his start as a bar back for The Hamilton before taking on gigs at Blue Jacket, Fink’s and most recently Braise Restaurant.

But, since starting with Dock18, he’s become the resident liqueur engineer. And, in his deft hands, the bar has created a collection of over 17 house-made liqueurs over the past three months, including orange, coffee, cacao nib, grapefruit, chamomile and a variety of other creative takes on classics.

"The challenge of all of it is really engaging," says Reyes. "Overall, the goal is to have enough liqueurs so that we can make all the cocktails we’d like to make, along with variations on those cocktails. But, we’re working with a pretty restricted number of ingredients, so it takes a good deal of thought to really come up with something that meets our needs."

The art of the liqueur

And making liqueurs for Dock18 isn’t simply about trying to copycat a recipe for creme de cacao.

"It’s actually more about taking the elements that we like about a certain liqueur and then putting our own twist on it," says Reyes.

Some of the liqueurs are as basic as they come. Orange liqueur, which can be a substitute for Triple Sec or Cointreau, begins with the maceration of fresh orange peels in a high proof neutral spirit. Once the orange flavor has been extracted, the spirit is strained and an orange syrup – created by macerating orange peels in sugar – is added. 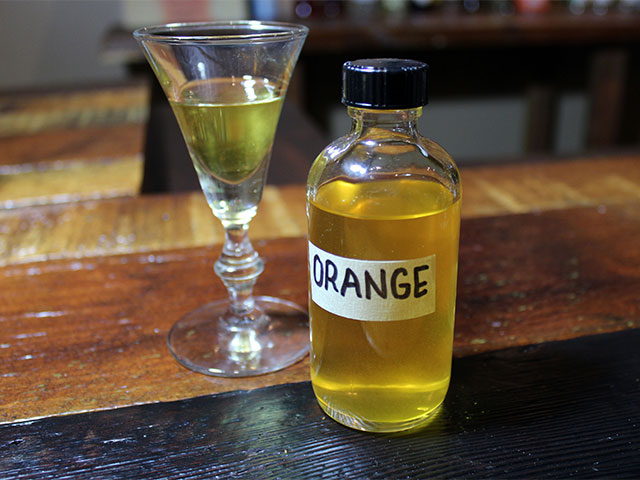 In some ways, it’s pure science.

"Osmosis is the main process used to make liqueurs," notes Reyes. "Flavor compounds are extracted from fruit with either sugar or alcohol. In this case, we use both. Since there’s so little water in the high proof spirit, it pulls the water from the fruit, along with flavor compounds. Meanwhile, the sugar pulls out the essential oils. Putting them together gives you a really nice rounded orange flavor that you wouldn’t get from one or the other individually."

Other liqueurs are more complexly flavored.

Take the Dock18 Charter liqueur, for instance. It’s bright and herbaceous and fashioned after the idea of Chartreuse, an age-old French liqueur made by the Carthusian Monks. The storied liqueur, made from a highly guarded recipe, supposedly contains 130 herbs, plants and flowers. 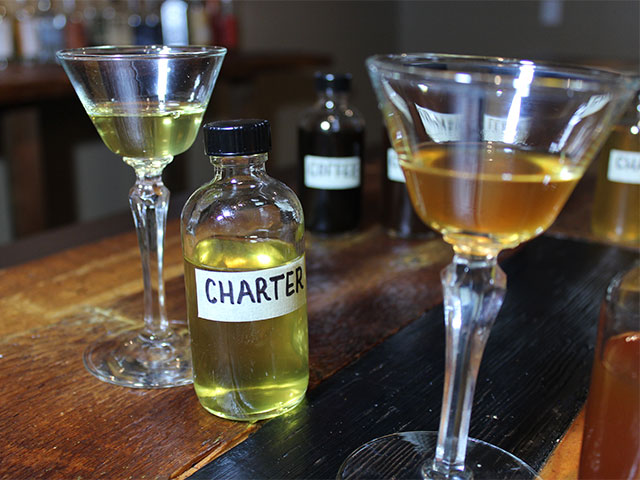 "When you use Chartreuse, you’re looking for that sharp herbal edge that it brings to the table," says Reyes. "Through research we were able to find an old recipe, which we modified to fit our needs. But, it took a while to get it where we wanted it… when you’re using 20 or 30 different things, it can be difficult to figure out what’s off if something isn’t in balance."

Dock18 has also made what it’s calling Sesto liqueur. Named for Sesto San Giovanni, the city in Italy in which Campari was first produced, the liqueur is meant to be a stand-in for the popular add-in for highball cocktails.

"When it’s combined with seltzer, that susses out some of the subtleties in it," says Reyes. "But, this is one liqueur we’re still working on. I’d love to put a Negroni-type drink on the menu; but right now it’s just not bitter enough."

One solution Reyes has tried is to combine the Sesto with a housemade Fernet. Fernet, an herbal digestif, is bracingly bitter with a minty eucalyptus-like flavor. 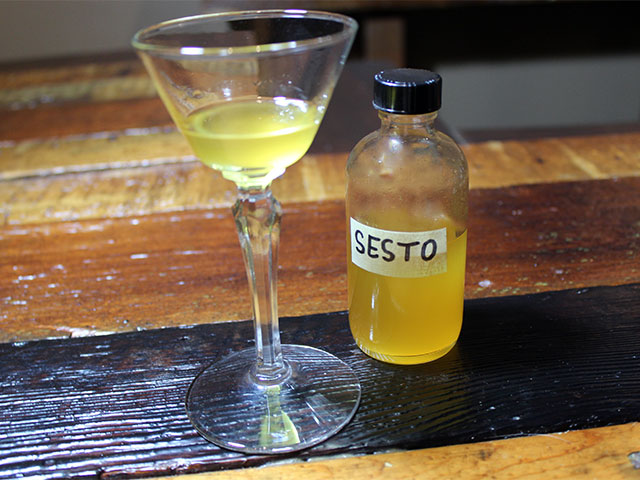 "Because it’s so bitter and pungent, it doesn’t find its way into cocktails so much. But, we made one called The Balancing Act’ that was a bit like a Negroni. It had gin, housemade vermouth, Fernet and Sesto. The idea was to bolster the Sesto."

The current version of Fernet being used at Dock18 is an improvement on a recipe originally concocted by Koplowitz and the Bittercube team.

"I was up in Minnesota with my partners Nick [Kosevich] and Marco [Zappia] and we sat around a bottle of Fernet Branca and formulated a recipe, not to mimic but as adoration for the product," he say. "After about half a bottle and an ingredient list of 30 botanicals, we figured it was time to give it a rest. At the end of the day, we want all of these recipes to be our own. The second version we’re using at Dock18 is even better than the first!"

But, the challenge doesn’t end once the liqueur is made.

"These liqueurs don’t necessarily stand in one-to-one for the traditional liqueurs you have behind a bar. So, it really makes you very thoughtful about building a great cocktail."

In terms of deciding what liqueurs to make, Reyes says that, in part, it’s a matter of seasonality. Liqueurs last indefinitely since they are comprised of a high level of spirits, so it’s a convenient way to preserve the flavors of fresh fruits or other botanicals that are fresh and in season.

"We also have our preferences in terms of what types of cocktails we’d like to make, and what liqueurs we’d need to make them," he says. "Sometimes it’s just a matter of running across interesting things in books we’re reading."

Koplowitz notes that, despite the initial challenges, the Dock18 program is coming along well.

"Having Brandon [Reyes] on board has been integral to the success of the program," he says. "He has executed our vision well and he's brought so many great ideas to the table. The process of creating this library of liqueurs is very exciting."

Reyes says he’s currently working on a liqueur that pays homage to Cynar, an artichoke based bittersweet liqueur which captures notes of chocolate and caramel along with a deep earthy bitterness.

"It starts off with a wine base, typically," he says. "Since we can’t bring wine in, we’re looking for a good substitute… probably a juice made from a specific varietal of grapes."

In fact, Reyes is now convinced that – even if he didn’t have to – he’d still spend the time to make his own liqueurs.

"I’m thinking about things a lot differently. Not only do I have the opportunity to tend bar at Dock18, but going through the process to make all of the liqueurs that we’re using, it’s a different thought process. It’s definitely improved my palate, and it’s a path I definitely see myself on for the considerable future."

Sample some of the liqueurs at Dock18 by signing on for a "Lab Taste." For $8, you can sip a flight of four half-ounce pours of house liqueurs, which are presented in order from lighter and more delicate to more strongly flavored options. Prefer a more broad tasting experience? Opt for the "Grand Tour" for $40. It includes six half-cocktails and four tastings from the collection of Dock18 liqueurs.