Board uses Domes hearing to escalate war with absent Abele

The full county board held a public hearing Wednesday night to discuss the future of the Mitchell Park Horticultural Conservatory ... you know, The Domes.

The hallowed and revered Mitchell Park Domes are currently closed because of structural concerns after cement fell inside the 50-year-old structure. Nobody has been hurt yet, but an ounce of prevention will avoid injuries and big lawsuits.

The full county board held a public hearing Wednesday night – you have no idea how frightening that phrase really is – to discuss the future of The Domes. The board members looked grim and serious before a full house of about 200 people who showed up at the greenhouse annex to talk, listen and clap like mad. 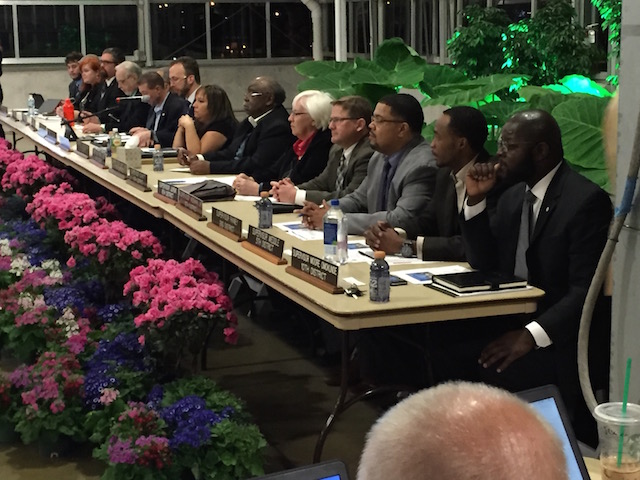 The applause was most fervent when a supervisor mentioned how much the board's feelings were hurt and how angry they were that County Executive Chris Abele wasn't in attendance. Before the proceedings formally began, Supervisor John Weishan told me he was "very upset" that Abele wasn't there. State Sen. Chris Larson, who is running against Abele, was dismissive.

"I know how to fix this," he said. "The figures Abele’s talking about (more on that later) are not close to what building new buildings will cost."

There have been estimates of spending as much as $75 million to ensure that no more cement falls.

When the gavel finally slammed the proceedings to order, Board Chairman Theo Lipscomb was pretty clear that the board didn't think falling cement was the biggest problem.

Before anyone even got a chance at a microphone, Lipscomb handed out a statement that read, in part:

"Clearly it is easier for Abele to travel to Madison and negotiate behind closed doors to hand over $80 million of the public’s money to the private Bucks arena than to meet in the open with local residents about the future of the Domes, iconic park structures that belong to the public."

Thirteen of the 14 supervisors are anti-Abele, and it’s so serious that Lipscomb even shut down Claire Zautke, who drew the short straw and had to take Abele’s place because, she said, he was at a national board meeting for the Girls and Boys Clubs of America.

Zautke is the county's Director of Community Affairs, and by the time she had used the word "robust" three or four times to describe the "community engagement process," Lipscomb had had enough.

After that auspicious start, the county board did what it does best. It sat there, listening, occasionally announcing that they wanted input from the public, then going to the bathroom or talking or waving or nodding to political constituents or checking their phones while the public actually talked.

Here’s what everyone decided.

Everybody who spoke thinks something needs to be done to keep the Domes going into the far distant future. The words "legacy" and "historic" and "invaluable" were bandied about freely.

Roger Krawiecki is the President of the Friends of the Domes organization which has about 16,000 members. He called the Domes "a magical place" and urged board members provide for major repair of the Domes or build another building that "can take us into the future."

The county executive has asked for $500,000 more from the contingency fund to fix things up enough so that all three Domes (The Show Dome, The Tropical Dome and the Desert Dome) can be reopened. The board is going to spit in the air a lot, but they’re going to end up approving the money.

The plan engineers seem to be talking about most seriously is putting some kind of netting or something inside the 85-foot high domes to catch anything that falls.

"We can fix things for five or six years," Weishan said. "After that, who knows?"

It’s that kind of forward thinking that gives you such confidence in all these local elected bodies.

"I’m optimistic," said Domes Director Sandy Folaron, viewing the crisis through rose-colored glasses. "I think it’s time we had a discussion about the future of the Domes, and I think the public is going to come out in strong support."

There have been estimates of spending as much as $75 million to build a new conservatory and update everything so that no more cement falls on tourists.

"This community has been asked for lots of money," Folaron said. "The arena and the stadium: It may well be time to invest in the Domes."