It's been a long haul for Draft & Vessel owner, Nathaniel Davauer, who purchased a two story home at 7479 Harwood Ave. in 2016 and -- two years later -- moved forward with a proposal to turn the residential property into a second craft beer destination.

It’s been a long haul for Draft & Vessel owner, Nathaniel Davauer, who purchased a two story home at 7479 Harwood Ave. in 2016 and – two years later – moved forward with a proposal to turn the residential property into a second craft beer destination.

Initial plans included renovation of  the 1880s vintage two story home. But Davauer says the prospect of converting the house into a commercial property became increasingly complex and financially prohibitive, so he opted instead to demolish the residence and move forward with the creation of a new, custom designed building.

"Ultimately I began to doubt my ability to really create a space there, and an experience that was awesome," he says. "And I was terrified to invest the money and end up with something that just wasn’t that good. So we went back to the drawing board with the goal of creating something that really captures the subtle magic that I’m always looking for in a space."

What's going on at 7479 Harwood in Tosa Village? I heard it was a fire. It was a lightning strike... It was a wild bear attack...

Construction on the project, which was designed in collaboration with Patrick Jones of Ramsey Jones Architecture,  began January 1, a full six months later than expected. In fact, Davauer says his initial plan was to have the bar open by March of 2020.

But life has a way of derailing even the best laid plans. In this case, he says, the delays may have been a blessing. After all, the COVID-19 pandemic shut down the greater Milwaukee area in mid-March, which would have been not long after the bar was scheduled to open.

Instead, as the project pushed forward, Davauer used the time to hone in on details for the property that will make it a one-of-a-kind location. 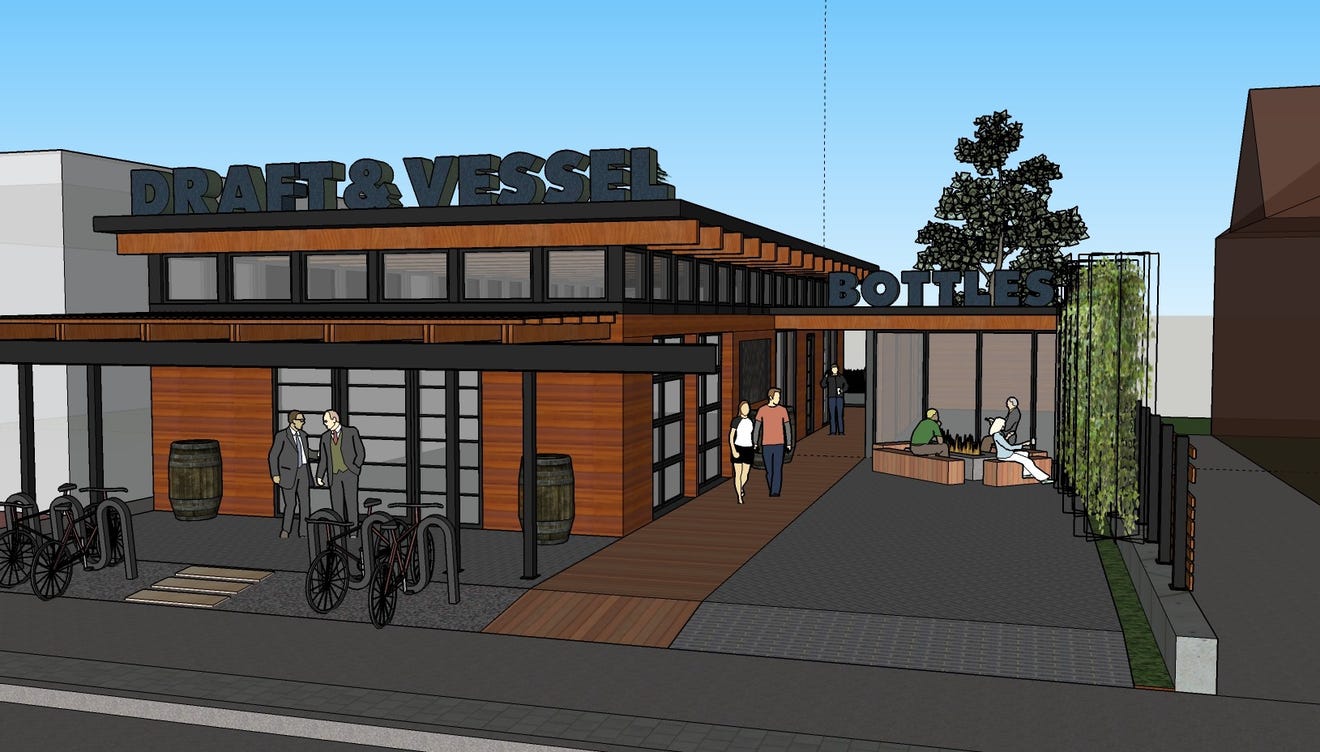 Plans for the new Wauwatosa location, which will be about double the size of the Draft & Vessel in Shorewood, will include a variety of integrated spaces: a bar, a hard-scaped courtyard, a beer school, a beer garden and a bottle shop.

Most importantly, each element of the plan will be executed with an eye for the sort of details that will create not only a space to gather, but a welcoming environs that blends myriad industrial textures, art, nature and a series of interconnected areas that form a unified, memorable and engaging environment.

The main building, Davauer says, will house a larger bar than that which exists currently at the Shorewood location,  but which embraces a similar intimacy as well as design details that reflect both the brand's aesthetic and identity as a one-of-a-kind destination.

For instance, the exterior of the building will be wrapped in siding made from the cypress staves of reclaimed pickle barrels, an idea Davauer gleaned from colleague and developer Juli Kaufman of Fix Development.

Reclaimed staves from giant pickle barrels will be our siding of choice on this one of a kind beer bar.

Meanwhile, three sides of the building will feature siding made from corten steel (or weathering steel), a product comprised of numerous steel alloys which form a stable rust-like appearance that weathers over time, evolving from grey to orange and purple to brown with exposure to the elements. A portion of the roof, just above the entryway, will also feature the steel in corrugated form.

This building will have a lot of corten steel. Cool stuff. Rusts quick but then seals itself like that indefinitely. Ends up with a great orange/purple patina. Pay attention over the next year and you can watch it change. Big rain a few days ago has already got it started. . Ramsey+Jones Architects

The corton steel will also serve as a textural element for the west side of a smaller, but keenly connected building that will house a flexible, rentable private space that Davauer calls the "beer school." The room will allow for cicerone study groups, home brew meet up groups and other small gatherings. Meanwhile, the front of the building will accommodate a bottle shop framed out on the North side  with a large picture window. Davauer says his vision is that the beer cans inside the shop will form a design element in and of themselves.

"I love the creativity that’s come about in the can world," says Davauer. "So it’s a beautiful thought to have a wall of cans featuring this beautiful art on display for people to enjoy."

In front of the bottle shop will be the "hops court," a hard-scaped patio space with a wall of namesake hops growing along the western edge, providing both a living green feature and a multi-sensory experience as the plants develop their resin-filled cones (flowers).

The buildings which contain the bar and bottle shop will be connected by "the sluice" a modern, visually stimulating pass-through which connects both the front hops court and the area behind the bar. The sluice will feature a window looks into the bar (and vice versa), as well as an intricate, brightly colored mural designed by local artist Mark Gray, which Davauer describes as a mash up of "beer history and this sort of tripped out fantasy world."

Just when you thought this building couldn't be any better... SO pleased to share some initial drawings from @markgraypainter for the mural running the length of The Sluice. This will be absolutely one of a kind. Yes, that is a bear dancing in a mug of beer. Yes, that's a Fredrick Pabst sun he's basking in. ï¿½`ï¿½

Continue through the art-filled sluice on a clement day and one will find the beer grotto, a landscaped beer garden of sorts offering a serene space to enjoy a natural view while looking out over the Wauwatosa Village.

"For me, one of the most exciting things about this is telling the story of the brand through the space," says Davauer. "We’re spending more to make this a great, memorable space than we’d need to; but that’s who I am. In the end, we’re investing 20 times as much in this as we did in Shorewood. So it’s growing into a very different beast…"

The grand opening that may not be

Construction is likely to be completed in about two months or so, says Davauer, his excitement clearly dampened by the notion of opening in the midst of a pandemic.

"The real challenge is that we’ll be opening in a really complex social and commercial scene," says Davauer. "Ideally, we’d want our grand opening date to really be worthy of a project that’s been three years in the making. And the tragedy is that we can’t really do that."

It’s a quandary that Davauer says weighs on his mind every day.

Possible plans include opening as scheduled, but operating in a reduced capacity (potentially reservation only) or delaying a full opening until spring of 2021 and opening for carry-out only during the interim.

"Creating a community space has always been the motivation and drive for my business," he says. "Honestly, I could run an ice cream shop or a tea shop and it would be the same. But right now community spaces are complicated. Business is complicated. But, in the end, we have to do what’s right for our community."

For more thoughts from Davauer, tune in to our latest episode of the FoodCrush podcast during which he shares his thoughts on operating a bar and community  gathering place during COVID-19.