For many years, I would drink whatever vodka was in front of me cut, of course, with the finest sugary fruit juice. I didn't ever really get excited about vodka. But the moment Aylesbury Duck Vodka graced my lips two years ago, I knew my cheap booze swilling days were over, and for the first time in my life, I became excited about vodka.

For many years, I would drink whatever vodka was in front of me cut, of course, with the finest sugary fruit juice. I didn't ever really get excited about vodka. But the moment Aylesbury Duck Vodka graced my lips two years ago, I knew my cheap booze swilling days were over, and for the first time in my life, I became excited about vodka.

Never before had I tasted such a complex and delicious vodka. The flavor is enticing, rich and spicy. There are floral notes, jabs of spicy citrus, and even hints of sea brine with this 80-proof spirit vodka. Should I keep saying vodka?

Aylesbury Duck is obviously satisfying on many levels -- and the tale about how the odd name came about is definitely worth telling. So here's the story. About this vodka. Vodka.

It was the winter of 2013 and I was working at a bougie club in Chinatown where the drinks were expensive and the clientele was composed of socially-inept millionaires in white suits. I was the coat-check boy and, along with my responsibilities of hanging up expensive jackets, shawls, and capes, I got hundreds of dollars of free drinks. Life was fine.

And one day, I stumbled into a tasting where a nice British fellow was pitching a vodka called Aylesbury Duck. I was intrigued by the name, and listened to the story of how it all came to be.

Jason Kosmas, one of the co-creators of the vodka, expressed how he wanted to create an identity that would "stand out against all the stern and serious names used by the vodka industry." 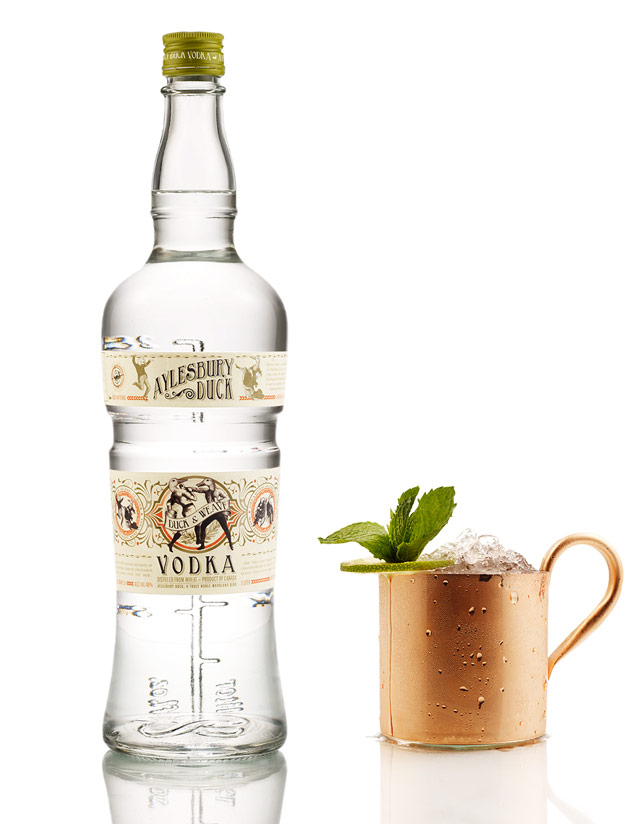 We did a little more digging with Jason and he told us this story: "The name was suggested by partner, Kris Roth. In the middle of a list of over 50 suggestions most of which rather obvious sounding and boring was the name ‘Aylesbury Duck.’ Baffled, the question was asked, ‘what is an Aylesbury Duck?"

His response was that Aylesbury Duck was the most noble of the woodland birds, which of course has nothing to do with vodka."

Naturally, the team was nervous about assigning such a strange name to such a potentially big vodka. Chris Edmunds, of United Creatives in Manchester, told the guys that he would give them a week to mull it over and, if they changed his mind, he wouldn't design the label.
The following events sealed the Aylesbury Duck as the official name and mascot for the vodka:

"Chris was driving down a country lane in England on his way to meet the in-laws when he came across a group of Aylesbury Ducks stopping him from driving down the road. That Monday he called to tell me he had met some Aylesbury Ducks over the weekend and that it was an omen that we should move ahead with that name."

That serendipitous moment sealed the vodka's fate and made the name as memorable as its taste. And now you know. Obviously, I suggest everyone go out get it, pour it on the rocks and swill down.

Jeremy Glass is a Connecticut-born writer with a deep appreciation for pretty ladies, fast food and white T-shirts.

He's the Vice editor for Supercompressor.com and recently released a book of short stories called Aimless.