Imagine digging into a pint of deep, rich chocolate ice cream. It's velvety smooth, interrupted only by generous pieces of chewy, fudgy homemade brownies.That's exactly what you get when you taste the chocolate brownie ice cream from Scratch Ice Cream.

Scratch is owned by partners Ryan Povlick and Dustin Garley, two imaginative ice cream lovers who’ve made it their business to create some of the best ice cream around.

"We’re small batch, so we really focus on the details," notes Garley, who handles the baking for most of the inclusions. "Our maximum batch size is about three gallons at a time. We hand pack all of our pints. And we make almost all of our add-ins from scratch, including the brownies, the cookie dough, the caramel and the cheesecake bites."

"The inclusions are one of the things that sets us apart," says Povlick. "But, we’re also known for how creamy our ice cream is. Most places pump a lot of air through their ice cream, but we’re small. So, the key for us is in our ice cream base. It’s custom made and it has a pretty high level of egg yolks … not enough to be custard, but enough to make it really creamy."

Povlick, who describes the business as "a sort of craft Ben & Jerry’s," says the company sprang from a project he was working on at Yo Mama, a company owned by his aunt and uncle, Becky and Scott Berger.

"I started working for them about three years ago, doing a variety of odd jobs," he says. "But at some point, Scott asked me to help him develop a bunch of new yogurt flavors.

"I’m not a big yogurt guy," admits Povlick. "But I loved the process. And love ice cream. So, as time moved on, we got an ice cream machine, and we started playing around with developing new ice cream flavors."

Povlick says he took the work seriously. He read as many books as he could about ice cream and tried a variety of recipes. As time went on, it became obvious that he’d stumbled upon something delicious. And Scott offered to help Povlick launch the business.

"They really taught me how to work, how to pay attention to the small details," says Povlick. "And basically my uncle gave me the opportunity to create this." 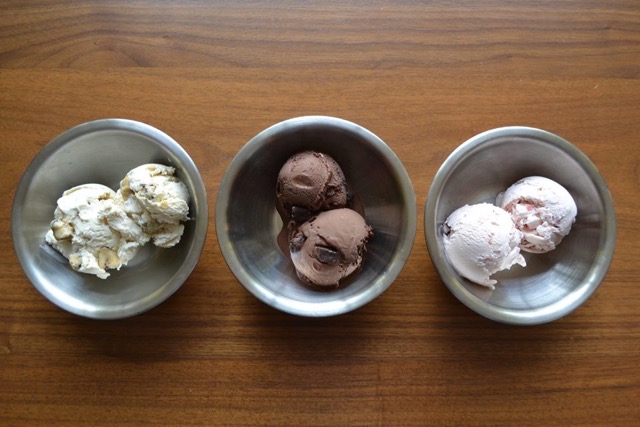 They began with making hand-packed pints of a few basic flavors. Last year, they added dipping cabinets at both Yo Mama locations in Brookfield and Wauwatosa, both of which feature eight rotating Scratch flavors. As the business grew, Povlick also approached Garley and asked if he wanted to be a partner.

"I remember he asked me if I wanted to help him make some of the best ice cream out there," recalls Garley. "And I was like ‘Sure.’ It’s really been a lot of fun.The more people want the product, and the more accounts we take on the more exciting it gets, and the more drive we have to really do it even better."

"We’ve made an ice cream with lacuma fruit for C-Viche," says Povlick. "And we’re working on a chai tea ice cream right now for La Masa."

He says the process has been a lot of fun.

"I’ve eaten ice cream before I went to bed almost every night for the last 20 years," notes Povlick. "I probably love it more than your average human being. So, having the opportunity to launch a business making one of my favorite things has been great."

Povlick says he’s committed to focusing on organic growth for Scratch. "Right now we’re focused on growing the wholesale business," he says. "From there, we’ll see. Our goal is to make the best ice cream possible and get it in the hands of as many people as we can."

Hot ham and rolls: 13 spots to get your fix