The Milwaukee Public Museum's new exhibit, "Crossroads of Civilization," was developed over the course of five years and in part through the feedback of a teacher focus group.

When Ellen Censky started working at the Milwaukee Public Museum (MPM) in 2008, plans for the "Crossroads of Civilization" exhibit, which opens March 15, were already on the docket.

"We didn’t know exactly how or when we were going to do it," says Censky, who is the MPM’s senior vice president / academic dean. "But we knew it was a topic and timeframe of great interest."

"Crossroads of Civilization" is the MPM's first new permanent exhibition in more than a decade and offers a glimpse of ancient Asia, Africa and Europe, spanning over 5,000 years, as societies grew and developed architecture, communication, social activities, belief systems, complex economies and military tactics.

The concept was originally included in an exhibit called "Temples, Tells & Tombs" which closed in 2008 and is now showcased in the 4,000-square foot space that originally housed the education offices – now on the first floor.

To prepare for the exhibit, extensive research, including multiple focus groups, was conducted.

One of the focus groups included about 20 middle school teachers from public and private schools in Milwaukee and beyond.

In 2011, the MPM sent out an email to a large group of teachers, inviting them to participate in an unpaid, three-hour focus group. Kids study the information presented in the exhibit during middle school which is why primarily teachers of this grade level were recruited.

The MPM hired an outside company to conduct the focus group.

"We wanted the teachers to speak candidly and so no one from the museum was at the focus group meeting," says Censky. "We were obviously very interested in what they were saying, but didn’t want to influence their responses in any way."

The teachers were asked to develop an ancient civilizations lesson plan prior to the focus group that provided one idea or message that they wanted their students to take away from the unit. These lesson plans helped the museum understand what and how to present the information so it would be valuable and useful to teachers and kids – as well as interesting to the general public.

The MPM, which hosts about 100,000 kids every year, also conducted individual interviews with families and hosted a second focus group with senior citizens.

"Seniors are another demographic that’s growing. They are coming to the museum more, often bringing their grandchildren," says Censky.

"What they had to say was very positive," says Censky. "One of the valuable aspects of this exhibit is that it’s permanent, so teachers can develop lesson plans that they can use for more than one year which isn't the case with traveling exhibits."

The interactive aspect of "Crossroads" is one of the exhibit’s strongest offerings – especially for kids.

"The younger generation is so used to using computers and iPads and cell phones that this is expected of all museums in the 21st century," says Censky.

Interactive offerings include a 30-foot touch-screen timeline divided into three regions: the Near East, the Mediterranean and Egypt from 3500 BCE to 500 CE. Visitors can also "fly" through an Egyptian temple, virtually unwrap a mummy, watch the expansion and contraction of the civilizations through an interactive map and watch videos about the making of the exhibit and more. 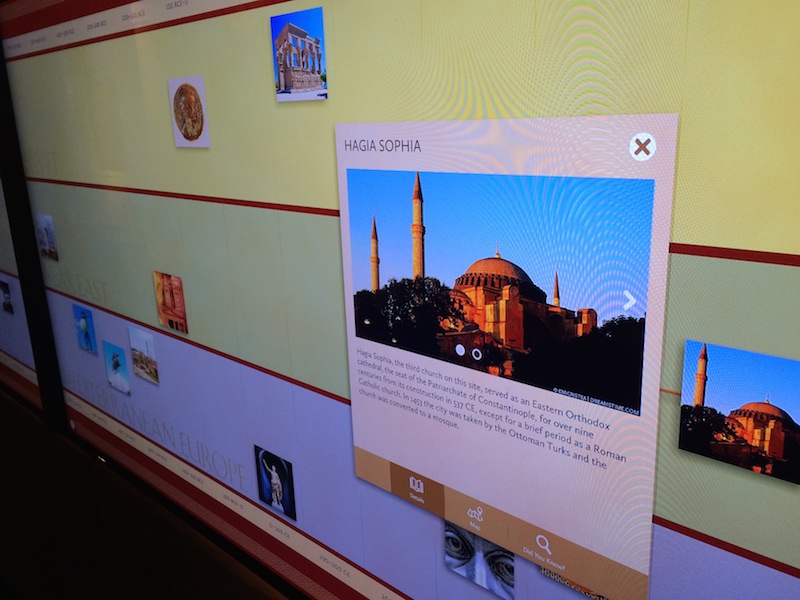 Teachers also responded that they appreciated how the exhibit intertwines histories of civilizations.

"Through the exhibit, kids – and adults – learn what’s happening in different parts of the world at the same time in history," says Censky. "Often we are taught about one place at a time and the information is isolated a

nd unconnected to the rest of the world at the time."

Although "Crossroads" is a state-of-the-art exhibit, Censky says this is nothing new for the MPM. In the museum world, there is a revered "Milwaukee style" that is referred to because the MPM has always offered an immersive environment that provides an experience to visitors that takes them to a different place and time.

The MPM has also always been known as an interactive museum.

"We think of ‘interactive’ these days as something that includes technology," says Censky. "But the museum was the first in the nation to add the rattlesnake button 40 years ago. This is a form of interactivity as well as a secret that everybody wants to get in on. Once you press the snake button, you become part of that club. It’s really something special."