Egg in a hole: This polyonymous dish might be the best breakfast ever

I know very few people who haven't eaten the dish often referred to as "egg in a hole" or "egg in a basket." In fact, nearly everyone I talk to has a fond memory of eating eggs fried in toast, the deceptively simple dish comprised of modified slices of (usually) buttered bread encasing a fried egg. But very few, I've found, can agree on the name.

I know very few people who haven’t eaten the dish often referred to as "egg in a hole" or "egg in a basket."

In fact, nearly everyone I talk to has a fond memory of eating eggs fried in toast, the deceptively simple dish comprised of buttered bread (with a hole in the center) and a fried egg which cooks perfectly nestled inside the hole. But very few, I’ve found, can agree on the name.

I grew up using the term "one-eyed Jack," a name I was half-convinced my cousins had made up. But the widely ranging variations became vividly apparent to me when I got married to my husband, Paul. He’d also grew up eating the toast-and-egg combo; but his family referred to them as "framed eggs."

For years we alternated between calling them "one eyed jacks" and "framed eggs," until we happened upon an even cuter moniker: "toads in a hole." At our house, that’s what they’ve been called ever since … although I've since learned that the name "Toad in the Hole" also references a dish common in the U.K. (primarily England and Scotland) that's comprised of sausages cloaked in Yorkshire pudding batter and served with onion gravy and vegetables. 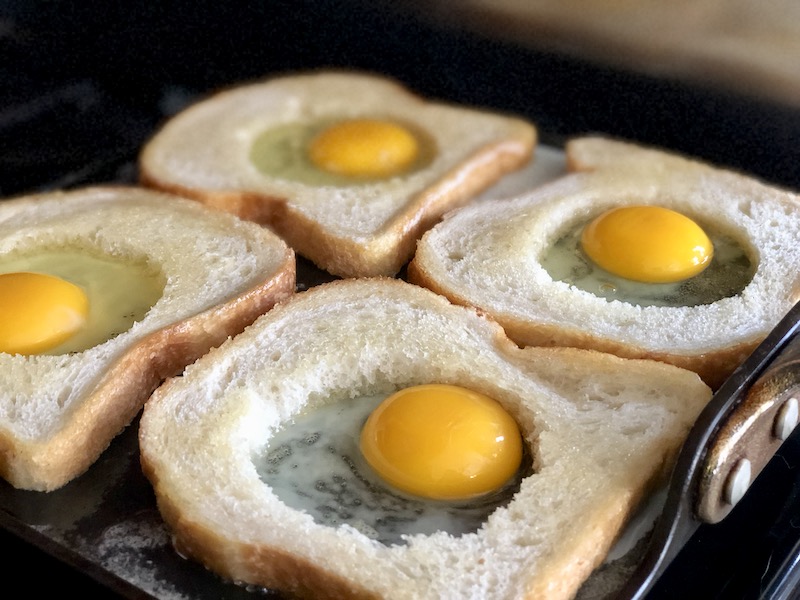 More names than I can count

A quick poll at the OnMilwaukee office revealed a few more names, including "egg in a hole" and one I’d never heard before, the "one-eyed Egyptian sandwich" (a term I'd later learn came from a 1930s film). One of my other officemates says his family actually referred to it as "sh*t on a shingle," a moniker I’d only heard used to describe chipped beef on toast.

The plot grew thicker as I went deeper. In fact, I probably found close to a hundred names as I was scrolling through articles across the internet, in search of a cohesive origin story.

Here are some of my favorites:

A bit of history & pop culture

Some research on my part turned up a host of information. Eater did a relatively deep dive into the dish a couple of years ago, citing that the first noted recipe for the dish was recorded in Fannie Farmer’s "Boston Cooking School Cookbook" in the 1890s. It was called "Egg with a Hat" in reference to the practice of serving the leftover toast cutout atop the finished egg, resembling a hat.

That doesn't really solve the dish's origin story, but it does show that the dish has been a popular part of American culture for a good long time, a fact that's also evidenced by myriad references in film, television and even books.

I found cinematic nods back as far as 1935, when Guy Kibbee whipped up the "one-eyed Egyptian sandwich" in the American feature film "Mary Jane’s Pa." Interestingly, it was Kibbee's notoriety that won out, and the dish was called "Guy Kibbee eggs" for a time.

A few  years later, the eggs became known as "gas house eggs" thanks to Betty Grable who used the term in the 1941 film "Moon Over Miami." And the dish came back to the fore in 1987 when Olympia Dukakis' character Rose Castorini referred to the dish as "egg in a trash can" in "Moonstruck."

Even the dystopian political thriller "V for Vendetta" got in on the action in 2005 during which V cooks up the dish for Natalie Portman.

Of course, more people probably remember the 1996 episode of "Friends" in which the dish gets a nod in a tense conversation regarding Chandler's new roommate, Eddie.

Literary fans might also have come across Roald Dahl's name for the dish: "hot house eggs," which is referenced in his book "D is for Dahl" and "Roald Dahl's Even More Revolting Recipes," a book in which he also reveals the secrets behind edibles like boiled slobbages, nishnobblers and glumptious globgobblers.

Where can you find it

One of the things that surprises me most is that you don’t find the eggs on many restaurant menus. After all, it’s affordable, easy to execute and seems like the sort of thing which could be customized to suit just about any breakfast or brunch menu.

Here in Milwaukee, I found variations at two restaurants. You can get "Eggs in a Basket" at most Denny's  locations. The dish features two eggs fried into the center of grilled cheddar bun halves. It’s served up with strips of bacon and hashbrowns cooked with diced bacon and cheddar cheese.

A version I'd much prefer is found in Whitefish Bay on the weekend brunch menu at Moxie, 501 E. Silver Spring Dr. They call it "Suburban Cowboy Eggs" and serve the eggs-in-toast topped with red pepper pesto.

Maybe you know of others? If you do, please feel free to share them with me in the comments.

IHOP is changing its name to IHOB. So what's the B stand for?