Bobby Tanzilo is slowly becoming a "collector" of old firehouses. Here he explores the first home of Engine Co. No. 4, located in the heart of Downtown.

Lately, I’ve become a "collector" of old firehouses and if my ruminations on them aren’t exactly appearing in proper numerical order, my visits have so far gone that way: I lunched at Engine Co. No. 1 on Broadway and then explored the old Engine Co. No. 2 on North 4th Street.

The details of my visit to Engine Co. No. 3, which restaurateur and owner Peter Sandroni showed me around, will appear in the coming weeks. But in the meantime, I also got the opportunity to get a little peek inside the old Engine Co. No. 4 at 411 N. 3rd St. Downtown.

Admittedly, I got started all out of whack by writing about Ladder Co. No. 5 on Bartlett Avenue, but I digress. 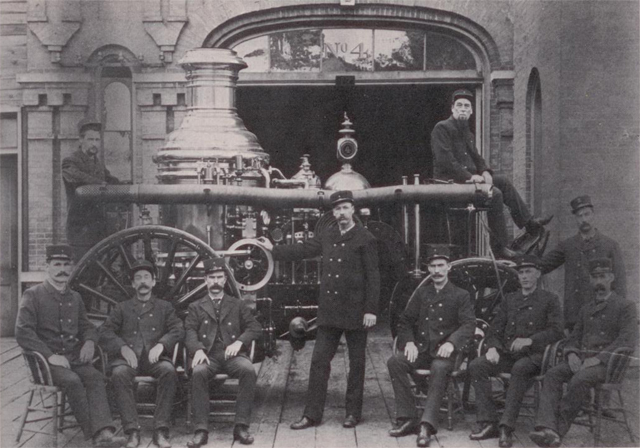 You wouldn’t know it now, but it also had what appears to be a lovely brick facade. The only photo I’ve seen of it (above) shows a low, broad arch, with a row of beautiful windows above the garage door. I haven't been able to identify the architect, but the facade – and the fact the the city used top city architects like Henry Koch during this era – suggests it was someone noteworthy.

But the department didn’t stay there long. By 1888, the city built a stunning new three-story Victorian firehouse (below) with bay windows on the upper floors and a gorgeous tower nearby at 104 Second St. (later 534 N. 2nd St.) at a cost of $17,605. Alas, that building – which was very similar to Engine Co. No. 2’s home on 4th Street – doesn’t survive, but surprisingly, perhaps, its predecessor endures. 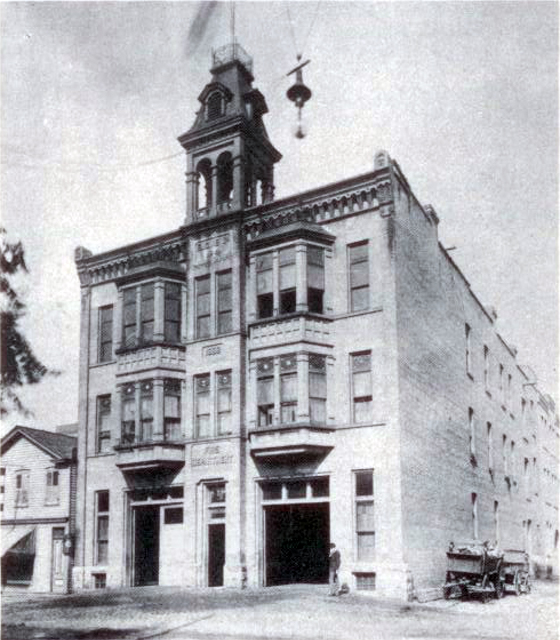 After it was decommissioned, the 1866 building was sold to oil dealer H.J. Delaney Oil & Grease Co. and the 1894 Sanborn Map notes that the structure was formerly a firehouse. By 1910, the Sanborn shows another building added to the back end of the complex in 1901, though it still lists oil as the main trade on the site.

With notations on the buildings like "lubricating oil," "rag storage" and "oil storage" it seems even more amazing the complex survives today rather than going up in a plume of black smoke at some point.

According to the Wisconsin Historical Society Architectural Inventory, a new facade was erected – one that "completely removed all aspects that defined the building as a fire station," including, presumably, the tower.

What it did not erase, however, were the little iron flowers between the first and second floor. That’s an element that appears on other old Milwaukee firehouses, including Engine Co. No. 3 on National Avenue. 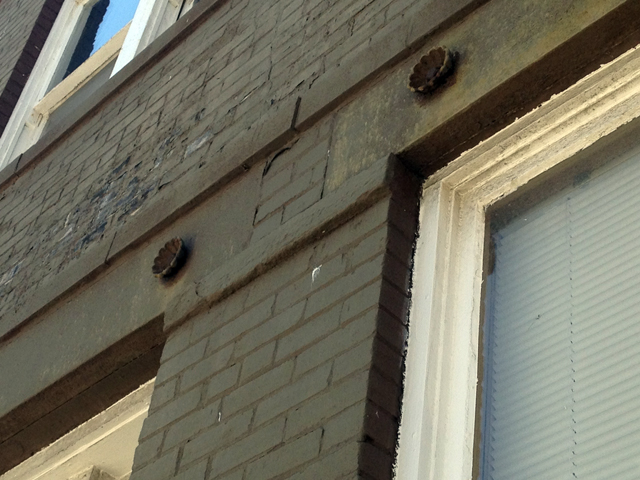 Later, the buildings were home to Portz Tool and Machine Co., which gave way to Ken Michaels Furniture, and the buildings are now storage for that business, which has a showroom two doors to the north.

The front of the building was long ago converted to offices, one of which has what appears to be original woodwork on the floor, ceiling and walls. The other was "modernized" at some point.

But behind that, there are the big open spaces you’d expect and broad openings with sliding, cable and pulley-operated barn doors separating the train of buildings that runs west toward the alley out back.

There’s a lot of what looks like original woodwork and lots of windows on the inside that have long since been bricked over on the outside. A smaller building was built along the north wall, obscuring the outside view of the old firehouse. 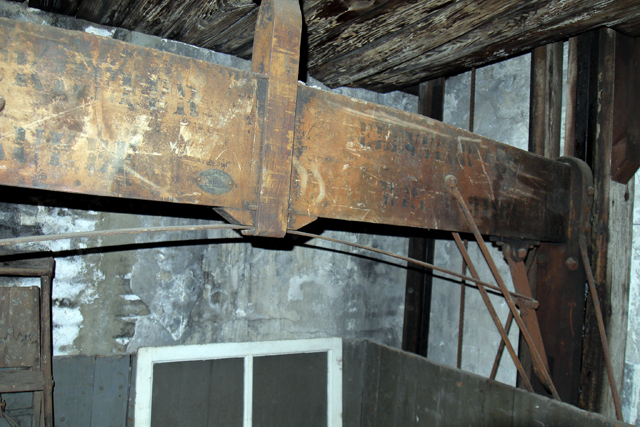 On the ceiling in the old firehouse portion there’s an opening that appears to be a cold air return and what was likely a fire pole hole is now covered with a square plate.

A freight elevator was added to the northwest corner of this front building, but years and years ago. A crossbeam inside it reads "Kieckhefer Elevator, Milwaukee." 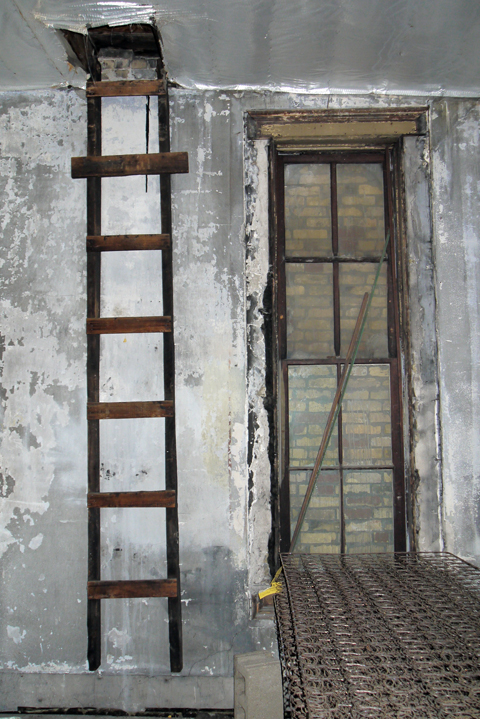 Upstairs, there is a tall, slim, elegant window on the south wall that is blocked outside but extant inside, next to the old wooden ladder up to the roof scuttle.

Out the back windows you can look over the erratic roof line of the former stable and other additions.

In the basement, which even with the light on is dark and damp, there’s a rusting old boiler and a stone foundation.

There really isn’t much of anything left inside to attest to the building’s original use as a firehouse, and that makes sense since it only served its original purpose for a bit more than 20 years and that run ended more than 125 years ago.

Interestingly, Engine Co. No. 4 didn’t last terribly long in its second home either. By 1921, Engine 4 moved in with Engine 10 on Broadway in the Third Ward and in 1930 it shared quarters further up the street with Engine 1. 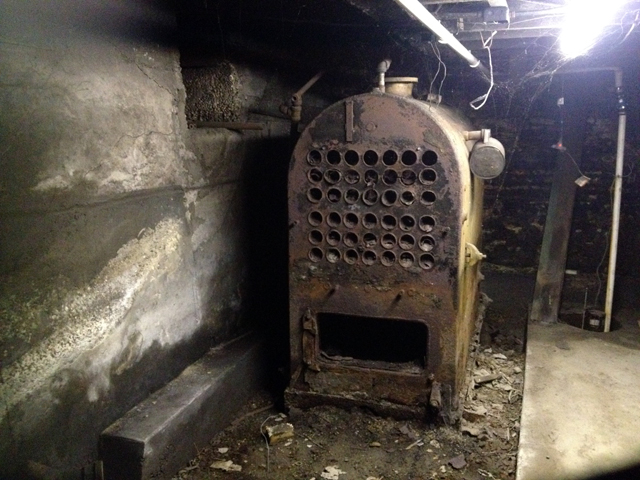 But Engine Co. No. 4 was reinstated on May 11, 1976 and sent to the far northwest side, to a new one-story brick station at 9511 W. Appleton Ave., adjacent to Timmerman Airport.

It shares that home with Ladder Truck 3.