Day one of the Eric Church Double Down concert tour at the Fiserv Forum March 29 did not have an opening act. While it was initially surprising, it was clear as the show went on why there was no opening act: Church had way too many songs to sing to share the stage with anyone else.

Day one of the Eric Church Double Down concert tour at the Fiserv Forum on March 29 did not have an opening act. While it was initially surprising, it was clear as the show went on why there was no opener: Church just had way too many songs in store to share the stage with anyone else.

And I am super glad Church didn’t share: He put on a terrific show and didn’t show signs of fatigue at any point. Maybe he was hiding his tired eyes behind the sunglasses he wore almost the whole concert. But still, this man deserves a gold medal for his endurance.

With a set list 31 songs deep and a ton of acoustic encore tunes closing out the night, the concert lasted about three and a half hours – the longest act I’ve seen performed at a concert. It’s left me wondering how Church had the energy for all that. There was a 20-minute intermission halfway through the show, which probably helped him regain his speed, but still, I was praying for his vocal chords by the end of it.

And to think he’s doing this all over again for day two of his tour stop in Milwaukee is amazing.

It was the right move to start off with "Desperate Man" and "Mr. Misunderstood;" those songs could’ve been number one and two right at the beginning. They would’ve served as great openers and would’ve gotten the crowd going from the start – although the Forum’s lights did add some energy as well. Throughout the show, there were red and blue spotlights that gave off an effect that the building was pulsing back and forth, as well as white strobe spotlights. The giant screens above the artists on stage seemed almost holographic, which was a cool effect. During "Pledge Allegiance To The Hag," the screens showed black and white photos of some country legends such as Willie Nelson and Johnny Cash – a nice throwback during a song saluting country music.

Church, of course, did not do all the work himself; his band was impressive. When he needed a partner for a song, he had Joanna Cotten back him up. And she wasn’t shy. During "Creepin’," she and Church were literally screaming into the microphones, bringing lots of wild energy to the song. I was happy that she got her own cover to herself as well; "Piece Of My Heart" was all her. 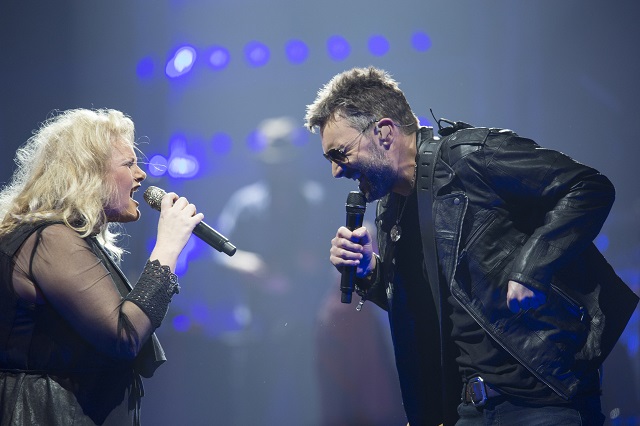 Craig Wright, on drums, sat on a fancy set for the show, rotating in a circle for a few songs and drawing a focus to the rhythms.

My favorite part of the concert was when Church sang "Record Year" and suddenly a bunch of vinyl popped up, held by hopeful audience members who waved them in the air, asking for a signature. Church held up a select few albums next to his face, waited for applause and then signed them. It was a good way to see how accomplished Church is and how many albums he actually has out. 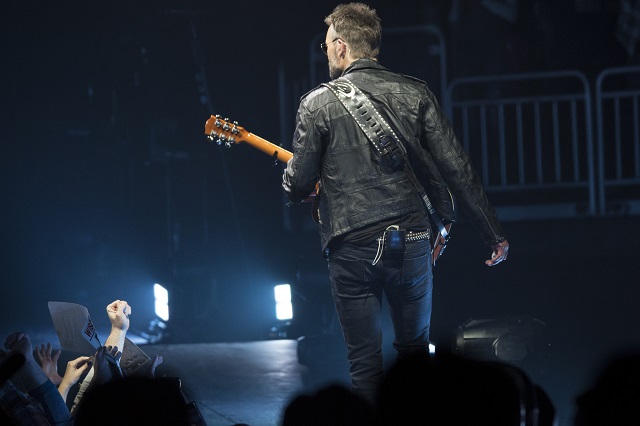 "These Boots" had audience members taking off their boots and waving them in the air, but no signatures this time. Those who didn’t wear boots to the concert just wove their hands in excitement or, like the man a few rows in front of me, waved his Nike running shoe. Which is practically the same thing, right?

I think Church had just the right amount of covers, which he mostly played towards the end of the concert. And he played a heck of a lot of his own songs as well. But he could’ve done a better job mixing up his well-known songs with his lesser known songs. At points in the concert, I was standing there thinking about how I didn’t know the last three songs he played in a row. And on a personal note, I wish he had played "Kill A Word," which is one of my favorite songs by him.

At the end of the concert – but before the encore portion – I was definitely expecting to hear "Springsteen," so I was ecstatic that he played that song with his full band as the first encore tune. However, the acoustic covers dragged on at the end, and he could’ve performed less of them – or performed a few of them as the first encores and then ended with "Springsteen" as a full band. The encores ended near midnight, and we were ready to go home.

Overall, though, it was a great time country rocking with one of my favorite artists – and any self-respecting country fan should definitely see Church again when he’s back in town.