When a restaurant has been around for over 100 years, there are bound to be myriad stories within its walls. And that was certainly the case for Karl Ratzsch, one of Milwaukee's oldest and most iconic restaurants.

When a restaurant has been around for over 100 years, there are bound to be myriad stories within its walls. And that was certainly the case for Karl Ratzsch, one of Milwaukee’s oldest and most iconic restaurants.

The news that the restaurant has closed is surely a blow to the generations of Milwaukeeans who have enjoyed meals at the restaurant over the years. It was, after all, a living, breathing testament to the influence of Milwaukee's German immigrants. It was also home of many, many memories.

The restaurant was established by Otto Hermann, who opened Hermann's Cafe on East Water Street in 1904. His stepdaughter Helen joined him from Germany a few years later, assisting him in operating the cafe. Among others to work there was Karl August Ratzsch, who came to Milwaukee on a military tour of the U.S.

After a ten-year courtship, Helen married Ratzsch, and together they purchased the cafe. When development forced them to close the Water Street location, they moved the restaurant to 320 E. Mason St. in 1929. They operated it as the Old Heidelberg Cafe for a number of years before renaming it Karl Ratzsch.

An attention to detail, service and quality allowed the restaurant to flourish, even through the leanest of years. In 1962, their son Karl Jr. took over operations, carrying on the restaurant’s successful tradition, which included a variety of awards and honors including accolades from "Travel/Holiday Magazine."

From there, the restaurant was passed along to Josef Ratzsch in 1996 and subsequently sold to managers Judy Hazard, John Poulos and Tom Andera, who operated the restaurant until 2016, when the restaurant was sold to Chef Thomas Hauck. Hauck, in turn, put his heart and soul into reviving the restaurant, applying modern technique to the classic menu, and creating a place that he hoped would endure for generations to come.

We were fortunate to have spent time in recent months with Chef and owner Thomas Hauck and General Manager Jane Bruskiewitz, with whom we sifted through some of the restaurant's photographs and historical paraphernalia. The things we discovered would take an entire book to unpack. However, here’s a sampling of some of the fun historical facts, legends and tall tales that caught our eye.

The birth of big ideas 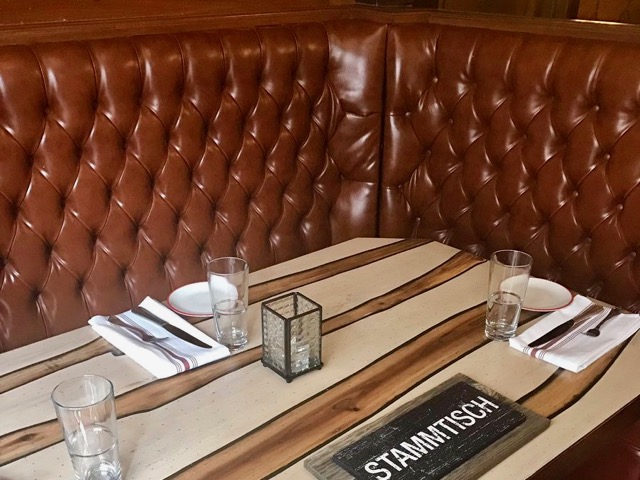 They say good things happen when folks enjoy food and drink together. At Karl Ratzsch, that seemed to ring true. As the story goes, the idea for Summerfest was crafted by Mayor Maier and friends in the booth on the southeastern corner of the bar. And we're pretty sure that wasn't the only big idea to get its start behind those doors.

Not all historical moments are rosy. In June of 1937, a tragic accident befell Karl Ratzsch. Pastry Chef Katherine Hermann, widow of the original owner Otto Hermann, was fatally burned by an explosion in the restaurant’s gas oven. The explosion, which blew the door off of the oven, also destroyed one end of the kitchen.

"The explosion tore the door off the stove oven and hurled it 20 feet against a wall," reads an article by the Milwaukee Journal from June 9, 1937. "A piece of metal punctured a nearby coffee urn. A cash register used for tabulating customers’ checks was wrecked and a table was littered with debris." 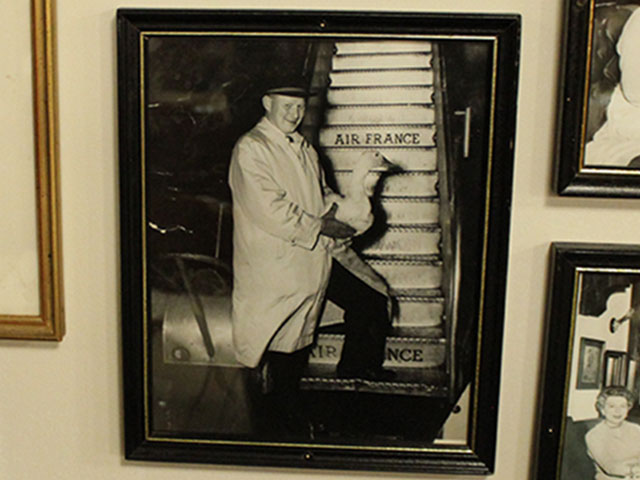 In 1957, the restaurant hosted a lavish feast at the behest of Arthur Fiedler, an internationally known gourmet and conductor of the Boston Pops who was in town for a series of concerts. The dinner, estimated to cost $1,000, was presented as a reward for Mrs. Robert Christiansen of Fox Point, who had singlehandedly sold the most tickets for Fiedler’s concerts.

The menu for the dinner showcased a variety of delicacies from around the world, including iced Russian vodka from East Berlin and Strassburg pate de foie gras. There was also fresh Beluga caviar from Turkey (at the time, it couldn’t be obtained from Russia), Chesapeake Bay oysters and a puree of Chukker Partridge Indiene flown to America from India.

Pineapples were flown in from the Hawaiian islands to create Cherries Jubilee a la Hawaii. And five pounds of Brazilian coffee were roasted in Rio de Janeiro and flown to Milwaukee the same day. A Strassburg goose was also to be flown (live) to Milwaukee. However, when customs prohibited the entry of the live goose into the country, Ratzsch sought out the assistance of the French Embassy, who assisted him in obtaining a waiver under "emergency conditions" from the U.S. Agricultural Department. He then flew to Europe and brought back the goose by hand. 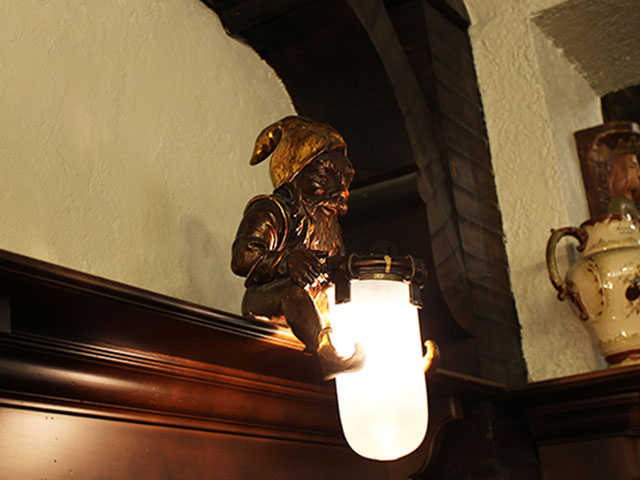 If you noticed the carved figures sitting astride the cuckoo clock in the main dining room, you’ve met the heinzelmaennchen, a race of house gnomes with origins in Cologne, Germany.

As the story, first penned in 1826 by writer Ernst Weyden goes, when the hinzelmennchen arrived, the people of Cologne had things easy.

Bakers needed no employees. Tailors had no need for apprentices. And homes needed no housekeeping. For the heinzelmaennchen spent the wee hours every night baking bread, washing floors and doing a variety of other tasks for the citizens. Eventually, the locals stopped working altogether. They lived a life of leisure, knowing their work would be done while they slept.

And this continued until a tailor’s wife became so curious about the creatures that she scattered peas on the floor of her home in the hopes they might slip and fall during the night so that she could catch them in action. Infuriated by the trick, the gnomes disappeared forever, leaving the lazy citizens to do their city’s work by themselves.

To this day, a famous saying in Köln is: "this must have been done by the heinzelmaennchen," referring to any job that's completed quickly, or with little effort. 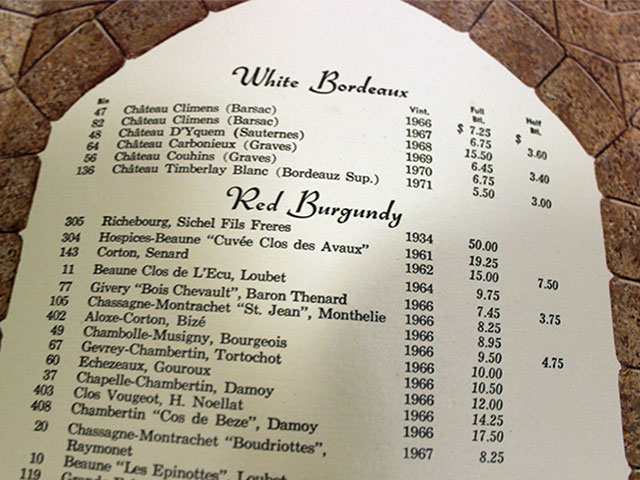 Karl Ratzsch and his wife, Helen, made frequent trips to Germany where they purchased a variety of glassware, beer steins ... and wine. To facilitate, they shipped their Cadillac overseas and filled it up with their finds before shipping it back home.

Needless to say, their wine list – which contained an extensive collection of European wines, including Bordeaux and Burgundies – gained notoriety across the nation.

Of course, they needed a place to keep all that wine. So, Karl Ratzsch Jr. dug his own cellar. Interestingly, it was located under the sidewalk of the restaurant, extending from the restaurant’s front door to the corner of Milwaukee and Mason Streets. And it wasn't exactly legal.

"He just dug away under Mason Street to create a natural wine cave," notes Hauck. "In the 60s, the city came to do some work and they found the wine cave and cinder-blocked and boarded it up."

Sometimes the restaurant had a bit too much of it. During prohibition, the bar at the Old Heidelberg (the original name for the restaurant at 320 E. Mason St.), was also the site of at least one police raid. On a Sunday evening in 1931, prohibition agents arrested Charles Storm, a head waiter at the restaurant, and confiscated four and a half quarts of wine, 12 bottles of beer, a pint of whiskey and half a pint of vermouth. Karl Ratzsch was not found on premise. But he was charged with the possession and sale of liquor, and there was a warrant put out for his arrest.

An article documenting the raid was published in the April 13, 1931 edition of the Milwaukee Sentinel, which read: "The restaurant is patterned after student resorts of the German university city, one of its decorative features being a display of hundreds of ornate beer steins. And occasionally, prohibition agents charge, those steins held real beer." 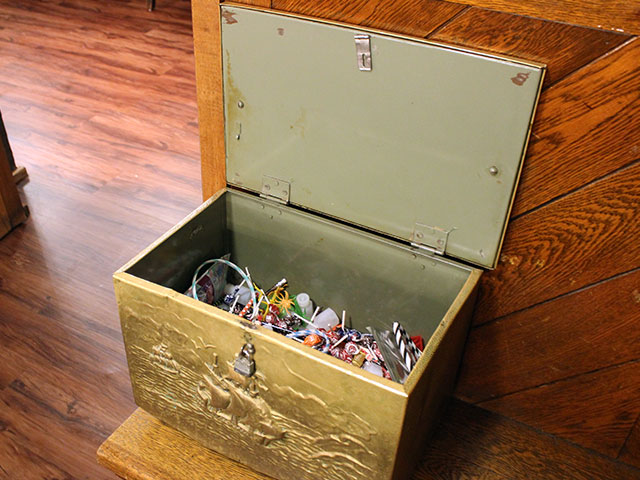 It’s been a longtime tradition at Karl Ratzsch to bestow well-behaved children with small gifts after their meals. The gifts – usually small toys or candy – were held safely in a chest near the door, and administered after dinner.

Chef Hauck bore fond memories of the tradition. His parents, he says, would always bring a toy back home from the toy-chest at Karl Ratzsch on Symphony Night. It's part of the reason he kept the tradition alive when he took over the restaurant. 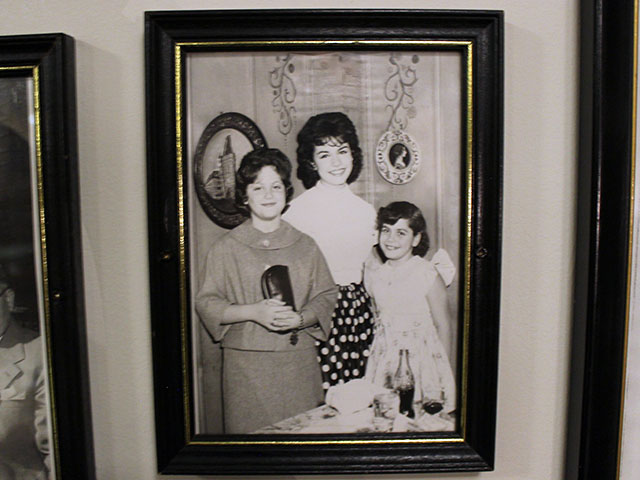 When it came to popular spots, Karl Ratzsch was THE place to be in Milwaukee. Every politician, every major act that came through the city in the 1950s and 60s, was nearly certain to make stops at Karl Ratzsch, Mader’s and Frenchy’s. Among stand-outs are names like Jack and Jackie Kennedy, Jack Dempsey, Duncan Renaldo (AKA The Cisco Kid), Senator Joe McCarthy, and Liberace, who signed the guest book with a flourish.

The upstairs dining room was a treasure trove of photographs of additional celebrity visitors including this shot of Annette Funicello of "Mickey Mouse Club" and "Beach Party" fame.

At some point during the 1950s, as competition mounted among restaurants, the owners of fine dining restaurants John Ernst, Mader’s, Frenchy’s and Karl Ratzsch reportedly entered into a pact of sorts. The agreement was that none of the restaurants would charge less than $3 for an entree.

Of course, Ratzsch’s had its own interesting policies on pricing. As the story goes, whenever the restaurant got crowded, they’d raise the prices on the menu. And when the crowd thinned out again, they’d take the prices back down. 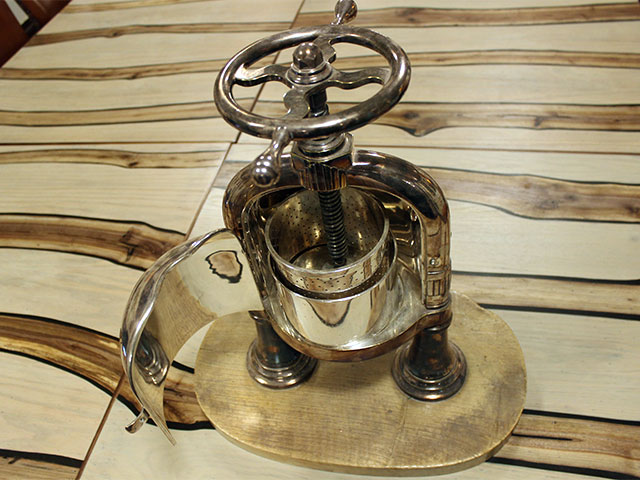 Among the culinary objects at Karl Ratzsch was a pristine duck press, a classic culinary tool that, to some, might resemble a medieval torture device. It was used, largely in the 1970s to extract the flavorful juices from a roasted duck carcass in order to create an accompanying finishing sauce.

The renowned Parisian restaurant La Tour D’Argent, once possessed multiple duck presses, one of which went up for auction in 2016 and was expected to fetch an estimated price of 4,000 - 6,000 euros.

As the story goes, a friend of Paul Newman’s once tried to purchase the press while dining at Karl Ratzsch. His offer? $1,000 on the spot.

A similar press was purchased – for an undisclosed price – by Chef Anthony Bourdain in Paris during an episode of "The Layover."

To see the press in action, see this video from "The Guardian" filmed at La Tour D'Argent.

There is no single article, no list of historic facts, no number of photographs that can pay adequate homage to a restaurant which has played such a prominent role in the history of Milwaukee dining.

However, the countless treasured memories – the family celebrations, the landmark milestones celebrated within its dining room, and the convivial experiences its chefs and staff provided to countless diners over the years – will endure.

R.I.P. Karl Ratzsch. You may be gone. But, you'll not be soon forgotten.