Fresh Farm Bowls Truck takes to the streets in April

A new food truck will be serving internationally inspired dishes for breakfast, lunch and dinner with a focus on local flavors.

A brand new food truck will celebrate its grand opening on April 28 from 8 to 10 a.m. at the U.S. Bank Building. And it will serve breakfast.

The Fresh Farm Bowls truck, which specializes in internationally inspired fare with a farm-to-fork twist, will debut its breakfast churro bowl ($4.49) along with traditional pasties filled with breakfast ingredients like eggs, sausage and vegetables ($4.49), as well as buttery croissants, scones and coffee from Stone Creek Coffee.

"I really wanted to do something different," says Jonute Svien, owner of Fresh Farm Bowls. "A lot of people love breakfast, but they don’t take time to eat it. So, the goal was to give people an alternative to donuts or stopping at McDonald’s."

The truck will also serve lunch and dinner, offering a wide assortment of bowls ($6.49 each) including an Asian-inspired chicken, chipotle pork, a Middle Eastern bowl featuring falafel and hummus, and tofu and field roast bowls for vegetarians. Pasties containing similar flavors will also be served, along with soup and beverages. 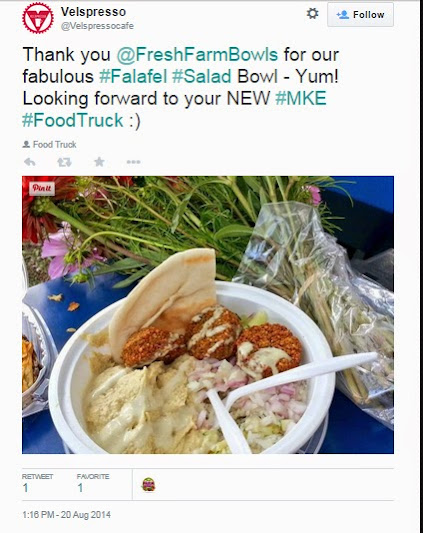 Svien says food has always been an integral part of his life.

"I was born in Romania and adopted by a family in Milwaukee when I was three," he says. "I always loved food, maybe because there was so little at the orphanage. My mother, who is from Mexico City is a great cook, and my parents really encouraged me."

In middle school, they signed him up for his first cooking classes, and supported him as he began to show even more of an interest in the food industry while attending high school in Whitefish Bay.

"When I told my high school counselor that I wanted to pursue a career in cooking, there was a lot of support. I started hosting luncheons for the teachers, and when I wanted to do even more, they signed me up for a program where I could attend MATC part time during my last year in school."

Svien took a job planting and harvesting fresh vegetables at Springdale Farm in Plymouth,  for two summers, where he made a more intimate connection to the land and refined his appreciation for fresh food.

When he graduated from high school and earned an Associate’s degree from MATC, Svien went on to earn a culinary degree at Le Cordon Bleu in Chicago. While in Chicago, he staged at a variety of restaurants including The Signature Room in the John Hancock Center, Naha, and Everest.  When he graduated, he opened the Drunken Pig in Chicago as its sous chef.

"After about 10 months of working at the Drunken Pig, I started looking at ways to move closer to home," says Svien. "My brother recommended I get a job at The Bay, which was opening in Whitefish Bay.  And there, I really got to know the management of the business."

Svien hails from a family of entrepreneurs; both his father and brother own their own businesses. So, he opted to follow in their footsteps.

"At first I thought I’d open a small café," says Svien. "But, ultimately, I decided that the best option was to start small."

Svien spent a month in New Orleans, staying with a relative of the Seely’s who own Springdale farm, where he researched the food truck scene, talking to operators and learning more about the regulations and best practices for trucks.

Svien decided he wanted to launch a truck that focused on farm-fresh meals with an international flare. His plan was to source ingredients from local farms and vendors, including Springdale Farm and Outpost Natural Foods.

"When I came home, I started working on a business plan," Svien explains. "I hired a consultant, Andy Garrison, to assist me in making sure that I was on track with the flavor profiles of the food I wanted to serve, and we spent two months testing recipes and taste testing, narrowing down what we’d serve."

Svien wanted to make sure there was a solid market for the food he was planning to serve, so he spent last summer hosting pop-ups at the Westown Farmer’s Market. As the rave reviews started flowing, Svien will also pitch his idea to Fund Milwaukee later this month, hoping to receive $15,000 in start-up funds through multiple local investors.

Starting in May, Farm Fresh Bowls will offer breakfast at college campuses – including MATC, UWM and Marquette University – and hospitals, including St. Mary’s and Aurora.  They will also serve lunch on Mondays at the U.S. Bank Building, Tuesdays at Schlitz Park, and at a variety of other locations throughout the summer.

The goal will be to offer a core of seasonal staples, as well as a special bowl which changes monthly.

"Food is a passion I want to share with others," Svien notes. "It’s exciting to see that so many people are interested and supportive.

Take-Out Tuesdays are back at Schlitz Park

New Gavilán food truck prepares for landing at The Mothership