Take a peek: The new Fairgrounds Coffee + Tea is whimsical... and personal

Fairgrounds Coffee & Tea will open its doors to the public, debuting its first Wisconsin cafe at at 916 E. State St., on Wednesday, Oct. 23 at 6:30 a.m. And we've got a sneak peek at what you can expect.

The new venue, which boasts a coffee program featuring roasters from around the nation, a robust tea program in collaboration with Rishi Tea, and a chef-driven menu of breakfast and lunch items, occupies the retail space on the Eastern end of the new Vantage on the Park Apartments. It’s a location that formerly held Aura restaurant and (more recently) Durbar Restaurant & Lounge.

But you’d never know it, based on a fresh look at the space, which has been utterly transformed into a bright fairgrounds-themed cafe. 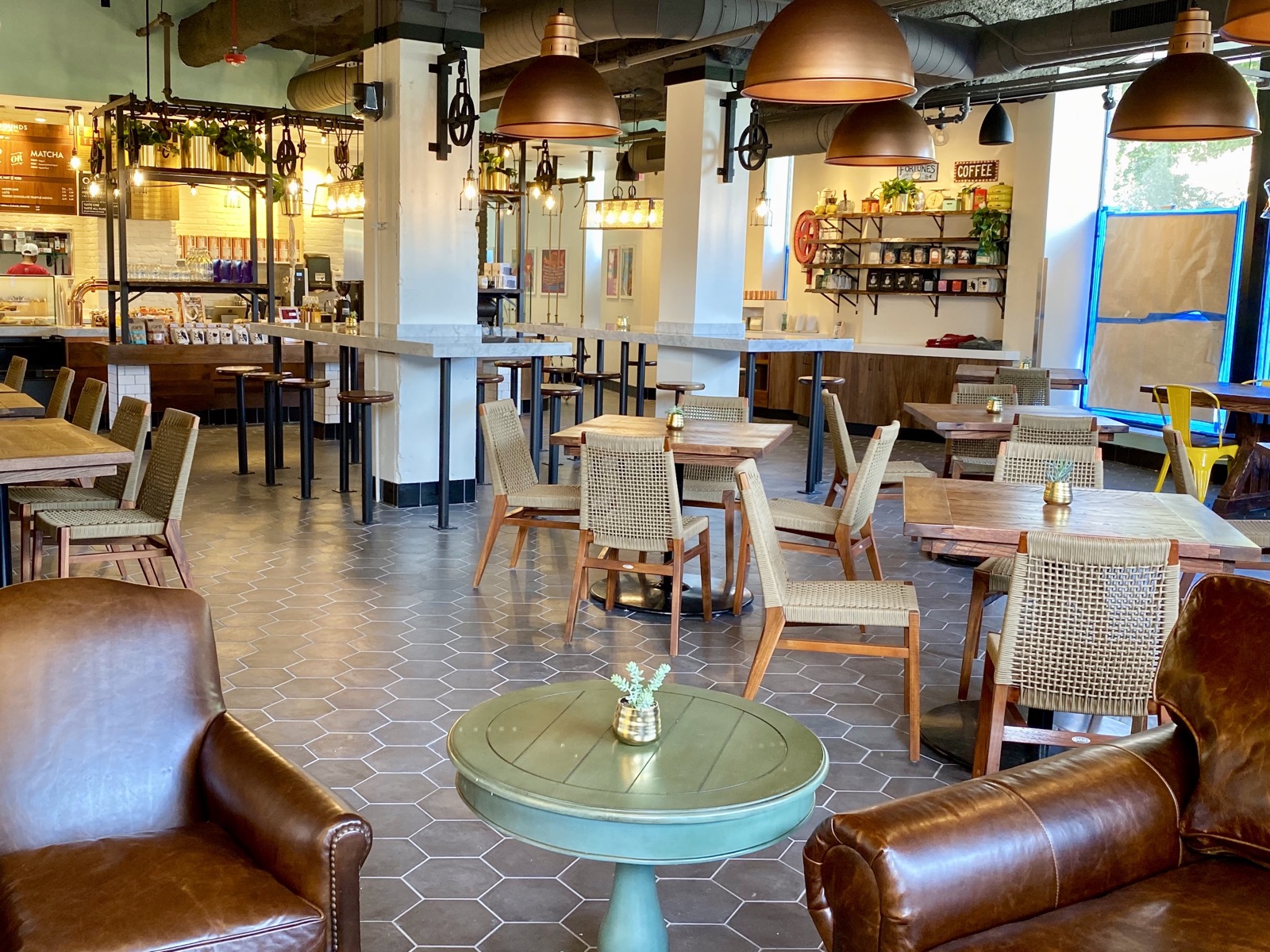 "We went through at least 15 floor plans for this cafe," says Fairgrounds CEO Michael Schultz. "When I look at a space, I’m paying attention to the energy, how light hits the space. I also want to pay homage to the building. All of those things have an impact on the guest experience."

Fairgrounds was founded on the premise that magic and excitement are born of choice and that variety lends itself to the guest experience. And variety is exactly what you’ll find – in everything from the clever Chemex lighting fixtures to the seating options. 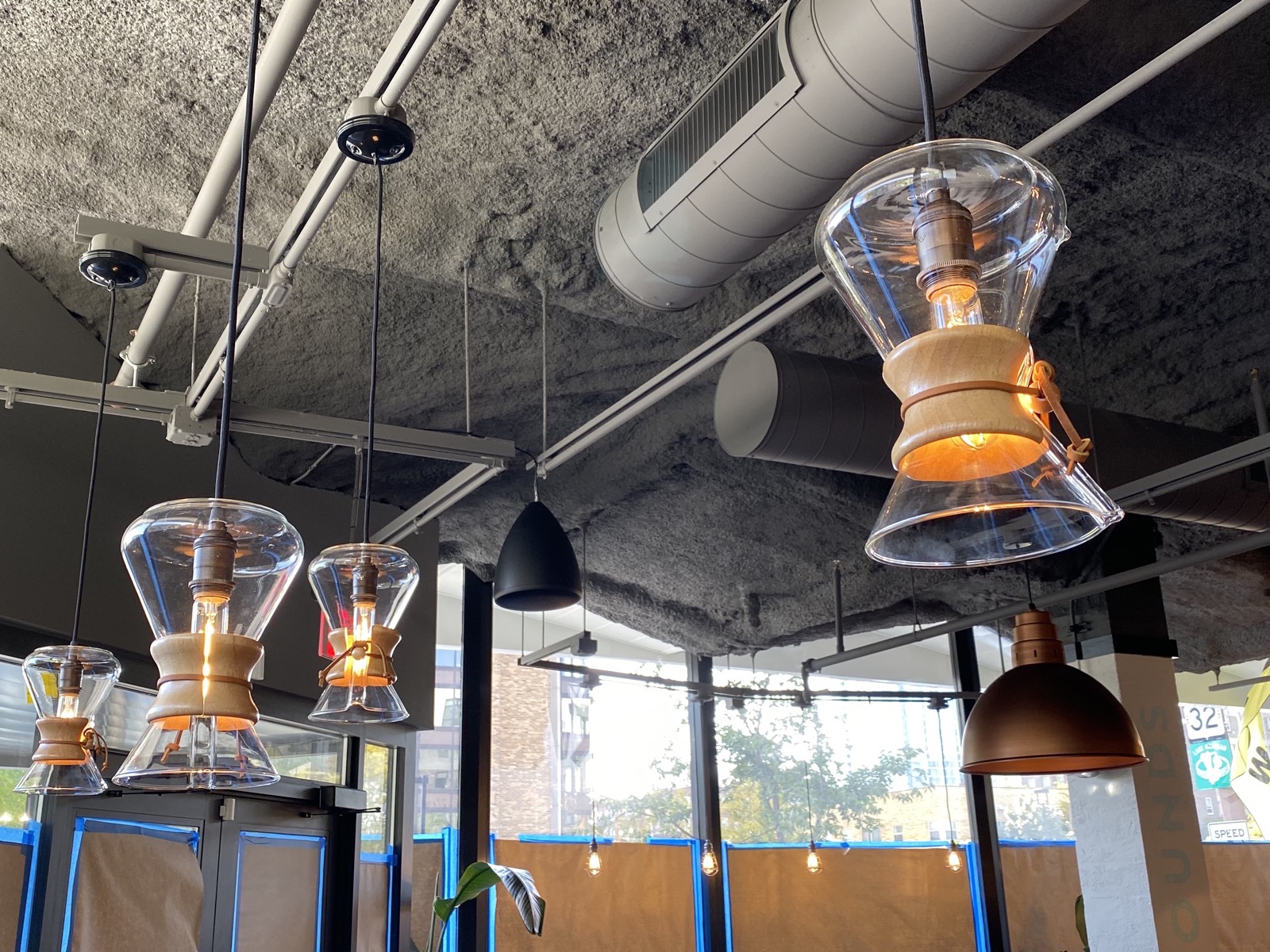 Seating is available in a variety of forms, from traditional four-top tables to communal tables perfect for groups.

There’s a lounge with "fanny tested" soft seating, a cart style coffee table made with repurposed materials from factories in Wisconsin, and a fireplace that’s perfect for warming your toes during the winter months. 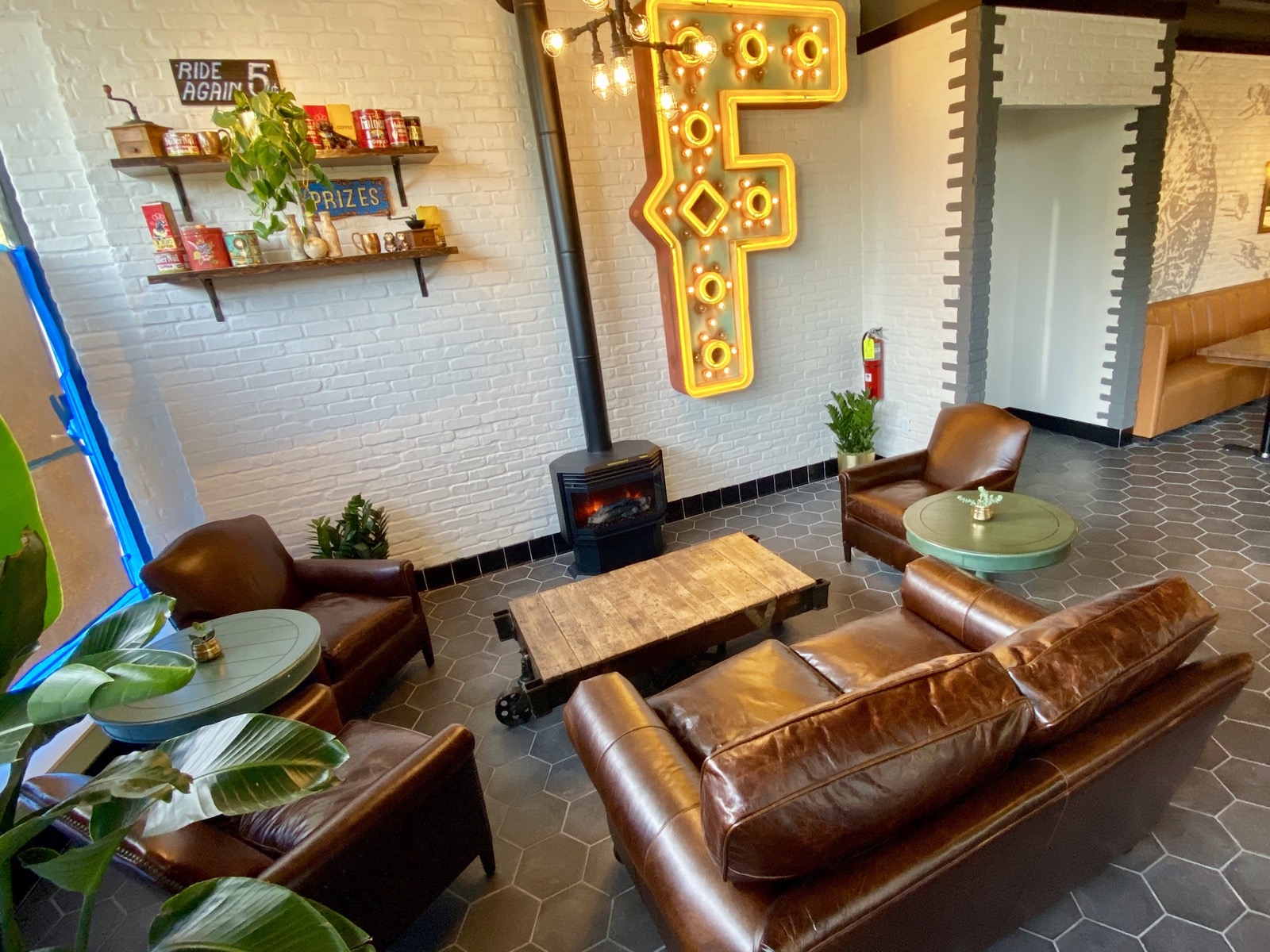 There are also cozy upholstered banquettes. 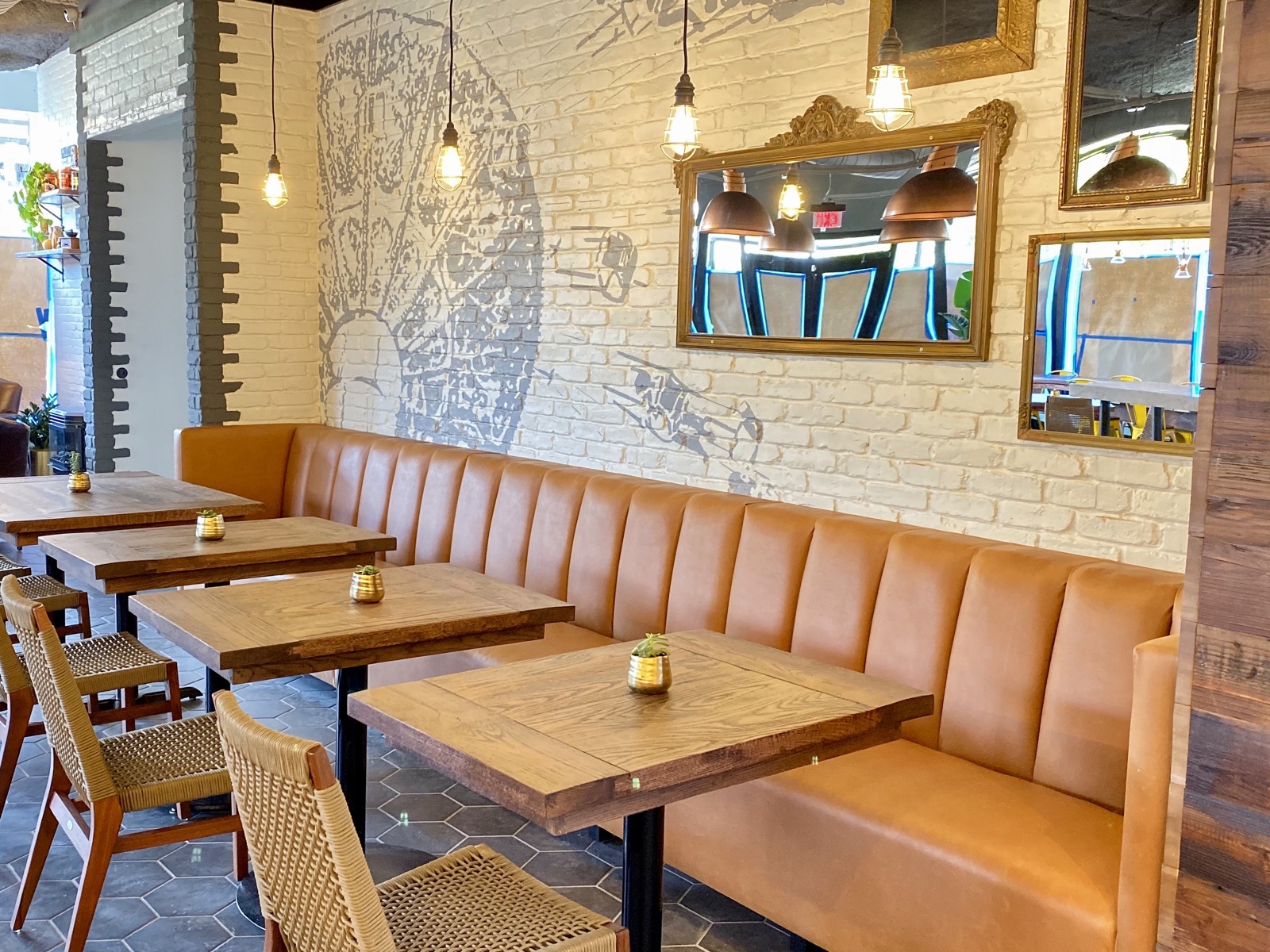 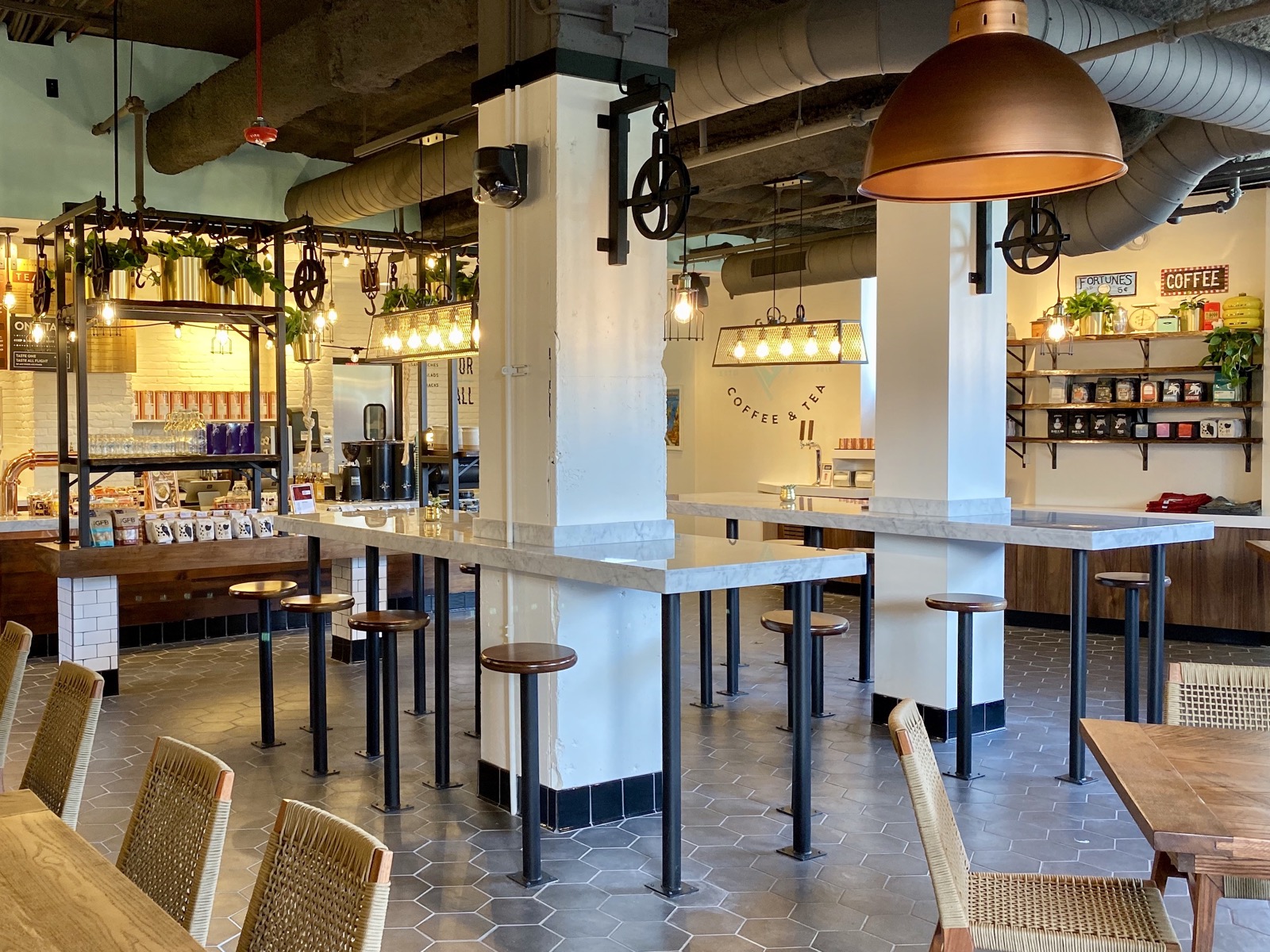 And yes, there are even wooden swings where you can sit while waiting for your pour-over. 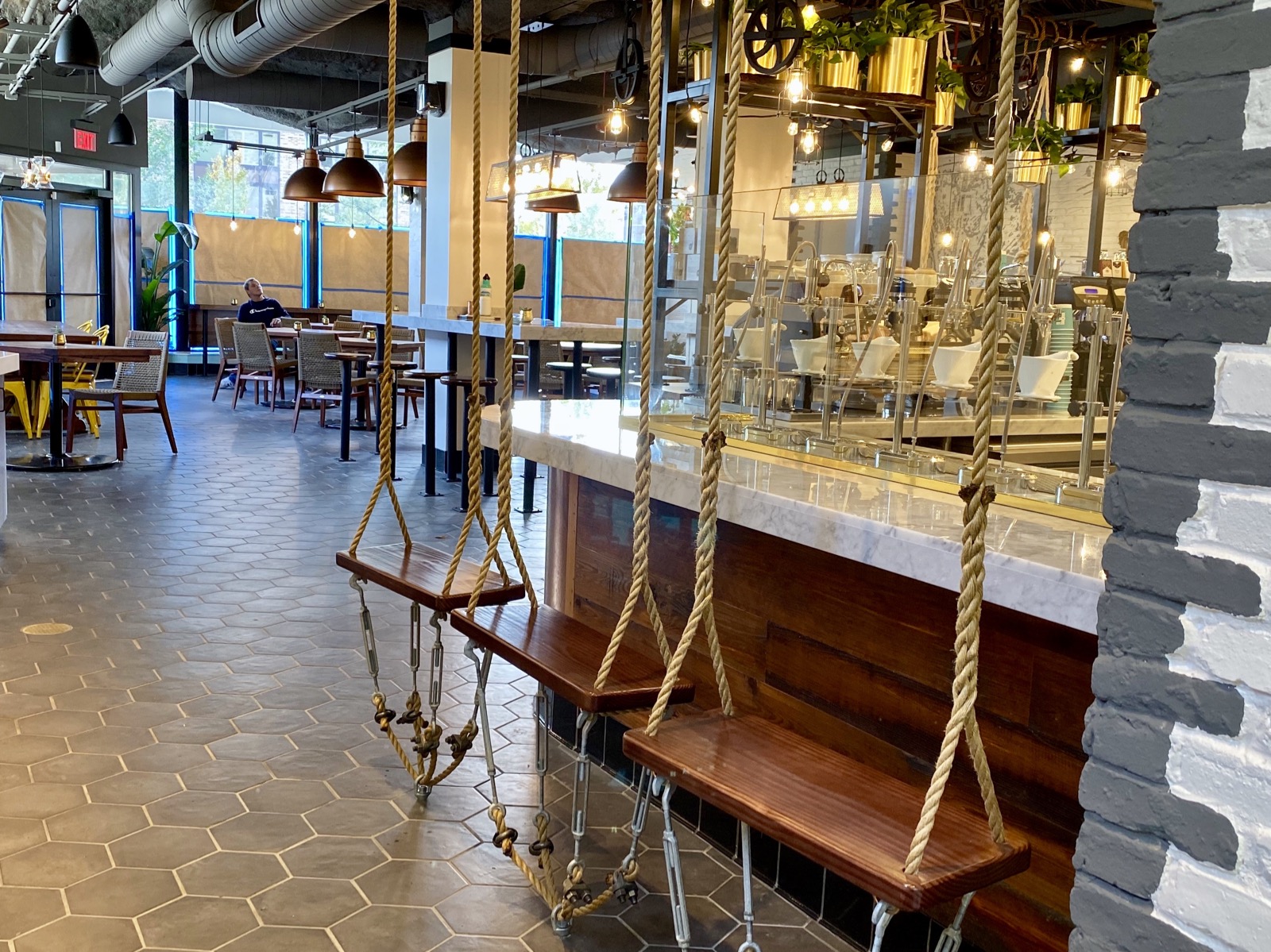 In keeping with the Fairgrounds theme, there’s also plenty of whimsical fair-focused paraphernalia, including a Fairgrounds’ hallmark: a giant "F" lit with carnival bulbs that looks as if it was repurposed from an old fair park. 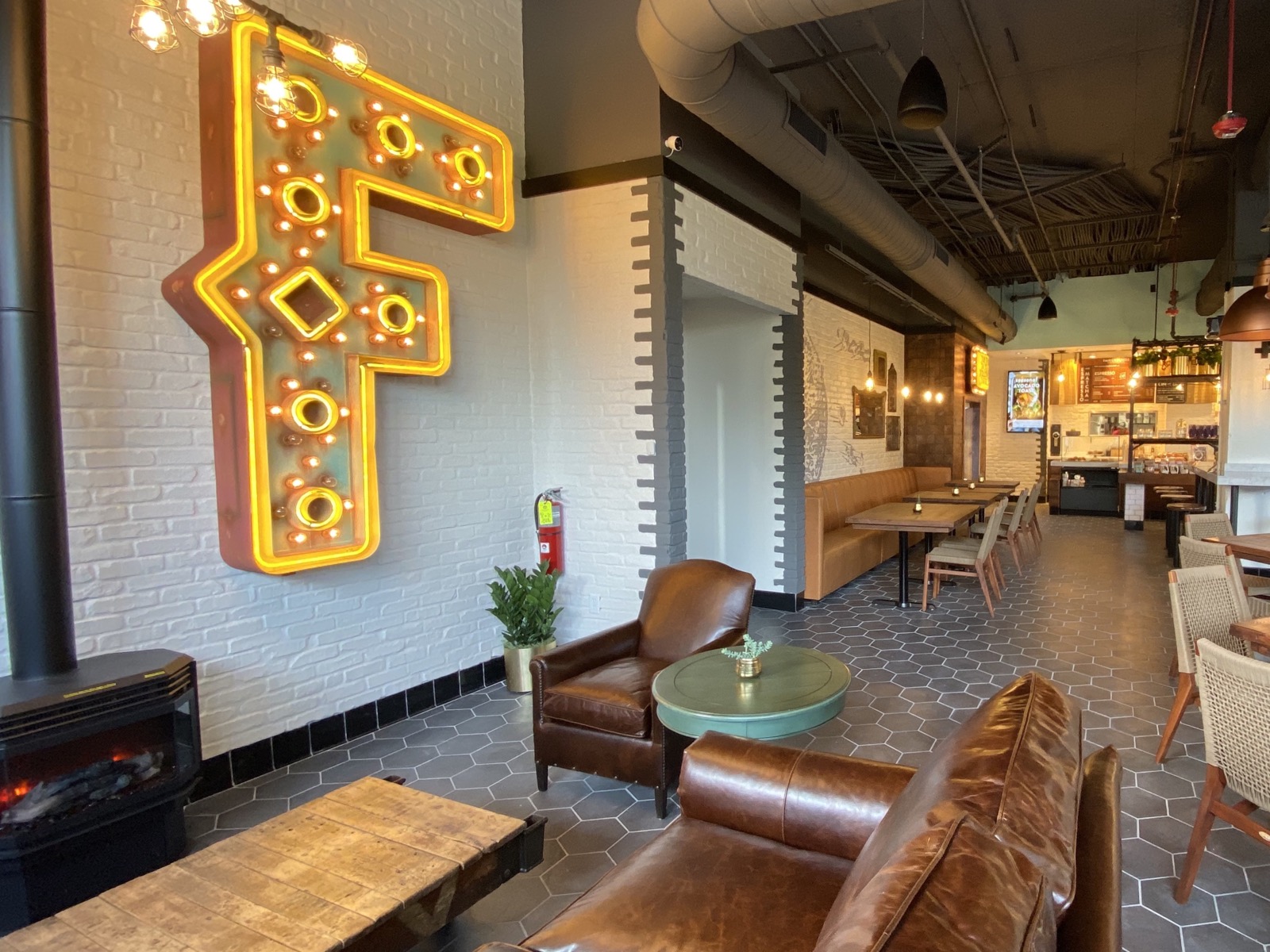 "The day we opened the first Fairgrounds in Bucktown, people were astounded," says Schultz. "‘You must have scoured the earth for this!’ they said. And I was so floored. I’d actually gone to the manufacturer to look at the item the week before, and I asked them for a bat. They looked at me so strangely, but gave me one. And I took a bat to it, busted up the fluorescent lights and we repainted the dings. And it became perfect. That’s now a tradition. All the dents and dings have a purpose."

Ultimately, says Schultz, the sign embodies what Fairgrounds stands for.

"Fairgrounds is like an old T-shirt," says Schultz. "It’s falling apart, but you love it. And you feel like it’s the most comfortable item of clothing you love. And that’s what we want Fairgrounds to be for people -- comfortable, familiar, lived in."

And that comforting vibe includes numerous personal touches that your average person wouldn’t necessarily pick up upon.

"My Grandpa Irv was my hero," says Schultz. "He was an entrepreneur. And he was the kindest man. You hear the expression: he’d give you the shirt off his back, and he did that. And he was criticized for not being a great businessman; but he cared. And I want people to see that in my work, and to come back to my kids and tell them stories about me. The reason I’m here is to make the world a bit better."

So Schultz wove Grandpa Irv into the fabric of Fairgrounds. There’s a drink called "Grandpa Irv’s Espresso Old Fashioned" on the elixir menu. It's made with espresso, walnut bitters and simple syrup and garnished with a bit of orange peel. 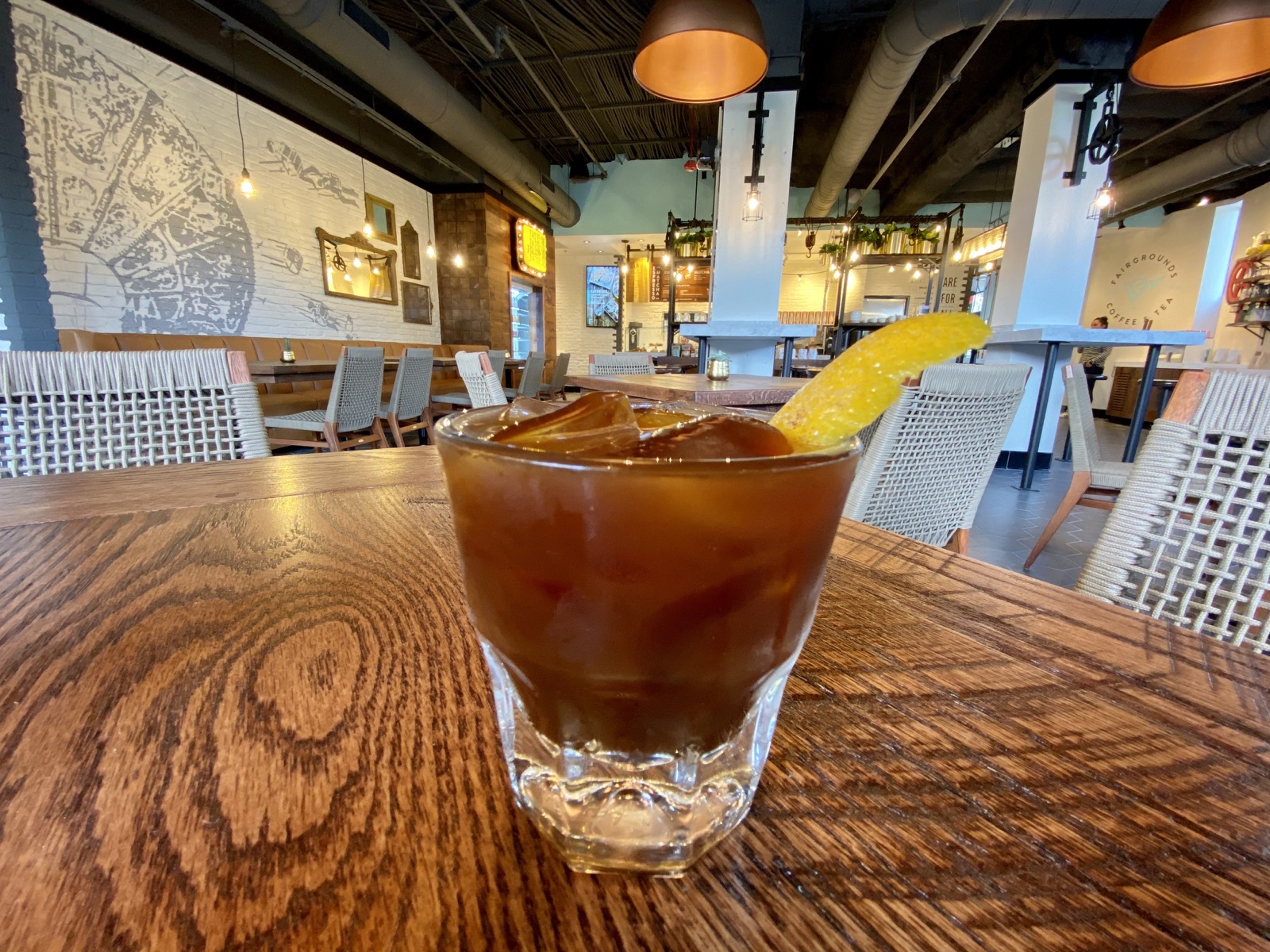 "I went to my grandmother and asked her permission to put his name on the menu,' Schultz recalls. "She replied: 'Well, he would hate that, but yes.'"

Oh – and that bright shade of blue that’s used in the Fairgrounds logo and throughout the space? It’s also inspired by Schultz’s grandfather. It’s the same color as Erv’s 1956 Thunderbird.

Schultz also created a cafe that’s child-friendly, featuring a children’s menu with options like scrambled eggs and toast, turkey sliders and PB&J roll-ups, a few of which are named for his own children.

Stop by with your kiddos and someone at the counter is also likely to hand you an Etch-a-Sketch.

"As a father of four children, it bothers me to see everyone so obsessed with technology. But you hand them one and the children are intrigued … they think it’s some kind of red iPad … and the parents get nostalgic. Ultimately, they’re interacting with one another instead of their phones."

As for beverages, there are plenty, from espresso to matcha and everything in between. If you want to try something new, opt for an elixir like the beautiful blue and green hued Flower Power Milk Tea with matcha, jasmine butterfly pea flower tea, jasmine simple syrup and a choice of whole or coconut milk. 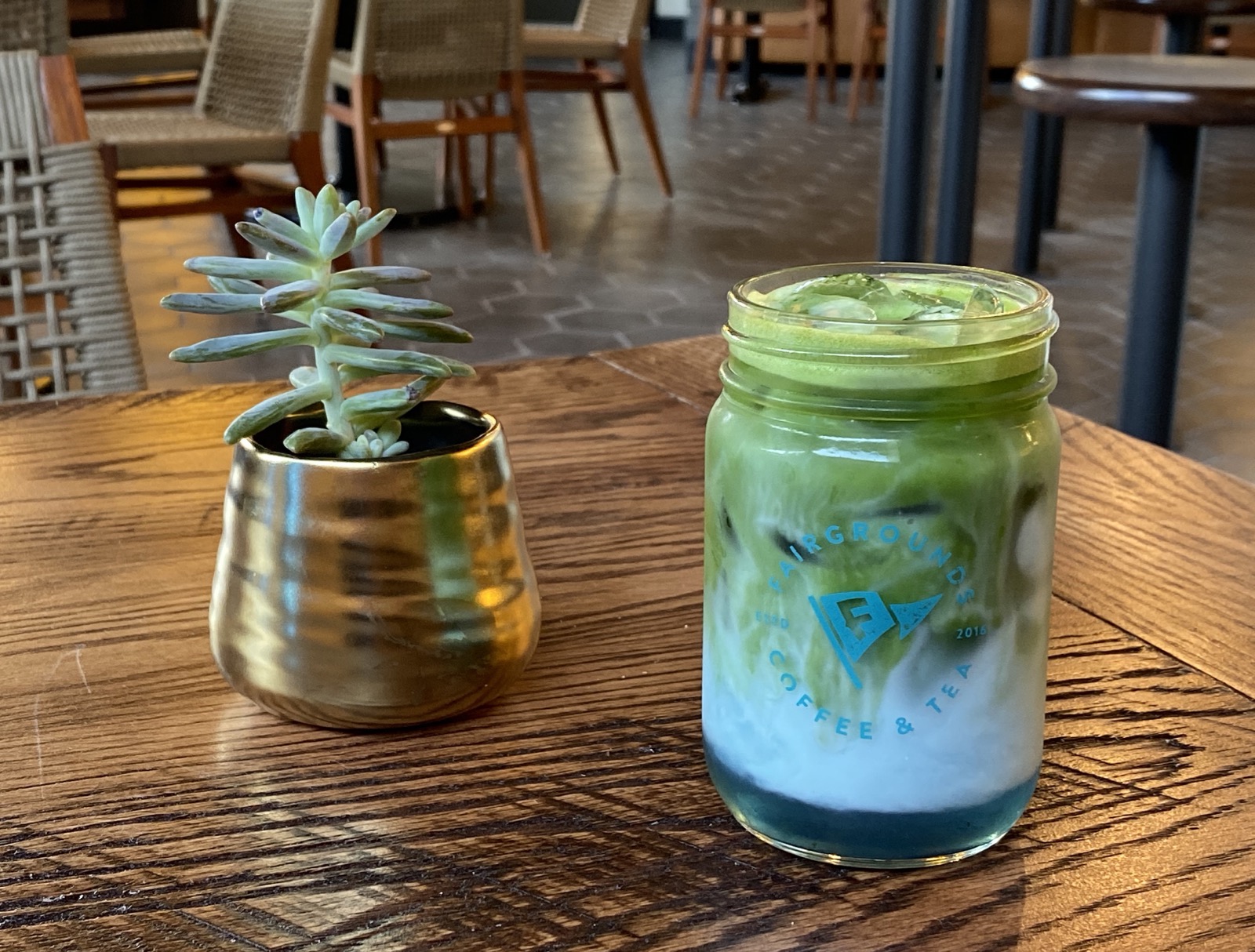 Variety plays into the food menu as well. Breakfast is served all day, with everything from a classic lox platter to a meticulously topped acai bowl. 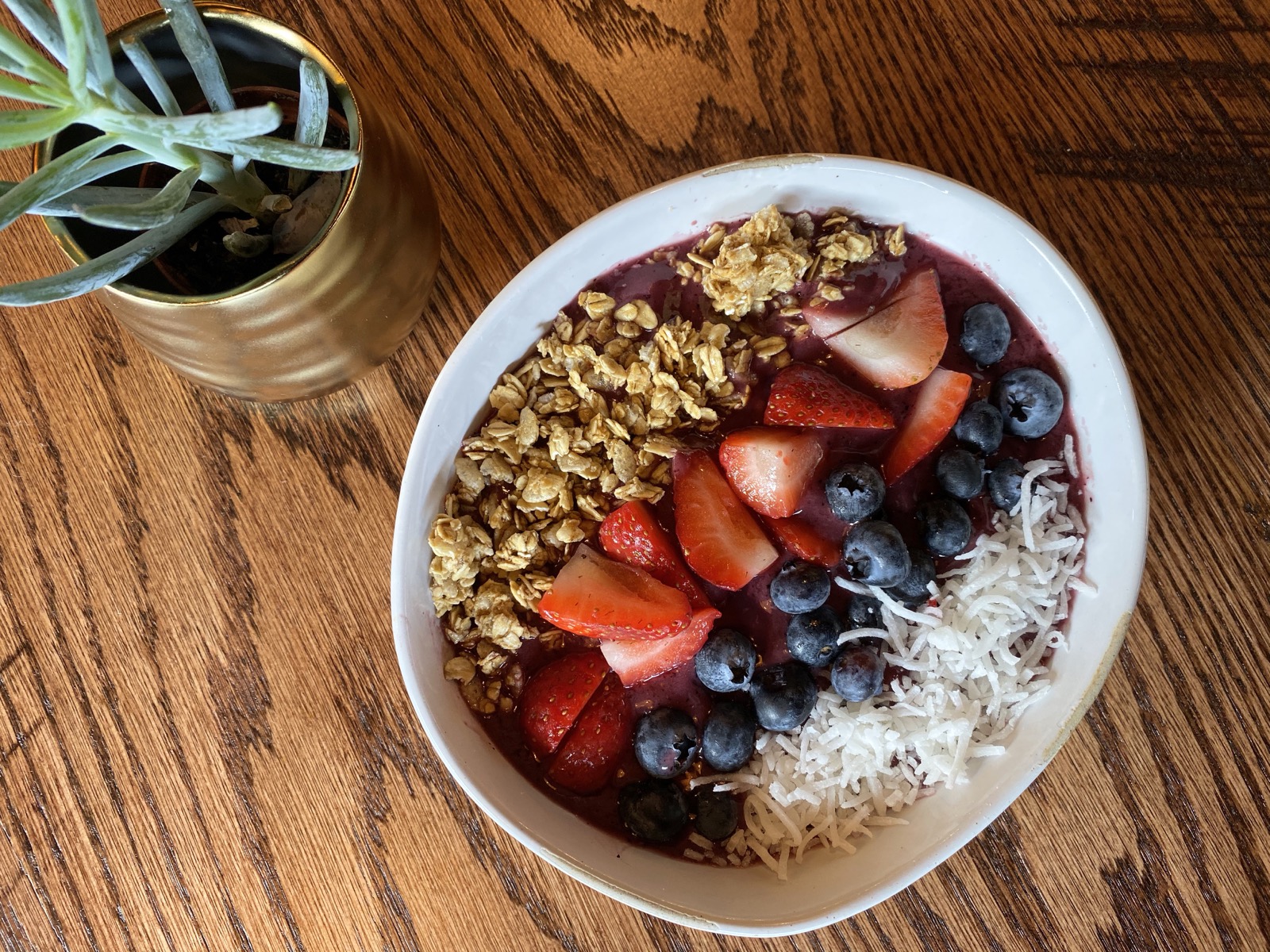 You can also get your avocado toast fix, including a beautifully prepared seasonal version which comes complete with an egg on top. 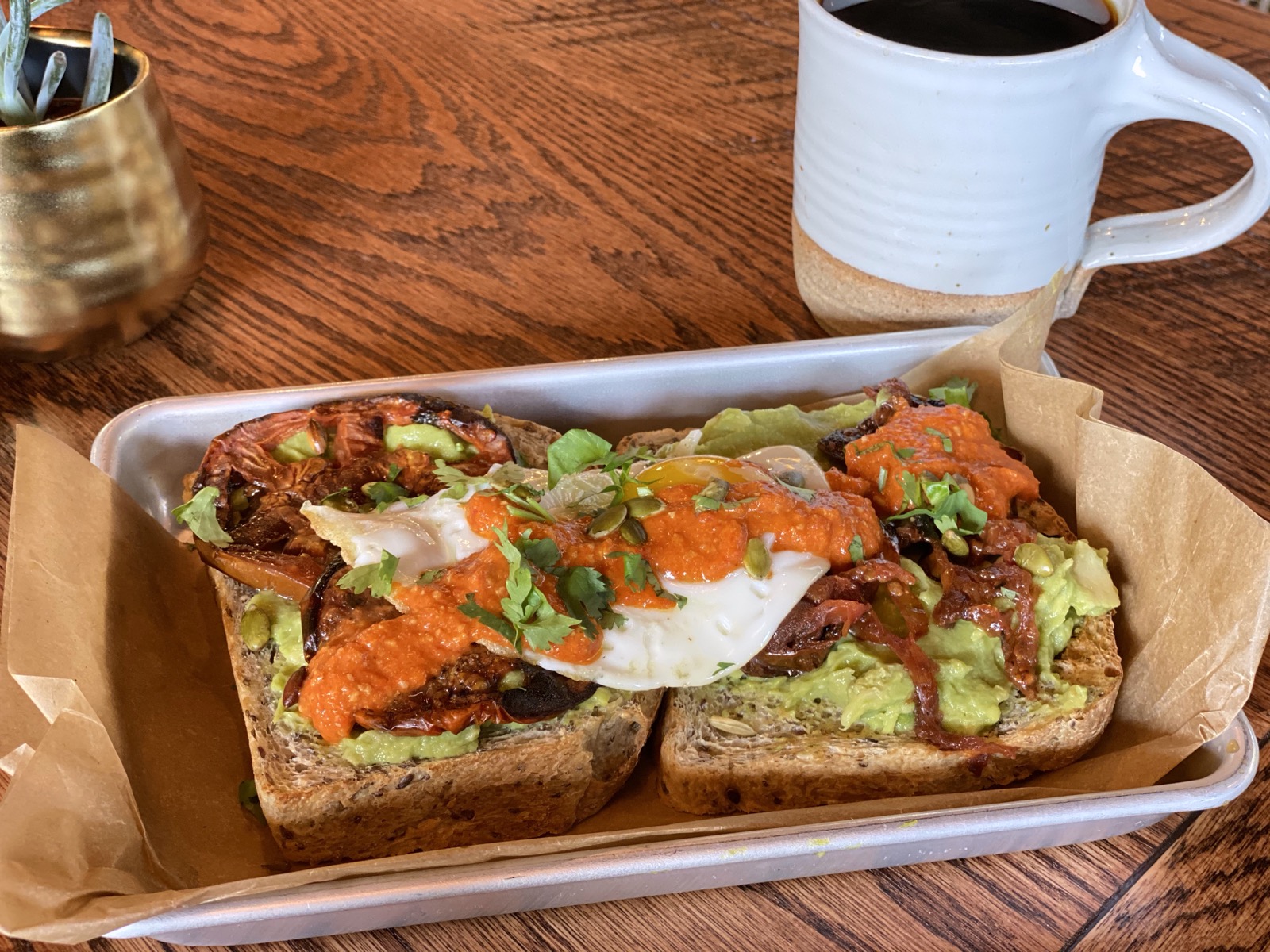 There are also a variety of sandwiches, from turkey and brie to roasted vegetable and roast beef. And don't sleep on the salads, including this gorgeous kale salad with tahini dressing. 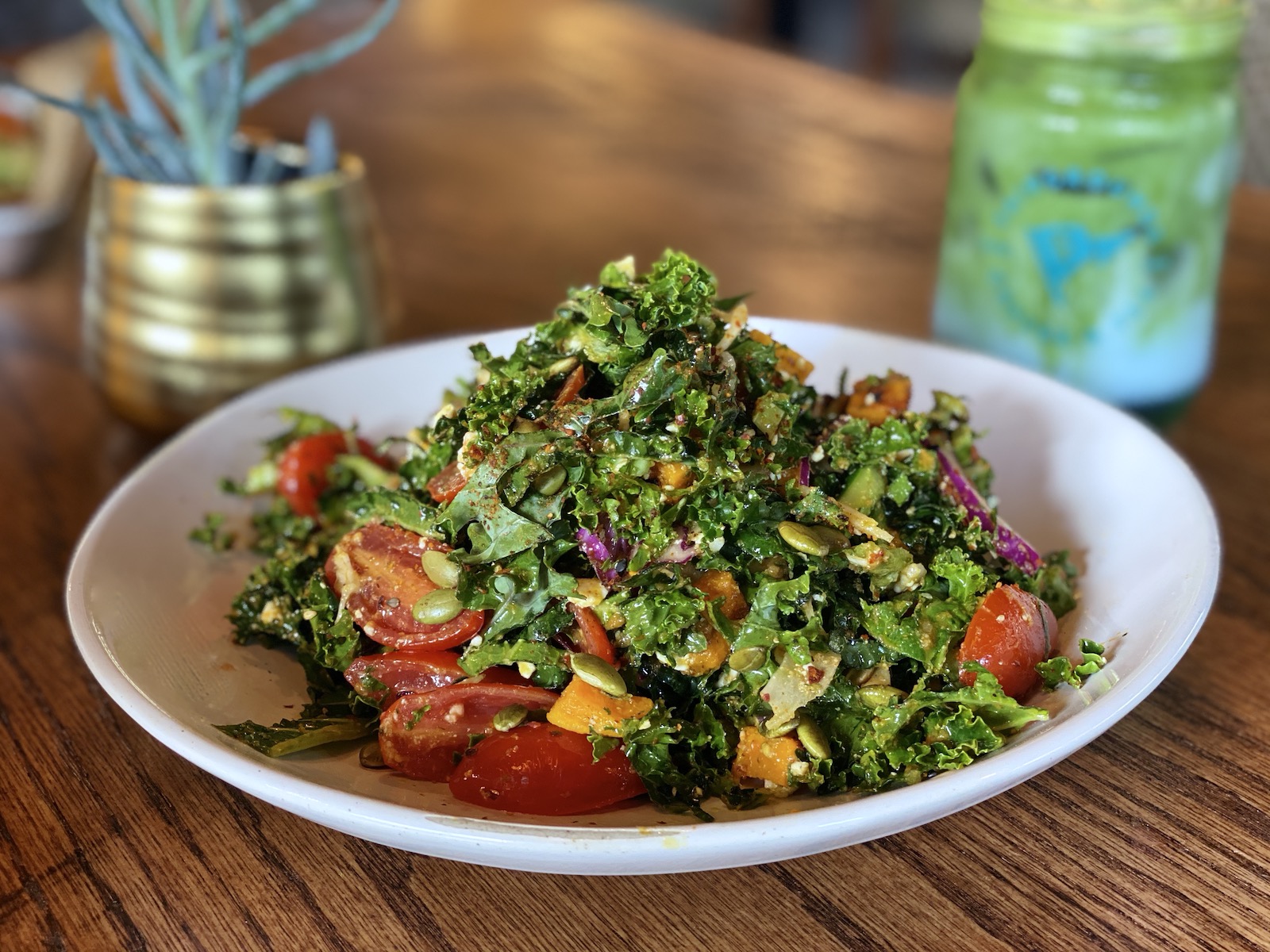 Schultz, a hospitality industry vetaran whose past work includes stints with brands Ruth’s Chris Steak House and Wolfgang Puck, says that when he launched his own company, he wanted to make a difference.

"I came from a relatively poor family, and I started working as a dishwasher at 15 to give back to my family … " he says. "And as I built my companies, I wanted to create a culture where you could be a mom and a CEO. Where you had the flexibility to take time off for family and live a quality life. And I wanted to leave a legacy for my children. I wasn’t afraid of being poor; but I was afraid of looking back at my life and wondering ‘what if?’"

"No one counts your stuff when you’re gone. But the impact you made matters," he adds.

It’s a philosophy that bleeds throughout the Fairgrounds model, but it might be most obvious in the brand’s commitment to charitable giving. 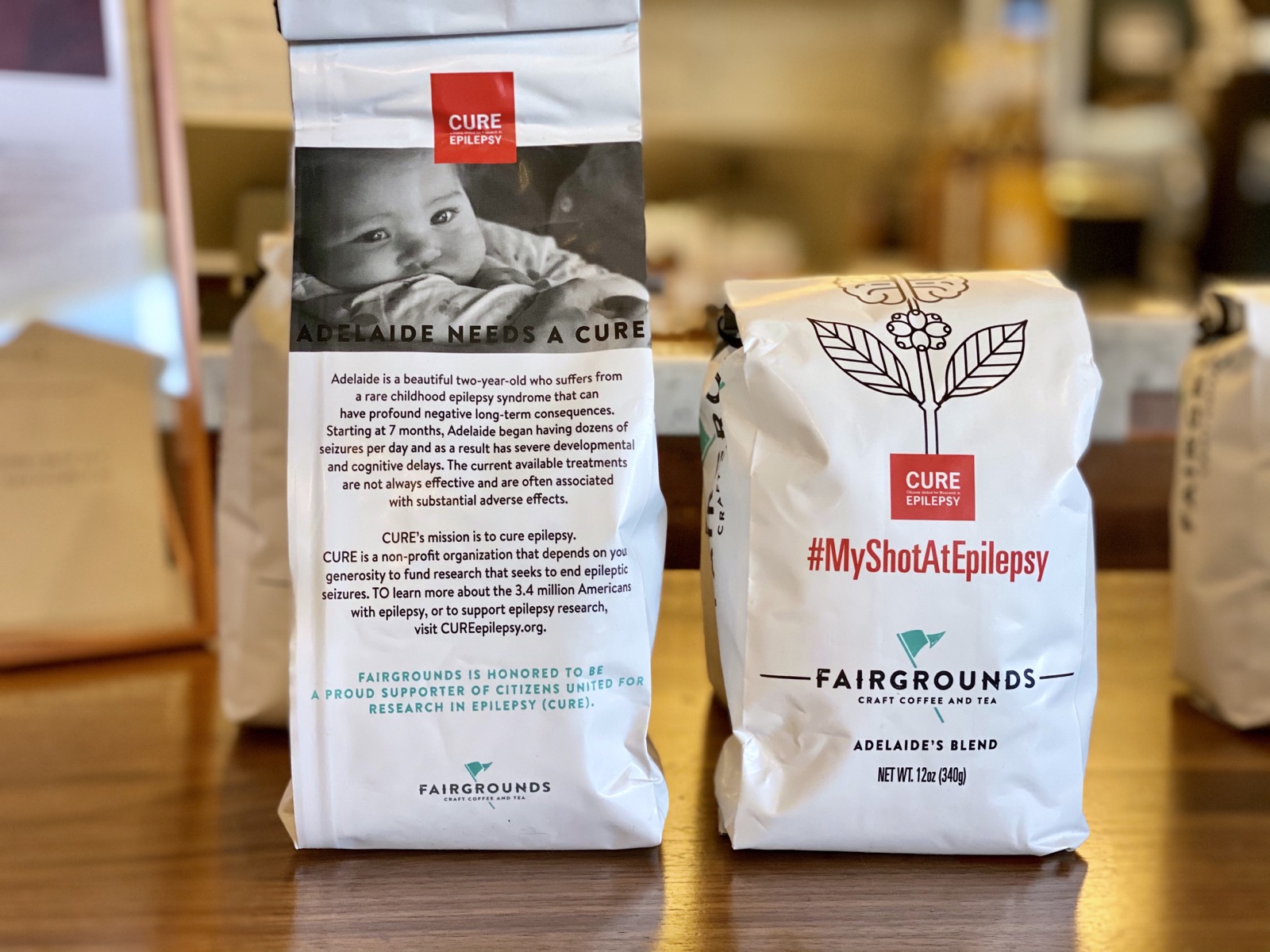 "A few years ago, someone introduced me to Miguel Cervantes who now plays "Hamilton" in Chicago. And he and his wife Kelly shared the story with me about their daughter, who suffered from a severe form of childhood epilepsy. By the end of their story, I was sobbing, and I turned to Miguel and said: ‘I don’t care what you do for a living. You’re a dad and I’m a dad. And I want to do whatever I can to help you.’"

So Schultz connected with David and Susan Axelrod, co-founders of Citizens United for Researching Epilepsy (CURE), partnering with them to create Adelaide's Blend, a custom blended whole bean coffee. Proceeds from the sale of the coffee supports the work of their organization, which has raised more than $60 million to fund research and other initiatives related to finding a cure for epilepsy.

"It’s so often a disease that people are ashamed to talk about, share with their friends or divulge to their workplaces," he says. "So we created a coffee blend, Adelaide’s Blend, named for Miguel’s daughter. And we partnered with CURE to raise money and awareness for epilepsy research."

As Schultz relayed the story, his eyes welled up. Adelaide Cervantes had passed away on Saturday, Oct. 12, just a few short days before her fourth birthday.

"She was the strongest little girl," he says. "And we don’t want her life and story to go untold ... Miguel was celebrating the success of Hamilton, but he had to confront his grief as a father. And his grief moves me. We simply need to find a cure so that other parents don’t need to go through this."

On opening day, Fairgrounds will donate 20 percent of all sales to CURE. They have also committed to donating 20 percent of the lifetime sales of "Adelaide’s Blend" to the organization. Individuals who wish to give directly to CURE can also do so at any Fairgrounds location.