Glass + Griddle is a burgeoning beauty of a beer hall

Venue 42, the new mixed use development which includes The Factory office suites, Milwaukee Brewing Company, the Venue Forty Two event space and Glass and Griddle beer hall and restaurant, will host a grand opening celebration later this month. But we have a first look at the gorgeous new space.

Venue 42, the new mixed use development located in the former Pabst Complex at 1130 N. 9th St., is almost ready for its debut to the beer drinking and dining public.

The development – which includes The Factory office suites, Milwaukee Brewing Company (which is due to open fully in mid-September), the Venue Forty Two event space and Glass + Griddle beer hall and restaurant – will host a grand opening celebration later this month. 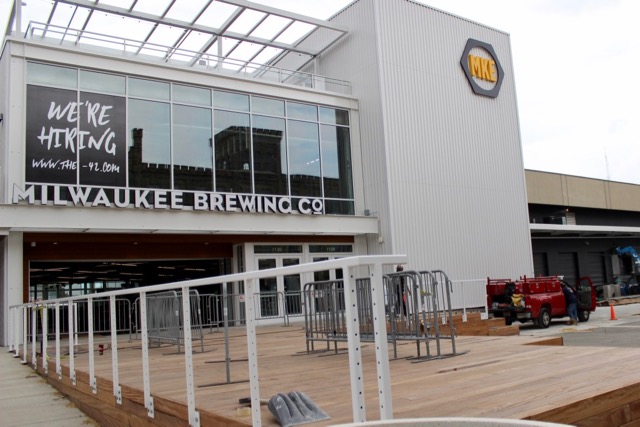 During the festivities, which take place during the Harley-Davidson 115th Anniversary Celebration Aug. 29 through Sept. 2, Glass + Griddle will open at noon, serving food until 9 p.m. and beverages until 1 a.m., and the brewery will be open for beers at the taproom bar and tours of the new space. Meanwhile, throughout the day, local artists will perform at the complex each day from 1 until 10 p.m.

Beginning Sept. 6, Glass + Griddle will officially open to the public, offering an expanded menu and regular hours seven days a week. In the meantime, we’ve got a first look at the new space, which is shaping up beautifully.

Finishing touches are still in the works at G+G, but the beauty of the space, which was designed by Rinka Chung Architecture and built by Stevens Construction, is already easily discerned. Take the patio and beer garden, for instance, which together seat between 250-300 guests. You can envision the wooden deck filled with benches and chairs. 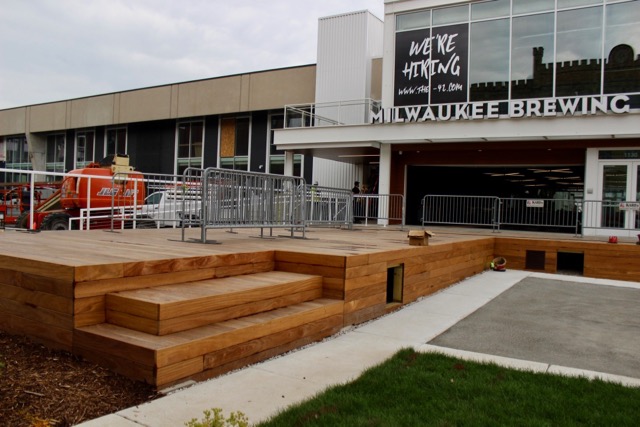 The cemented area below will eventually showcase numerous fire pits and a well-appointed collection of lounge furniture. The space will feature pop-up canopies to protect guests from inclement weather along with full AV capabilities, including a sound system that’s among the best in the city, beaten only by the one in the new Fiserv Forum. 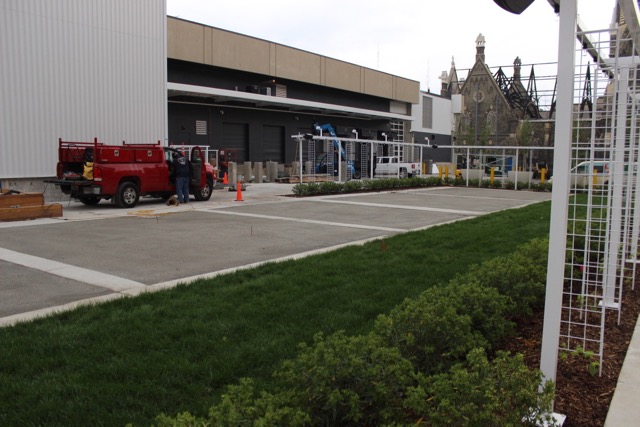 Guests' first view of the restaurant, which lies behind the garage doors at the front of the building, showcases a dining area where simple furnishings sit juxtaposed against a punched copper and industrial metal ceiling with inventive integrated lighting. 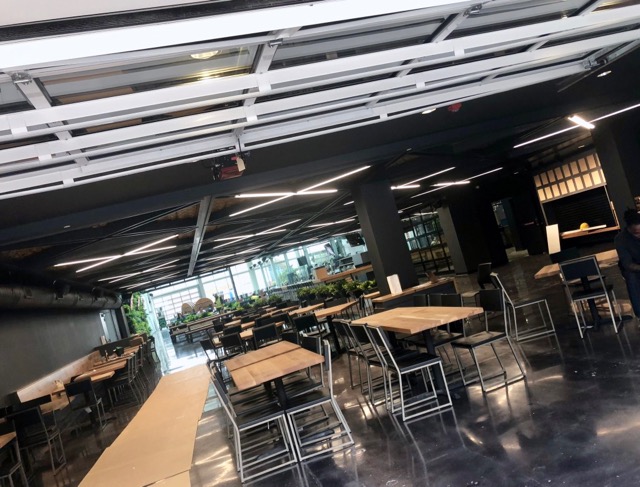 Step further into the space and you’ll find the venue’s crowning glory: the beer hall, which seats another 100 guests at long communal tables with benches. The area features nine televisions with fully zoned audio as well as an extensive living wall filled with greenery. Meanwhile, the towering glass ceiling offers a bright space unlike any other in the city. 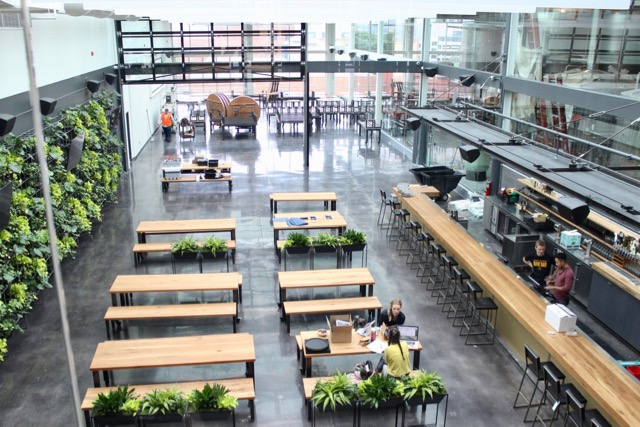 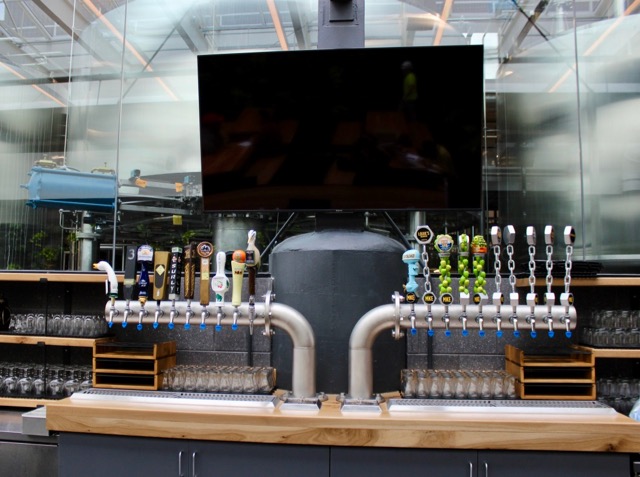 There are also craft cocktails and a collection of tap wines (four whites and four reds) including selections from local winery Stringer Cellars, whose reserve Cabernet will also be available by the bottle.

Non-alcoholic options will include Anodyne nitro cold brew and Rishi Craft Brew in flavors like black limon and schisandra berry.

The kitchen at the brewery benefits from the talents of Wolf Peach alums, including Executive Chef Kyle Toner and Chef de Cuisine Daniel Pope. The resulting menu is both familiar and creative, featuring a variety of items, from snacks and shareable plates to sandwiches, burgers and a few entrees.

Among the salads and vegetable dishes are familiar Wolf Peach staples like cauliflower and chickpeas with tahini sauce ($10) and roasted beets with mixed greens, avocado, citrus and pistachio ($10).

There are nods to Toner’s Italian background like an Italian roast pork sandwich with broccoli rabe, peppers and sharp provolone served up on a classic Kaiser roll ($12) and griddle seared lasagna with ricotta, spinach and marinara ($18).

Ingredients from Milwaukee Brewing Co. show up in a variety of dishes like the highly snackable "Brewery Granola" which incorporates both the brewery’s spent grain and is sweetened with wort syrup. There are also pork rinds featuring a coating of brewers yeast and malt vinegar (the latter of which will eventually be made in house), and Louie’s Beer Cheese, a spread made with beer infused mustard seeds and served with pickled onions and saltines.

Other items feature ingenuity in technique. Take the pretzel pierogi made from housemade dough that’s filled with either bratwurst or cheddar, then boiled in alkaline water (just like a pretzel), giving them a unique pretzel-like flavor, and then seared in butter.

Even the jalapeno poppers have been reimagined. The jalapenos aren’t sliced lengthwise; they’re cut into wide slices, each of which are filled with cream cheese, coated in crushed tortilla chips, deep-fried and served with housemade salsa verde. 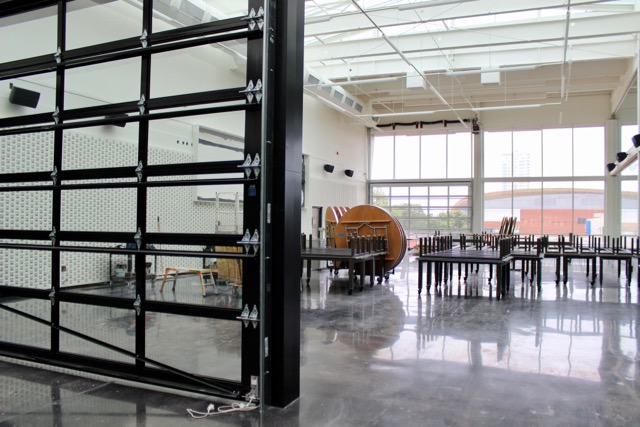 The private space boasts its own catering kitchen, an exterior garage door offering a spectacular city view and glass walls which offer a peek inside Milwaukee Brewing Co.’s production area. Amenities include a video wall comprised of 16 52-inch televisions which can be operated independently or collectively to broadcast any number of visual elements from sports games to corporate presentations or video montages. The screens are accompanied by a state of the art sound system. For more information, or to inquire about a booking, visit venue42.com.

Among things to look forward to at Venue Forty Two is the rooftop patio, which will feature a bar, food service and a number of amenities (many of which are still in their planning stages). 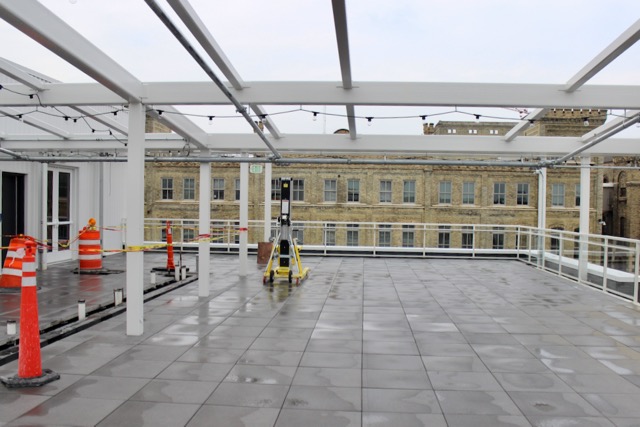 The patio, which is expected to open next April, is already taking shape. In addition to an covered patio area, which will offer shelter from both the hot sun and rain, the rear of the space will be completely open air with its own unique view of the city (including the new Fiserv Forum). It's beautiful, even on a cloudy, rain-laden day. 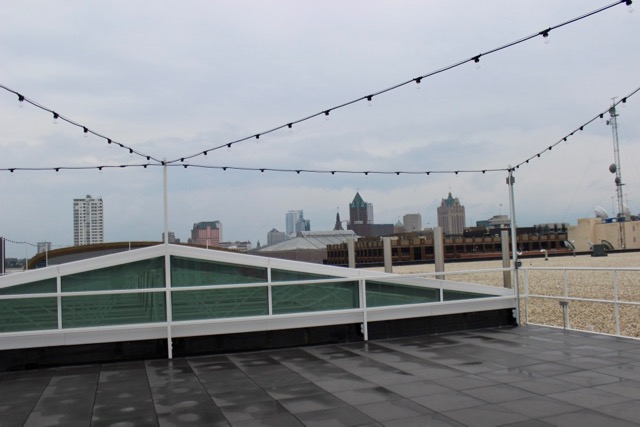 Current plans for the rooftop also include sand volleyball courts, which will be located just to the south of the patio area in prime view of Trinity Evangelical Lutheran Church, which is currently being rebuilt after a devastating fire. 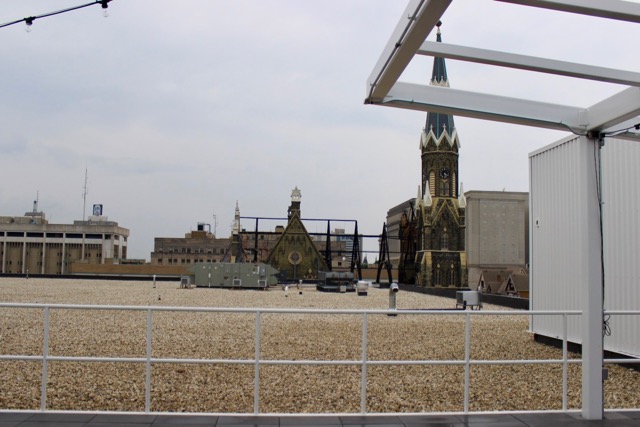 Beginning Thursday, Sept. 6, Glass + Griddle will be open to the public seven days a week from 11 a.m. to 10 p.m. They will offer happy hour Monday through Thursday from 4 to 6 p.m., as well as a late night menu from 10 to midnight daily.