Thank Cod it's Fryday: Belly Up Bar in Menomonee Falls

Belly Up is one of those spots where you feel like you’re getting a true look at the local scene. This old school townie bar is located just off of Main Street on the outskirts of town (now surrounded by a subdivision), and it’s the sort of place that I’d imagine has a regular clientele of locals who drop by on a daily basis for a shot and a beer.

It’s a small place. The bulk of the square footage is occupied by a u-shaped bar; but there is a small seating area with about seven tables that accommodate small groups. Seating is a bit tight, but folks are friendly so you won’t find it overly uncomfortable.

So often the fish fries served up in bars fall short; but that’s not the case at Belly Up where you’ll find details like housemade potato pancakes (and German potato salad!), along with solid fish and a nice old fashioned.

On Fridays, fish fry options include a three-piece beer battered or breaded cod ($11), four- to five-piece breaded perch ($15.75), breaded shrimp ($11.75), scallops ($16) or a seafood platter featuring either cod or perch with shrimp and scallops ($15 or $16.25). Options are served with your choice of potato (Becky’s famous German potato salad, potato pancakes or french fries), rye bread and coleslaw. 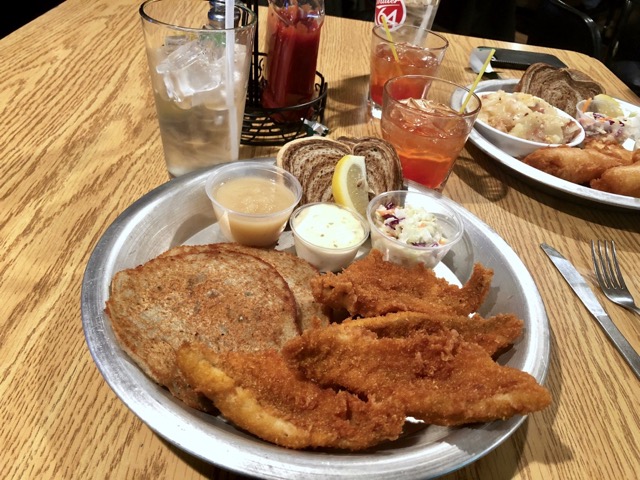 Pro tips: If our experience rang true, it’s best to arrive early or later, as the bar fills up pretty quickly on Friday nights. Also, Belly Up is a cash-only bar, but there is an ATM on the premises in case you’re caught ill-prepared.

The perch fillets were large and came four to a plate. The breading was ultra crisp and well-seasoned. It was definitely a heavier coating than I’d normally prefer, but in this case, it was a delicious match for the hefty fillets of tender, flaky fish.

Meanwhile, the cod sported a light, airy beer batter that was both crisp and tasty. The flesh of the fish was tender and mild. It was a bit on the greasy side, puddling just a bit onto the platter, but overall a solid choice.

Belly Up’s housemade potato pancakes are some of the first I’ve come across that are made with mashed potatoes. And that wasn’t a bad thing. They were thin cakes, but generously sized. The interior was tender, creamy and well-seasoned, while the edges of the cakes were nicely crisped.

In general, I’d pick potato pancakes over most other offerings. But I have to give an honorable mention to their German potato salad, which was served just warm with a sweet and sour dressing just like grandma used to make. If you enjoy a good old fashioned potato salad, Belly Up's is definitely a worthwhile choice. Definitely worthy of its "famous" status. Even better, you can get a half-pound of it for just $3.50.

It seems everything at Belly Up is solidly executed. And that included the old fashioned. It was a well-balanced cocktail. There was a nice fruit presence, if only a whisper of brandy (but I do like my old fashioneds just a bit stronger). It wasn’t too sweet or soda forward, and there was muddled fruit present in the base of the glass.

Got suggestions for our next fish fry? Email lori@staff.onmilwaukee.com. Suggested fish fry menus must include lake fish (walleye, perch), potato pancakes and a stellar old fashioned.