For years, folks have been urging me to head to Liquid Johnny’s for their Friday night fish fry. Despite countless recommendations and the bar's own declaration of "Best Fish Fry in Town," I never got around to it. All of that changed this month when I put them on my list of bar fish fries to try.

This West Allis watering hole is located in an historical building which has housed a tavern since the early 1900s. It’s small and clean with well-appointed decor that makes it feel like a slightly upscale version of a neighborhood tavern.

Unsurprisingly, there was an hour wait at 6pm on a Friday night during Lent. But, the staff was friendly and we weren’t famished. So we ordered up a couple of (very affordable) highballs and whiled away the time chatting and watching countless fish fries being delivered from the bar kitchen to eager guests throughout the bar. 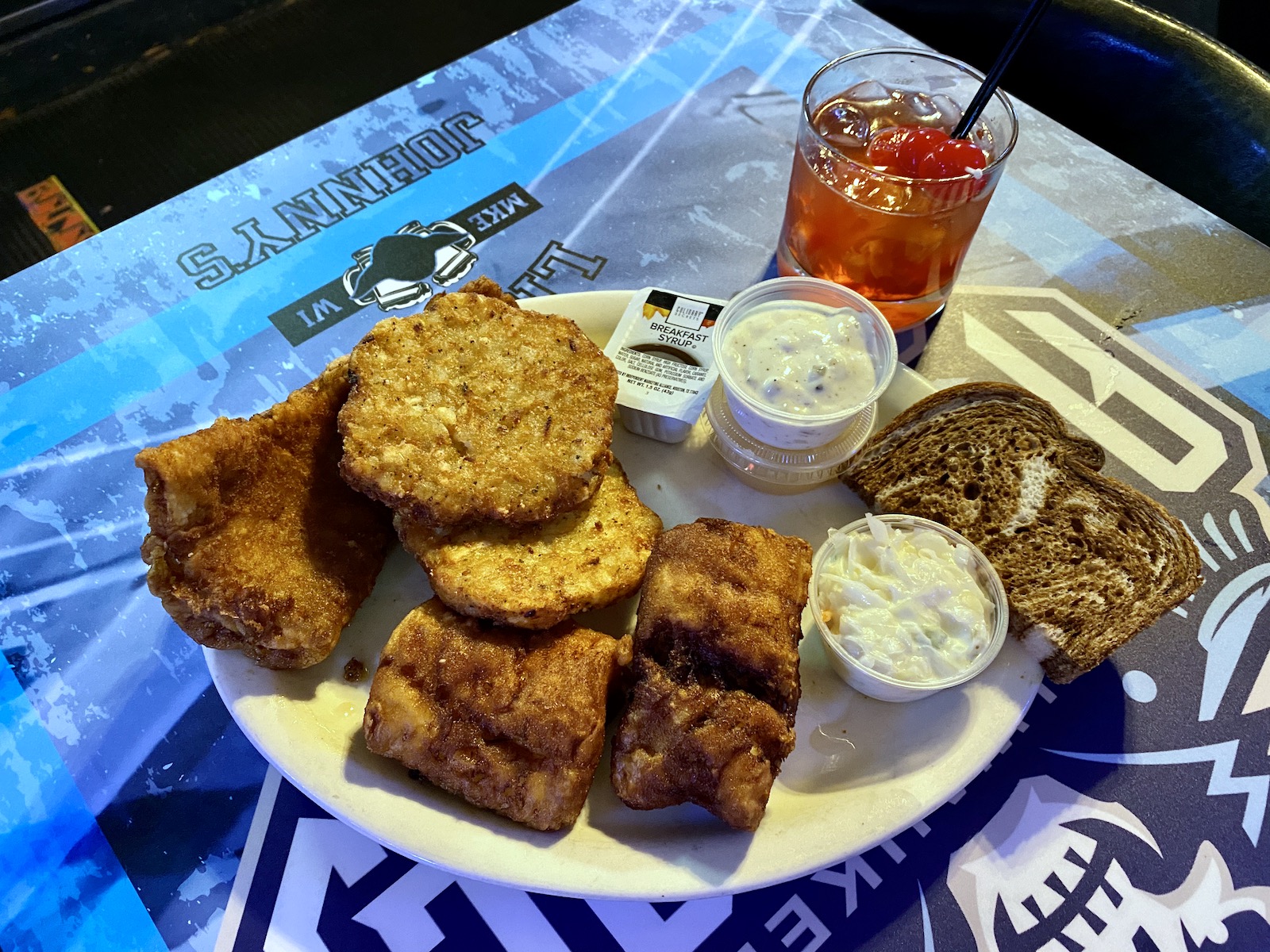 Each plate comes with coleslaw, rye bread and a choice of fries, tater tots or garlic mashed potatoes. Potato cakes, wedges, onion rings, a cup of clam chowder or a side salad can be substituted for $2 more.

*According to our server, the restaurant is currently serving Euro-perch, a common substitute for lake perch which are currently unavailable due to low populations in the Great Lakes. 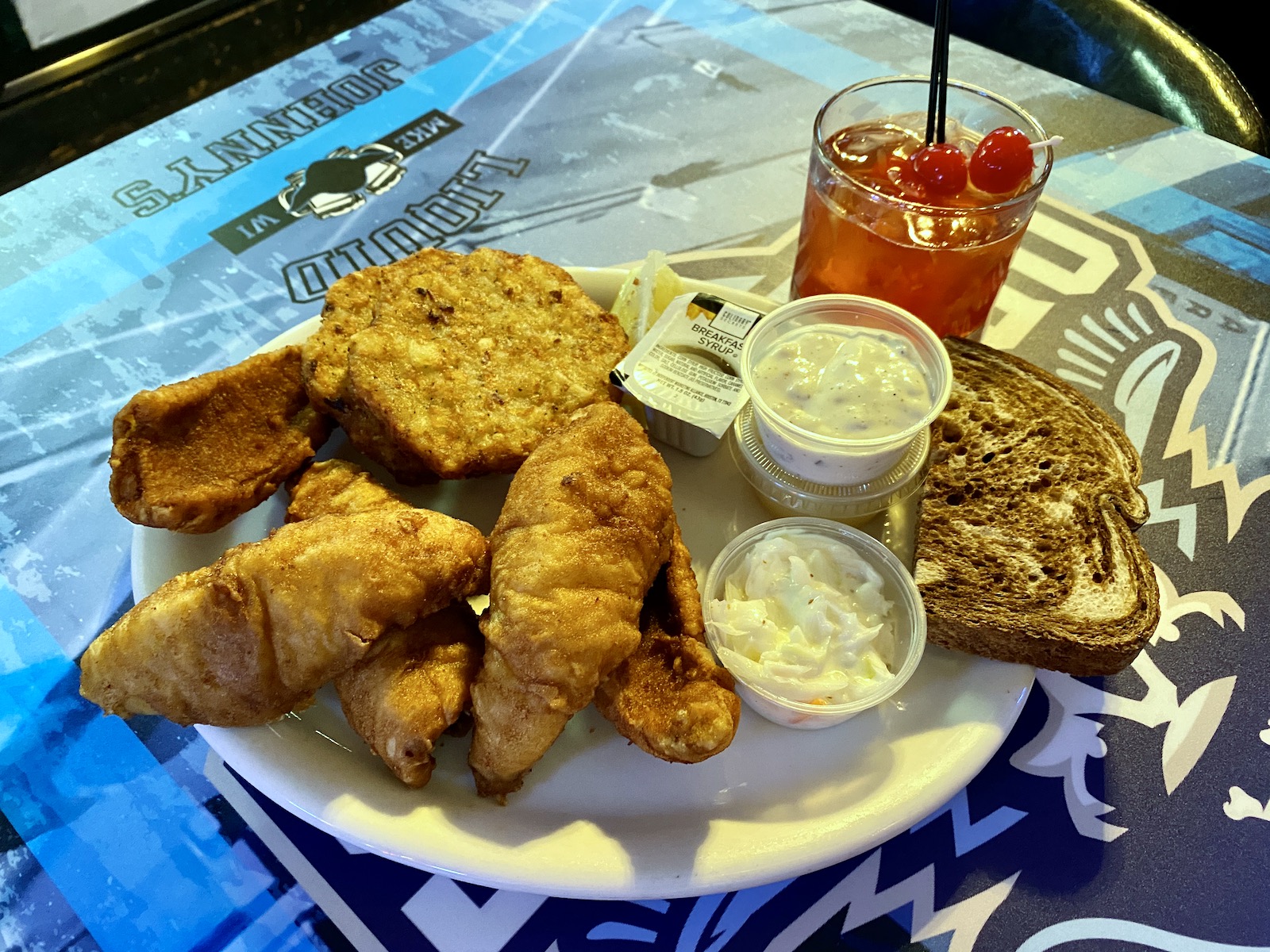 Between my dining companion and I, we managed to try all the fish options with the exception of the grilled cod.

The combo featured one large piece of walleye and two smaller portions of cod while the perch plate included five pieces of perch, which our server indicated was Euro-perch, a common substitute for lake perch during the Great Lakes shortage.

The beer batter on all the fish was uniformly crisp and brown. It wasn't too thick that it overwhelmed the fish and it clung to the exterior of each piece effectively. As for flavor, it was moderately seasoned with slight hint of beer. Unfortunately the tell-tale pools of oil which collected on our plates verified that it definitely erred on the greasy side.

Beneath the batter, the walleye and the perch were both acceptable in terms of flavor and texture. The Euro perch was expectedly mild with tender flesh and no signs of overcooking. The same went for the walleye, which was fairly mild and firm with a nice flakey texture. The flavor of the cod, on the other hand, was somewhat flat and its flesh slightly rubbery.

In the end, the lake fish was adequate. But it made me wonder if opting for the grilled cod would have been a more satisfying option.

While the fish didn’t quite meet my expectations, I was more saddened by the potato cakes. I’ve gone five or more fish fries without seeing a prefab flower shaped hash brown patty on my plate; and, if I’m honest, I would have liked to have gone longer.

The potato cake was nice and crisp, resembling – at its best – a hot, crisp McDonald’s hashbrown patty. But it wasn’t a potato pancake.

To be fair, I understand that bars often have small kitchens, so their ability to make extra items like potato pancakes can often be limited. However, while I’ll always gladly pay an up-charge for a housemade pancake, it’s admittedly a disappointment to see an upcharge for a frozen product that gets tossed in the fryer as easily as fries or tater tots.

The brandy old fashioned sweet appeared as a classic built with muddled fruit, a moderate brandy presence, just enough soda to round things out and enough bitters for balance and complexity. Overall, Liquid Johnny’s served up a solid on this front.

Liquid Johnny’s is open daily from 11 a.m. to close.