Is it a baseball bar? A biker bar? A classic Milwaukee watering hole with above average food?  Slick Willies appears to be all of the above. And it’s tucked away in South Milwaukee among a host of other neighborhood bars. And it’s a hidden gem, for sure.

Slick Willies skews in the louder side thanks to a mix of chatty regulars and what I like to call "bar rock" playing on the stereo. Surprisingly, it wasn’t filled to the gills at 6 p.m. in a Friday night during Lent. But I’m not one to look a gift horse in the mouth. After all, it was the fish fry I was after. 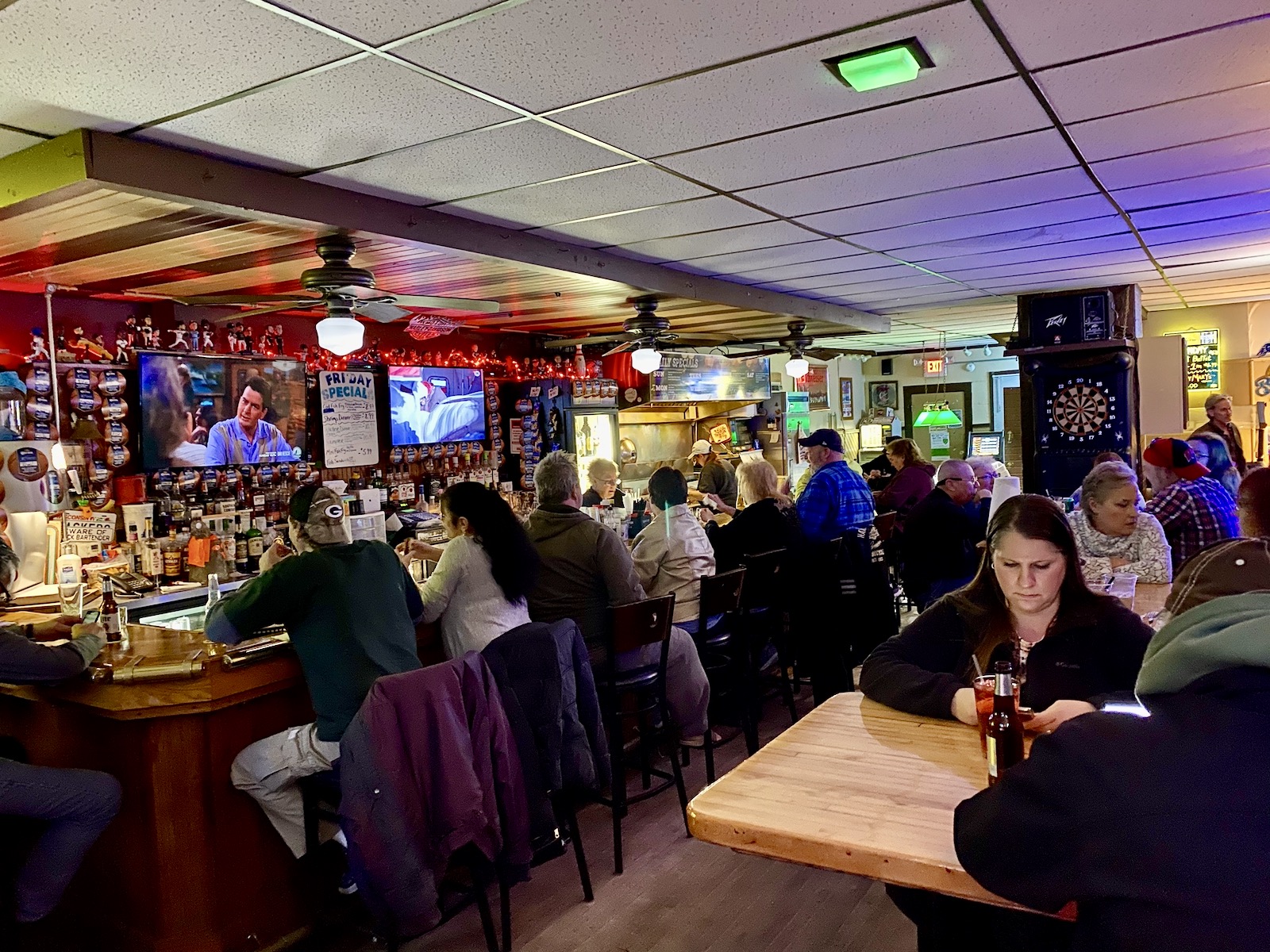 Fish fry offerings include beer battered cod (four pieces for $8.99 or two pieces for $5.99); breaded shrimp ($8.99); beer battered walleye ($10.99); or a sampler platter with cod, walleye and shrimp for $10.99. Fish fries are served with coleslaw, tartar sauce, buttered marble rye and guests’ choice of fries or potato pancakes. Also included are soup (clam chowder) and salad, both of which can be procured from the buffet at the back right of the bar. No matter which way you cut it, the Slick Willies fish fry is a deal. 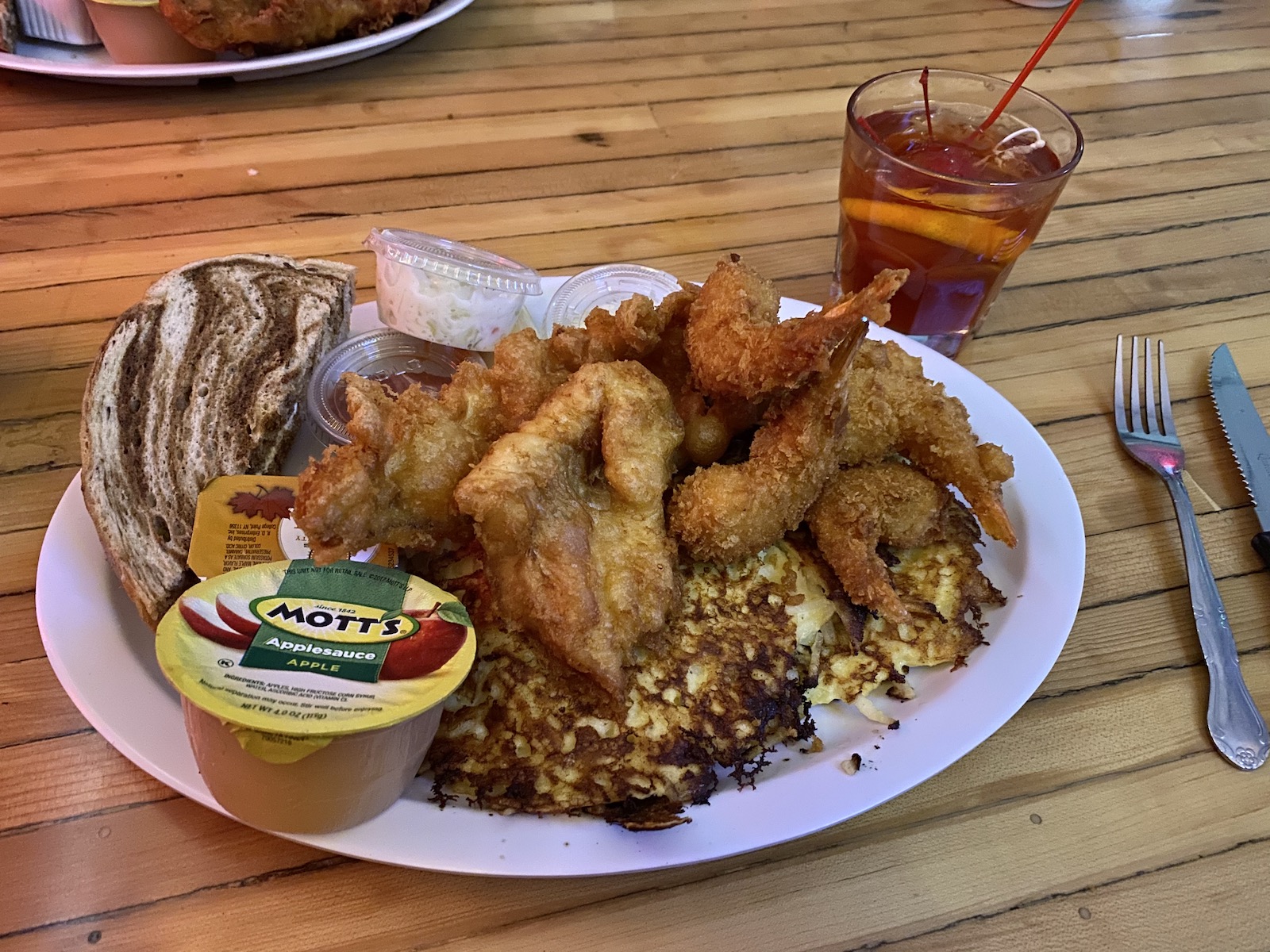 In an effort to try each of the fish offerings, I opted for the sampler, which included one large walleye filet, a large piece of cod and breaded shrimp.

Both the cod and walleye were fried in a flavorful beer batter that was light and crisp and not too greasy. Each fish retained its individual character, the cod boasting tender flesh and a mild, sweet flavor and the walleye showing off its earthier lake fish qualities (along with a few stray pin bones).

The shrimp were standard issue, but they did make me feel a bit nostalgic for the days when ordering up a plate of fried shrimp (or popcorn shrimp, which was popular at the time) was one of my childhood indulgences.

The housemade potato pancakes weren’t hashbrowns, but they resembled them in build. Comprised of shredded potatoes, a smattering of green onions and a thin batter which fell through the shredded potatoes, they cooked up very much like a crepe, with a moist, loose texture and a mottled exterior that boasted little lacy edges.

They were neither crisp nor notably seasoned, and (like hashbrowns), they fell apart readily when prodded with a fork. While I probably wouldn’t have traded them for fries, I found myself torn. On the one hand, they're not serving up little prefab potato patties, as so many bars do. On the other, it was hard to deny that they would have benefited greatly from a bit of salt, a more effective binding agent, and the crispness that truly sets a lovely potato pancake apart.

All of that said, the classic muddled cocktail at Slick Willies put a great number of its watery counterparts to shame. The drink was pleasingly brandy forward with a solid bitters presence, two cherries skewered on a sword and tell-tale grit from the addition of sugar. It was enjoyable to drink and – as Wisconsin style old fashioneds are concerned – as solid as they come. At just $4, this was the sort of cocktail that made me feel as if I’d just traveled back in time.