Designed with the look and feel of an English Pub, the Butler Inn is a comfortable spot with dim lighting and a classic friendly vibe. The dining room sports hefty wooden furniture, Tiffany-style lamps and branded glass windows which separate it from the bar area. Everything is just a little bit old-school, right down to the plates, which are still garnished with pieces of kale, a hold-over from a time before the curly greens were recognized as a "real" vegetable.

Owned for years by the Marks family, and today by restaurateur David Tomter, the Butler Inn has seen its share of history. Long before the building was damaged by a fire in 1980 and subsequently rebuilt as an English pub-style venue, it was a hotel that served railroad employees working at the nearby Butler Yard. Even today, historic photos in the restaurant’s menu pay homage to the rail workers who put the Village of Butler "on the map" during the golden age of rail.

Folks visit the bar and restaurant for numerous reasons. Many go for the ribs or pizza. Others visit for daily specials like all-you-can-eat broasted chicken on Wednesdays and $0.50 wings on Thursdays. In my case, I went to try out the Friday fish fry.

Pro tip: If you’re up for it, the cajun turtle soup is also worth your while. And this might sound a bit wild, but it’s also delicious mixed into the clam chowder. The latter was a suggestion that came from our server, and it was pretty delicious. 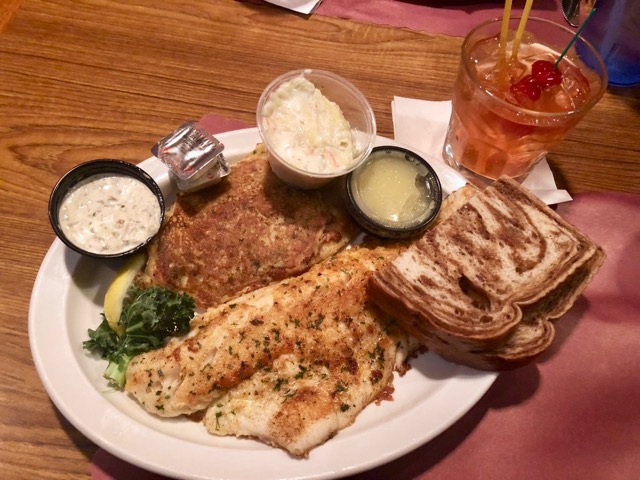 Thanks to an enthusiastic recommendation from our server, I forwent my usual choice of fried perch in favor of the pan-fried walleye. And it was a good move. The large walleye fillet was well seasoned with a thin semi-crisp exterior. The fish itself was flaky and mild with a clean flavor and a beautiful texture.

We also tried the Icelandic cod, but you can promptly push that out of your mind (and I did not factor it into the overall fish score this time around). The batter was crisp, but the fish beneath was dry and a a bit tough. It could have been a fluke, but based on our experience I’d definitely recommend taking a pass on the cod in favor of the far more well-prepared walleye.

Billed on the menu as "our delicious potato pancakes," these cakes were quite tasty. They were very soft, much like a breakfast pancake, with a browned (but not crisp) exterior. Not quite the light, crisp pancakes I’m apt to rave about. But they were solid, and definitely housemade.

The old fashioned didn’t exhibit the classic muddling or balance one might expect from a bar that’s been operating for as long as The Butler Inn. It was pleasantly sweet with just enough brandy, but it didn’t have the brightness of orange that’s achieved from a good muddle and was generally underwhelming in its complexity.