Even on a nasty sleety Friday evening, Explorium Brewpub was hopping. In fact, the fire pit was blazing and there were even a few adventurous souls braving the damp cold weather to sit at the patio bar. Good on you, Milwaukee. We need more of that here in a city where the spring forecast is a virtual game of weather roulette.

Inside, the restaurant was warm and bustling. In fact, the vibe was so congenial and … brewpub-ish that I easily forgot that I was sitting inside the mall. And when you look at the menu, it’s even easier to forget exactly where you are. The place is a craft beer haven, with the food to match. So I was eager to see how their fish fry measured up.

Of the official fish fry options, there are two: a fish of the day (harvested from the Great Lakes) dipped in Sutter’s Secret Golden Ale tempurah batter and deep fried ($15). There’s also cast iron baked cod finished with butter ($14). Both are served with tartar sauce, apple slaw and a choice of french fries or potato pancakes. However, if you’d like, you also have the option of ordering the brewpub’s fish & chips, which is on the daily menu. It features beer battered cod with fries, apple slaw and tartar sauce ($14). 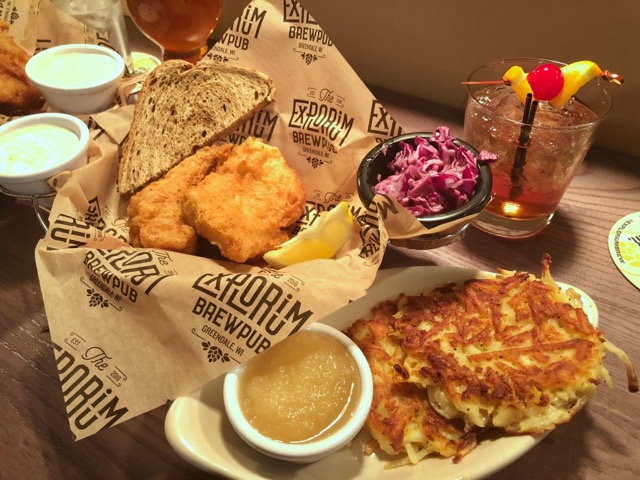 Worthy of note: I don’t usually review the slaw, which is probably good. Most places seem to treat it as an afterthought. However, the apple slaw at Explorium is delicious. Crisp, fresh and pleasantly sweet from the apples with a nice, well balanced dressing.

The fish of the day was lake trout, and my basket featured two hefty portions. The tempura batter was super light with a nice flavor and excellent texture (the best sort of beer batter, really); even better, it wasn’t at all greasy. And the trout itself was tender and full flavored. The jury is out for me on whether a trout fry is among my favorite options when it comes to lake fish, but I can’t fault this fry for being ill-prepared.

Meanwhile, the fish and chips basket was similarly presented (with fries instead of pancakes). The cod benefited from the same batter, but didn’t have the same flash. The fish itself was mild, and generally tender, but there were places around the edges of the fillets that were dry and a bit chewy, making this option less satisfactory than the trout.

These potato pancakes were lovely. They were largely comprised of shredded potato (as they should be, in my opinion) But those potatoes were well-seasoned and the cakes were evenly cooked and nicely crisped. Their interiors were soft and nicely flavored, and there were plenty of straggly edges to crunch.

Is it cheating to order the barrel aged brandy old fashioned? In a spot like this, where beer rules, I’m going to say no. I felt even more validated after taking my first sip. It’s definitely not your grandpappy’s Wisconsin old fashioned, but it’s delicious. The drink is spirit forward with soft citrus notes and a pleasant sweetness. I didn't catch a lot of barrel flavor, but there was touch of caramel and vanilla that helped to round things out. There’s no muddled fruit, but it’s nicely garnished with a fresh orange slice and maraschino cherry.