In this series, we're trying some of the city's most popular fish fries. You'll find commentary, pro tips and ratings of the three staples of a classic Wisconsin fry: the fish, the potato pancakes and the classic Wisconsin-style brandy old fashioned.

In this series, we’re trying some of the city’s most popular fish fries. You’ll find commentary, pro tips and ratings of the three staples of a classic Wisconsin fry: the fish, the potato pancakes, and the classic Wisconsin style brandy old fashioned. View all fish fry reviews here.

A sports bar located in the shadow of Miller Park, J&B's has a friendly upbeat vibe, a large pub food menu and a pretty extensive beer selection. Among the menu items is a fish fry that’s served on both Wednesdays and Fridays.

When we visited on a Wednesday evening, folks were gathering around the bar, waiting for the Bucks game to begin. So, we took one of the nearby window seats, where we could catch some of the action while enjoying our fry. 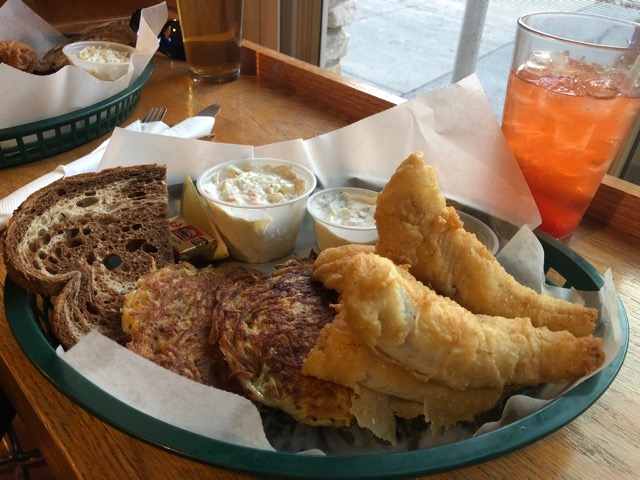 The perch fry comes with four nicely sized fillets coated in a light flaky batter that wasn’t overly seasoned but had a nice flavor. The fish itself was very tender and definitely not overcooked or dry, but the fillets may have been slightly too wet when battered, as the coating had a tendency to separate from the fish at the slightest touch. The perch, specifically, was also somewhat greasy (it pooled a bit in the bottom of my basket). A few seconds longer draining in the fryer would've done them a service.

The cod, on the other hand, was crisp and nicely browned on the exterior and tender, flaky and flavorful on the inside. It was notably less greasy than the perch, giving it a partial leg up.

The potato pancakes were thin and crisp with a visible presence of finely grated potato. They get points for appearing housemade; however, they were devoid of the (tasty) onion presence that normally distinguishes a potato pancake from hashbrowns. If you don’t like onions in your pancakes, these might just be for you. Me? I think a potato pancake needs them for flavor.

The old fashioned at J&B’s is pretty sweet and soda-forward, but it offers just enough brandy flavor that you still feel like you’re drinking a cocktail. There’s both a nip of bitters and muddled fruit present. I bumped it up a half-point, since they serve it automatically as a double.