Jonny Hammers is a spot with personality and a distinctly friendly vibe. And if the rumors I've heard are true, the kitchen puts out better-than-average bar fare. In fact, there were all the indications that this could well be the perfect spot to encounter a true hidden gem of a fish fry.

If you fancy eating a fish fry at a Grateful Dead and classic rock themed bar, Jonny Hammers is your spot. It’s a place where the music plays as loud as the laughter echoes. Folks are friendly, you can meet plenty of regulars at the bar. And, an added bonus, there are pool tables in the side bar that you can use any day of the week (for free).

While we waited for our food, which did take a while, we enjoyed a drink, took in the sight of folks playing pool, and listened to the bar’s flashback-filled playlist, which included the Grateful Dead (of course), The Eagles, and a surprise track from Rick Astley (talk about a Rick Roll!).

It’s a spot with personality and a distinctly friendly vibe. And if the rumors I’ve heard are true, the kitchen puts out better-than-average bar fare (including some seriously tasty-but-incendiary wings). In fact, there were all the indications that this could well be the perfect spot to encounter a true hidden gem of a fish fry.

Pro Tip: Jonny Hammers offers fish fry most days of the week, with the exception of Thursday and Saturday nights (when the volume of wings coming out of the kitchen prevents Them from offering both). Friday nights – according to the menu – is "reserved for Mrs. Hammer’s beer battered cod." 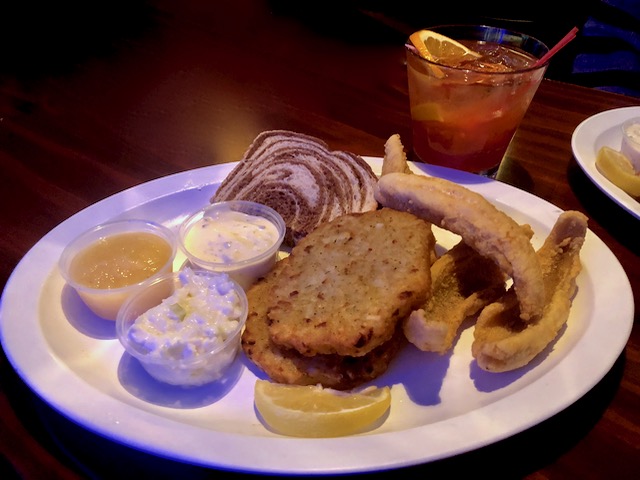 The fried perch was tender, not shriveled or dry. It came crisp and lightly breaded. It’s biggest fault, by far, was that the breading wasn’t very well seasoned, so the flavor was floury and bland.

Meanwhile, the beer-battered cod was nicely crisp, with an irregularly textured batter-like coating. Unfortunately, like the perch, it was also under seasoned (especially next to the salty potato pancakes). And that’s a shame, because it had all the potential to be a tasty option, particularly for a non-fish-fry night.

Jonny Hammers pancakes (of which you get two) are uniformly shaped with a crisp exterior. They were pretty salty and somewhat greasy. And, despite the fact that they had some onion flavor, in the end, they were not the potato pancakes of my dreams. I'd opt for the hushpuppies, which were tender and slightly sweet.

The old fashioned (just $4) was pretty as a peach, garnished with fresh cherry and orange and possessing evidence of muddling. But on first taste I found it to be super heavy on both the cherry and soda. I sipped and sipped, but never really detected more than a hint of brandy. Huh.