In this series, we’re trying out some of the city’s most popular fish fries. You’ll find commentary, pro tips and ratings of the three staples of a classic Wisconsin fry: namely the fish, the potato pancakes and the classic Wisconsin style brandy old fashioned. Since March is Bar Month, we'll be focusing on area watering holes that serve up Wisconsin-style fish fries. View all fish fry reviews here.

Having opened in 2015, Kam's Thistle & Shamrock is a relative newcomer to the West Side bar scene. However, in just a few short years, the Celtic themed pub and eatery has made a name for itself. 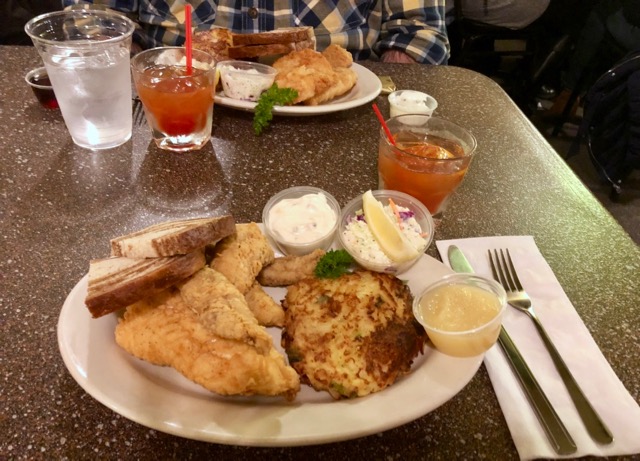 With so many types of fish from which to choose, it only made sense to opt for combination plates so that we could try a number of varieties. Among them, it was difficult to pick a favorite, since every single one was well-portioned, tasty and well executed.

Among the lake fish options, we sampled the perch, walleye and Northern Pike. The perch was lightly dusted with seasoned flour and fried. It was ultra crisp, delightfully seasoned and perfectly cooked, leaving the texture of the fish tender and flavorful.

The walleye came with a slightly thicker, but very similar breading. It was well seasoned, tender and flavorful. In fact, I’d rank it among the best I’ve had.

The northern pike is naturally a more firm, flavorful fish. And it shone in the light, flavorful breading, which showcased its tender, meaty flesh.

Meanwhile the cod, which had a similar breading to the walleye, was also spot-on with its crisp well-seasoned exterior and a tender flaky interior that showcased the best of what cod can be.

The pancakes are mid-sized and irregularly shaped, and they taste much like the pancakes I remember my mother making while I was growing up. Our came to the table steaming hot with crisp edges and a slightly dense texture. They’re well-seasoned with a potato-forward flavor that’s balanced with just a hint of green onion. They are served up with either applesauce or maple syrup, and it’s worthwhile to note that the latter is real maple syrup (not the maple-flavored corn syrup so often served in its stead).

Balanced and warmingly spirited, this was a solid example of a well-constructed Wisconsin old fashioned. The muddled fruit offered up a fair amount of citrus, while a healthy dose Angostura bitters balanced out the sweetness.