In the late 1970s and 80s, Klemmer’s Williamsburg Inn was a restaurant known for its beef and seafood dishes, along with offerings like roast duck flambe, surf and turf, and entrees like Chicken a la Klemmer. Its interior showed off an early American motif that included wooden spindle chairs, pewter accents and Dutch blue etchings. Waitresses were also in costume, dressed in long printed dresses and bonnets fitting of the period.

But those days have passed. Today, Klemmer’s is more often known for its banquet facility, which hosts weddings, funeral luncheons and the like. In fact, if it hadn’t been for a recommendation from OnMilwaukee readers Martin Hersh and Jim Miller, I might not even thought to have stopped in for a fish fry, which the restaurant serves on Friday evenings from Labor Day through Memorial Day.

The fish fry is held in the Governor’s Dining Room. And, if you know the history of the space, you’ll see nods to its former days as the Williamsburg Inn, including pewter chandeliers, a fireplace and some minimal art on the walls. The decor is otherwise quite sparse, albeit some seasonal coziness added by a festive Christmas tree and a few holiday lights.

Overall, the crowd at Klemmer’s skewed a bit older, but seemed to be comprised of numerous regulars, some of whom came in larger groups that were easily accommodated by the hall’s 8-foot banquet tables. 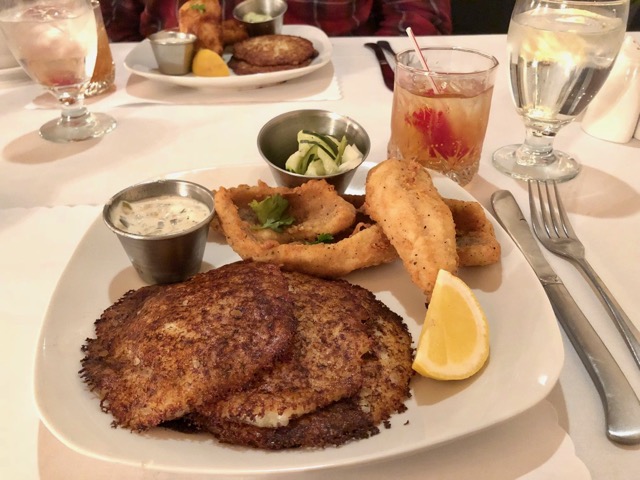 Klemmer’s perch plate is one of the prettiest I’ve seen: there was fresh lemon and parsley and the cucumber salad looked freshly made. It came complete with with four larger perch filets (8 ounces worth) with a standard light flour breading. The fish were well seasoned and tender and the coating crisp and flavorful.

Two pieces of beer-battered haddock had a nice beer flavor in the batter, which was also very crisp. The fish beneath was tender, and the batter didn’t separate from the fish when cut.

I would’ve liked to have tried the pan-fried walleye, as well; but that will have to wait until next time.

The potato pancakes were thin and tender. And despite a deep browned coloring on the exterior, they weren’t at all crisp, leading me to believe they’d been made ahead and stored, potentially in a steam tray. On the upside, they had a really nice flavor. They were well seasoned (maybe even erring on the side of being salty) with a nice hint of onion. In fact, they were quite enjoyable to eat and would’ve scored much higher if there had been ounce of crispness to be found on their exterior.

Klemmer’s old fashioned is served in one of the most charming crystal rocks glasses I’ve ever encountered; in fact, from the look of the cocktail, which contained a skewer filled with cherries, I would’ve guessed it to be a true classic. That said, it was pretty sweet and (if I’m not mistaking the flavor) made with 7-Up. I would've liked it to be a bit more brandy-forward; however, there was a notable and pleasant hint of clove, likely from the bitters used. There was also a hint of cherry and orange, though I didn’t see evidence of muddling left in the glass.

Klemmer’s is open seasonally for Friday night fish fry (Labor Day through Memorial Day), which takes place on Friday evenings from 4:30 to 8:30 p.m.