In this series, we're trying out some of the city's most popular fish fries. You'll find commentary, pro tips and ratings of the three staples of a classic Wisconsin fry: namely the fish, the potato pancakes and the classic Wisconsin-style brandy old fashioned. View all fish fry reviews here.

Walk into Klinger’s East and you’re (literally) walking into a piece of history. The building was erected in 1906, and over the past 100-plus years, it has housed countless establishments, most, if not all of which, were taverns. In the '50s it was Eugene’s Tavern and became Club Rendezvous in the '60s. New owners named it the Mousetrap in the early '70s. And then, in 1976, Glen Klinger bought the bar and renamed it Klinger’s East, adding to the bar’s square footage and expanding its focus to include a food menu sometime in the '80s.

Things have changed. But Klinger’s is still a blast from the past. Today, you’ll still enter the bar via a set of steep stone stairs. Once inside, you’ll find one of the most Wisconsin-esque bars in the area. It’s dimly lit, which keeps things cozy. And decor comes complete with church basement linoleum, wainscoting, a long sweeping bar, beer signs, a pool table and a Harley-Davidson pinball machine.

You’ll also find a (somewhat) old fashioned fish fry including battered pollock ($11) or breaded perch ($12.50) served alongside potato pancakes (or fries) and marble rye. Pro tip: You won’t get a cup of tartar sauce on your plate, but you’ll find it in a bottle on your table. 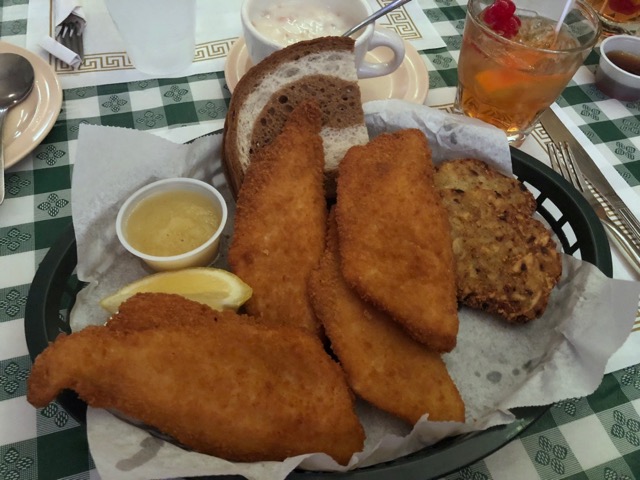 Your best bet at Klinger's is likely the pollock. The fish is tender with a mild flavor, and its breading (which I’m told is applied by hand) is light and flaky with good flavor. You’ll get two large fillets with your meal, which is plenty. But you can always order the Junior serving ($9), if you'd prefer a slightly smaller portion.

The perch, on the other hand (pictured above), was a pass for me. I ordered it even after our server shared that the fish was pre-breaded and cooked from frozen … because lake fish is (for me) a prerequisite for a classic Wisconsin fish fry. After all, it was unlikely the original fish fries featured cod or pollock when there was plenty of fish coming out of Lake Michigan. But I digress. The perch fillets were very large, a likely indication that they weren’t lake perch at all (they were more likely ocean perch or euro-perch, farmed fish imported from overseas). The breadcrumb coating was very crisp and mildly flavored and the flesh of the fish was mild and moist. Unfortunately, it reminded me more of fish sticks than high quality perch.

The potato pancakes were (alas) not housemade. Instead, they were the flowery shaped hash brown-style cakes that are becoming all-too-commonly found around town. Like most, they were crisp, but a bit on the greasy side. Under the circumstances, fries are likely a better bet (sad trombone).

The old fashioned was quite soda-forward. There was definitely a hint of brandy, but the cocktail overall didn’t have any particular complexity or balance of flavor. Drinkable? Yes. But I’d probably opt for a beer instead.