Thank Cod it's Fryday: The fish fry at McBob's

In this series, we're trying out some of Milwaukee's most popular fish fries, serving up commentary, fun facts, pro tips and ratings of the three foundational elements of a classic Wisconsin fry: the fish, the potato pancakes and the classic brandy old fashioned.

In this series, we’re trying out some of the Milwaukee area's most popular fish fries. In each article, you'll find commentary, fun facts, pro tips and ratings of the three foundational elements of a classic Wisconsin fry: the fish, the potato pancakes and the classic Wisconsin-style brandy old fashioned. While we're enjoying our fish fries, weekly Burger Trail articles will post on Mondays (follow along here). View all fish fry reviews here.

In the heart of the Uptown neighborhood, McBob's has provided an oasis of Irish hospitality since 1986. The bar and restaurant might not look like much from the exterior, but inside you'll find better-than-average bar fare, friendly service and a following that includes neighborhood regulars along with folks that visit from across the city and beyond.

Maybe best known for their corned beef (which is fantastic) McBob’s also offers up a generous fish fry featuring your choice of perch, walleye or grouper served up with coleslaw, your choice of potato, marble rye bread and tartar sauce. Pricing is $14.50 for perch or walleye ($11 at lunch); $12.25 for grouper ($8.75 for lunch); and $15.75 or $18 for a combination platter that includes your choice of two or three fish ($12.50/$15 for lunch).

Pro tip: Don’t miss McBob’s clam chowder (available Fridays only), which is delicious and studded with plenty of tender clams. 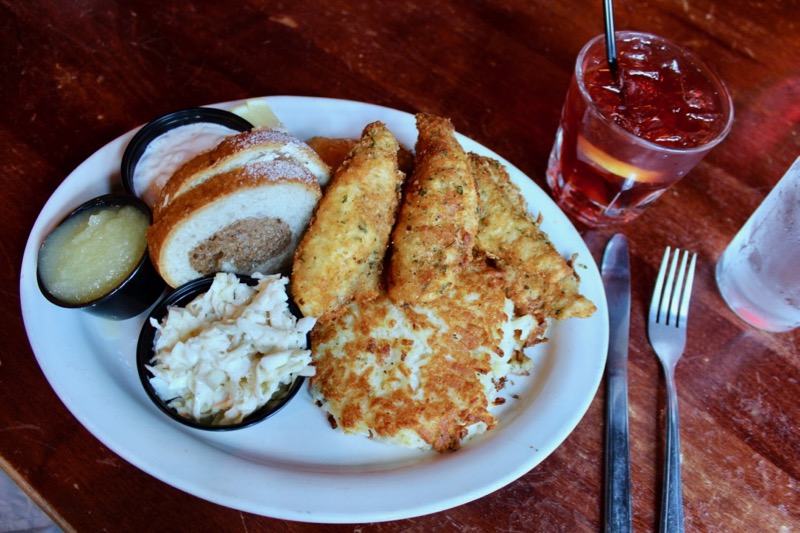 In my opinion, a Wisconsin fish fry has to include some sort of lake fish. And McBob’s offers two choices: perch or walleye. We sampled the perch as well as the the grouper, a mildly flavored fish with a texture that is notably more firm than cod.

The breading on all of the fish was well seasoned and ultra-crisp without a soggy spot to be found. And in both cases the fish was flaky and tender. That said, I found that the amount of breading was far better suited to the grouper which offered a meatier filet to balance the ratio of fish to breading. The perch, with its thinner filet and medium texture, was overpowered by the flavorful coating so you tasted very little of the fish itself.

When it comes to potato pancakes, the best of them contain shredded potatoes, which provide texture throughout as well as those delightful straggly edges that grow crisp when pan fried. McBob’s didn’t disappoint. The pancakes were thick and flavorful. The potatoes (which appeared to be a combination of mashed and shredded) were well seasoned and the cakes were creamy on the interior and crispy on the exterior. There were also plenty of crisp little edges to nibble.

The brandy old fashioned sweet was as solid as they come. It was sweet but brandy forward with hints of cherry and orange. There was also evidence of muddled fruit in the glass, a must-have when you’re drinking this Wisconsin classic.

Got a recommendation for one of our next fish fries?
Email your suggestions to lori@staff.onmilwaukee.com. Please note: Suggested fish fry menus must include lake fish (walleye, perch), potato pancakes and a stellar old fashioned.