In this series, we're trying out some of the city's most popular fish fries. You'll find commentary, pro tips and ratings of the three staples of a classic Wisconsin fry: namely the fish, the potato pancakes and the classic Wisconsin-style brandy old fashioned.

In this series, we’re trying out some of the city’s most popular fish fries. You’ll find commentary, pro tips and ratings of the three staples of a classic Wisconsin fry: namely the fish, the potato pancakes and the classic Wisconsin-style brandy old fashioned. View all fish fry reviews here.

Founded by the Wiken family in 1974, The Packing House captures the spirit of supper club dining with its lofty paneled ceilings, dim lighting and an atmosphere that evokes key qualities of old school fine dining without a stitch of stuffiness.

Like many long-time Milwaukeeans, I have fond memories of visits to The Packing House with my extended family during which we’d indulge in steak or seafood and a long evening of drinks and conversation. That said, it’s been years since I’ve dined at this classic spot. So I was eager to see if it would still pass muster.

It goes without saying that The Packing House fish fry, which can be eaten at the restaurant or picked up to go from the restaurant’s drive-thru, is exceedingly popular. The drive-thru line alone is long enough on any given night to warrant a level of expectation about what’s to come.

Fish fry options include hand breaded cod ($13.95; $12.95 before 6 p.m. and $7.95 for a children’s portion), baked cod ($16.95), hand breaded perch ($19.95) or a combination featuring both breaded cod and perch ($18.95). Each plate comes with a cup of clam chowder, coleslaw and a choice of french fries or potato pancakes. Accompaniments also include a relish dish and basket of salted marble rye. 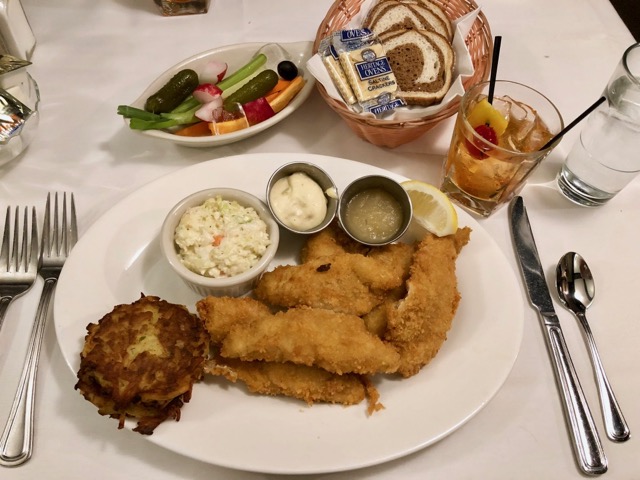 Portions at The Packing House are generous. The perch plate was hefty, boasting three whole butterflied perch. The thick fillets were moist and flaky; but they were buried beneath a very crisp, thick breading that overwhelmed the flavor of the perch. The breading also erred on the side of blandness, leaving me to reach for the lemon and tartar sauce for flavor.

I was equally disappointed by the cod plate, which featured four pieces of cod with a light breading that was fried to a deep brown. Unfortunately, the flesh of the fish itself had lost a good deal of its moisture, leaving it dry and less tender than would be ideal.

In the end, both fish options left me largely underwhelmed.

The potato pancakes fared better. They were small thick cakes with a moderately heavy texture that belied the fact that they were made in-house. They were well-seasoned and somewhat crisp around the edges, though they lost their beautiful crunch toward the middle of the cakes.

The Packing House has long been known for its old fashioned, which is often voted one of the best in the city. So I was quite surprised to find, when I received my drink, that there was absolutely zero evidence of muddling. Huh. In many cases, that means there’s a bottle of mix behind the bar (a disappointment in almost all cases). Fortunately – mix or not – the flavor of the cocktail was classic and well-balanced with a pleasant sweetness and a fair amount of brandy flavor. In terms of flavor, it was a good representation of this Wisconsin classic.