There’s not much to see in Ackerville, an unincorporated town located just south of Slinger. But when OnMilwaukee reader Jessica Peterson suggested I head to their local watering hole, Sheryl’s Club 175, for a Friday night fish fry, I figured "why not?" After all, a great fish fry is always worth the drive, and I was particularly curious once I read numerous accolades about their potato pancakes.

The bar (and yes, it is primarily a bar) was founded in 1999 and remodeled about 10 years ago. So the look and feel is clean and relatively modern with taupe walls, burgundy accents, pop art and a variety of beer and spirits paraphernalia on the walls. The focal point of the venue is a large bar, which winds around the center of the space. There is a separate dining area featuring high and low top tables on one side and a room featuring pool tables and dart boards on the other. When we arrived at 6:30 p.m., there was a pleasant bustle in the dining room, but no wait for a table. 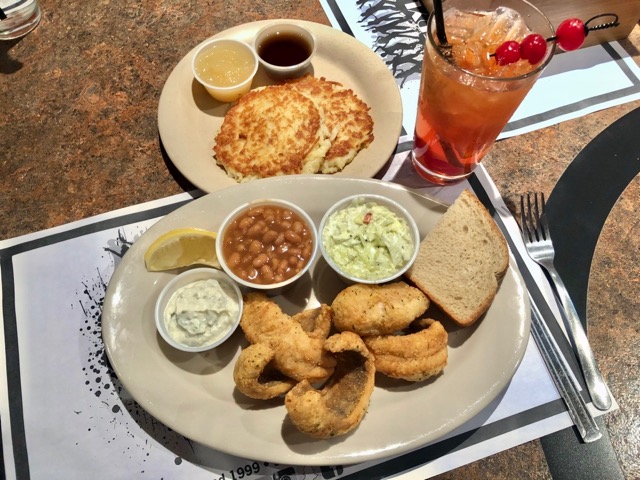 Perch at Sheryl’s sport a light, well-seasoned breading which was pleasantly crisp and nicely browned. The texture of the fish was slightly more dry than is ideal, but it had good flavor overall.

Meanwhile, the cod featured a light beer batter that was quite mild in its flavor. It was less well-seasoned than the perch; but the fish itself was cooked well, with a mild, flaky texture. After tasting both the cod and perch, I was definitely curious about how the walleye stacks up ... but that will have to wait for another trip.

A restaurant will always get big points from me for making its own potato pancakes. And Sheryl’s definitely does. The housemade cakes are served up nice and hot (with both applesauce and maple syrup). You can tell they’ve been freshly made, as they don’t have a wink of that rubbery texture you get when the pancakes are held. The cakes were thick and slightly heavy; but they were also quite tender with crisp edges and a creamy interior. I do like a bit of onion flavor in my pancakes and these fell flat there, but otherwise they were definitely some of the better I’ve tried thus far.

Sheryl’s serves a pretty solid classic old fashioned. It’s served in a pint glass (and no, I didn’t ask for a double). Flavor-wise, it showcases a moderate sweetness that’s balanced by a hint of bitters and a fair amount of brandy.