In this series, we’re trying out some of the city’s most popular fish fries. You’ll find commentary, pro tips and ratings of the three staples of a classic Wisconsin fry: namely the fish, the potato pancakes and the classic Wisconsin style brandy old fashioned. View all fish fry reviews here

If you didn’t know better, you’d suspect that this family-owned sports bar had been in its location on State Street forever. Originally a Muskego restaurant and watering hole, the owners moved their business to the Miller Valley after road expansion forced them out of their Waukesha County location about six years ago. But, it hasn’t taken them long at all to endear themselves to their new neighborhood.

There’s a cozy, welcoming vibe to the place, where regulars gather at the modest bar to unwind after work or compete in a friendly game of darts on the weekend. It’s a popular stop to grab a shuttle to Summerfest or sports games of all stripes.

Spitfires is likely best known for the chicken wings, which come with 20-plus sauce options including citrus chipotle, devils balls and peach heat. But, as I learned last week, it’s a mistake to write off the rest of the menu. 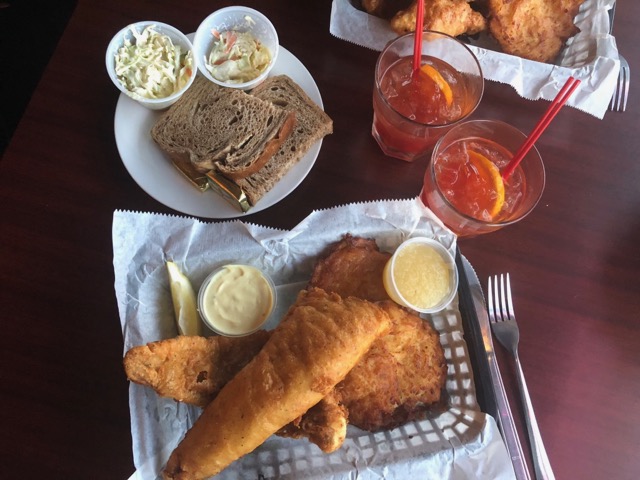 During my visit, the Catch of the Day was walleye, which was available either breaded or beer battered. The latter sported a light crisp batter that clung well to the tender, flavorful fish. My order came with two generous fillets, each of which was perfectly cooked.

Usually I find that one of the fish options is hands-down more enjoyable than the other. However, this wasn't the case at Spitfires. The hand-cut cod was also a win. The basket featured five smaller pieces of fish with the same crisp, flavorful beer batter that was found on the walleye. The flesh of the fish was mild and flaky, and despite the smaller size of the fillets, the fish was plenty moist from edge to edge.

The potato pancakes were housemade and appeared to be made from a combination of both mashed and shredded potatoes. They were ultra crisp on the exterior and very creamy in the center and they were well seasoned: flavorful but not too salty. The cakes themselves were a bit greasy, as evidenced by a small puddle in the bottom of my basket. If that hadn’t been the case, I’d have given them a solid 5.

Meanwhile, the old fashioned was fruit-forward with a balance of cherry and orange at the forefront. There were plenty of muddled bits of orange and cherry in the glass, adding to the fresh, fruity flavor. The balance was slightly off in terms of the brandy/soda ratio, so it erred on the weaker side, but it wasn’t the worst I’ve tried by any means.